Remember just last week when I said I wasn’t going to start on any big projects until I finished the Rowhouse shingles? I’m going back on my word. I want to get the roof on the Victorianna and to do that I need to finish the three rooms on the third floor. The nursery and master bathroom are more or less done so I turned my attention to the master bedroom.

I started by papering and gluing in the sloped roof. 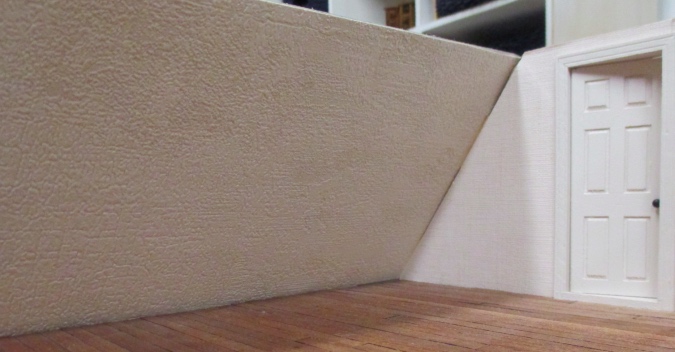 There wasn’t a lot of edge to glue to, so I glopped glue in the slots for good measure. 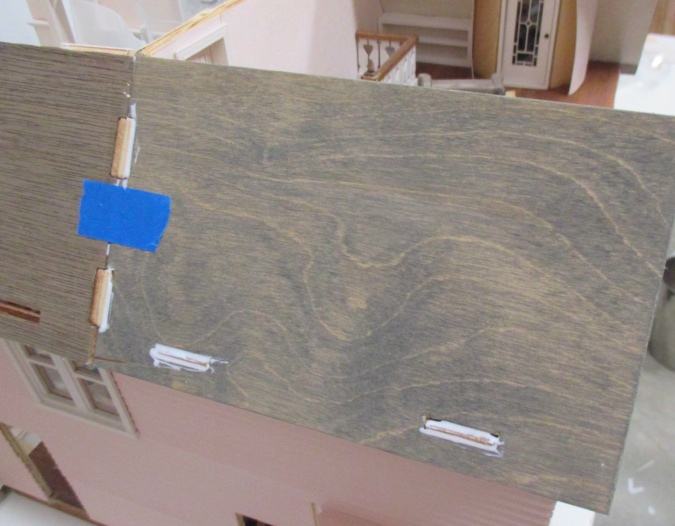 Last year I built a closet to go in this room. The closet is made from a door and a wall that I hadn’t yet glued together. I wanted to add a clothing rod to the closet, which required gluing in the wall but not the door, so I’d be able to reach in to add the rod. 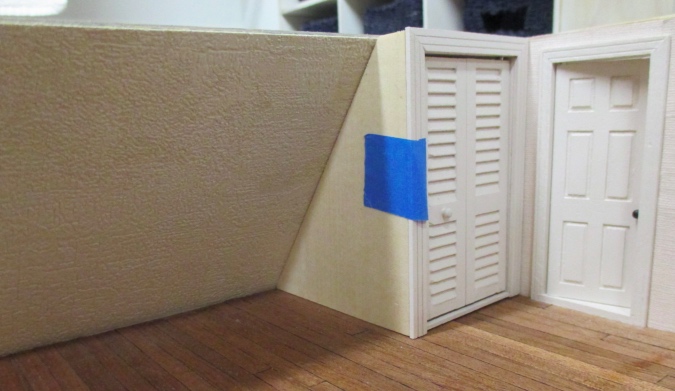 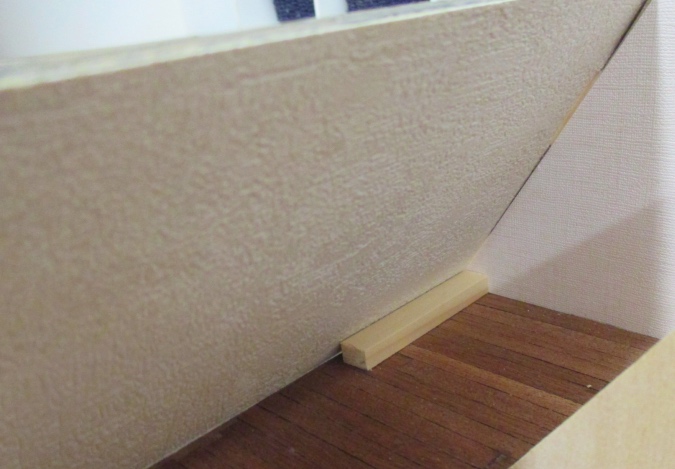 This also blocks a gap between the roof and floor that was visible through the closet door. 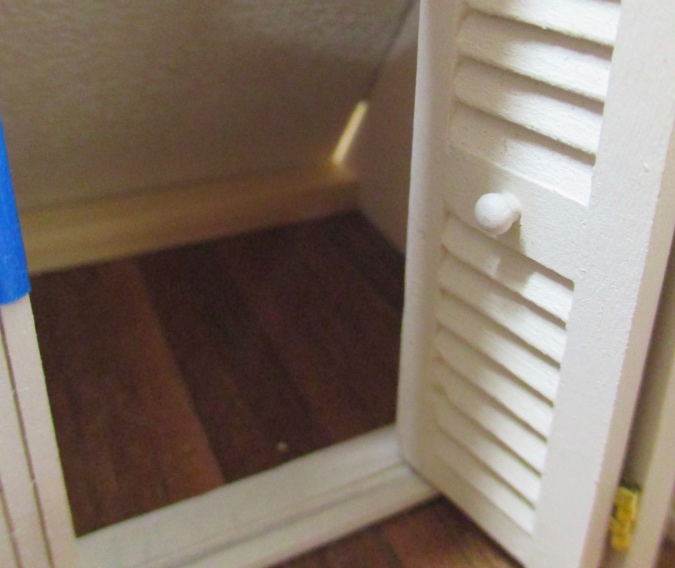 Then I cut pieces to go on the opposite side of the wall. The wall is now wedged between the strip wood, which gives it support. 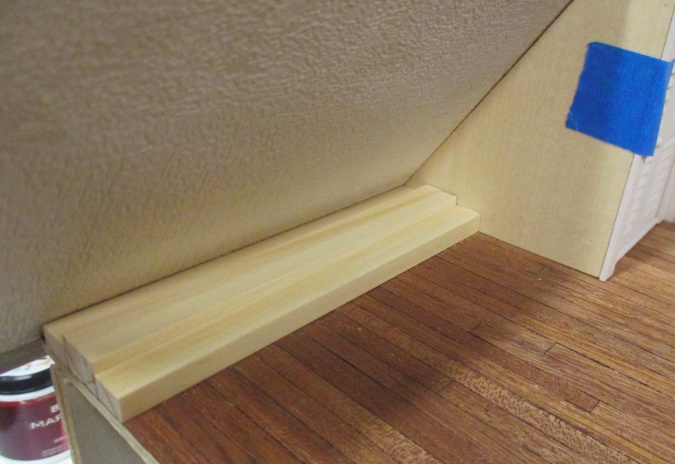 The strip wood also ensures that the knee wall stands up straight, and provides a surface to glue to. 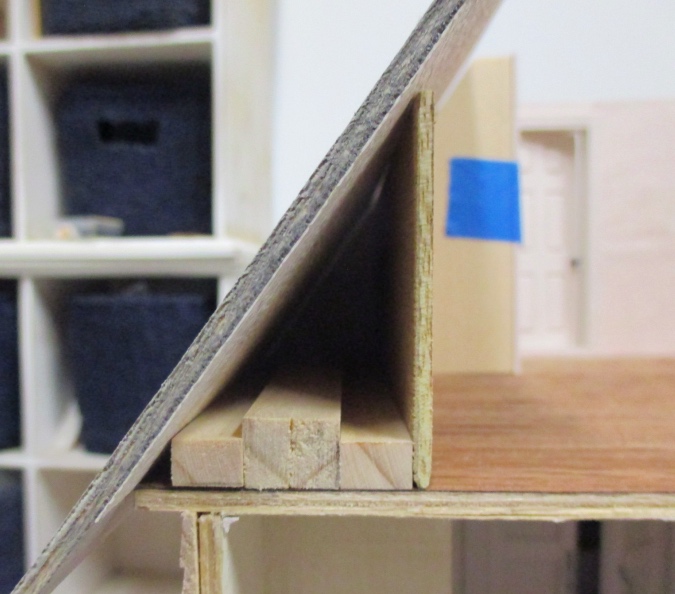 Like on the other side of the house, the triangle behind the knee wall will be covered up with siding. 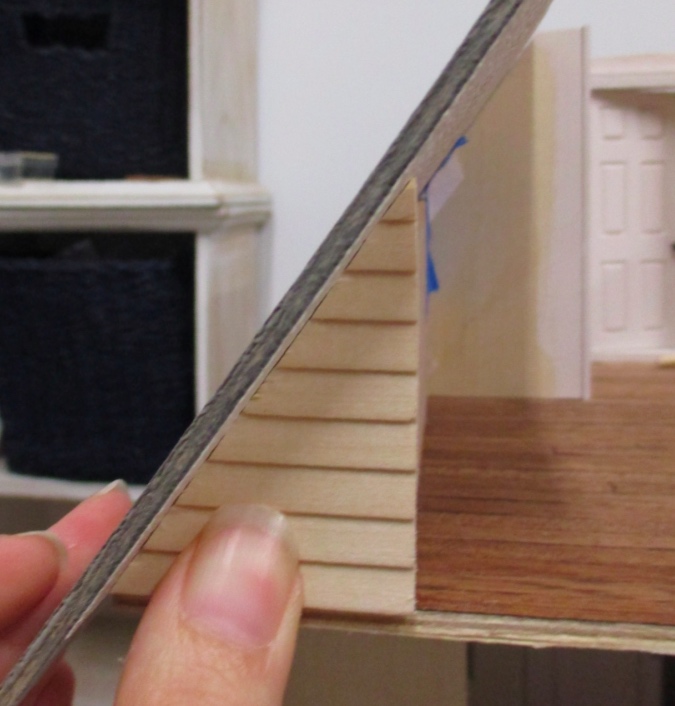 I planned to make a clothing rod and shelf like I did for the closet in the girl’s room downstairs. I’d bought another set of the Northeastern Scale Lumber brackets (which are discontinued and hard to find), but when I opened them I discovered these were a larger style than the ones I’d used elsewhere in the house. 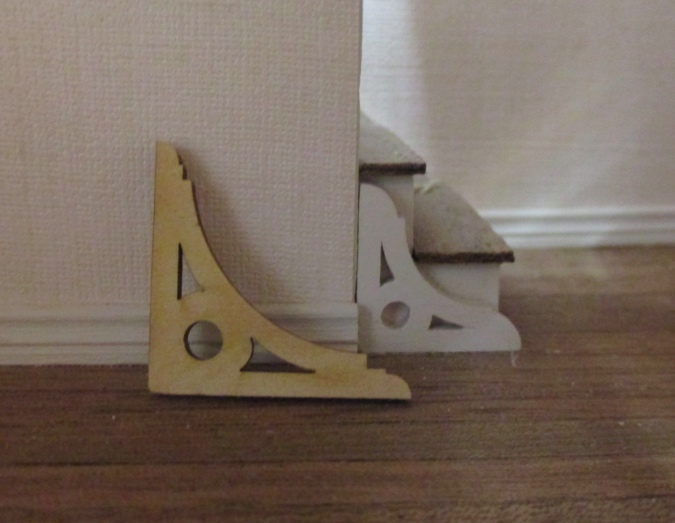 Here’s where the bracket would have had to go to fit behind the closet door. That makes the clothing rod much too low. 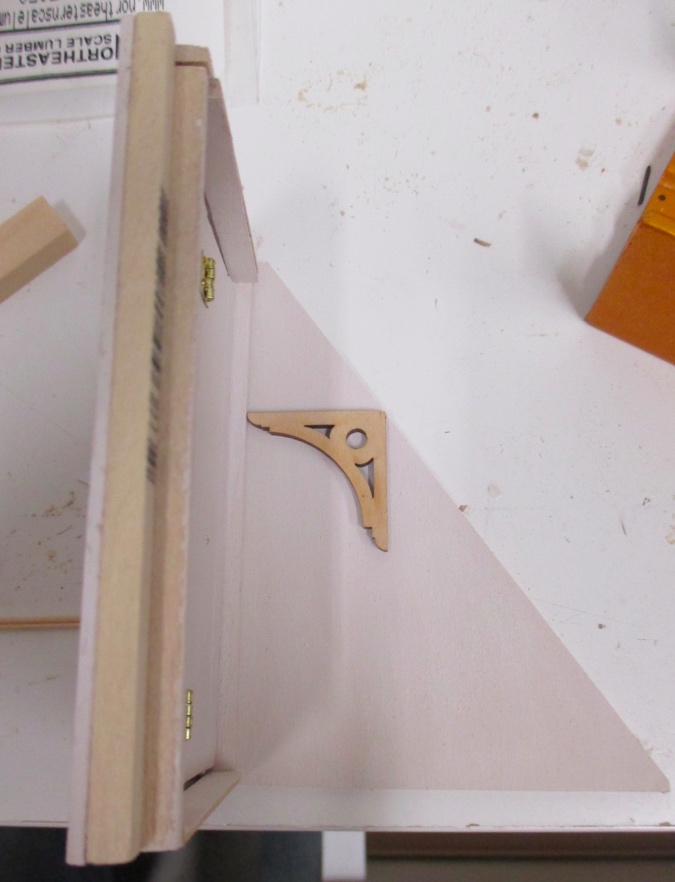 I cut off the ends so the bracket could fit higher up on the wall. 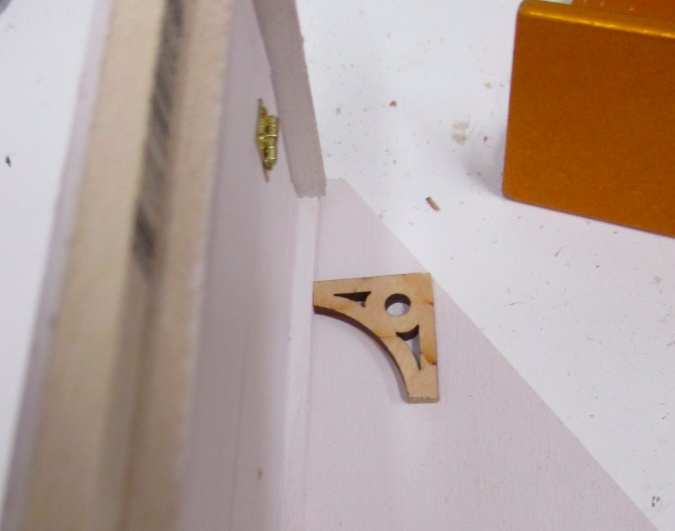 Here’s the idea. A shelf will go on top. 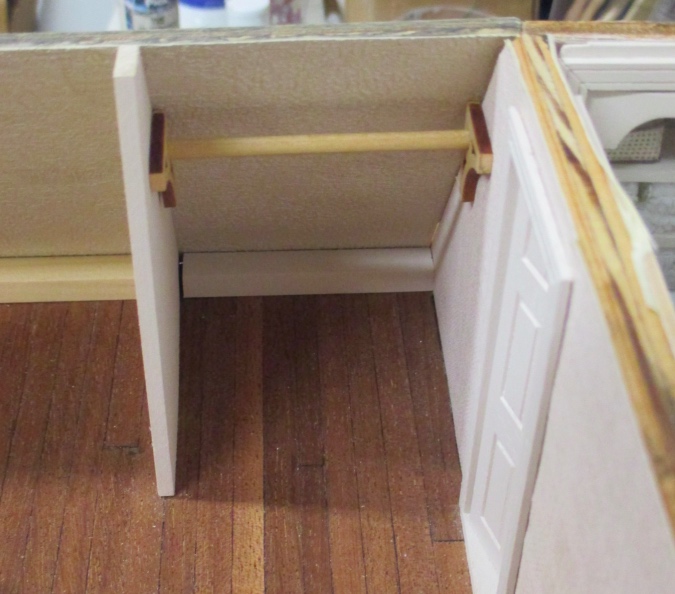 Before gluing in the walls, I traced them on to a piece of wallpaper. The seam at the top of the knee wall will be covered with quarter round. 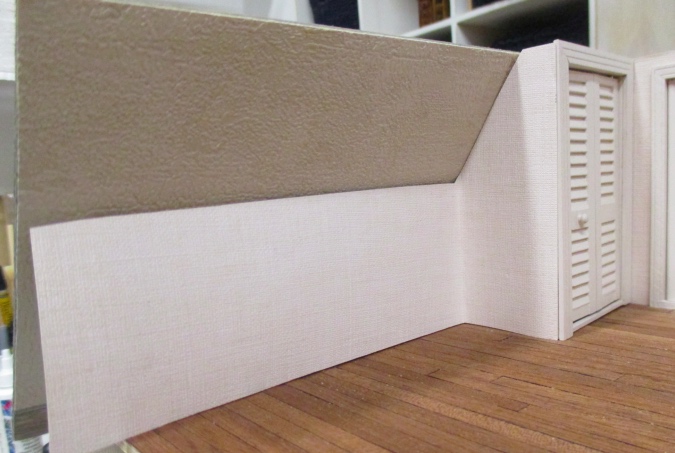 When I cut the wallpaper, I messed up where the diagonal and straight pieces meet – the angle should have continued until it meets the horizontal edge. This resulted in a little triangle of bare wood visible behind the wallpaper. 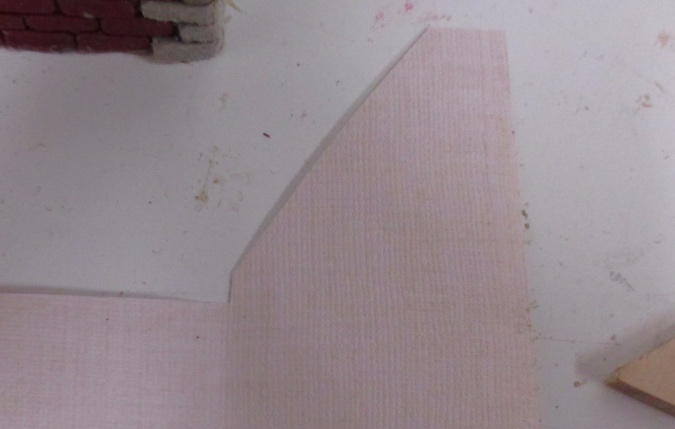 I added a scrap of wallpaper so that bare wood won’t show. 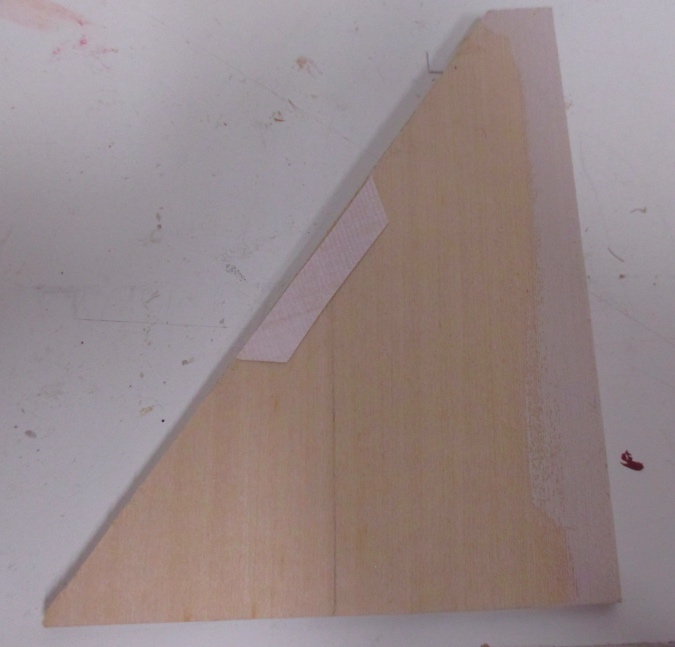 Next I glued in the strip wood and the two walls. The closet door is not glued in at this point — it can be removed by sliding it up. 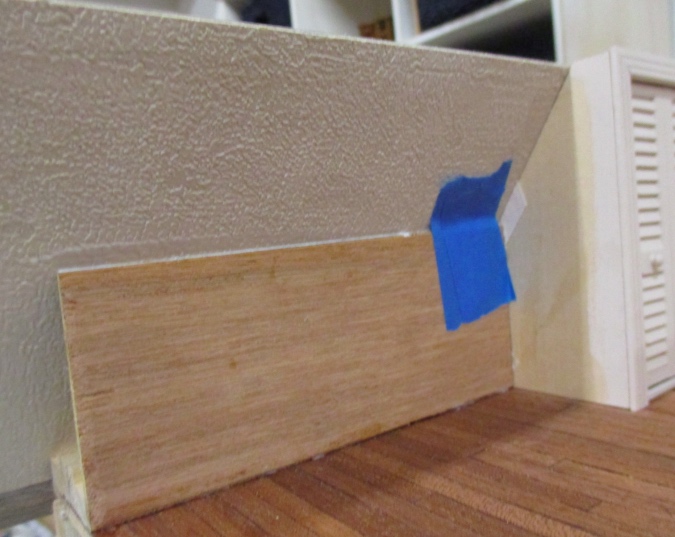 I added one more piece of strip wood behind the knee wall, to give the siding more of a surface to attach to. 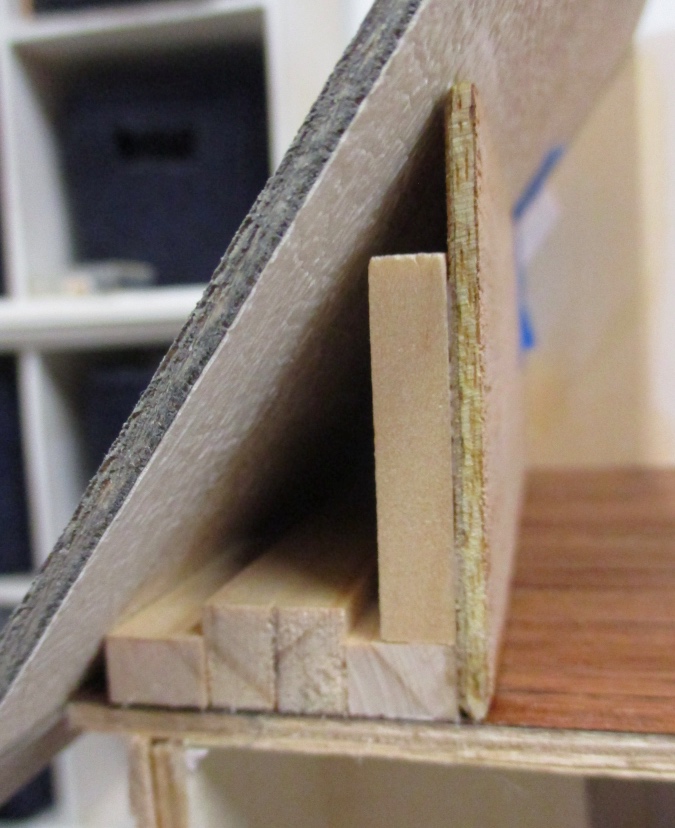 This is not glued in yet (it needs to be painted first), but here’s how that will look. 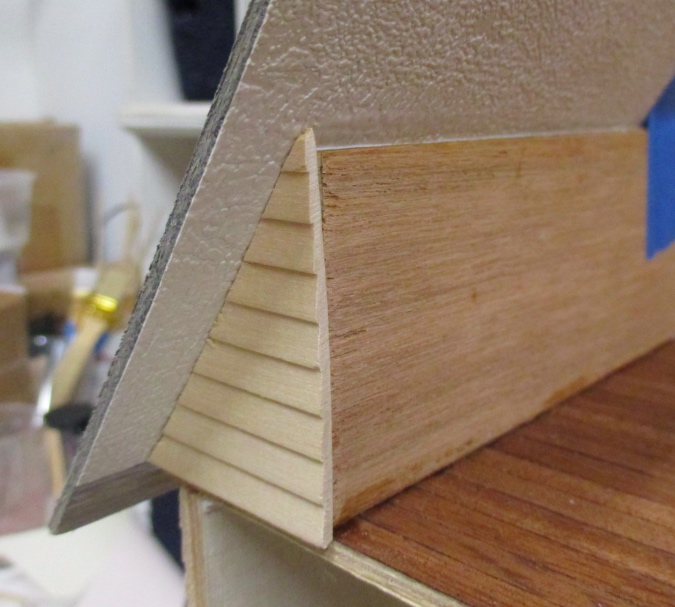 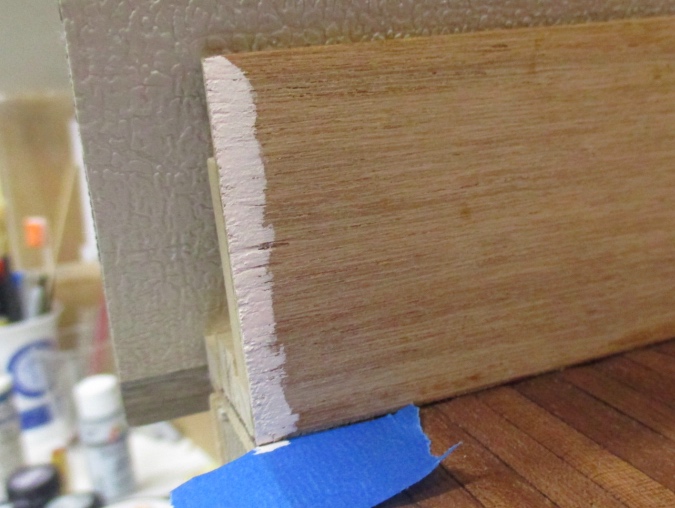 Before gluing in the clothing rod, I made some hangers and clothes to go in the closet. It’s too hard to reach into the closet (and will be impossible once the door is glued in), so I had to do this as part of the closet assembly. I made these the same way as the clothes in the bedroom closet downstairs (you can read about it here).

I tightened the loops of the hangers on the rod so they can’t fall off, and then I inserted the rod into the brackets and glued the brackets to the walls. The shelf went in last. 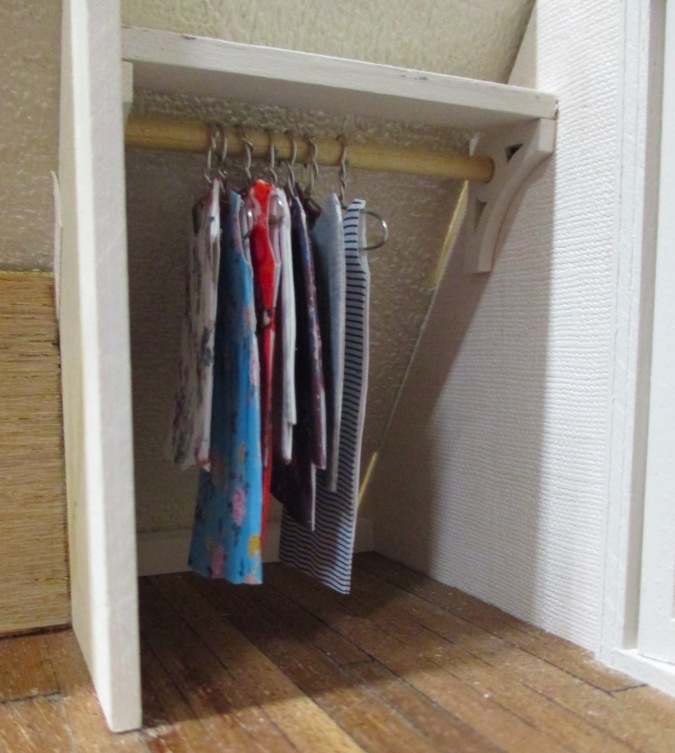 With the closet door open, you just get a peek. 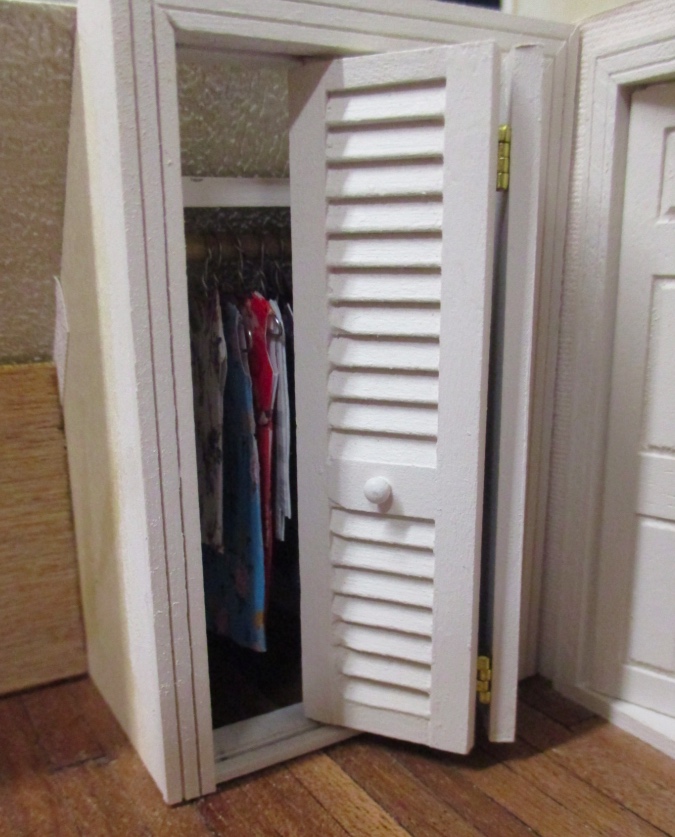 Next I glued in the wallpaper and quarter round trim. 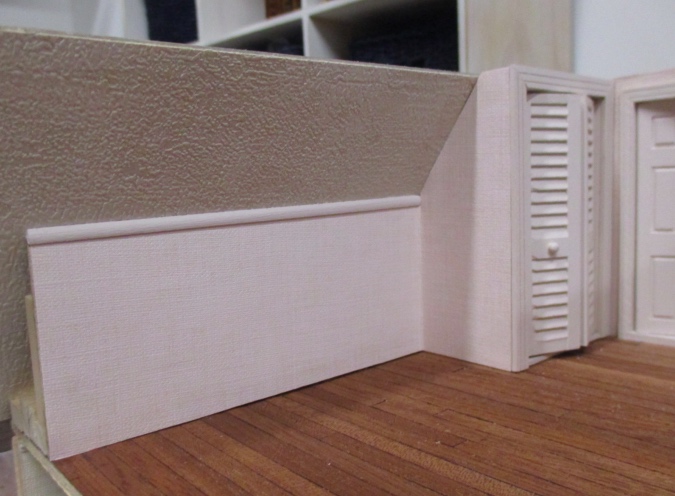 And then I added the (now painted) siding piece. 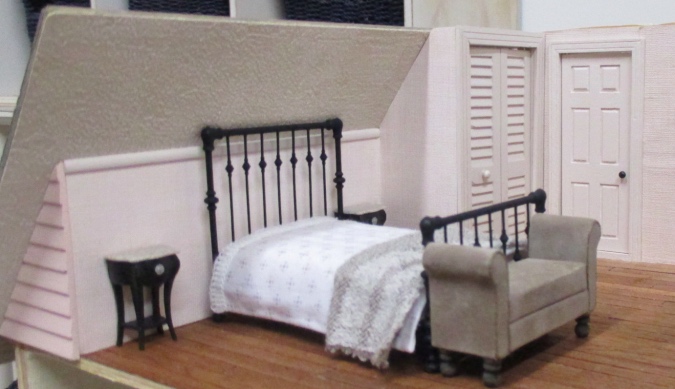 I’d hoped to do the whole bedroom this weekend, but this all took longer than I thought it would! I’ll do the other side of the room next. For now, here’s how it looks with the roof on.