I don’t want to start on a new “big” project until the Rowhouse’s shingles are finished, so I have been building furniture kits instead. This week I finished some for the younger little girl’s room in the Victorianna (not to be confused with the nursery). This room has a built-in toy shelf made from an SDK Miniatures Gothic Wardrobe kit. 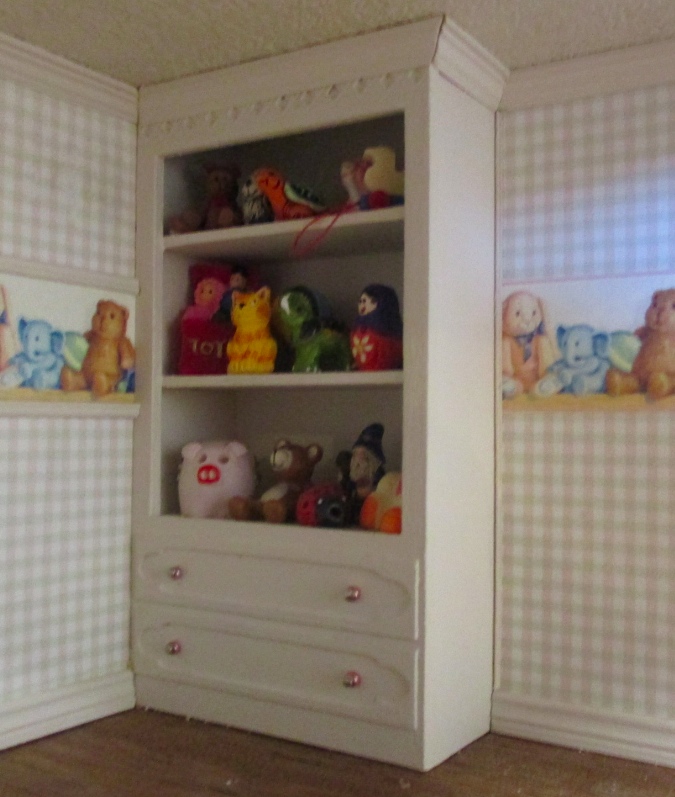 I built some of the other Gothic furniture kits for the Rowhouse bedroom, and at the time I bought some extra panels to use on a Cassidy Creations wardrobe kit to match. (The Gothic wardrobe was too large — that’s why I ended up using it in the little girl’s room instead.) I had some of these panels left over, and used two of them on the sleigh bed I made for this room. I still had some of the small panels left and decided to use them on a tall, skinny dresser to fit in the empty space next to the bed.

I couldn’t actually find a tall dresser in half scale, so I bashed a Cassidy Creations nursery wardrobe kit. Here’s what it’s supposed to look like.

I started by assembling one drawer and used this as a guide to cut the back, top, and bottom pieces to fit. 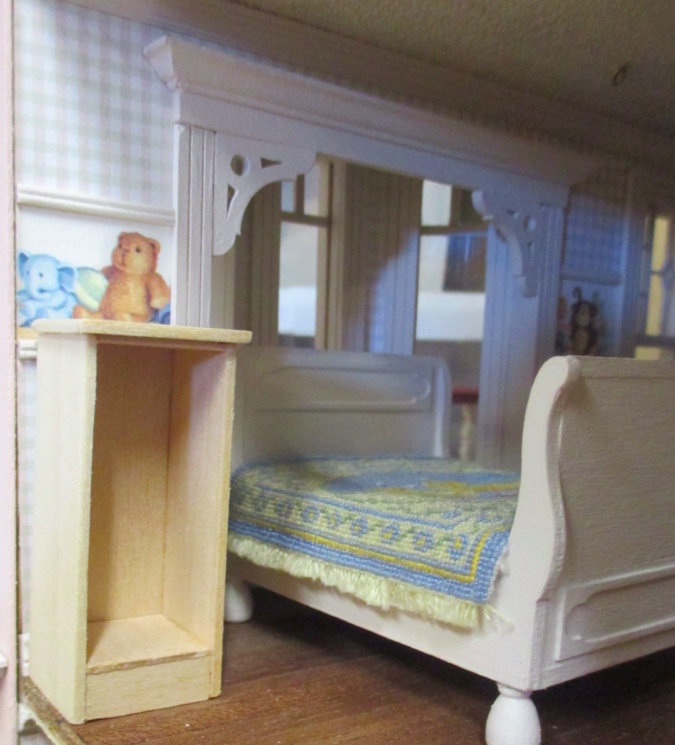 I’m not sure how I messed it up, but once I got everything assembled, the area where the drawers go was too short by the height of one divider. They only fit if the top drawer slid in over the little lip under the top, rather than under the lip as it’s supposed to be. I did some creative bashing to fix this — kind of complicated to explain and I didn’t take any pictures, but can you even tell? 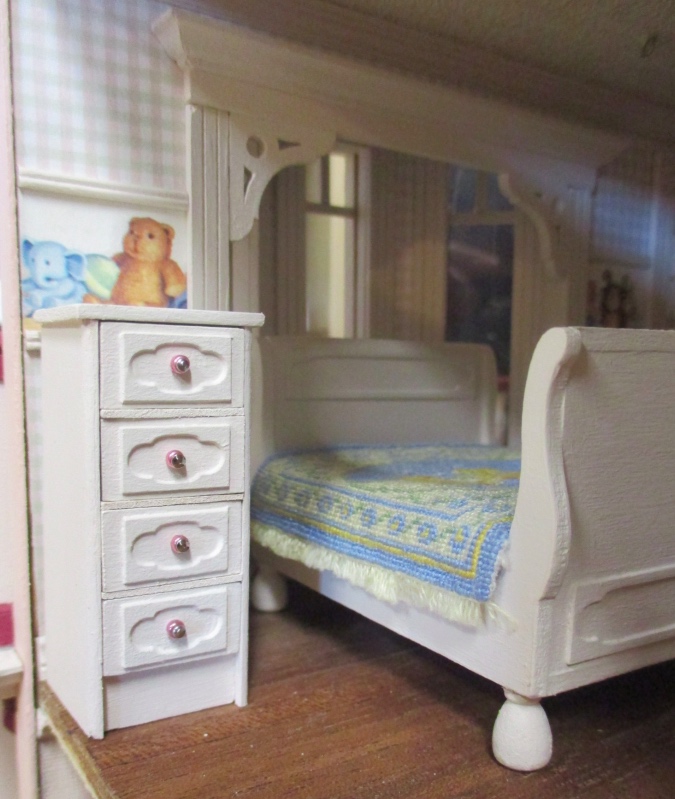 Once I saw it in place, the tall base bugged me. Dressers are usually closer to the ground, and I also didn’t like how it was just slightly taller than the wallpaper border. I wanted to cut down the base but the dresser was too big to cut in the miter box. Instead I used the disc sander to sand it down about halfway (previously it was around 1/4″ and now it’s 1/8″). 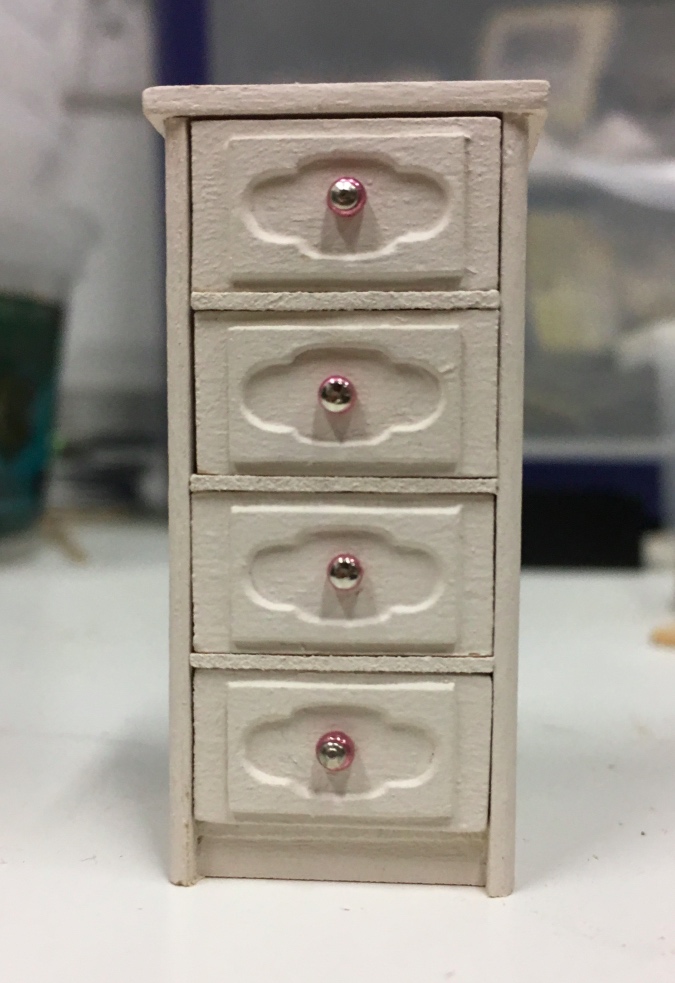 Much better! The drawers are snug, but they do open. Getting the drawers right is always the hardest part of these kits for me. 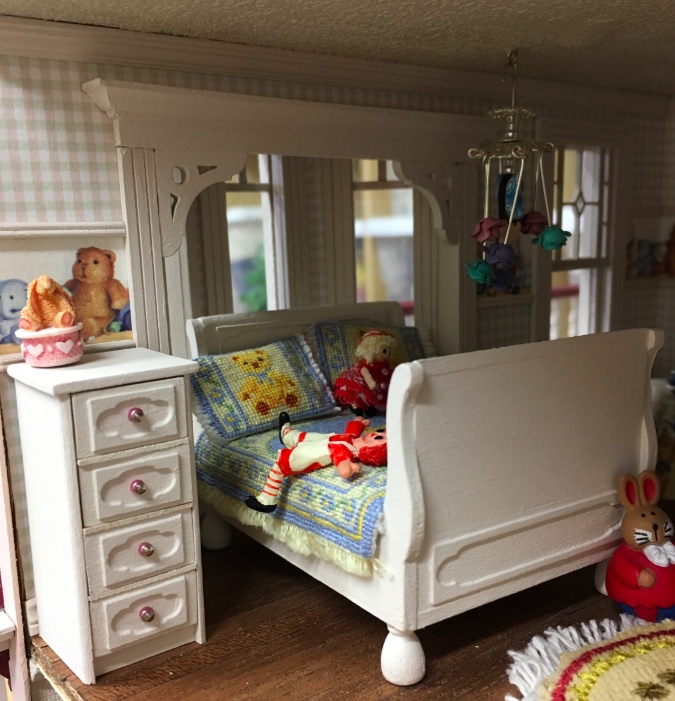 I also built three Robin Betterley “Flutterbye Butterfly” kits — a stool, a push toy, and a dollhouse. These are long discontinued and hard to find. I have a shelf kit, too, but because of the wallpaper border there isn’t a good spot to hang it, so I decided to save that for another time. 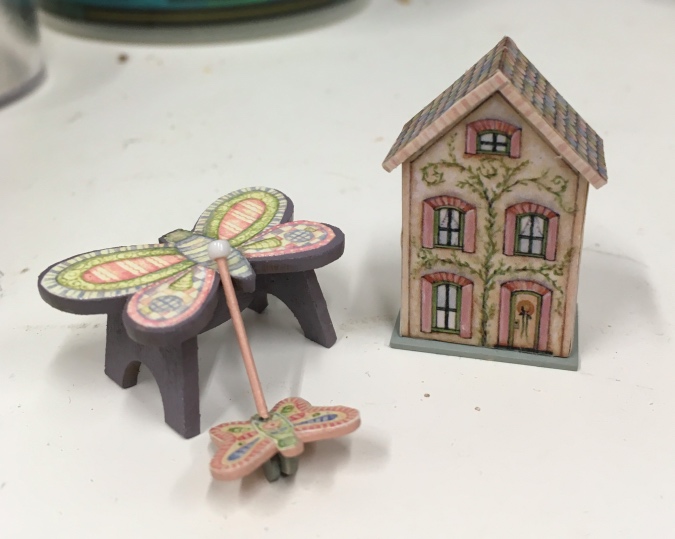 The stool kit was straightforward, but the push toy kit was frustrating. There were no pictures besides one of the finished toy, which seemed to be the 1:12 version — it had a handle piece that didn’t come in the 1:24 kit. Some of the instructions were vague, especially with respect to how to attach the underbody and wheels. (I didn’t take a picture of the underside, but if anyone needs to know how I did it, feel free to contact me!) The wire handle seemed too tall for a half scale child to reach so I cut it down, and I added a bead handle that wasn’t included in the kit.

The instructions for the dollhouse were better. Here’s a shot of the back side. Of course the camera picks up every flaw, but it’s really cute in person. 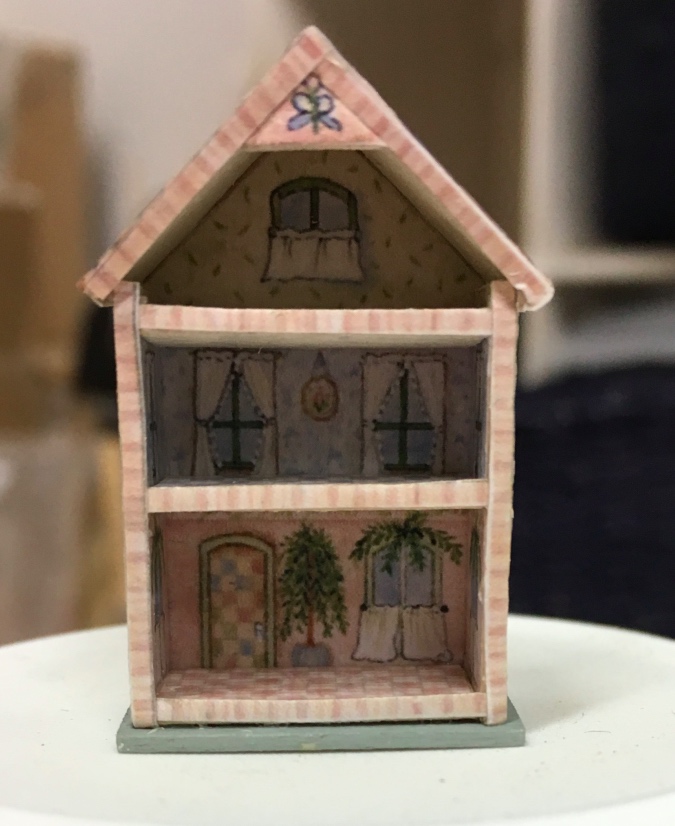 Of course, once I finished them I had to spread the toys around again! I can’t decide if I should display the front or back of the dollhouse. 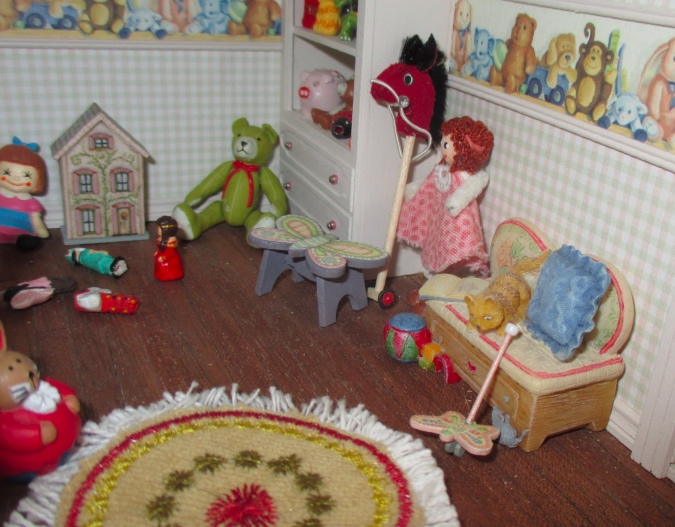