The Visalian, upon which my 1:24 scale Seaside Villa is based, was modeled after a real house in Visalia, California, that burned down in the early 1980s. After my first post about the dollhouse, I was contacted by Judy Lewin, the owner of Mill Creek Miniatures and a former Visalia resident who researched the house in the Visalia library. She was kind enough to send me the info she has, and told me it’s okay to share. 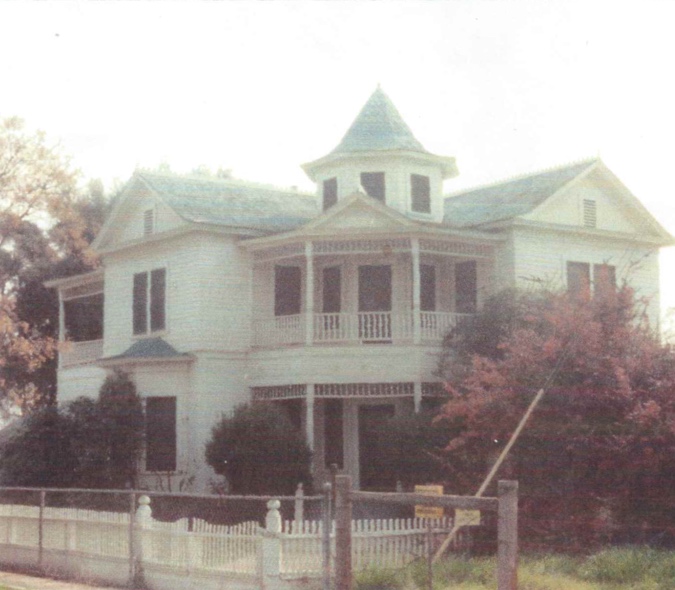 The farm consists of two hundred and forty acres on the Mineral King road, about five miles east of Visalia, where he has made all the improvements, putting up substantial barns and outbuildings, and in 1904 built a nine-room, two-story residence which adds no little value to the property. This is conceded to be one of the finest farm-houses in the vicinity, while other improvements are in keeping. His herds number among them good graded stock, and Mr. Hilliard has ably demonstrated the fact that he understands the work with which he has been so long and so profitably connected. … Near Exeter, Tulare county, September 3, 1884, Mr. Hilliard was united in marriage with Laura B. Teague, who was born in that vicinity, a daughter of John Teague, of Exeter. They are the parents of two children, Carroll Arthur and Effie Elizabeth.

History of the State of California and Biographical Record of the San Joaquin Valley, California

As newspaper columnist Joe Doctor recalled of a visit to the property, the house was located “at what was then known as Hilliard’s Corner, across the road from Deep Creek school and beside what was then known as Mineral King Highway but is now Highway 198.” You can read his memories of Renzi Hilliard and daughter Effie (whose married name was Strobridge) in a column that Judy transcribed from a faded photocopy. 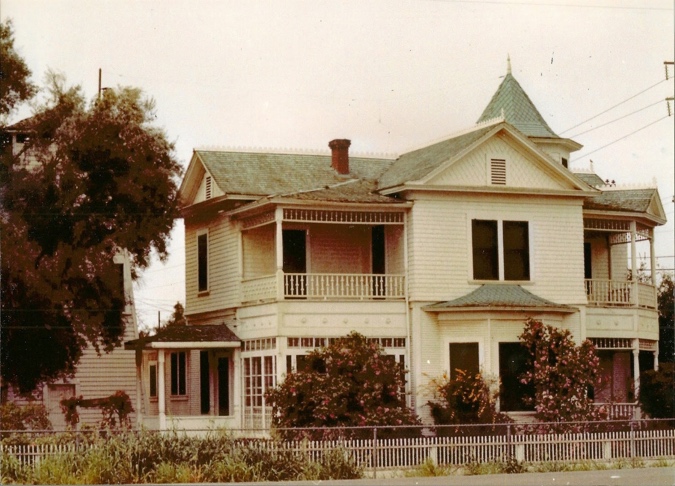 Photo by Bill Dillberg, used with permission from Historic Happenings

Renzi’s daughter Effie was 92 years old and living alone in the house when it burned down in 1983. From another document Judy transcribed:

Fire officials said Mrs. Strobridge was warming a robe next to a range when the robe caught fire. She extinguished the fire in a sink and put the garment on a cushion, but soon saw the cushion smouldering. She took the cushion outside to extinguish the fire with a garden hose. Thinking the fire was out she placed the cushion on the back porch to dry.

Later Mrs. Strobridge observed that the side of the house was ablaze and attempted to put it out with the garden hose.

… The material in the lovely old home, dried from eight decades of San Joaquin valley summers, had roared into uncontrollable flames. The damage was total. Estimated loss was $200,000 to the house [and] $100,000 to the contents, many of which were antique.

The Hilliard house was still standing when Visalia woodworker Howard Hill recreated it in 1:12 scale. The N.A.M.E. magazine Miniature Gazette ran a cover story about the Visalian and Hill’s company, One of a Kind Wood Shop, in their Fall 1982 issue. 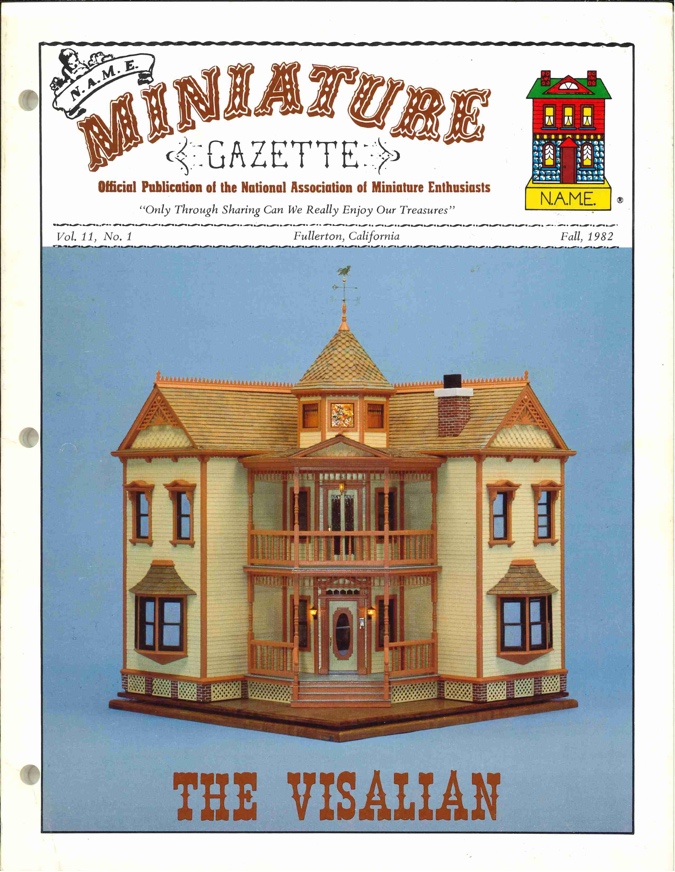 From the Miniature Gazette article:

In 1974, the Hills [Howard and his wife Gloria] decided to open a gift shop. … It was a show room that had everything wooden one could imagine, from salad bowls and snack tables to carvings and chest sets. … Because of numerous requests, the Wood Shop started carrying a line of dollhouse kits. While these kits were cute and somewhat functional, they were in no way to be considered collector’s houses.

… As time went on, miniature furniture and accessories were appearing throughout the store. Then one day, a local service club that Mrs. Hill belonged to, decided to design and build a custom dollhouse as a raffle prize for a charity fund raiser. With a lot of help from Mr. Hill, this was quite successful. By the time a year had rolled around, and the club was ready for another dollhouse, the Hills had decided to conduct a dollhouse design and construction class. The idea being that Howard would build a house along with the class, and it would be donated to the club, for the raffle. The house that Mr. Hill had decided to create was inspired by a lovely old Victorian house located nearby.

An undated newspaper article that Judy found at the library continued the story:

Howard Hill had driven past the picturesque mansion hundreds of times, never failing to detect the subtle beauty and grace of the house peeking out from beneath the hovering ancient shade trees, which seem to be shielding the house from the prying eyes of highway travelers. Lodged in Howard’s subconscious was the design, shape and style of architecture of the charming house.

…The first “Visalian” miniature house was built through a joint effort between Howard and Gloria Hill and a class of 16 miniature enthusiasts. … Because of the difficulty and investment of time involved in building an original miniature house without a kit, Howard has worked up a “Visalian” kit, containing all the pre-cut pieces needed to assemble the framework of the house. The trimmings to the “Visalian” such as shingles, molding, brickwork, electrical wiring and interior decorations are all purchased extra. It is conceivable that by the time a hobbyist completes his own version of the “Visalian” he could spend $600.

Back to the Miniature Gazette article:

The Visalian’s first appearance was in the San Francisco Gift Show in February of 1979 … The response to the house was so overwhelming, the Hills rushed home and wrote an instruction book complete with step by step pictures, had it printed and the house kits shipped within two weeks. By April of that year, they had an extensive line of moldings and trims along with a printed catalog of their products.

… In the last four years the Hills have seen another change to their business, for as quickly as the miniatures had taken over the gift store, their manufacturing had now out-grown the miniature shop. So much so, that as of January 1st of this year [1982] the Wood Shop closed its doors to the miniature shop for the last time and they are now concentrating their complete effort towards the manufacturing of quality miniature products. 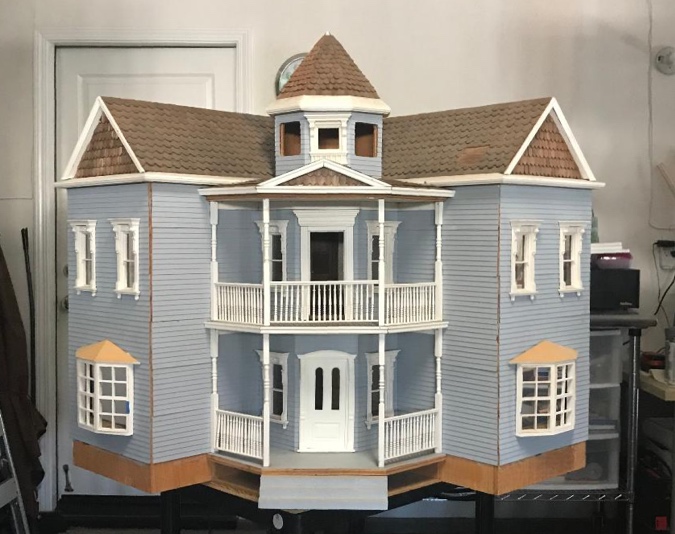 A Visalian-in-progress purchased off Craigslist, photo provided by Susie Mendoza

Sadly the lifespan of the Visalian dollhouse was much shorter than that of the real house. It was listed in the 4th Edition of the Miniatures Catalog (published in 1981) with a suggested retail price of $325 for the kit or $500 for the assembled shell. By 1983 the prices had increased to $379 / $540, and by 1985 the Visalian had disappeared from the catalog.

Debbie Young was working at a miniature shop in San Jose, CA when the Visalian was available from One of a Kind. “The Visalian is my very favorite one inch scale house ever,” she told me in an email. “I was young and didn’t have any money, but I certainly lusted after it. Years later, I was teaching a class at the miniature store in Visalia and several of the women taking the class expressed an interest in having me do a 1/4″ Visalian.” [Note: The class took place at Judy Lewin’s shop, Mill Creek Miniatures, before she relocated to Illinois.]

Debbie got permission from the Hills to produce a quarter scale Visalian kit. This, too, is no longer in production.

Another tidbit from Debbie: “I still love that house. I just came across one at an estate sale. Because it was in 1/4″ scale, I thought it was my kit, but it wasn’t until I got it home that I realized the owner had started building a 1/4″ version from the instructions of the 1″ house. It was almost identical to the one I did.”

The dollhouse I’m working on is not a Visalian, but a Seaside Villa produced by Rocky Mountain Woodcrafts. I don’t know what year this became available but presumably it was sometime after the Visalian was discontinued in the mid-1980s. Norm’s Dollhouse, the Colorado store responsible for the Rocky Mountain Woodcrafts line, closed in 2017, and as of this year the Seaside Villa is no longer in production.

Though the houses have the same basic footprint, the Seaside Villa has a taller tower roof, gable windows, no peaked roof over the upper porch, and no bay windows. 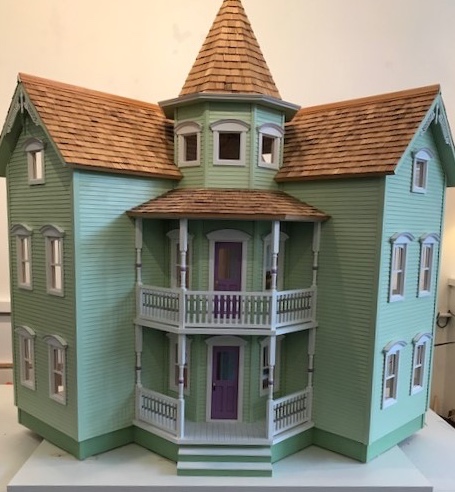 My half scale version has a shorter tower roof (more like the Visalian’s) and full-sized windows in the gables and tower. According to David Nielsen of Rocky Mountain Woodcrafts, the 1:12 Seaside Villa was a big seller but only a handful were made in half scale. 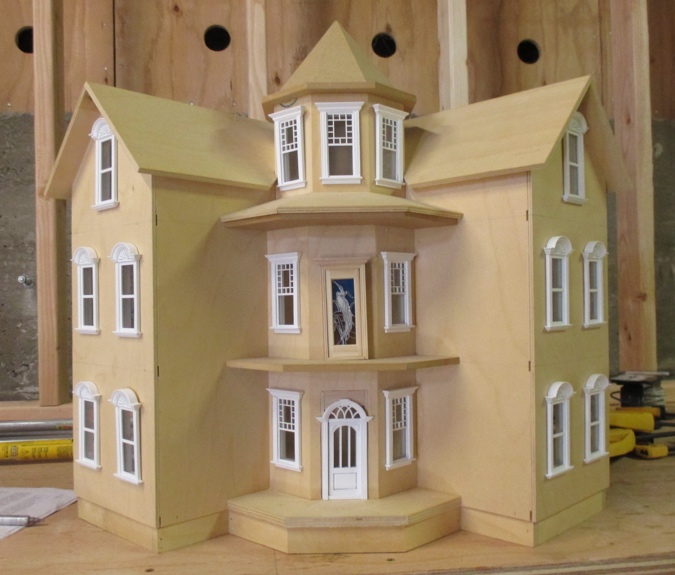 If anyone reading this has a Visalian or Seaside Villa, I’d love to see pictures! Please leave a comment below or contact me by email. You can follow my progress on my half scale Seaside Villa here.