Make Way for Ducklings: The Sequel

Last spring Geoff and I had the pleasure of sharing our yard with a couple of uninvited guests. They were a pair of mallards who enjoyed paddling around our pool (which meant lots of duck poop to clean up) and who made a nest in the ivy, very close to the edge of the retaining wall and only a few feet away from the pool and hot tub (which meant we constantly had to be on the alert for low-flying ducks). I learned that it’s a federal offense to disturb ducks or duck nests or duck eggs, thanks to the Migratory Bird Treaty Act of 1918. So we waited it out, and over Memorial Day weekend, six ducklings hatched and fell into the pool, which they were too small to climb out of. We spent a couple of hours herding them out of the swimming pool and up the hill into the open space behind our house. It was quite an adventure… one we were destined to repeat.

The mallards returned about six weeks ago. Rather than making a nest right up against the edge of the wall, this year it was deep in the ivy, far away from our prying eyes (and hot tub). So we didn’t know if eggs had been laid, and if yes, how many. Until yesterday.

I just happened to be going outside to play ball with Rosy as the mama duck and her twelve (!) ducklings passed by. Even though they were well camouflaged by the ivy, Rosy noticed them immediately and went nuts. I put her inside with a rawhide to keep her busy and went back out with the camera. Just like in the children’s book

, the baby ducks were following their mother in a single-file line. The mother duck was neck deep in the ivy, so at first I could only catch glimpses of the babies as they bumbled around.

Mama duck on a mission.

She really, really wanted to lead them into the pool. After last year’s search and rescue mission, I read that the first thing a mother mallard does after the babies are born is lead them to the closest body of water. I didn’t want a repeat of our difficult experience getting them out of the swimming pool, so I stood between the retaining wall and the pool, knowing she wouldn’t want to bring the babies near me.

Cheaper by the dozen?

After some careful deliberation, the mother duck turned around and led them up to the fenced area at the top of the ivy. There’s a padlocked gate there that I opened so they would be able to pass through. 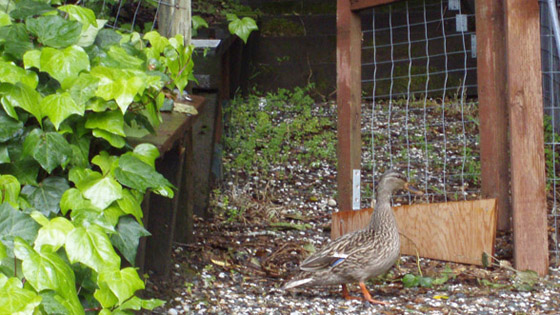 The first obstacle. The babies are huddled in the ivy, scared to follow her off the wall. 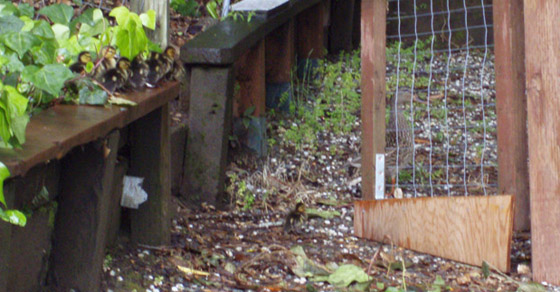 One daring duckling takes the plunge. After this, they started jumping off like lemmings. 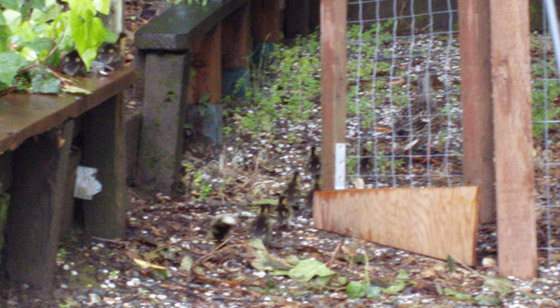 Halfway there. The rest of the brood soon followed.

Once all twelve ducks had belly-flopped off the wall, they dutifully followed Mom to the next obstacle: the stairs. The mother duck can easily jump up these stairs but the ducklings are too small.

Falling into formation behind their fearless leader. 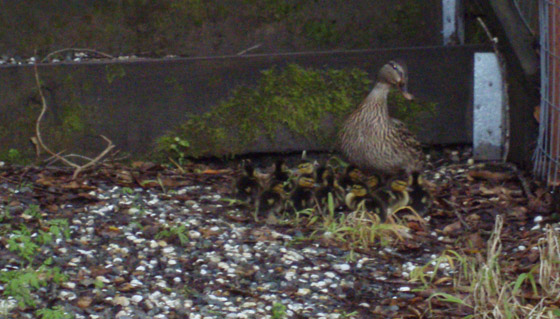 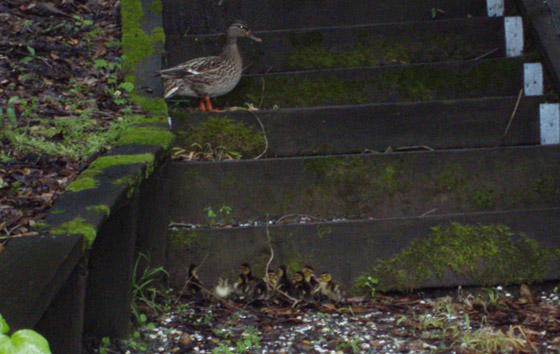 Last year, we helped them up by stacking two-by-fours on the stairs to shorten the distance they had to jump. It was a haphazard process that agitated the mother, which isn’t really what you want to do in this situation because if she flies away, the babies will potentially shoot off in all directions and that’s the end of that. Geoff attempted to scoop them up in the pool net but only managed to get a couple of ducklings up the stairs before the rest of them ran through a small hole in the bottom of the fence and tumbled into the ditch between our house and our neighbor’s. Since it’s been raining a lot, there was a little stream there that the ducklings were swept into.

I didn’t get any pictures of this part since we were busy trying to get the ducks reunited with their mother. Geoff ran around the neighbor’s side of the yard with the pool net and I watched as most of them figured out that they could climb back up the hill to be level with her—except she and the two ducklings still with her were on the other side of the wire fence. Mom and the two babies found a hole to squeeze through and they all met up in the neighbor’s yard. One last duckling was left behind in the stream, squeaking to high hell. Geoff heard it all the way down on the street. The mother kept calling and finally the errant duckling figured out how to reach her.

On the other side of the fence, the family reunited.

What happens next? Hopefully they find some water that’s not a swimming pool. Last we saw them, they were headed up into the open space, which doesn’t have any ponds in it (that we know of) but it’s probably safer for them up there than walking down the street would have been.

So that was exciting. Shall we do this again next year?

Italian Greyhuahua at the beach