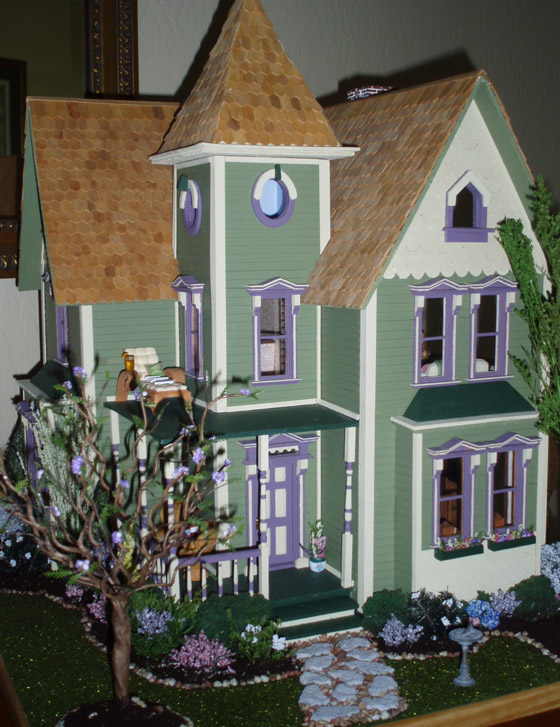 My Fairfield has been in progress for six and a half years, and it’s *this* close to being complete. I have some details to finish (a few baseboards, the upper porch railings), plus I’m still working on furniture for some of the rooms. But even though it’s not quite done, the house has been placed on a base and fully landscaped—with a lot of help from my mom and dad during their visit last week. 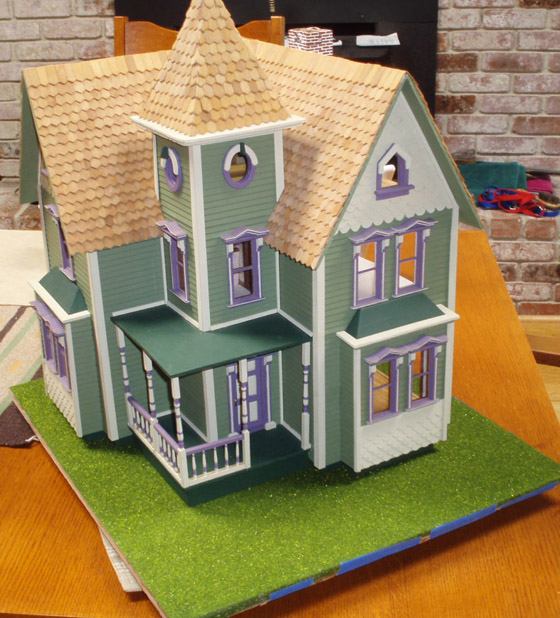 The base is made out of plain old plywood, with trim covering the edges. My dad mitered and attached the trim, which I then stained with Minwax Golden Pecan to match the shingles. The bottom part of the base is covered in felt so it won’t scratch the surface it sits on. 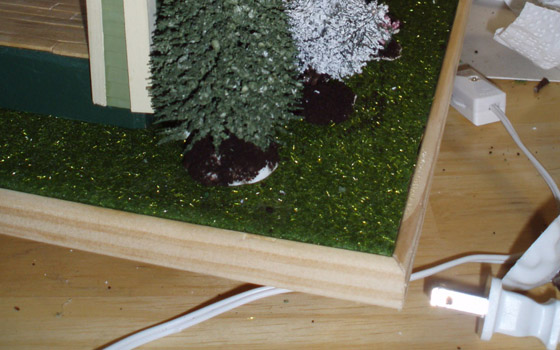 The wire for the lights pokes in through a hole drilled in the base and connects under the kitchen. The house itself is not secured to the base, but I’m not planning to move it unless I really have to, for fear of messing up the plants. (I did remove it mid-project, to take the turntable outside and stain it, and managed to get it back into place without any major catastrophes. But I don’t want to tempt fate!) 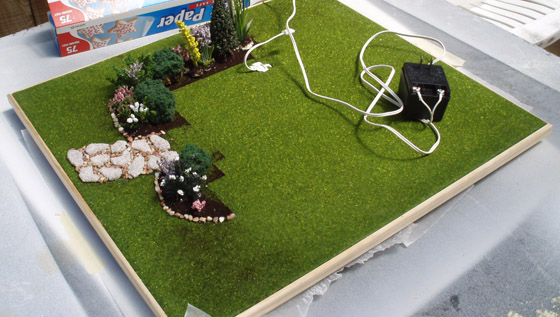 The flagstones in the path and the sundial are among the only items we bought at an actual dollhouse store. Almost everything else in the garden was made using fake flowers from Michael’s and the Dollar Tree. I’ll post another blog this weekend that goes into more detail on how we created the garden, but for now, here’s some eye candy… (Update: the blog with how-to details is here.) 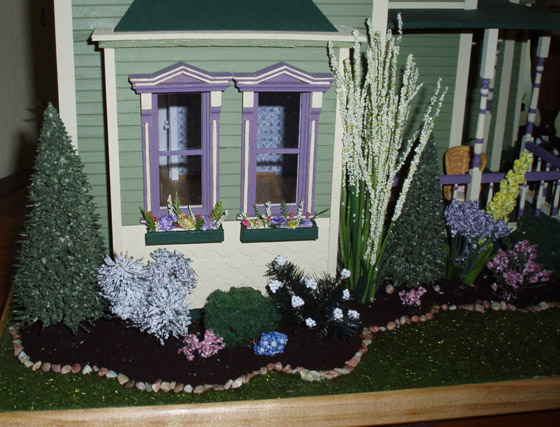 The plants we made include pink and purple azaleas, white rose bushes, globe arborvitae bushes, white hydrangeas, a yellow foxglove, and a bridal veil bush. We also found spots for a couple of pine trees that I got at the dollar store last Christmas. 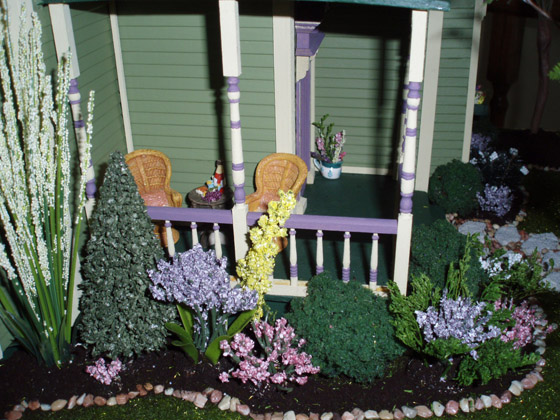 The little rocks bordering the flower beds are from the gardening section at Michael’s. The “soil” is finely ground coffee.

To make the path, I first glued down the flagstones, then covered the areas around them with Mod Podge and dropped in the pebbles. Next I diluted Mod Podge with water and dribbled it all over the pebbles to form a seal. 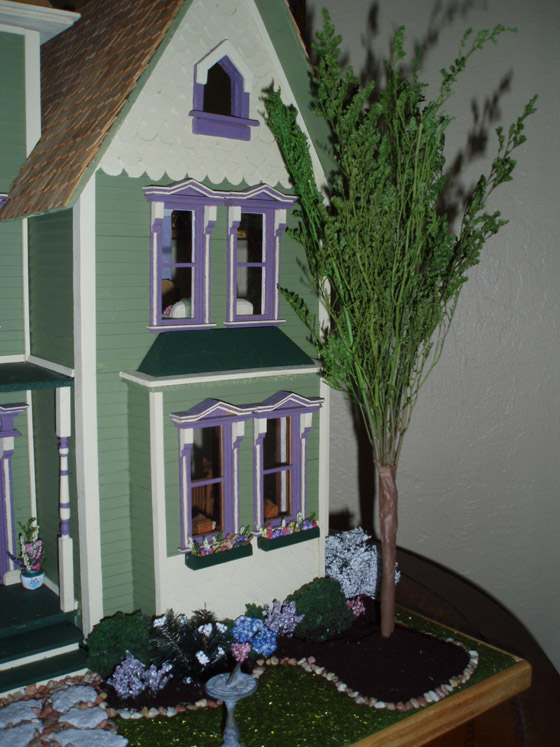 The window boxes are made out of skinny sticks and clippings from the same fake flowers we used for the rest of the garden. The tree (my mom thinks it looks like an elm) is dried caspia basil wrapped with masking tape, which I then painted brown to form the trunk. 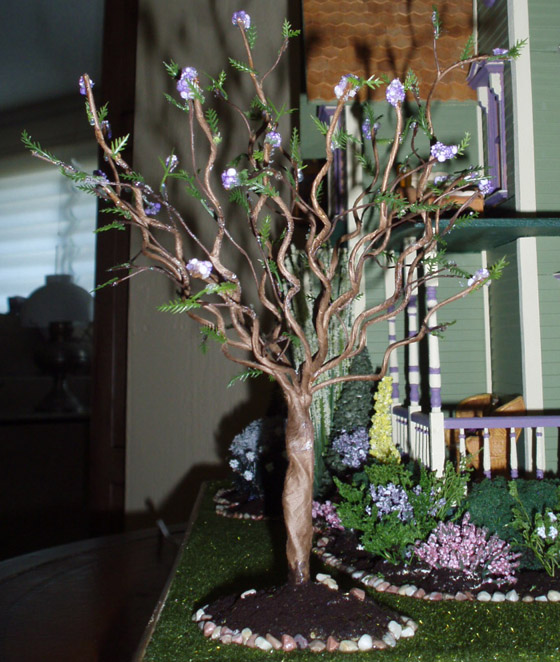 The flowering tree was originally a bare winter tree from Lemax that I got on clearance at Michael’s years ago. The blossoms and leaves are precariously attached with hot glue. My mom did most of them… I tried a few myself and seemed to be knocking off two leaves for every one I glued on, so I gave up. Some trees in my neighborhood are just starting to get their leaves while other trees and plants are in full bloom, so at art is imitating life… 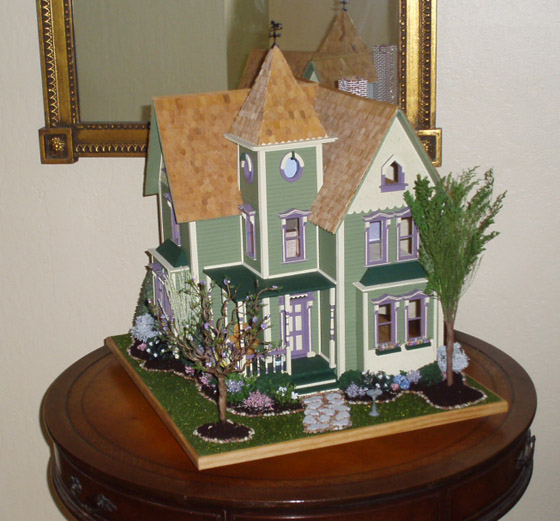 Here’s the finished Fairfield in its new location—right in the entryway, so it’s the first thing that anyone will see when they come in. (After so many years under construction, it’s about time!)

My review of Again: Eye of Providence