My neighbors are on vacation, and they asked me to take care of their chickens while they’re away. 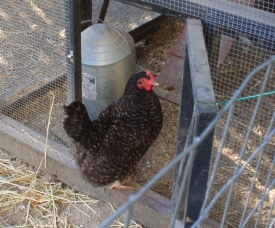 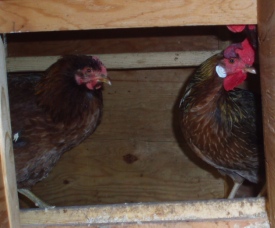 In my youth I spent summers working at the Natick Community Organic Farm, so this isn’t my first experience herding chickens into a coop or collecting eggs. (Little known fact: if you need to pick up a chicken that’s on the move, the easiest way is to grab it by the foot. Geoff didn’t believe me on this until we saw Mike Rowe do it the other night on Dirty Jobs.) What I didn’t necessarily expect is how overwhelming the volume of eggs would be. The six chickens are averaging 4-5 each day, which are quickly adding up! 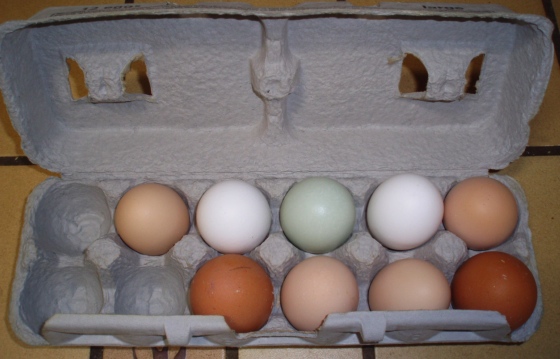 In a Little House on the Prairie kind of way, it’s fun to open the door to the chicken coop and discover warm eggs waiting to be picked up. And they do taste better than eggs from the store. So at first it was like, This is cool, what should we do with all these eggs? Ten days later, it’s more like, Crap, what are we going to do with all these eggs!!! I have two full cartons in the fridge right now, and another week of chicken duty to go.

We’ve tried a few breakfast experiments that were more or less successful. I’ve made myself a dish I’ve always known as “egg in toast,” which my mother used to make for me—cut a circle out of the bread and fry an egg inside the hole. (According to Wikipedia, this unassuming recipe is known by almost two dozen different names, most of which are a lot more creative than “egg in toast.” I feel so naive.) 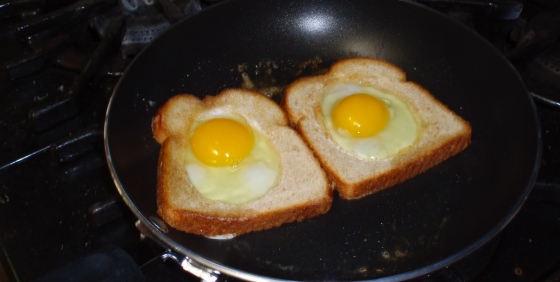 Yesterday we made a Tex Mex dish called migas—scrambled eggs with fried tortilla strips mixed in. We added some canned tomoatoes, chiles, and beans. I’m usually not a scrambled egg fan—and I realize it looks kind of gross in the picture below—but it was really good.

But one can only eat eggs for breakfast so many days in a row before the arteries begin to ache. Normally I’d whip up a big batch of egg salad or deviled eggs, but these fresh eggs aren’t so good for boiling—apparently they need to sit around for a month or so before the shells are tough enough to peel off a hard-boiled egg. We also made chocolate chip cookies that turned out terrible. (Note to self: don’t follow the recipe on the back of a Safeway chocolate chip bag ever again, it’ll only break your heart.) And I’m left with two dozen eggs that need using up, with more on the way, and no idea what to do with them. Quiche? Some kind of decadent dessert? Throw them at the dogs that bark at us when we’re walking around the neighborhood?

If you know of any really awesome egg recipes, let me know. I’m getting desperate.