Recently I stumbled across a Craigslist ad posted by someone giving away a bunch of old computer games. (Okay, I “stumbled across” it by typing “King’s Quest” into Craigslist’s search bar. I do this with alarming frequency. But I usually don’t find anything!) I picked them up today. Sadly no boxes, but I still scored some Sierra manuals I didn’t have yet, plus a bunch of other games from the same era.

First up: Disks and manuals for King’s Quest I, IV, and V, plus the first edition of the King’s Quest companion. 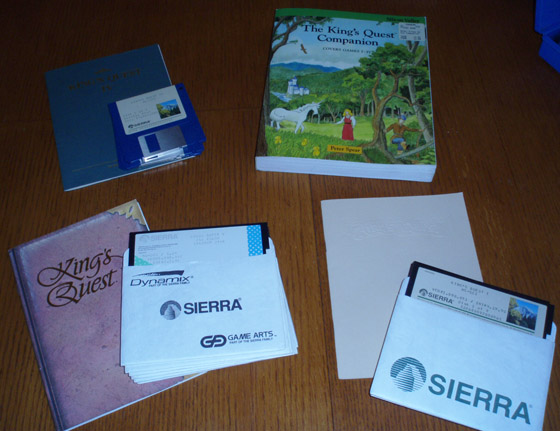 On a whim, I installed KQIV and was thrilled to discover that it’s the rare AGI version! This was the last game Sierra made with their AGI engine, and they simultaneously developed it with the new SCI engine. Legend has it that both versions were released, since Sierra wasn’t sure how well the SCI version would work on customers’ computers, but when it became clear that people were able to play the SCI version without issues they pulled the AGI version off the shelves. The Apple IIGS version that I played as a kid was based on the AGI version, so to me this one is more familiar. (There’s a screenshot comparison in my King’s Quest IV review here, if you’re curious.)

KQV and its manual, I already have, but I’ll hold onto the duplicates. I’m at the point in my life where I can’t bear to throw anything Sierra-related away… this stuff is just going to get harder and harder to find. 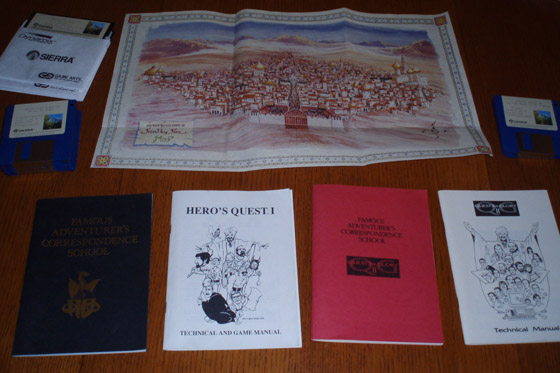 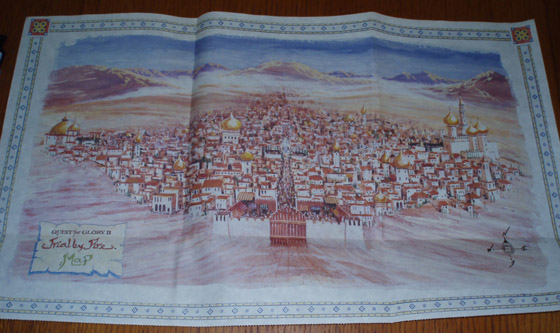 Other Sierra stuff includes Conquests of the Longbow (with a nice full color manual), Gobliiins, the Leisure Suit Larry VGA remake with a one-pager Lost Wages Visitors Guide that details the new icon-driven interface, the Johnny Castaway screensaver (which I’d never even heard of until now), and a couple of generic game manuals. 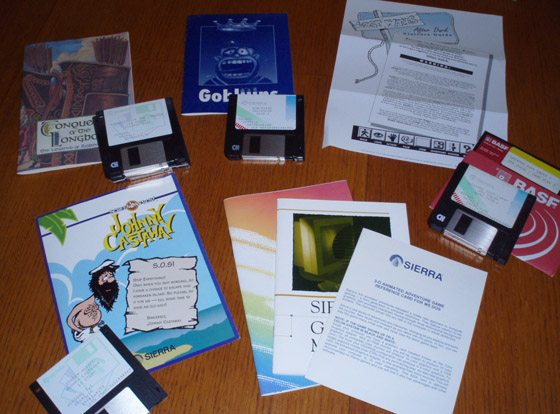 Funny thing: there wasn’t a single LucasArts game in the bunch. I’ve often wondered how I went through childhood as such a big adventure game fan, yet never even heard of Monkey Island and its bretheren until years later. The woman who gave me these games said they’d belonged to her kids, who are my age. The games are all late 1980s / early 1990s vintage… maybe we’re slightly outside the LucasArts age bracket? Or maybe Sierra enthusiasts were so devout and new games were released with such frequency, we didn’t have to look elsewhere? Who knows, maybe it’s a coincidence. But I thought it was interesting.

Moving on, here are a bunch of early Sim games, including the original SimCity (which I had for Mac as a kid) and SimCity graphics disks (which I didn’t). The disks say “Future Graphics” on them; I’m guessing it’s an expansion pack of sorts that adds different types of buildings, etc. to SimCity? Also included: SimCity 2000 on floppies (I have a boxed copy of this, but it’s a Mac version), SimAnt, and SimLife. 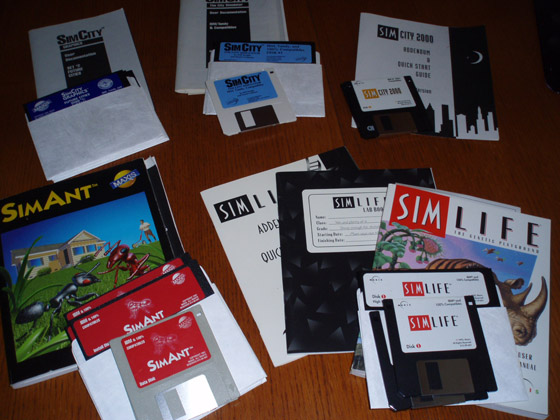 Here’s are a few manuals that didn’t have the games included. In another bit of karma, I have a boxed 7th Guest that was missing the Stauf Files book, so now that’s complete. Dune and the Are You Afraid of the Dark game, I’m not familiar with, but I figured I’d take the manuals anyway. (Packrat, moi?) 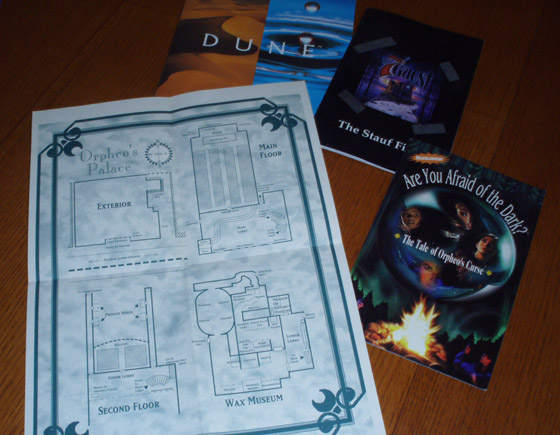 Here are two Might & Magic games, The Hobbit (which might be an adventure game based on the novel?), and an Activision game named The Prophecy, which also looks like it could be an adventure or an RPG. 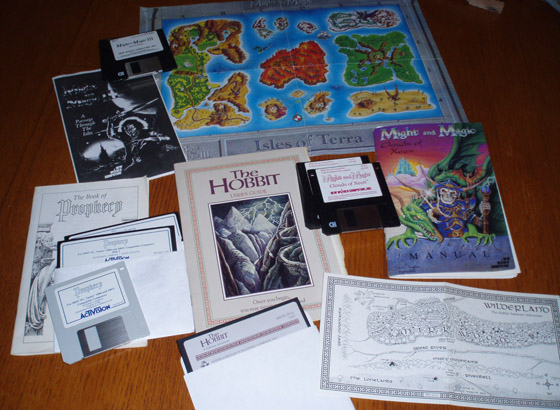 In the edutainment department we have Broderbund’s The Treehouse, Mario Teaches Typing, a couple of Reader Rabbits, and one I’ve never heard of called In Search of the Most Amazing Thing. Also manuals for Mario Is Missing and one of the Carmen Sandiego games, but unfortunately no disks to go with these. 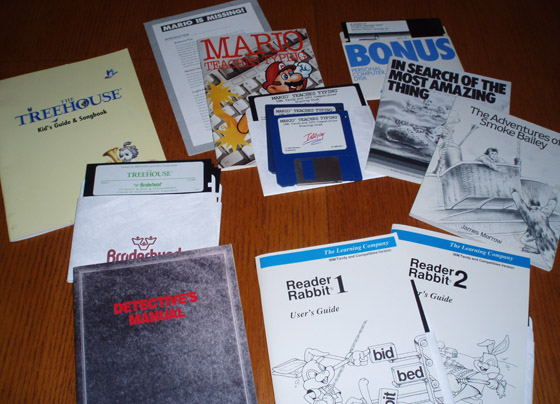 And finally we have some arcade favorites from my childhood: Lemmings, Lode Runner, and Zany Golf (complete with code wheel!) Plus a roller coaster sim named Coaster and Opus ‘n Bill, which I guess is based on the Bloom County comics but I have no clue how it plays. 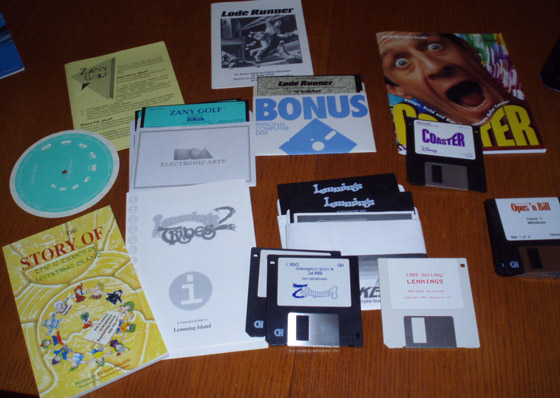 My Christmas morning excitement dampened a bit when I went to turn on my old Windows 98 computer and it didn’t work anymore. I hadn’t tried to use it in over a year, so it’s not as if this is a horrible tragedy, but I did like being able to run old games on an old computer to avoid having to deal with emulators and slow-down programs and whatnot. Luckily my old XP machine (packrat, moi?) does have a 3.5″ floppy drive, so I can try playing some of these. And I’m thinking of adding a 5.25″ drive to that computer to check out the others… at least so I can copy the ones that still work to CDs.

All in all, not a bad score. Now if only Santa would bring me some empty boxes to store these in…

Furniture and built-ins for the Rosedale