Mission furniture kits for the Cypress and Fog roombox

My Cypress and Fog roombox has been sitting, partially furnished, for a long time. This week I built some Mission furniture kits that I’ve accumulated for this house. 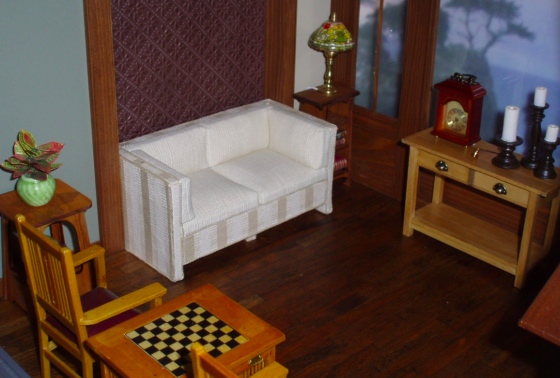 The sideboard is a Daisy House kit, and it’s not quite Mission style, but close enough. I guess I could have added spindles to the sides to make it more authentic, but didn’t want to hassle with it (and I think it fits well enough with the rest of the furniture even without them). It’s a shame the Daisy House has recently gone out of business because their kits are by far the best I’ve ever built. 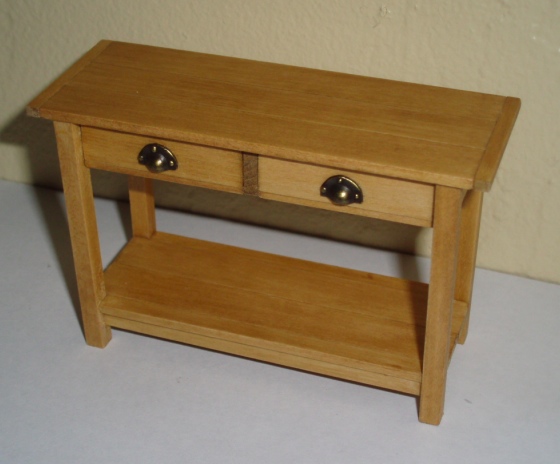 I added the metal drawer pulls. For stain, I used Minwax Golden Oak with a semi-transparent Cabot Oak Brown on top of it. I added a coat of wax which gives it a nice warm shine and makes the wood really soft to the touch. This kit took a few hours to assemble, but the instructions (as usual) were very clear and it went together nicely.

Originally I was planning to put this in the nook where the couch ended up, which is why I went with the lighter color rather than a dark brown. I decided to put it under the window instead, but I still think it looks good against the darker paneling. I had the idea to set out a bunch of liquor bottles and glasses like you’d see on a sideboard in Mad Men, but ended up dressing it up with this (working) mantle clock and (not working) candles instead. 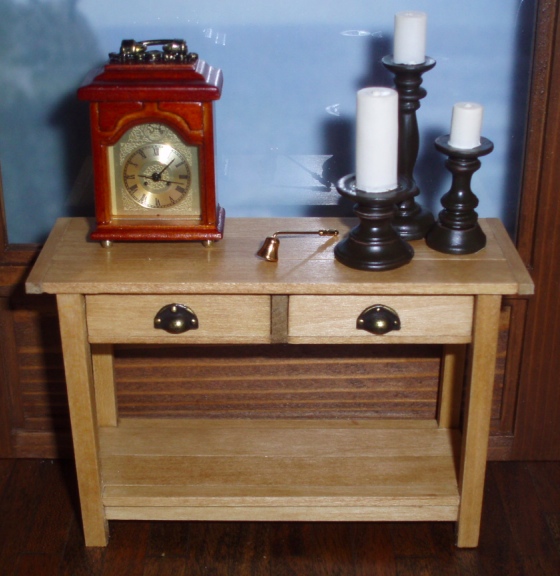 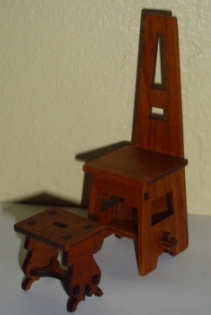 Next came some laser cut kits from Kari Bloom’s Miniton Miniatures. When I ordered these (maybe a year ago now), Kari said the kits would be discontinued, and her website is currently down for maintenance. So I don’t know if they’re available anymore. It’s a shame because the kits were wonderful to put together, for the most part.

I’d put this chair and footstool together a while ago, but the stain (Minwax Golden Oak) was looking kind of drab. I added a second coat and then a coat of satin varnish, which gives the pieces a nice subtle sheen.

I think the wood in these kits is cherry; it has a really nice, small grain that looks good in scale. The wood is darker than basswood, so the Golden Oak stain comes out more brown than usual.

The two I had left to build were a magazine stand and a side table. For some reason I had it in my head that the magazine stand would be more like a bookcase, but it’s actually about the same height as the table. The pieces basically snap together with little “pegs” at the edges of the shelves fitting into holes in the sides. This one was very easy to build. 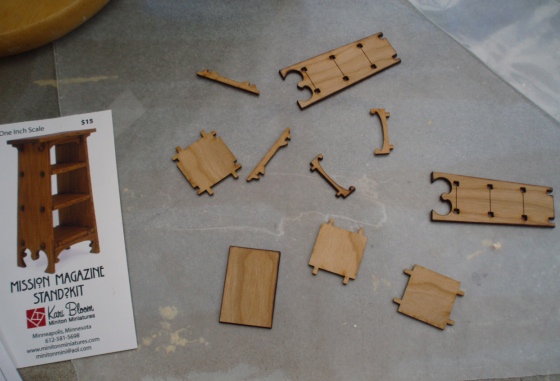 The table was a bit trickier. The four sides slipped around a lot as I tried to get the angle right. In the end it worked out, but this one took more patience. I’d still recommend it, though… the laser cut wood is awesome to work with and these kits assemble more easily than most kits out there, with a really stylish result. 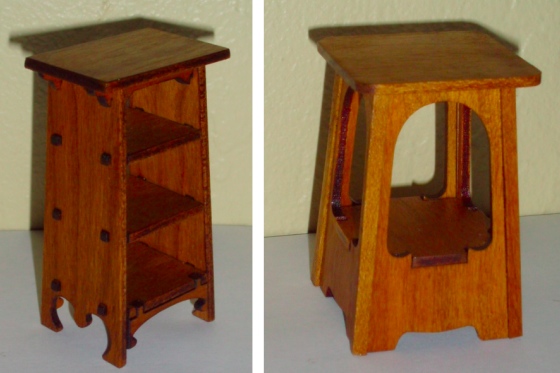 And here they are accessorized… 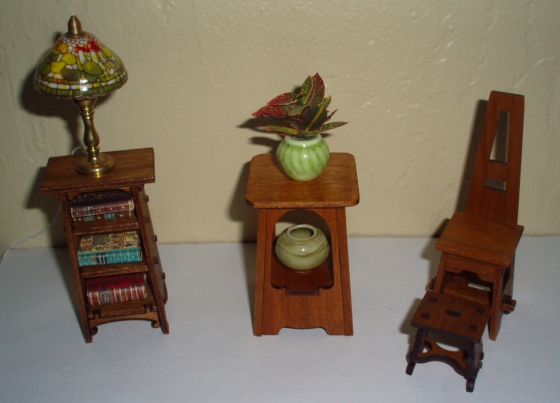 I had envisioned the table between the couch and the wall, and the magazine stand in the front corner of the room, but when I saw how short the magazine stand was and how wide the table was (it barely fit), I decided to swap them. I probably could wire the lamp into the roombox’s electricity, but not sure yet if I want to hassle with it. For now the wire just coils up behind the couch. 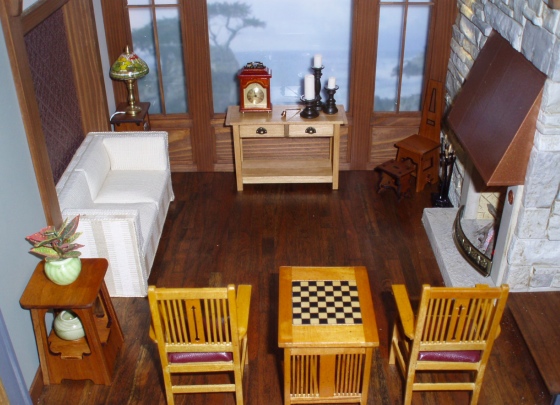 A while back I bought a couple of Bespaq Mission pieces for this roombox, but don’t think I ever showed them off here on the blog. Here a close-up of the chess set. 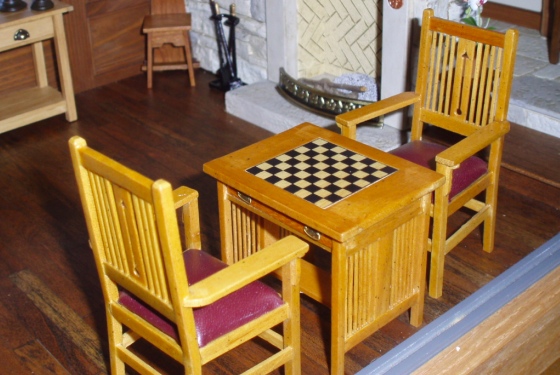 And the hall chair. I stitched the art deco lady from a pattern in Miniature Embroidery for the 20th Century. 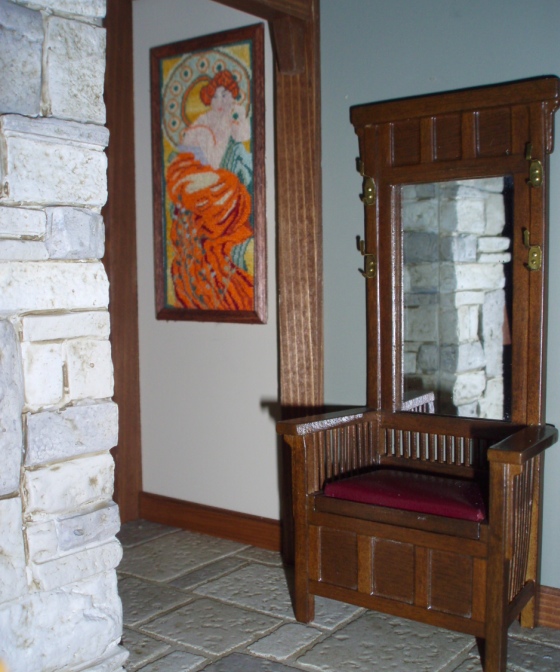 I still have a few additions planned for this room. I’d like to put a Mission style mirror over the couch, and this design seems like it would be fairly easy to do.

I’m also working on a circular rug to go on the floor, and will add matching pillows to the couch. A long time ago I started stitching an art deco panel complementary to the one in the hall… maybe now I’ll finally finish it and put it on the wall over the side table with the plant. Here they are in progress (not actual size, in relation to each other!) Both of these designs are from the same book I linked to above. 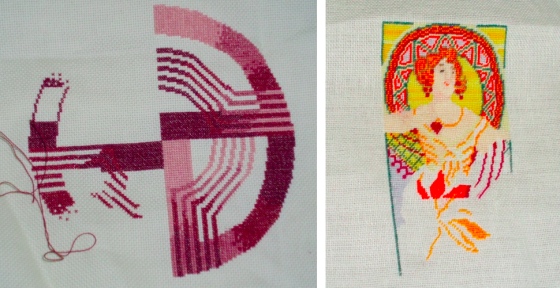