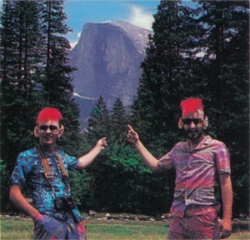 For the past few years I’ve been chipping away at the Sierra adventure game series for the retro section of UK magazine Games™, and the tradition continues in issue 135 with Space Quest. On newsstands now!

The original Guys from Andromeda, Mark Crowe and Scott Murphy (pictured here on vacation in Yosemite), along with “new guy” Chris Pope, gave me really great interviews for this piece — so great that even after finagling two extra pages out of the magazine I still couldn’t fit it all into the feature.

The piece focuses on Space Quest with just a brief discussion of their new Kickstarted game, which meant that most of Chris’s interview didn’t make it in. So, I’ve included his answers below the jump for completeness.

Space Quest was the first Sierra series to debut after King’s Quest, and the idea for it was born when Mark and Scott, working together on The Black Cauldron, started riffing on “wouldn’t it be funny if?” scenarios that would never make it into the high fantasy, family-friendly world of King’s Quest. They built a 4-room demo set on a Sarian space ship, convinced Ken Williams to take a chance on a sci-fi game, and the rest is (Andromedan) history. Hearing their making of stories gave me a new appreciation for this series and made me really excited for SpaceVenture! 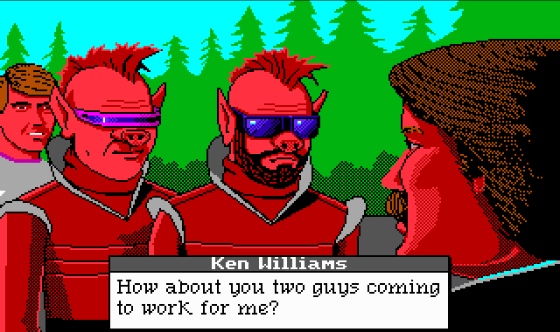 Issue 135 is on sale in the UK now, or you can buy the print mag online or get it digitally. As an added incentive, this issue also has a nice piece by Ron Gilbert on his thoughts about LucasArts’ closure.

Read on for the interview with Chris Pope! 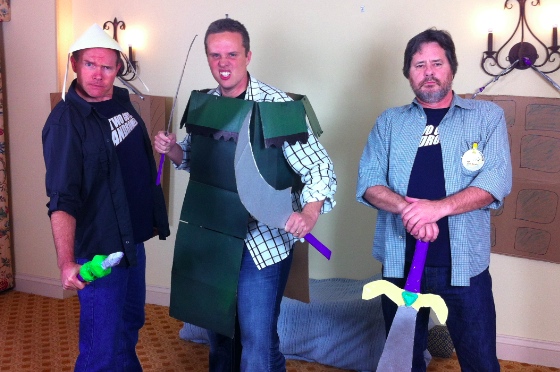 Were you a Space Quest fan growing up? Do you have any particular memories about any of the SQ games?

Chris: Oh I was a massive Space Quest fan growing up. In fact Space Quest 2, around 1987, was the first Sierra game I ever played. I remember it well, I was over at a friend’s house at the time and he showed it to me. I remember thinking the graphics were awesome and my friend allowed me to play through the beginning where you get to walk up the side of the spaceship wall. The moment I saw Roger walking up that wall and then upside down, I was hooked! Every birthday, Christmas, and any other chance I could beg my parents into buying me a Sierra game, I did! I played the Space Quest series, Kings Quest series, Police Quest series, Quest for Glory series, and even the Leisure Suit Larry series… although I only had a pirated copy of that. Those are just some of the main quest games, I played many many more of their games, and was even a member of The Sierra Network, which later became the Imagination Network.

What is your background in the gaming industry?

Chris: I started working in gaming in rather a different way than most people. For years now I’ve worked with lots of different actors on their web publicity, doing social media publicist type work. This involves a lot of one on one time talking back and forth with them and others to help their web image reach out to their many fans. Because I am such a video game fan, I always kinda leaned more towards voice actors, but more importantly, voice actors in video games. It wasn’t long before I was working with some of the biggest names in videogame voice acting, including people from Valve games, Blizzard games and many more. So a lot of the promotions I was involved in were directly involved with getting fans excited about the people doing all the amazing voices in the games they love. On top of all that, through the podcasting network I started years ago, The Tech Jives Network, I was producing weekly audio podcasts to help in the promotions.

How did you get involved with Mark and Scott in the new Guys from Andromeda LLC? What’s your role at the company?

Chris: A couple of years ago, I hooked up with Scott involving his website. We instantly hit things off and became good friends. Scott only lives about four hours from me, so we even had met up and talked, as well as he met my family and all. For about six months we talked back and forth while I worked on his web presence. My plan was to help slingshot him back out there to fans. Secretly I had even planned to try and connect Mark and Scott back together. Even though, I honestly had no idea how to get in touch with Mark at the time.

In early 2012, the Kickstarter movement began with Double Fine. I knew then and there that now was the time to act. Well, apparently I wasn’t the only one, because shortly after, Mark Crowe got in touch with Scott and they patched things up. Scott introduced Mark and I and we instantly hit things off. Shortly thereafter, Guys From Andromeda LLC was founded with Scott, Mark, and myself as co-owners.

My role in the company in the beginning was to use my social media promotions skills to help get the project funded. After funding I have been playing the role of the Producer for the game a lot of the time, while still managing the promotions and the business sides of things. 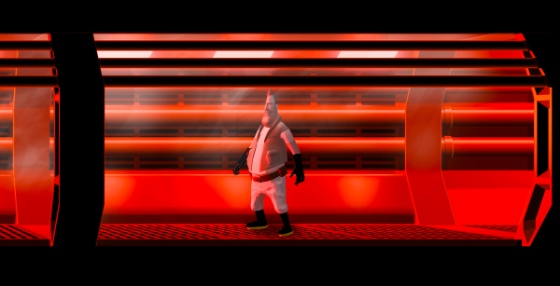 An early screenshot from SpaceVenture

Was the response to the Kickstarter what you expected? How do you feel about the outcome? Would you turn to Kickstarter for a project like this again?

Chris: The Space Quest fans came out of the woodwork and rose to the Kickstarter as expected. I have always believed that Sierra fans were unlike any fans you’ll ever meet. People that played those games have a connection to one another that most wouldn’t understand. I may not be right about everything, but I genuinely believe I’m right on that account. As far as the outcome goes, I do believe we could have cleared over a million dollars had we not had some sabotage going on. But we are not complaining in the least, we are happy and very proud of the funding we got and are well on the way to making the game so many have waited so long for. I am very proud that even with some of the tactics that were used against us in our Kickstarter, we took the high road throughout the entire thing. I genuinely believe that Kickstarter is a great platform for getting indie games developed, so I would definitely say I’d use them again for a project like this.

As a fan before you were a “guy,” what are your impressions of SpaceVenture? What do you think SQ fans will like about it?

Chris: As always with games made by The Two Guys From Andromeda, fans can expect an insane amount of humor. While sitting in on some of the game planning meetings with Scott and Mark, I found myself tearing up with laughter from the ideas they were throwing around. Now in seeing the game take shape and form, and to see those ideas become a reality has just proven even more that the chemistry is still there. Fans are going to love the graphics, gameplay, humor, and writing of this game. I truly believe SpaceVenture will stay true to classic adventure gaming fans while reaching out and making new ones.

What does the future hold for Guys from Andromeda LLC?

Chris: Ultimately Guys From Andromeda LLC is a gaming studio. Our goal is to complete SpaceVenture and hopefully make enough money from it to create the next game in the series. The business plan for our company is pretty simple: stay small, stay focused, and stay true to the Two Guys vision for adventure games.