After my not so great experience(s) adding lights to the Queen Anne Rowhouse, I swore I’d never electrify another dollhouse again. But since the Gull Bay is enclosed on all four sides, it would be impossible to see inside through the windows without lights. Luckily it’s a smaller house, and the way it’s constructed made this a much easier task than with the rowhouse.

I bought six fluorette sockets and frosted bulbs (for diffused light), planning to use three upstairs and three downstairs in strategic places where you couldn’t see them through the windows. (The kitchen, which is fully enclosed, needed a different solution since a fluorette on the kitchen wall would prevent the back half of the house from sliding in and out.) For the upstairs lights, I was debating whether to put them here (in the peak)… 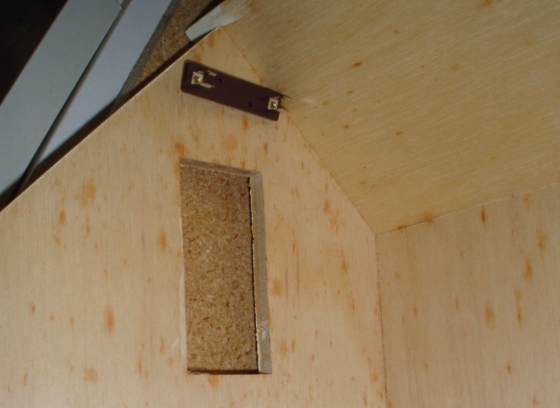 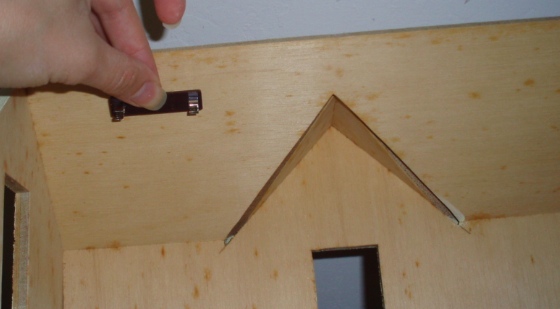 I decided on the peak and got this far before using up my tapewire. 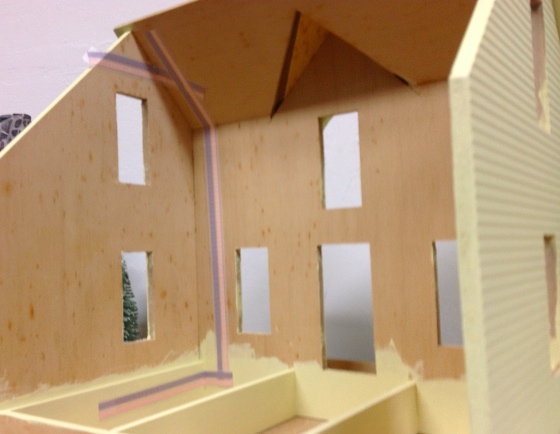 I attached the tape pieces with brads and added the junction splice at the bottom. Here’s the first fluorette. 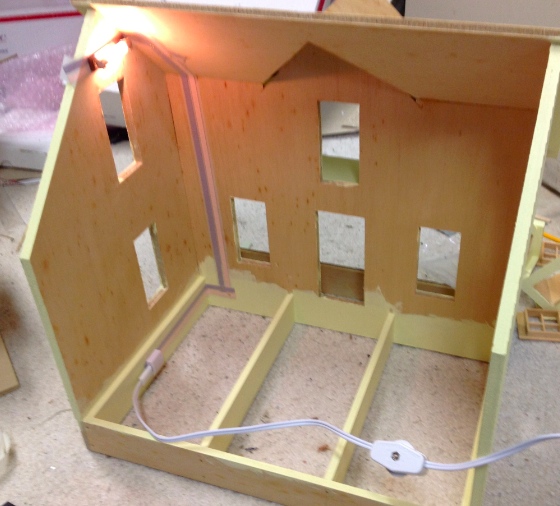 This casts a nice glow inside when the house is closed. 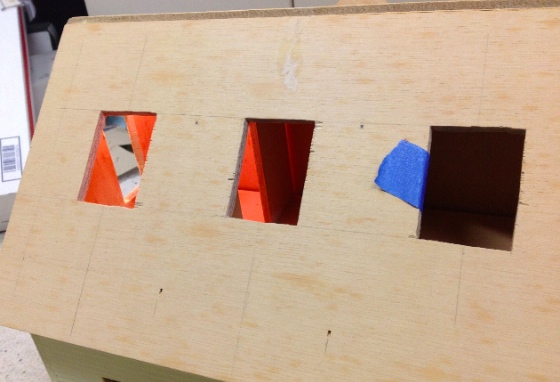 Today I got more tape wire and finished putting it in. (Ignore those wires at the bottom of the pic for the time being…) 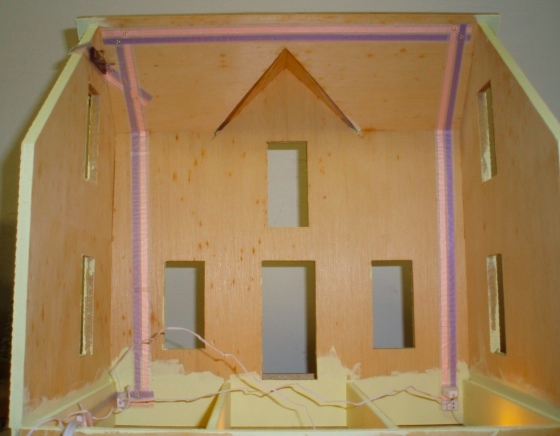 I decided I didn’t like the placement of the first fluorette socket, which was hard to see from the original windows but kind of easy to see through the dormer windows. Instead, I ran the three fluorettes along the top. When the house is closed, if you really crane your head you can spot them, but they’re pretty well hidden. 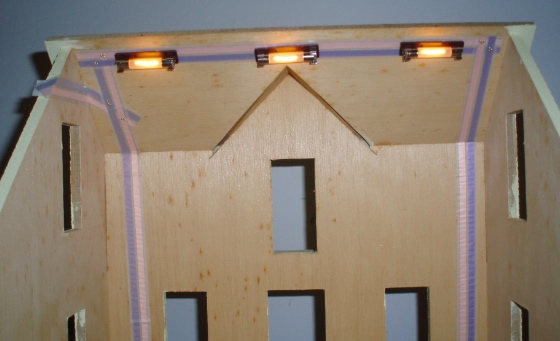 On to the first floor. When I was deciding where to position the fluorettes, I concluded that there was no good place to put them on the first floor — pretty much anywhere, you could see them through a window. So, those rooms will have plug-in lights instead. I originally came up with this solution for the kitchen since a fluorette wasn’t an option in there.

I’m planning to leave the plugs on and string the wires through “false ceilings” like I did in the rowhouse office. I’ll then run each wire down the wall (to be hidden by wallpaper) and through the floor. (I’ll have to drill a large enough hole for the plug to fit through, but will then patch it and cover it up with flooring so you won’t be able to tell.) The lights then plug into outlets positioned below the floor, and when the back part of the house slides into place it will cover them up.

I had a lot of trouble with half scale lights in the rowhouse — they’re very delicate and the bulbs don’t stay in too well — so for two out of three of these I’m using sturdier 1:12 lights. A little clunky but I think they’ll be okay in context. The 1:12 lights are Miniature House brand that I found at Dollhouses, Trains, and More: a “gold ceiling lamp” for the dining room, and a light similar to this, but clear instead of frosted, for the living room.

The sole half scale light will be a hanging lamp in the kitchen. (I’d already bought this, before I changed gears and decided to add plug-in lights to the rest of the downstairs. If I didn’t already have it on hand I probably would have looked for a 1:12 light for that room, too.) 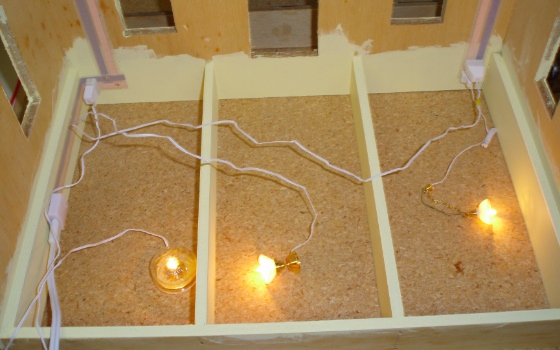 Word of warning: I made a point of buying 1:12 lights that said “replaceable bulb” on the packaging, but had to return the first two because the bulbs were permanently attached to the wires and plugs. The only way to replace them would be by pulling them out the back of the fixture — taking the wire and plug with it — which did not jive with my plan of permanently hiding the wire under the ceiling, wallpaper, and flooring.

I think they were old(ish) stock from before the screw bulbs became standard — I can’t even find them online to show what they looked like. Luckily the store gave me my money back even though the packages had been opened. The lights I swapped them for have screw-in bulbs.