Every year, a mother duck takes up residence in the ivy in our backyard, using the swimming pool as her own personal pond. (Dad pays the occasional visit… they may be monogamous, but sharing a nest is out.) Rosy goes nuts whenever she sees them, and after about six weeks a gaggle of ducklings hatch and end up in the pool, which they’re too small to get out of.

(Last year it actually happened twice. One unlucky mom hatched just one duckling in the middle of the night — took me more than an hour to get it out of the pool in the dark — and the next week a new mom showed up and eventually hatched 12 more. Crazy kids.)

We recently had our pool refinished, and were hoping that the pool being empty for part of February (when the duck couple usually shows up) would deter them. The new concrete deck was finished the last Friday in April, and the very next day the ducks showed up to claim their space.

Right on schedule, this morning the pool was full of ducklings. I happened to get a new camera this week so I took a few videos. They’re, well, not that good. But ducklings come but once a year (um, except for last year), so this is it for 2014.

After shooting this, I scooped the babies out with the pool net and deposited them next to the wire fence so they could jump through to the open space on the other side. In past years, this has been a complicated process involving ramps and hijinks as the baby ducks finally make it out, only to hop right back into the pool. Take, for example, the Great Duck Rescue of 2012: 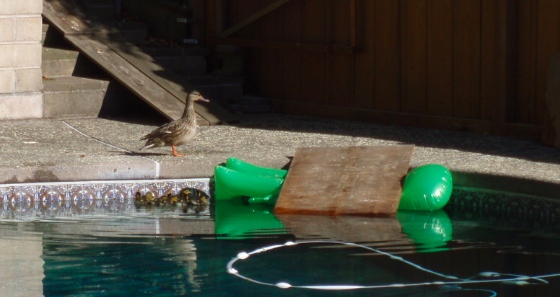 It seemed like a good idea at the time… 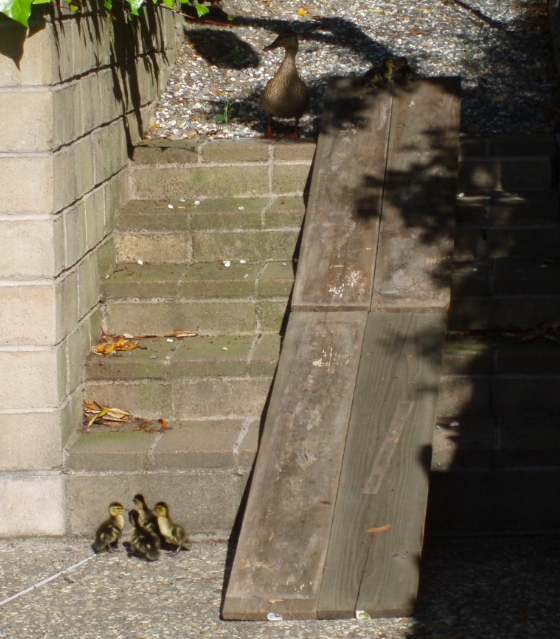 Okay, they’re less than 24 hours old, but they already know how to walk AND swim.
This shouldn’t be so hard.

But this year was the easiest duck rescue to date due to the fact that Geoff invested in a new pool net a few weeks ago. The one we tried using in the past is taut would act like a trampoline, with the ducklings bouncing right back into the water after we finally managed to scoop them up. But the new net is more like a fishing net, and I was able to scoop up all nine of them in one fell swoop.

Mama didn’t like it so much, but she followed me to the fence and flew over to reunite with her babies on the other side. 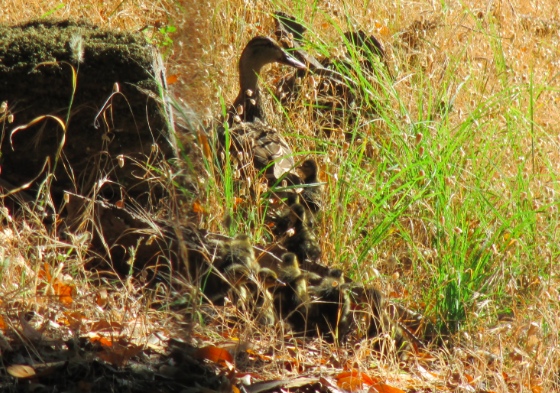 And with that, they waddled off into the great unknown.