With the Gull Bay’s chimneys in, I was able to finish shingling the front of the house. 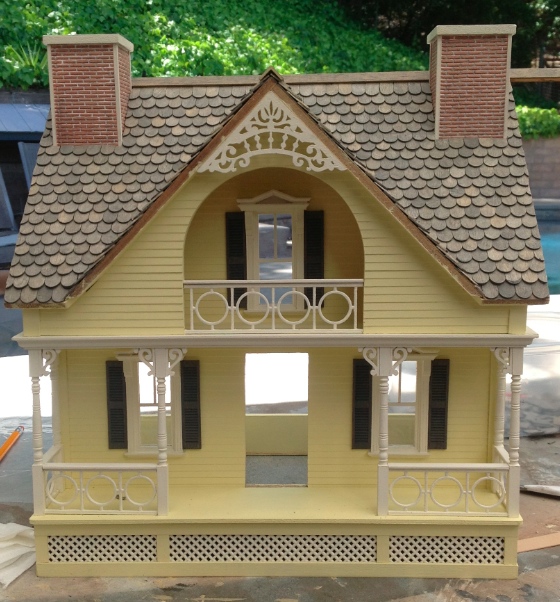 The seam where the shingles meet is, well, not perfect. Also the rows get kind of crookedy near the top. Eh, I did my best. (Or maybe not my best, but the best I felt like doing. Shingling is tedious and I was tired of it!) 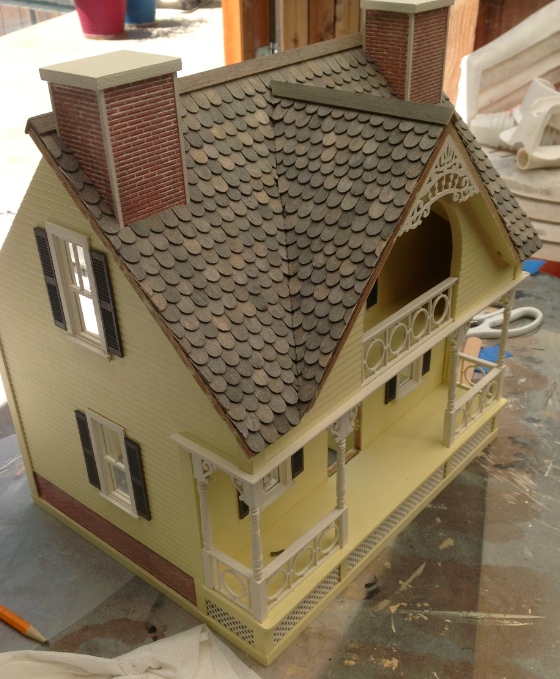 I considered adding one more row of shingles to the top (cut off so they would be spaced like the rest of the rows) but I was running dangerously low, and still had two dormers on the back to finish. I counted how many shingles it had taken to do the first dormer and frantically counted out what I had left. I was four shingles short. 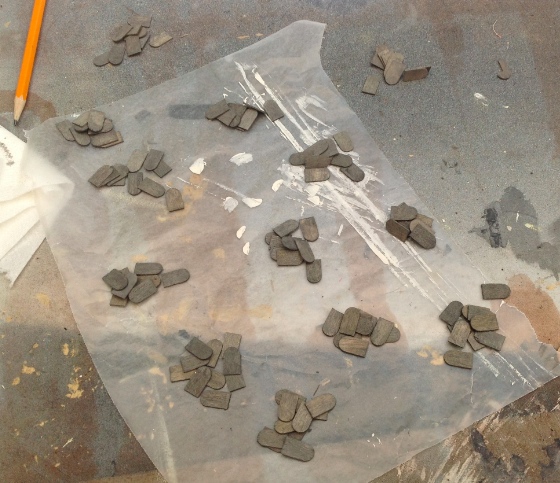 I could have bought another bag but it seemed like a waste of money when I was so close to not needing it, plus staining shingles is messy. I ran down to my workroom and scrounged around for some more shingles that had been discarded when I ripped out my initial attempt at shingling the front gable. I found several with glue on them and a few other clean ones that were just lying around. It pays not to clean up after yourself!

So, I decided to skip another row on the front and do the dormers very carefully. One reason I have trouble shingling angles is that the shingles split easily. I managed, with nine shingles to spare. Whew! 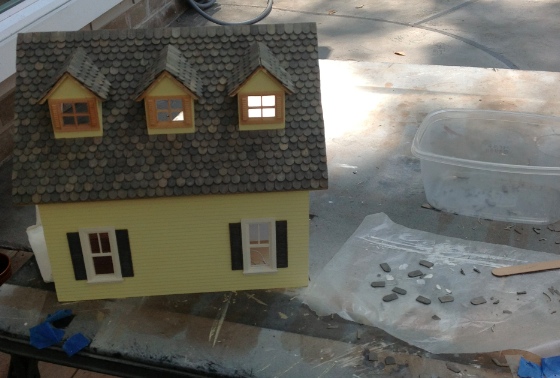 With shingles complete I moved on to roof trim. The house came with corner trim for the roofline and front gable that seemed kind of heavy to me, but I was going to use it in the interest of not spending any more money than I needed to. Then I realized that when I decided where to put the chimneys — so they’d butt right up against the roof trim — I neglected to take into account the extra space the row of shingles around the chimneys added underneath the trim. So the corner trim wouldn’t sit flush, but had a gap where the two slanted roof pieces should have met.

(This problem was compounded by the fact that the back was bumping into a piece of corner trim on the house and not sliding in all the way, but I didn’t realize that until later. I was able to fix it though. These are not problems you encounter with a regular, back-opening dollhouse!)

I considered adding strip wood to the inside of the corner trim to make up for it. This would have had the added benefit of reinforcing the corner trim, which was splitting. But once I got it glued in it just wouldn’t sit right and the whole thing looked kind of funky. Also I was concerned about the trim getting in the way of the two house pieces sliding together nicely. 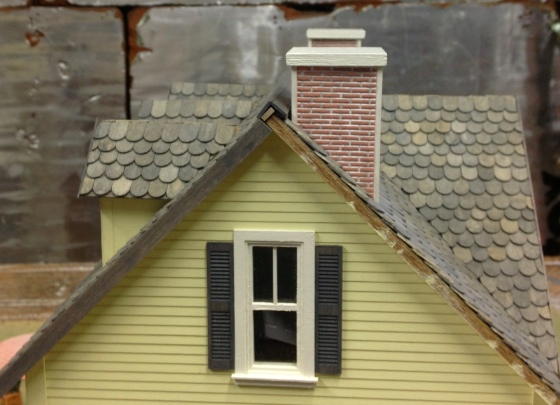 Instead I axed the corner trim and just added a piece of wood to the top of the front roof. I don’t think I took enough before and after pictures to really get across the issue, so take my word for it that this was the best solution, and it looks decent!

(The right roof trim in this pic is a scrap I taped on to test my theory about how the trim pieces would work together.) 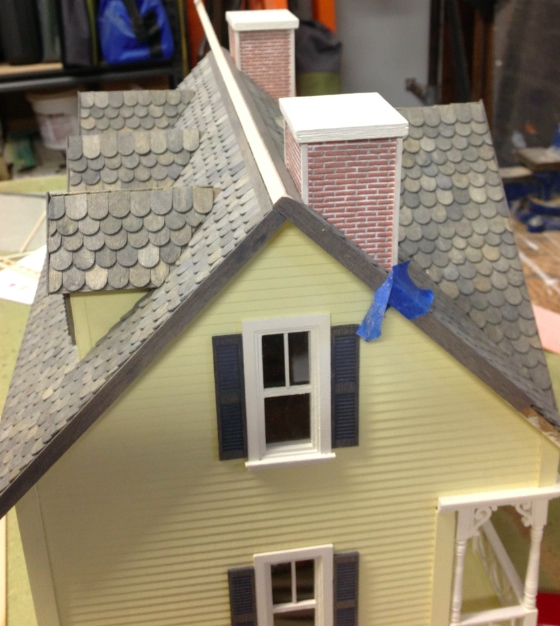 With my roof ridge trim figured out, I went around the house covering the rest of the exposed plywood edges of the roof with thin basswood. 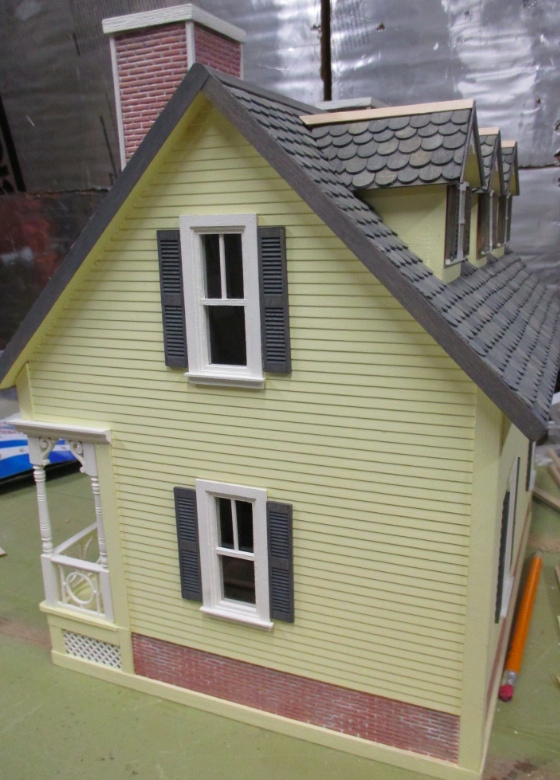 The apex trim I added to the dormers are Northeastern Scale Lumber BRE-1 brackets. 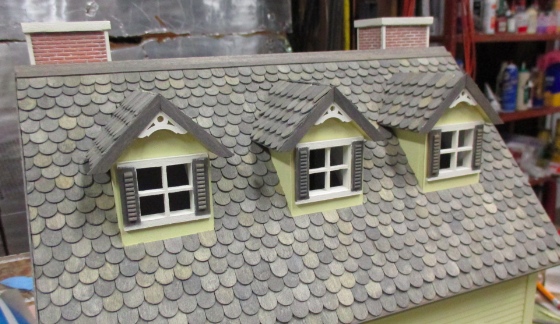 Here’s the front of the house with roof trim added. I was kind of bummed when I sat back and looked at it… it seems so dark and overwhelming where before the house was light and pretty. I started to second guess my choice to stain the roof trim, maybe it should have been white? 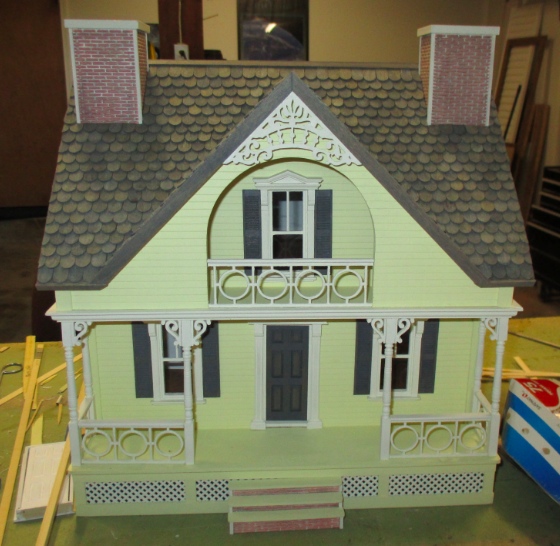 It was too late to turn back on the roof trim, so I pulled out some gingerbread I’d been holding on to for another project. This stuff is very thin. I glued a piece of strip wood to the back to provide more of a surface to glue to the house.

On each piece, I modified the last curve slightly, cutting out the interior part of the design, so it wouldn’t be visible from behind the holes in the apex trim. Then I painted them the off-white trim color.

Much better! The roof trim still kind of dominates your eye, but at least it’s less overwhelming now. 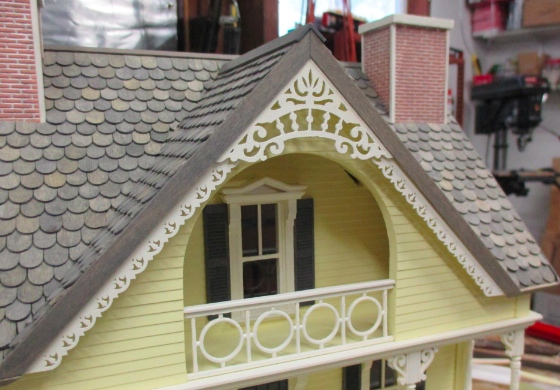 Returning to the back of the house, the shutters on the dormers were really bugging me. I tried to carefully stain the shutter part and paint the rest but it looked sloppy. 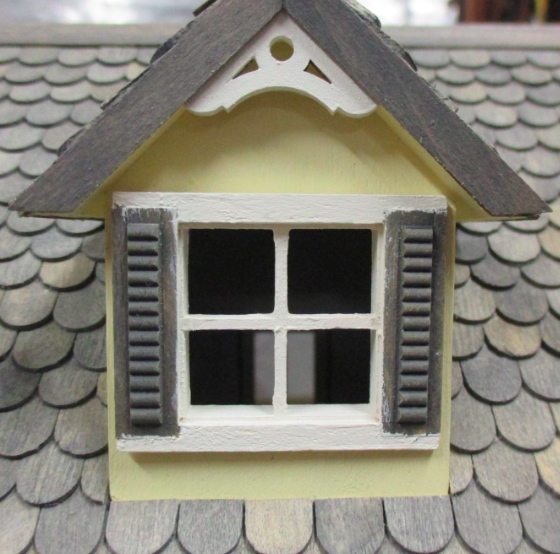 To deal with this, I stained some leftover mullions and used them to frame the shutters. Much cleaner, with the added benefit of giving the fake shutters some needed depth.

I also added stained mullions to the bottoms of the dormers to cover the tops of the shingles (there’s one on the left in the picture below, but not yet on the right). 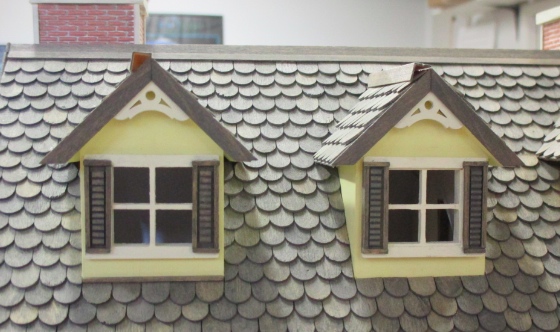 I added apex trim to the sides as well, to help distract from the dark roof trim and also because I had them lying around and don’t have any other potential use for them on the horizon. (These were originally for my Queen Anne Rowhouse but I ended up deciding I didn’t like them there.)

Since the house slides apart, I couldn’t glue these on both edges, so they’re only connected to the front part of the house. Hopefully they won’t get knocked off. 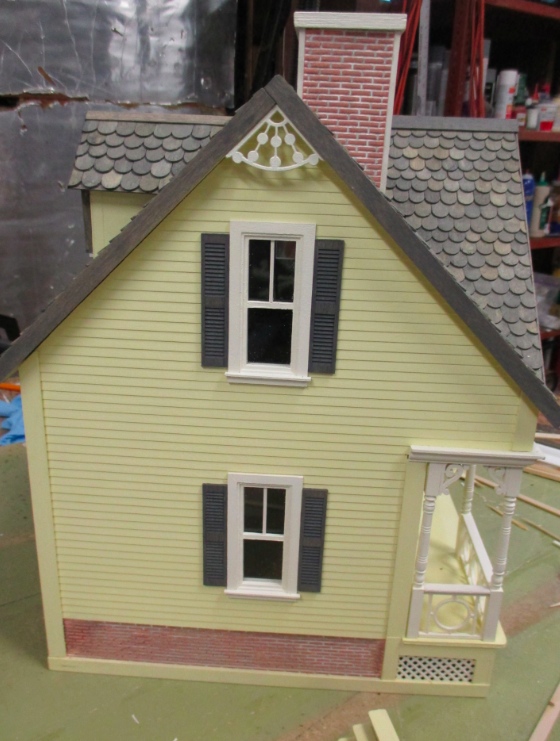 Finally, I replaced the thick corner trim on the front gable that came with the house (visible in all the earlier pictures) with something a bit slimmer that I had in my stash. The other piece was too clunky.

It’s impossible to see in this picture, but I added a very thin piece of basswood to the bottom of each chimney, to mask where the shingles butting up against it weren’t quite straight. If you compare this picture to the ones above and the bottoms of the chimneys look cleaner, then the trim is doing its job. If not… well, don’t tell me. 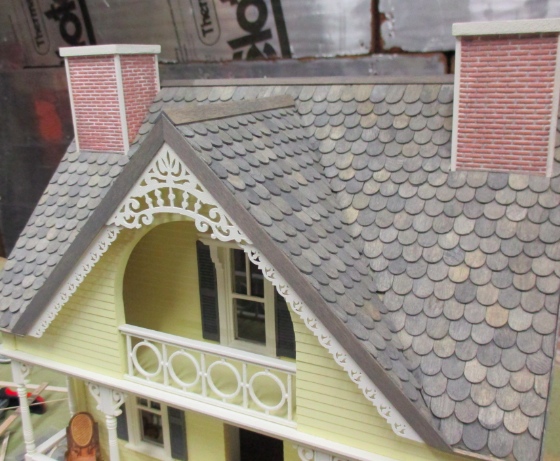 And that’s it for roof trim! Looking at the house here, you’d think there was nothing left to do on the outside. Well, yeah, until I got it in my head that I needed to completely change the front door… but that’s another story for another day. 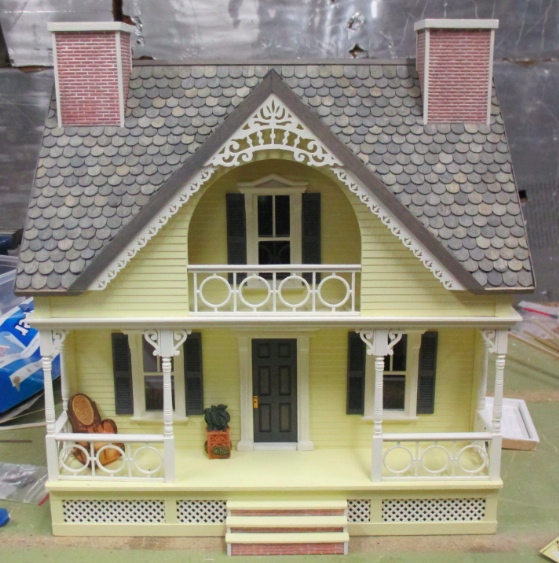 (ps – Stairs are not glued on, so it’s okay that they’re so off center!)