Continuing with the Victorianna bathroom: I made a false wall to enclose the tub, so it can be a tub/shower combo. I glued some basswood scraps together to make it the right width. 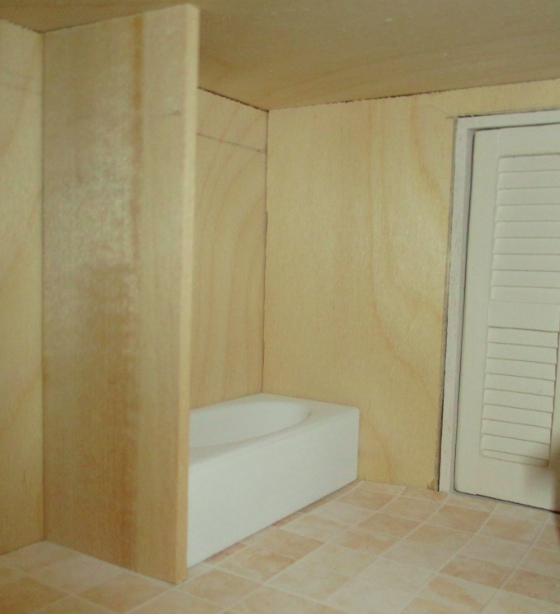 My initial thought had been to add a second layer of basswood with a recessed shelf for shampoo etc, but I realized the shelf would be 100% impossible to see, so I nixed that idea. Okay, then, how about a built-in linen closet?

Here are the pieces I used. 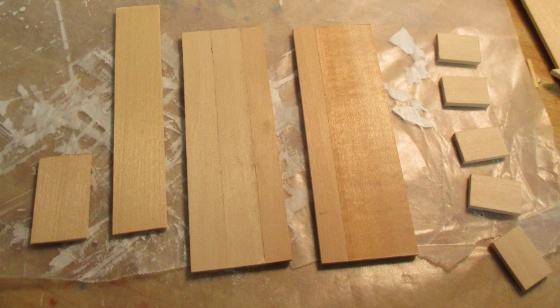 I started by gluing a top, bottom shelf, and bottom front piece to one of the sides.

I marked with a ruler so I’d know how to space out the shelves, and then glued those on. The assembly is lying on its front, to ensure that everything is flush at the front. 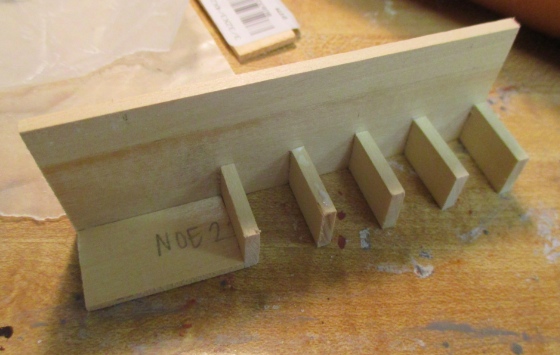 I then added the back piece and the other side, and clamped while the glue dried. 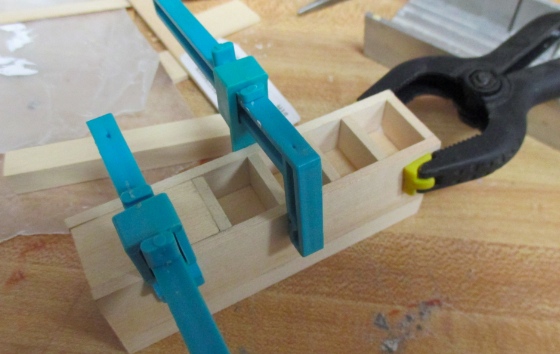 My side pieces, made from glued-together pieces of basswood, were sagging a bit so I added a few spacers to the open back to keep the assembly square.

I then painted it and added cut-down pins as drawer pulls. I’ll wait to glue this in until the wallpaper, trim, etc. is finished so it’s easier to get my hands into the room. (The visible side will be covered with wallpaper, hence the lack of paint!) 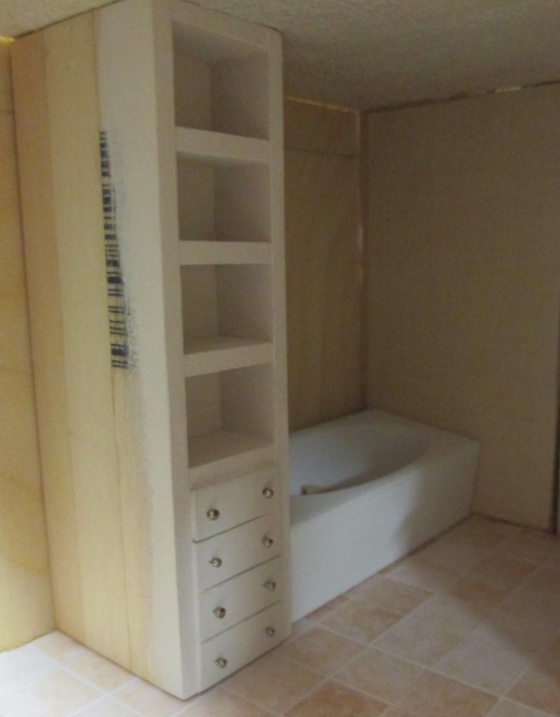 In other bathroom news, I raided Michaels’ jewelry department for items that could work as bathroom fixtures, like these brads. 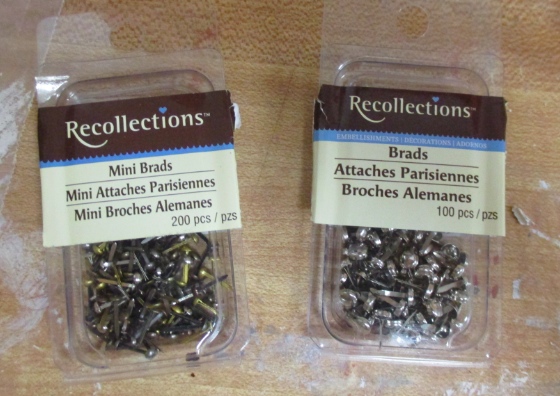 These toilets (which I have several of) don’t have handles and I got the idea to add brads to the top as push buttons. I cut the legs off the brads with wire cutters. I wasn’t sure which size would be better, but after seeing them I decided the mini brad looks more to scale. 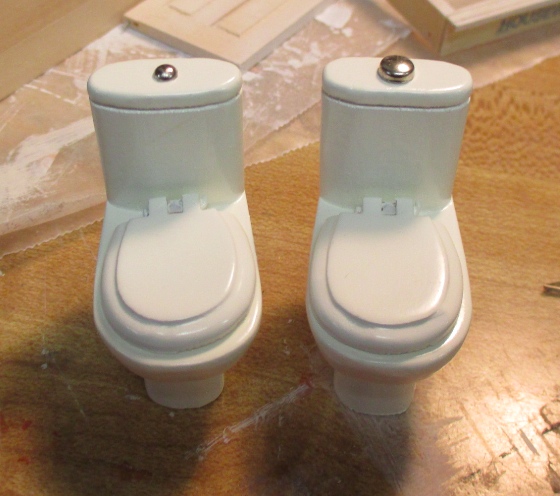 I also used a mini brad for the sink drain. I was going to use a jump ring like I did in the Rosedale, but newer sinks usually have a built-in stopper. 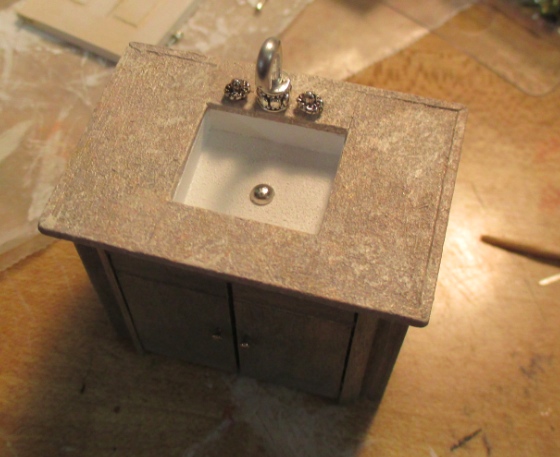 I redid the faucet and taps on the vanity (which originally looked like this) with 12 gauge aluminum wire and decorative headpins. 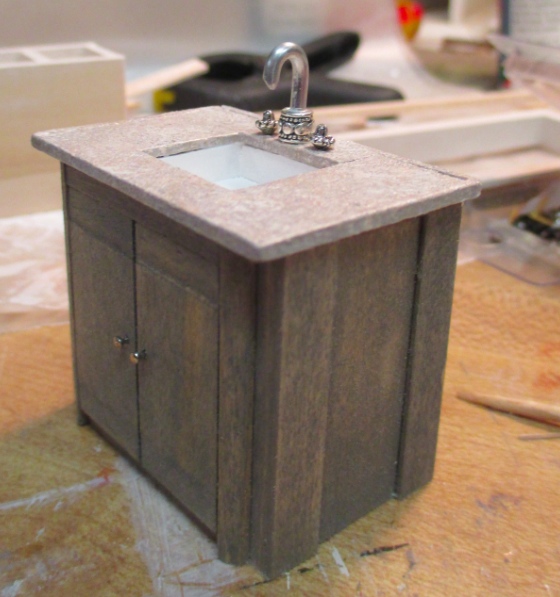 Close-up of the decorative headpins. These could also be used as drawer pulls. 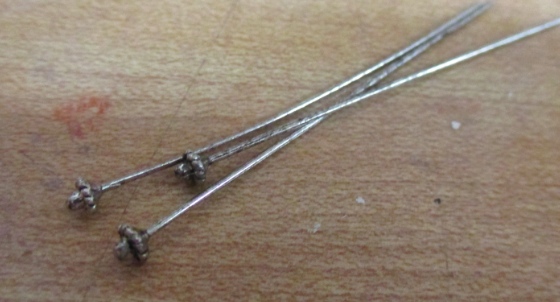 I bought a pack of toggle clasps, similar to these. The round part can be used for a circular towel holder, and the straight part for a towel bar.

I cut the loop off the bar and added eye pins to the ends. 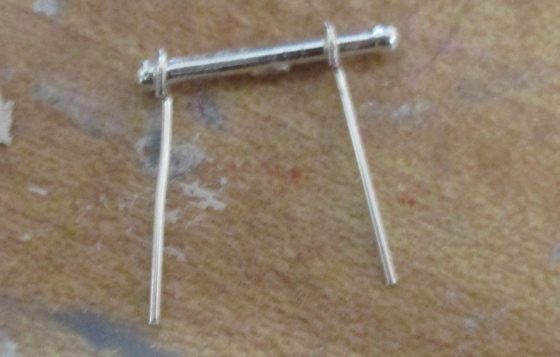 I then poked the eye pins through the wall of the vanity. Since the vanity is hollow inside and the doors don’t open, I didn’t bother cutting the pins down. 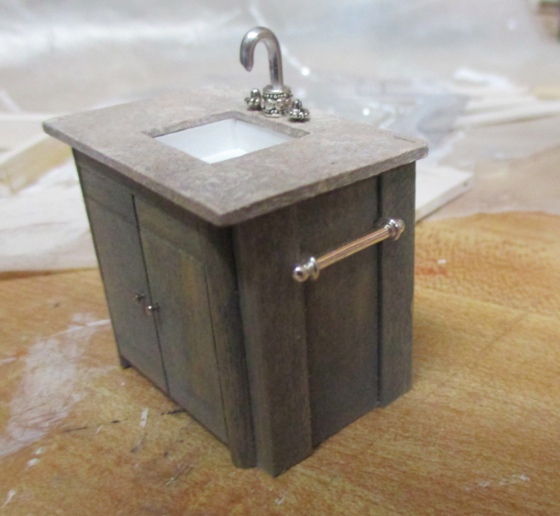 I need to come up with a better towel-like material, but for now, here’s how it looks with a scrap of cross stitch fabric. 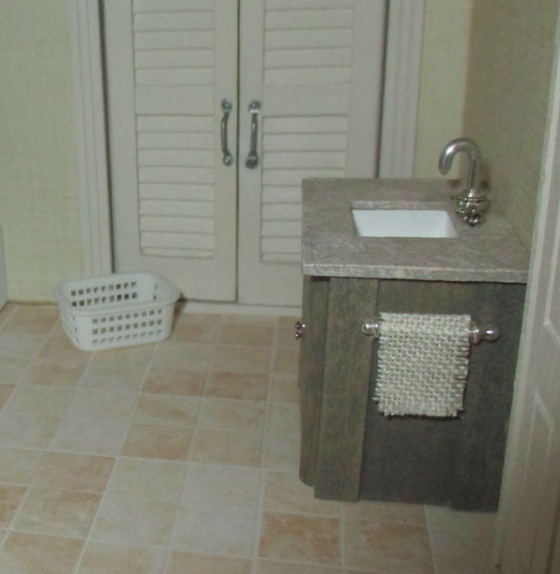 To make these, I stuck the headpin all the way through the earring back so it came out the other side, and then cut off the excess at the base. The earring back grips the pin to keep it from falling out and I added a dab of glue to the hole in the base for security. But those bases aren’t exactly flat and a tiny nub of wire sticks through, so I’m not sure how well these will attach to the wall.

Finally, I used one of the bigger brads as a tub drain. 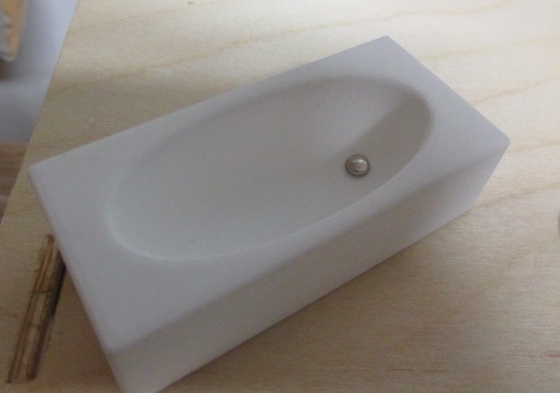 Scratch-built bathroom vanity in half scale