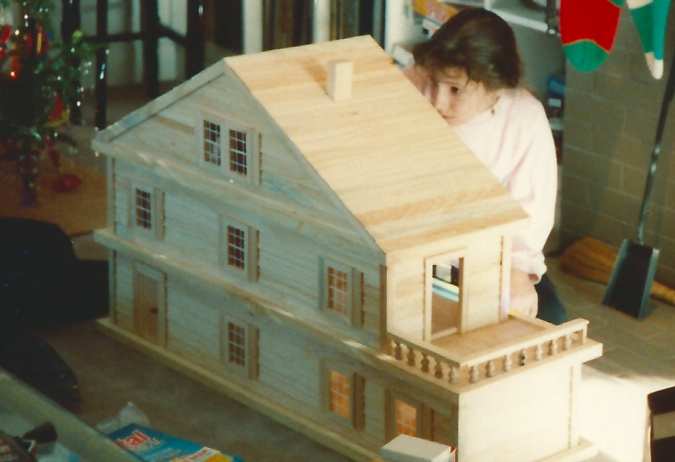 This is actually not my very first dollhouse, but it’s the first one I took seriously. My parents bought it for me for Christmas around 1990, from a local toystore. It’s not quite to scale and was apparently meant to be more sturdy than pretty. This made it a great house to mess around with when I first started looking at miniatures as a hobby, rather than as toys. After I graduated from college I moved it from Boston to California with me… the movers had to build a special box for it!

The house has six rooms (seven if you count the kitchen and dining room separately) plus a deck. The floors are very long and the ceilings low, which made it hard to take pictures of some spots. 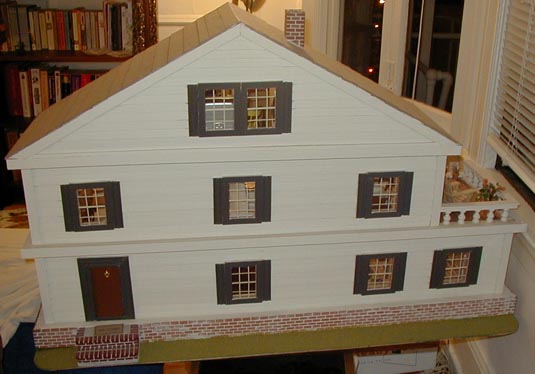 There’s no real unity in the decor here. I used what I had, and what I could afford to buy. There’s a lot of X-Acto / House of Miniatures furniture (I was first exposed to these kits when my mom found three for a dollar at a thrift store!) A lot of the other things in the house I acquired growing up, which may or may not have been originally intended for a dollhouse. 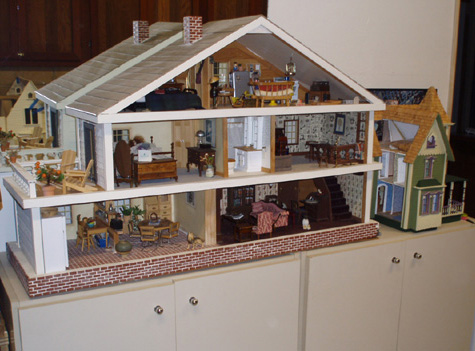 I used to have pieces from a Tomy living room in here, but I recently took them out… I’m thinking of making a roombox for them. [Note from the future: Those pieces have been relocated to the Tomy Smaller Homes dollhouse.] There are also Nutshell News / Dollhouse Miniatures projects scattered throughout… I cut all the pictures on the walls out of magazines, after Nutshell News gave me the idea. 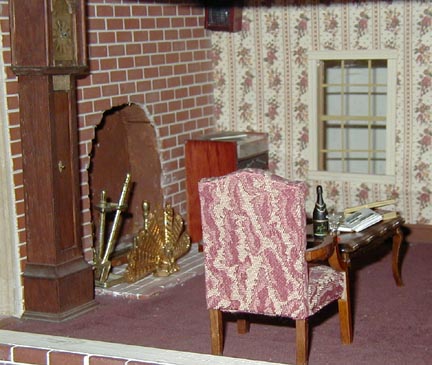 My father helped a lot with this dollhouse, especially with the kits. When I was in college he finished the clock for me… it had been sitting around partially assembled for five years! He set the hands to 3:00 — the time that General Hospital, my favorite soap opera, came on.

I bought this wallpaper at the first miniatures show I ever went to. I ran out before I could do that corner under the stairs, and didn’t know where to buy more. I recently happened upon some at a show, which was a stroke of good luck because it’s discontinued… 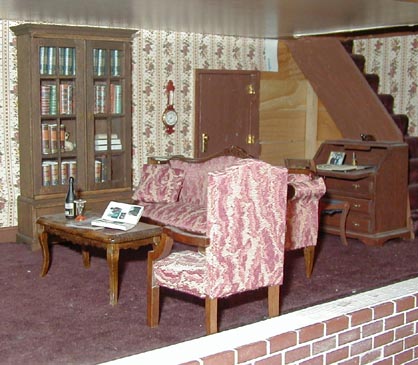 My dad also put together the kitchen cabinets and appliances, which were kitbashed from a Realife kitchen kit. 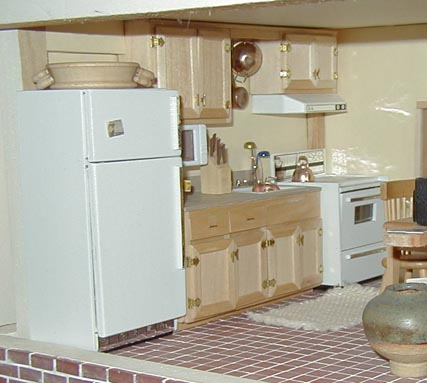 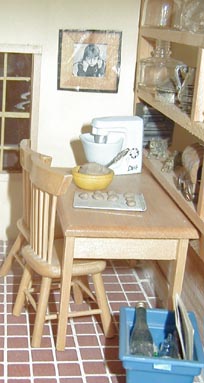 I love these shelves separating the kitchen from the dining room. Many of the items on the shelves belonged to my grandmother, who died in 1995. 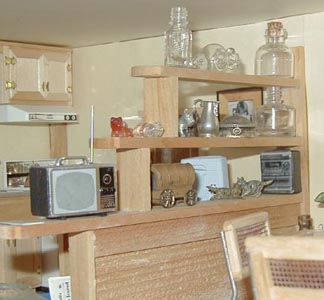 These table and chairs came from a great store in Cambridge called The Enchanted Cottage. A friend and I used to go down there on the T in high school. I don’t know if they’re still around. [Note from the future: Sadly, they’re not.] Most of the plants were given to me by my mother, who picks them up at flower shows. 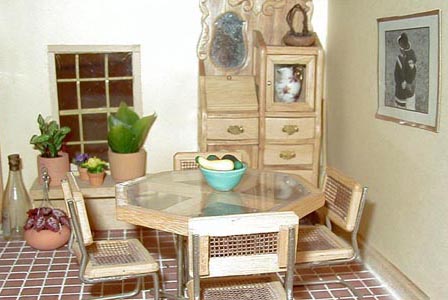 The house is inhabited by two women: a freelance writer, and a college student who rents the apartment upstairs. Occasionally the writer has her boyfriend over… he tends to leave his shoes lying around! 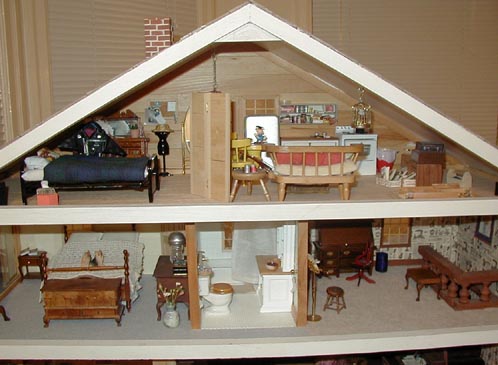 The writer’s office. I made her a computer in high school (another Nutshell News project) but I recently removed it because it was obsolete! I have had my eye on a very nice desk for awhile, but haven’t decided if I want to spend $50 on it. 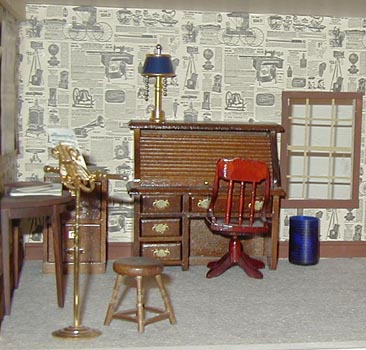 When she’s not working, she apparently plays the flute. The folding stairs lead up to the college student’s apartment. 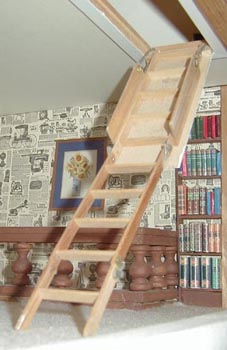 The bathroom. I made the shower curtain with fabric and jump rings. That bowl thing near the sink resulted from a recent attempt at making actual mini candles (that’s about as far as I got!) 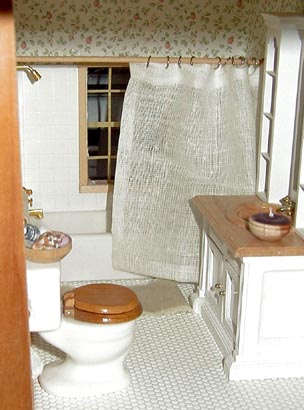 The master bedroom. The closet is made from a Houseworks door. The lamp is a little glass bottle topped with half of (I think?) a tea infuser, both of which used to belong to my grandmother. 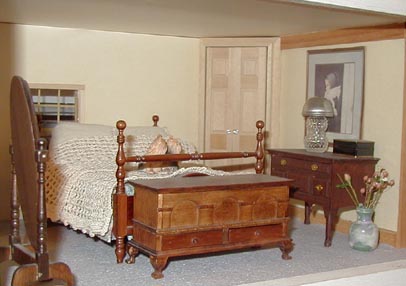 From this angle you can see the door leading onto the deck. 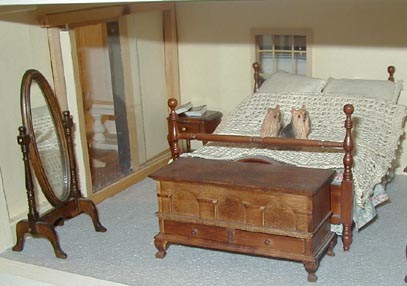 I made these chairs from kits. The orange tree used to be my grandmother’s. The other plant was actually alive at one point… my old apartment was so damp I never needed to water it. Then I moved into a place that wasn’t so damp. Oops. 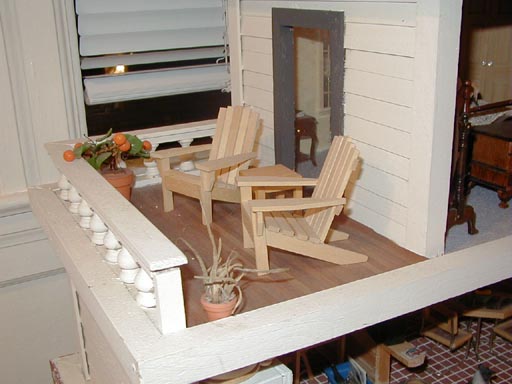 The attic apartment is my favorite room in this house. I had the idea for it long before I lived in a studio apartment myself (it seemed more exotic at the time!) There used to be all sorts of things hanging on the walls — little “posters” I cut from magazines, weird findings that looked like things a college student would have. After I graduated from college, I took all that stuff down. I think she’s a grad student now. 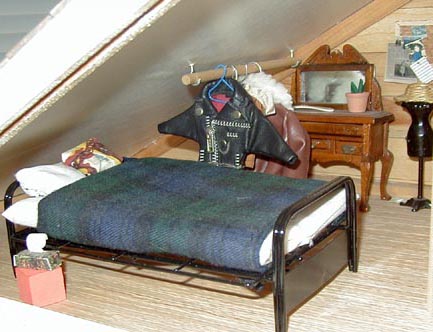 I liked putting all different types of furniture up here… as if the occupant shopped at yard sales and Goodwill. The futon is a relatively new purchase from HBS… guess she got tired of sleeping on a mattress on the floor!

In the photo below, to the left you can see part of a screen my dad made from Houseworks shutters. It separates the “bedroom” from the rest of the apartment. The sink and yellow table and chairs were from my first (toy) dollhouse, which had belonged to my sister before me. The three-legged table in the foreground is a souvenir from Plymouth Plantation. 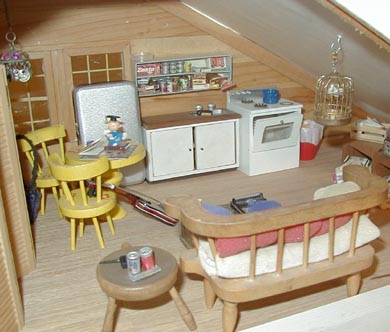 The record player isn’t Tomy, but it was given to me by my grandmother at the same time as the Tomy living room. I made all the items in the crates (album covers, magazines, books) from magazine clippings. Behind the tables is a toolbox filled with individual tools. It was given to me by a good friend soon after I graduated from college… an essential gift for a girl who’s just moved out on her own! 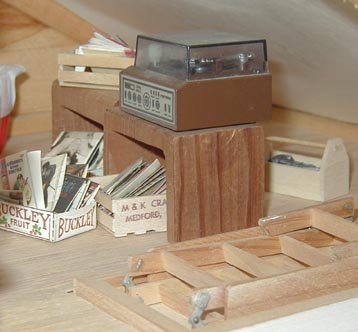