Geoff was over with his digital camera so I had him take a few pictures of the conservatory. The cabinets and appliances are mostly assembled. 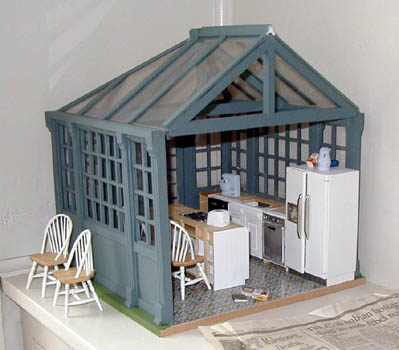 An eating surface will be built into the island, where the chairs are. 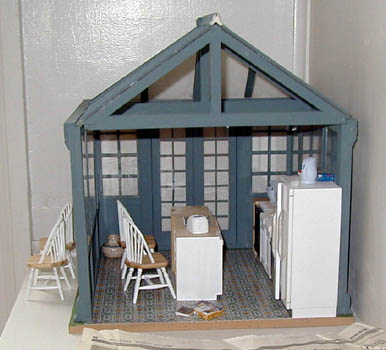 Update, August 25: Finally, the dormer has been attached! With a ton of glue and a bit of luck, it’ll stay put. I turned the house on its side and applied pressure to get the dormer to glue in as well as possible. There are major cracks and glue glops, but I’ll be covering them up with trim. 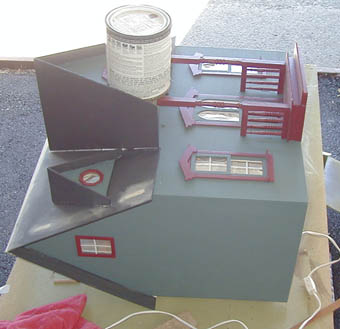 Now that the wiring in the bedroom is done, I laid the hardwood flooring. (Haven’t done the floor in the bathroom yet because I might add a light in there.) Now, finally, it’s time to cover up those ugly brackets.

I made the bedframe with basswood. I wanted to build drawers into the bed but decided to keep it simple. 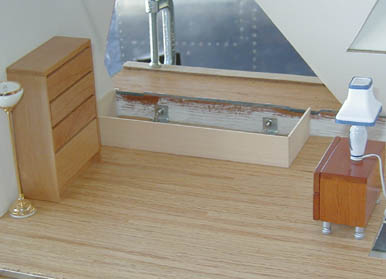 Painted the basswood white and added some to butt up against the sloping ceiling. I think it looks pretty good! 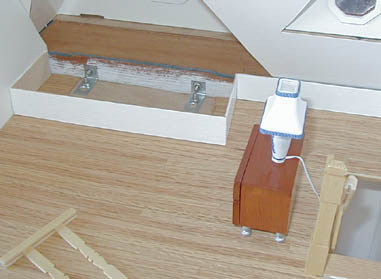 Yesterday I spent some time working on the bed, but I don’t have any more pictures. I’ve cut pieces of wood to lie on top of the frame and in the “nook.” The mattress will go on top of these.

I’ve also glued in the stairs and railing, and started painting the roof with another coat to cover the wood filler. (Note to self: next time, don’t paint the roof until the very end!) I want to finish up the bed and roof before I bring the house home. It won’t be quite done, but I’m going to move it out of the hangar soon. (Woo hoo!) 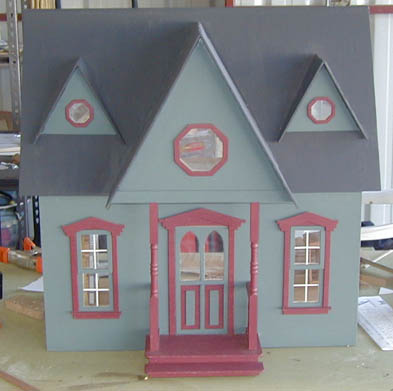 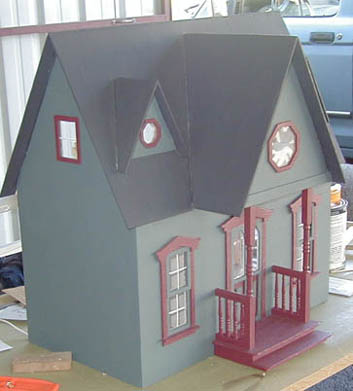 One of the last things I did at the hangar was paint and assemble the bed. It’s a very simple bed I made from my own design . I painted two pieces of wood and lay one over the bottom of the “nook” area, and the other on the bedframe I’d constructed. They’re not glued down… I may eventually hinge the outer piece so the dollhouse resident can use it for storage (assuming she has a big strong boyfriend to move the mattress for her!) I also made a headboard tall enough to hide the little space where the nook extends farther back than the wall. The dollhouse store didn’t have the right size balsa so I glued two pieces together.

With the wood in place. At the bottom of the picture, you can see the basswood I used for the headboard. 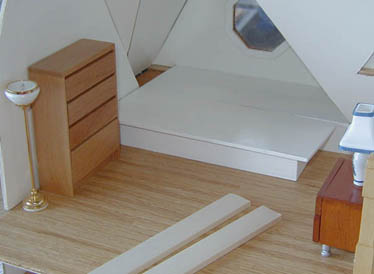 With the headboard in place. This, too, has not been glued down (and probably won’t be). 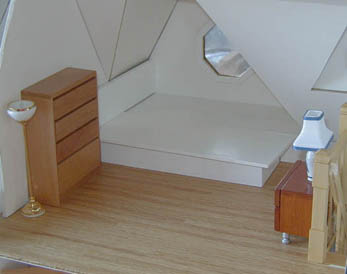 I also finished the railing around the stair hole. As you can see in this picture, one edge of the bed extends a little farther than the other. Once it’s made up you won’t be able to tell. 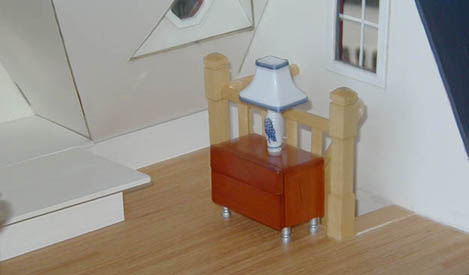 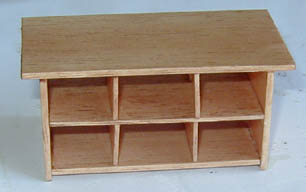 And, I stained a little table I put together a few weeks ago. It’s made of balsa and based on one I saw in the IKEA catalog. This will go in the living room instead of an entertainment center. The TV will sit on top of it, and I’ll put games and books on the shelves.

The house survived the drive home and is now sitting in my kitchen, next to the conservatory. Coming in September… interior decorating!