My parents came to visit last weekend, and gingerbread houses were on the agenda! Here’s what we started with (read the earlier posts here and here to see how I got the houses to this point). I already built a puzzle house like the one on the left, so my mom decorated that one and I decorated the three story Victorian. 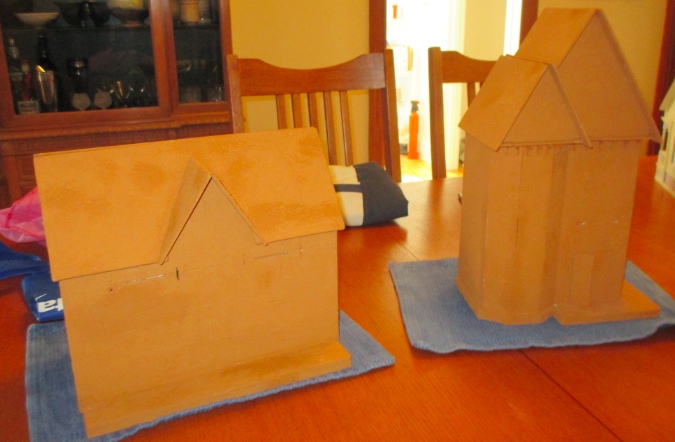 I don’t plan to decorate the inside of mine, but I finished them so they wouldn’t look bad from the back. The Spiced Gingerbread paint sample was just enough paint to do these two houses. 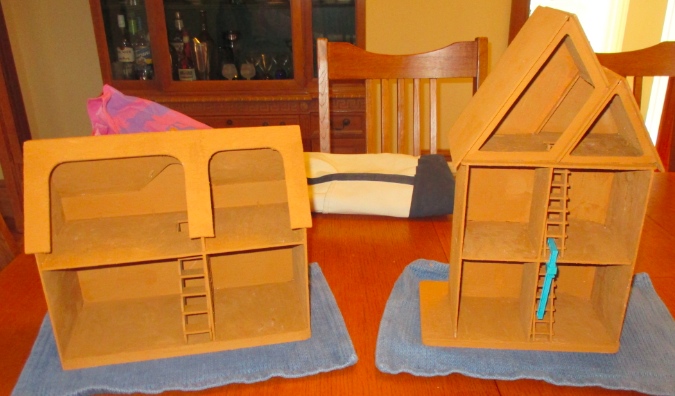 If you’re wondering, these puzzle houses are roughly half scale, but they aren’t the same scale as each other. Here are the staircases next to each other — you can see that the three story Victorian is a bit smaller in scale than the other house. 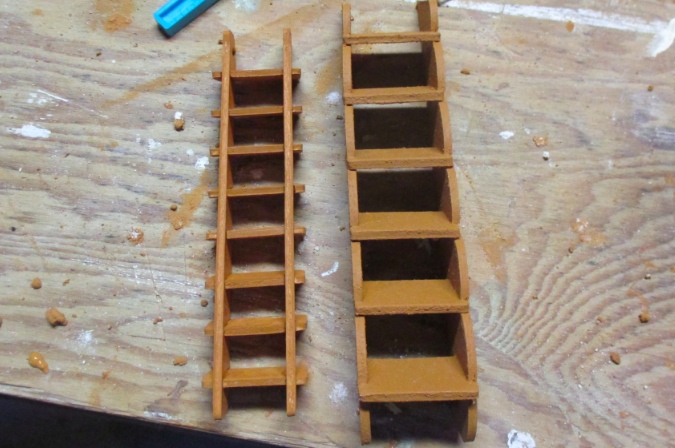 Here’s a real gingerbread cookie in front of one of the houses. The paint color is pretty close! 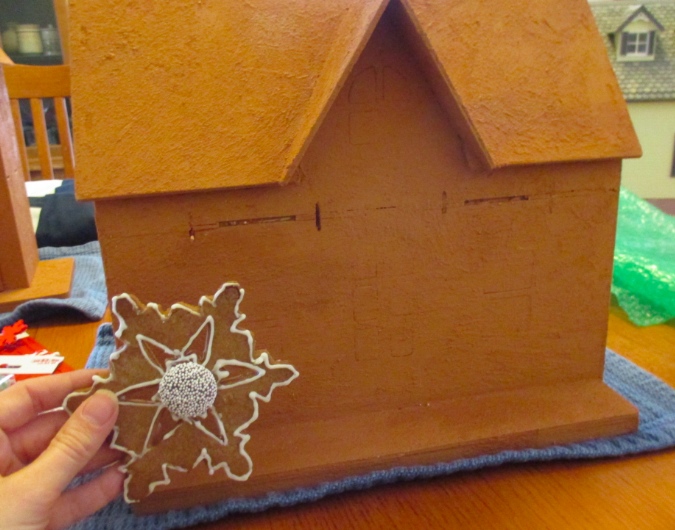 We started by organizing all the fake candy in a muffin tin. I bought this candy at Michaels the Friday before Thanksgiving, at which time the store was well stocked. We went back this past Monday (December 14) and they were completely out of this stuff. If you’re thinking of doing a project like this, buy your candy early! 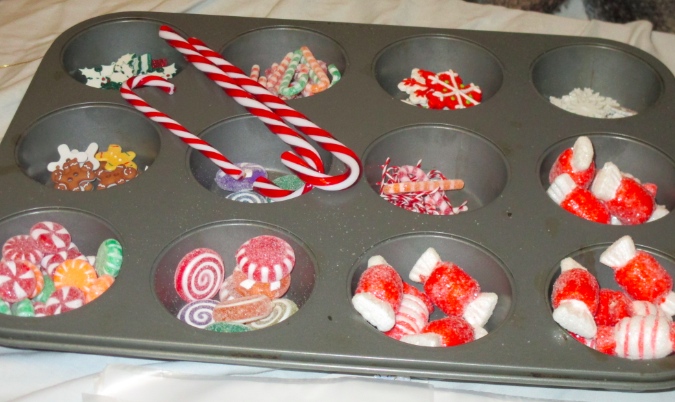 Before we could go nuts with the candy, we had to figure out the frosting. Cinderella Moments suggested using Dap Fast N Final lightweight spackle but Home Depot didn’t have it. Instead we got Dap Paint N Patch lightweight spackle, which can’t be all that different. The consistency is like whipped cream cheese. 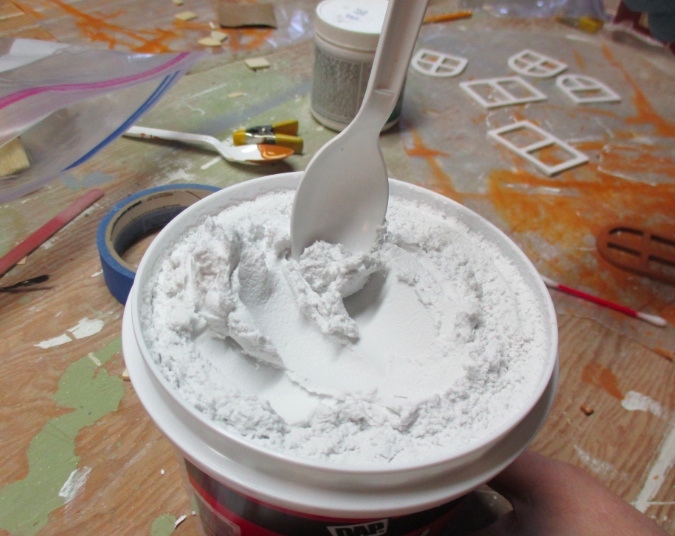 My mom brought a package of disposable decorating bags that came with 20 bags and three plastic tips. We used the plain tip for the windows, piping the frosting on top of the window trim that came with the kits. (We’d painted the trim white first.) Wetting the surface with a paintbrush before applying the spackle seemed to help it stick to the wood. 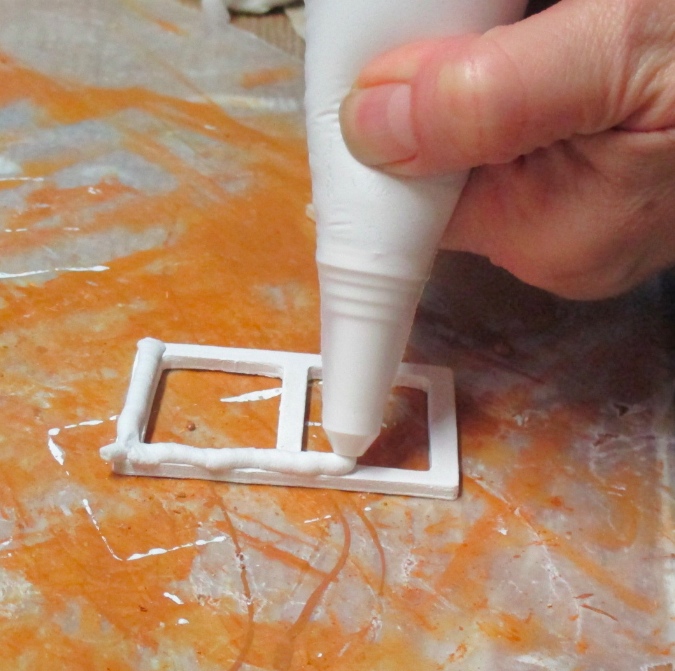 After piping the frosting on, we wet it with the paint brush and squished it to spread it out on the wood and give it a flatter, more frosting-like look. 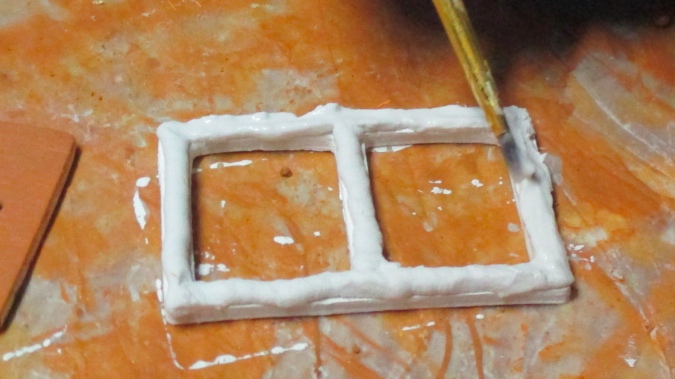 Here they are drying. Good enough to eat? 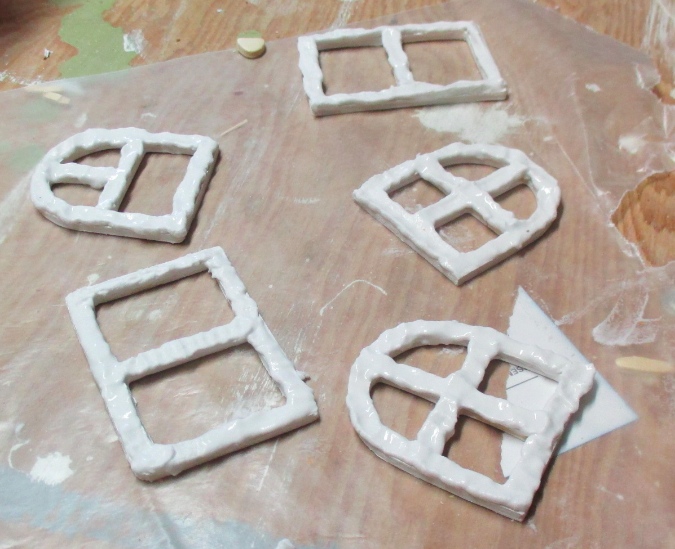 My mom also piped frosting onto her door. I painted this with the very last dregs of the gingerbread paint so it’s a good thing it’s mostly covered! 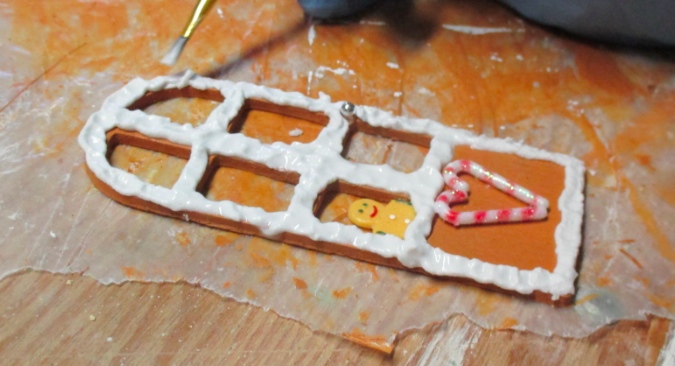 There were gaps where the roof pieces meet (meant to hold trim I omitted when I built the houses), so she did a squiggly line here to keep the frosting from caving in. The candy canes were placed right into the spackle and left there to dry, no glue. It holds well as long as you don’t fiddle with it while it’s drying. (Ask me how I know this…) 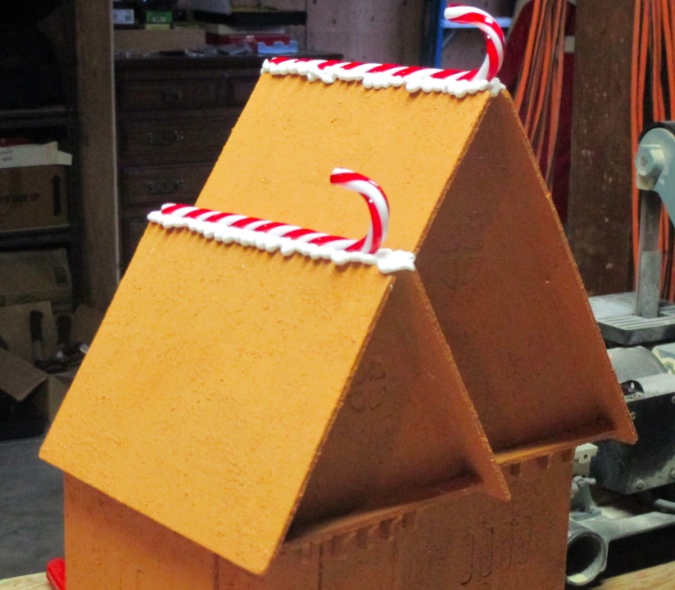 At this point we left the houses to dry overnight. By morning the spackle was rock hard and we could continue. 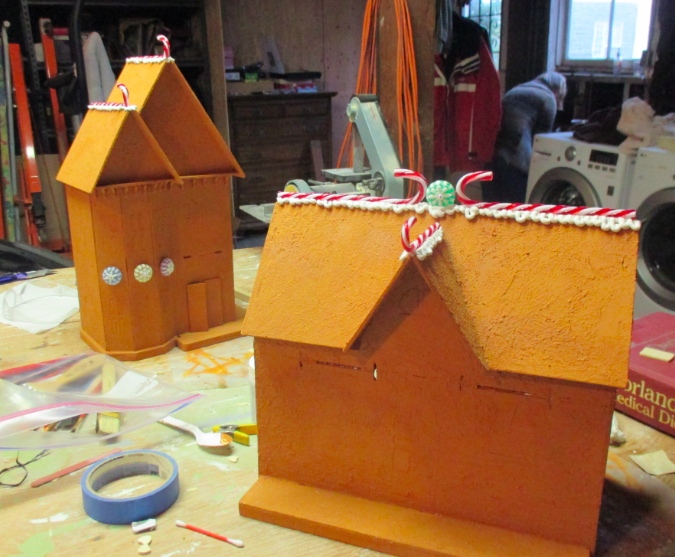 I started on my house by gluing candy canes under the eaves and candies around the base. 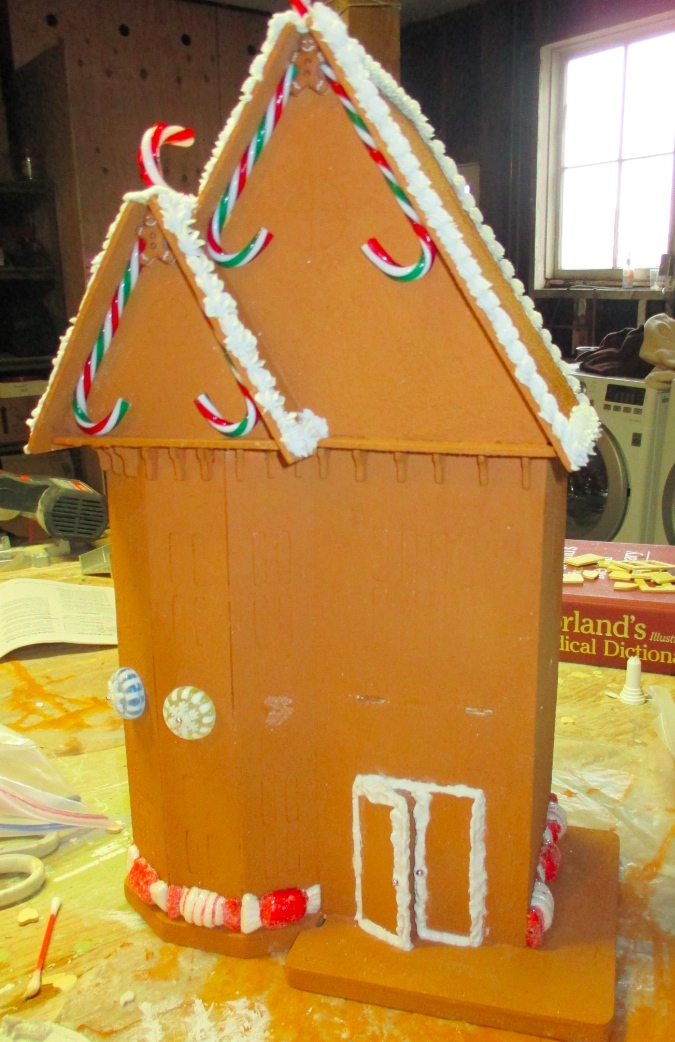 Those red and white candies around the bottom are styrofoam. We cut them in half with a serrated bread knife so they’d sit flush against the house. 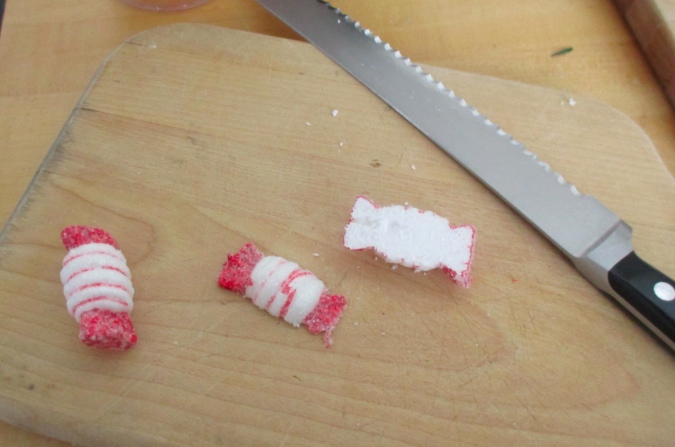 Convinced that the spackle frosting was going to work out, we switched to a fancier tip. 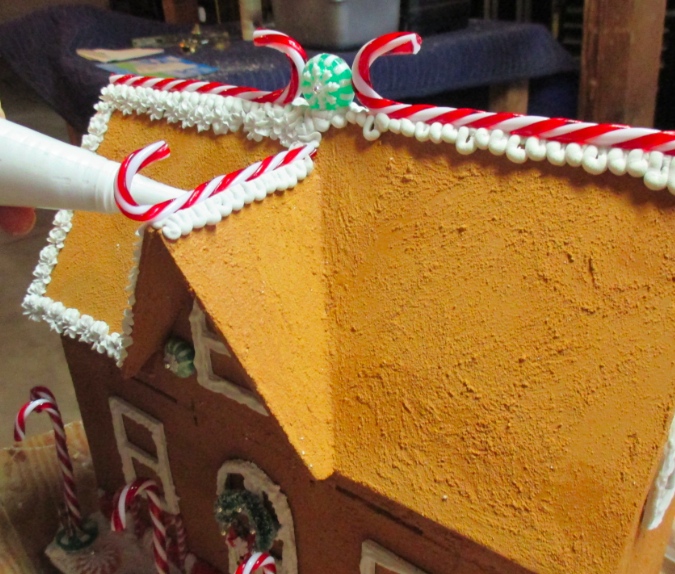 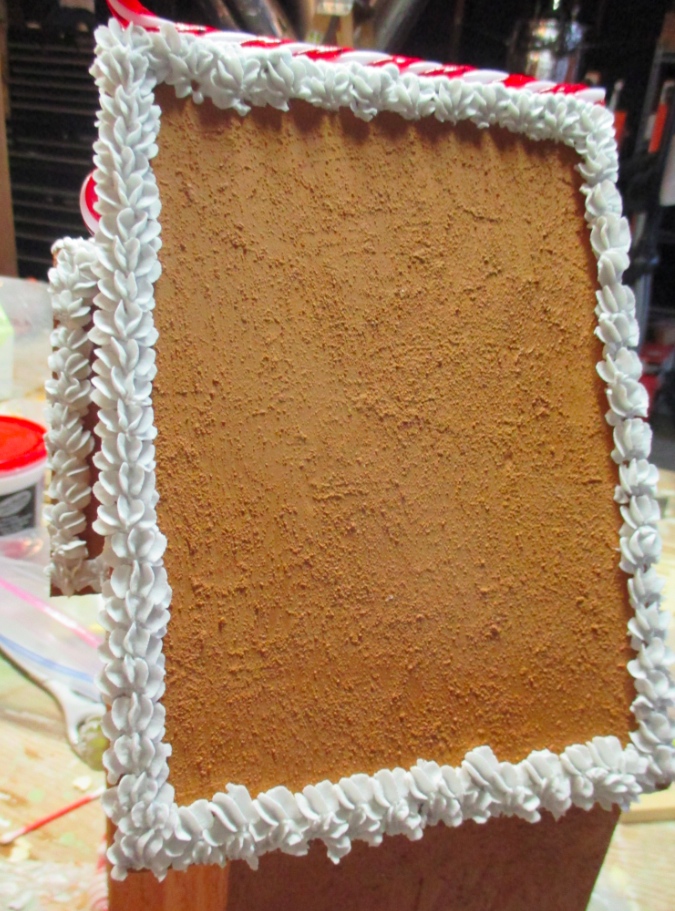 My mom decorated the bottom part of her house before adding the porch roof. The “snow” on the porch is a product called Snow-Tex that I got at Michaels. It’s similar to the spackle but with a grittier texture. 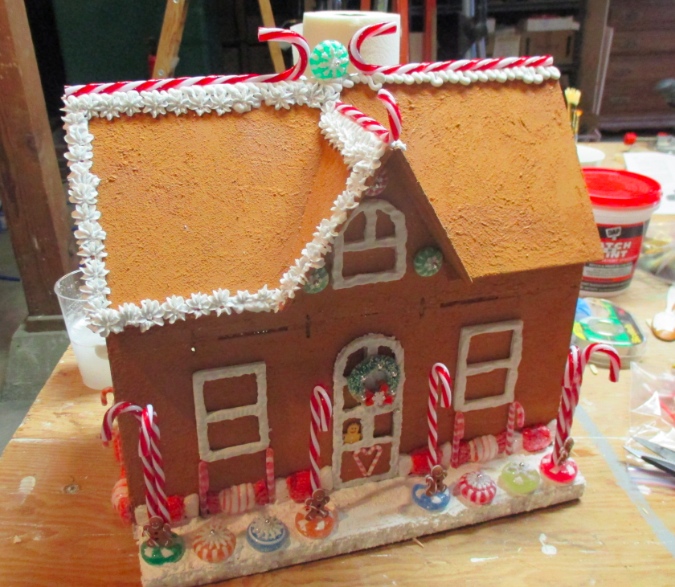 After a few failed attempts at gluing in the porch roof, we added angled blocks to the underside to attach to the house. (I painted them with the very last remnants of gingerbread paint first!)

Here’s how my mom’s house looked when she took it home with her. We were able to carefully pack it into a box that she took as a carry-on on the plane. 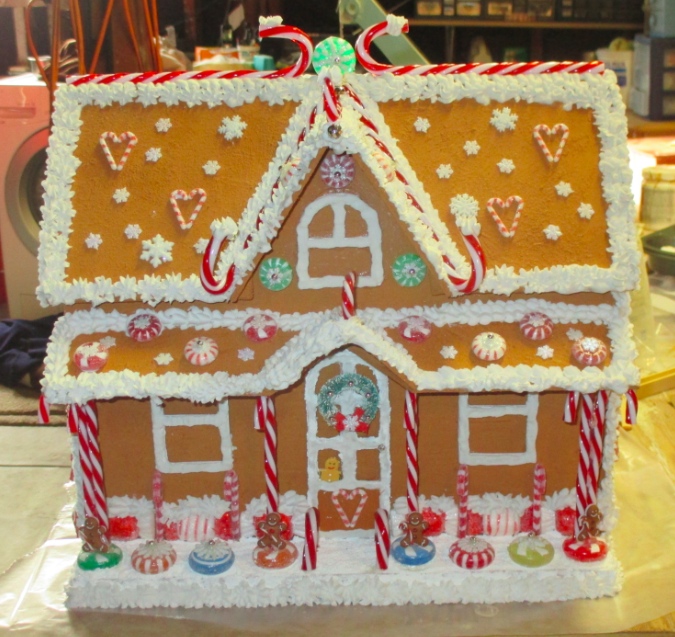 She went a little nuts with the frosting, in a good way! It looks so tasty… 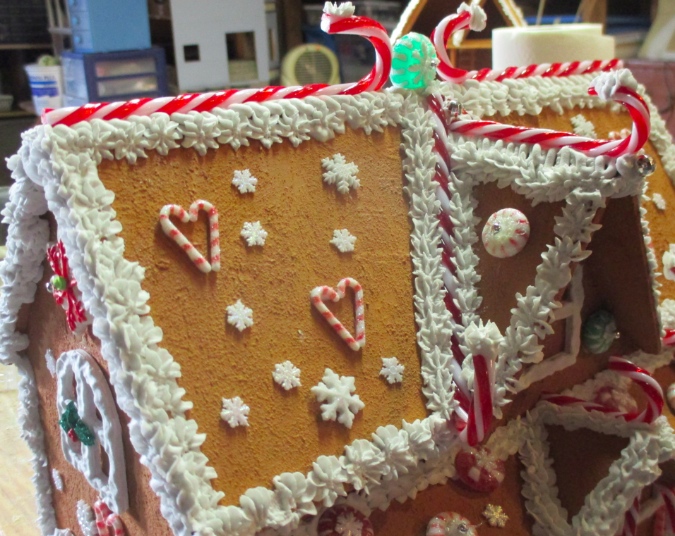 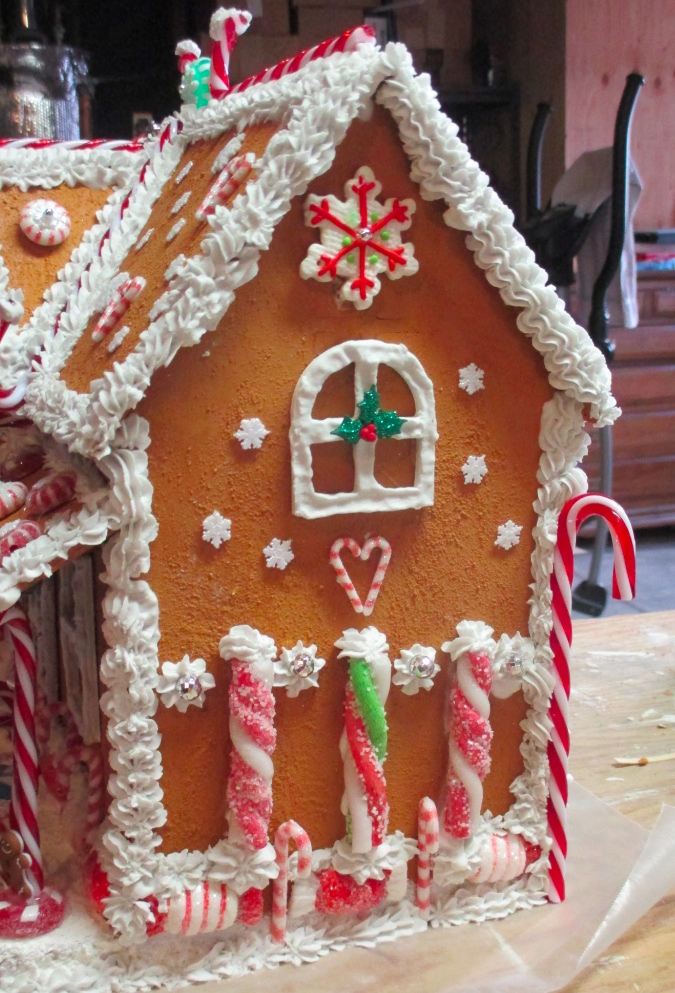 Mine isn’t totally done but here’s where I left it. The frosting on the front edge of the roof kind of hid the candy canes and buried the gingerbread men I’d glued at the apex, so I put candies over them. 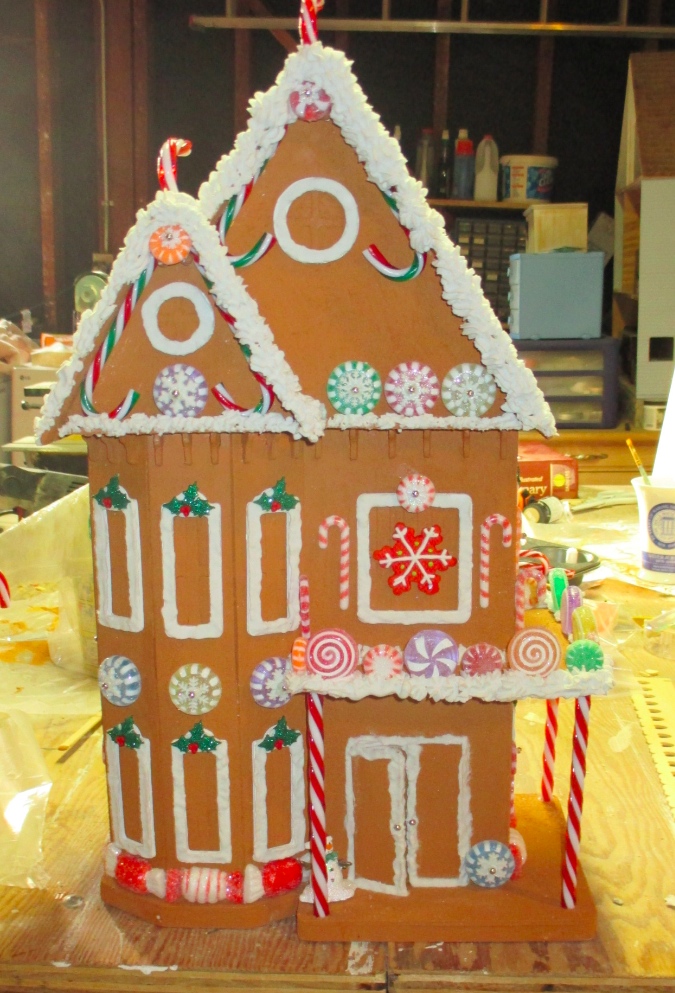 The candy canes (made from translucent plastic) can be cut with a power saw. I cut off the tops of three of them to make porch posts. 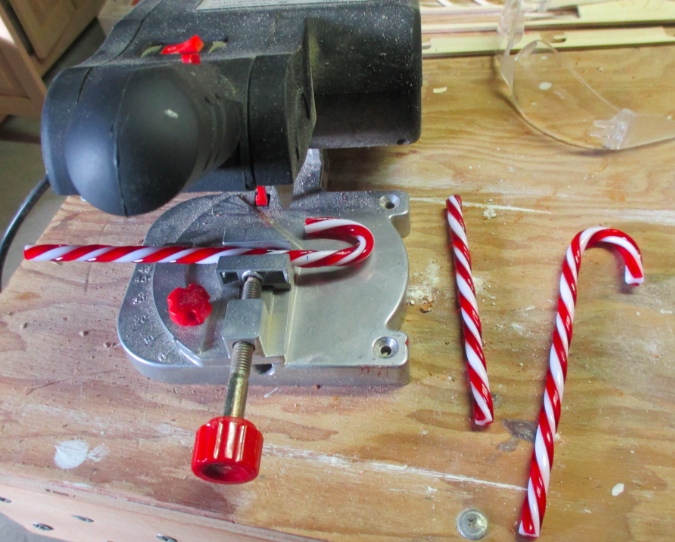 I still need to pretty up my doors, but we ran out of candy! I’d like to add something to each door, and also around/over the door. I might have to wait until next year when Michaels gets this stuff in stock again. I plan to use the Snow-Tex on the porch. 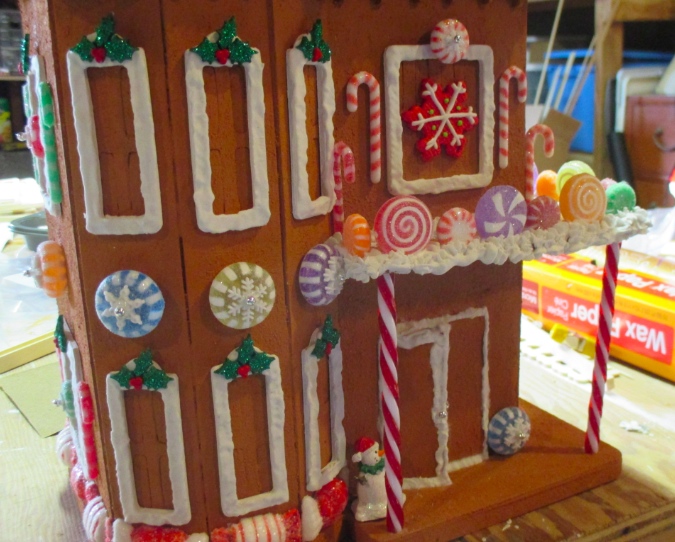 Not sure what I’ll do with my roof, either. Maybe Snow-Tex, maybe candy later on. For the time being I’m just happy it looks so much like a real cookie! 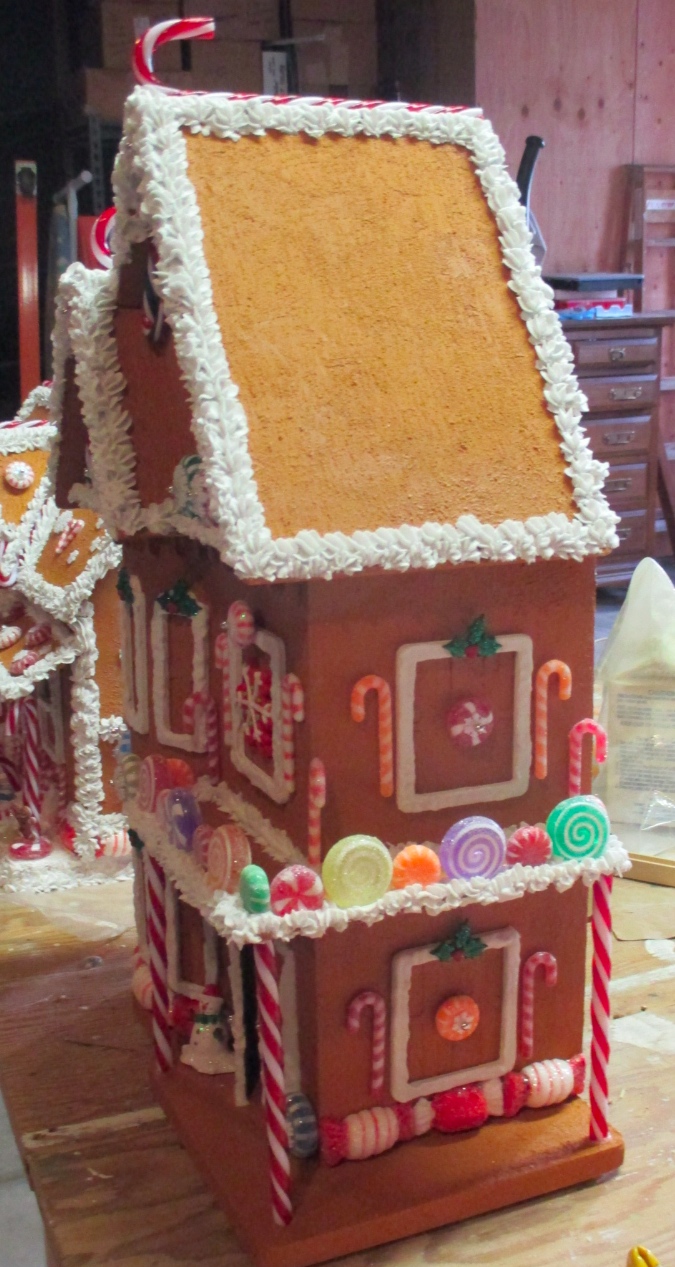 And this side is looking kind of plain. Maybe I’ll add frosting to the joints. 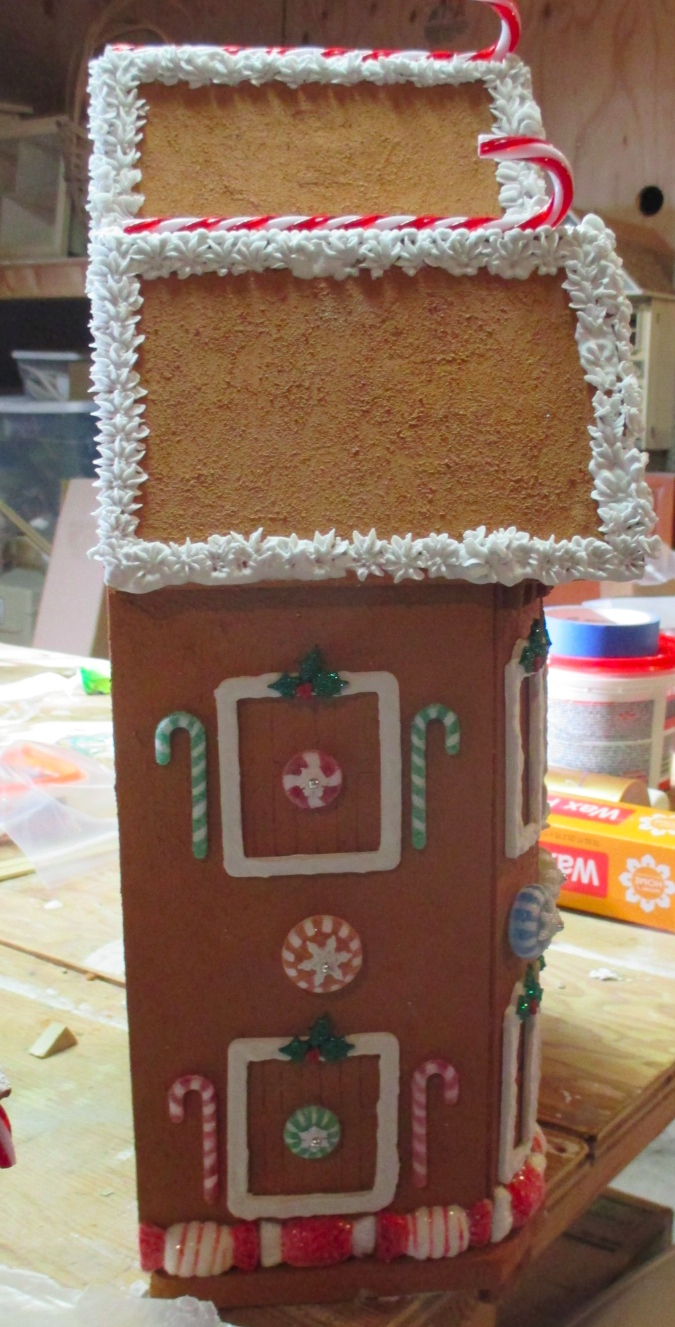 One last shot of the two houses together. Would you have guessed they’re fake? 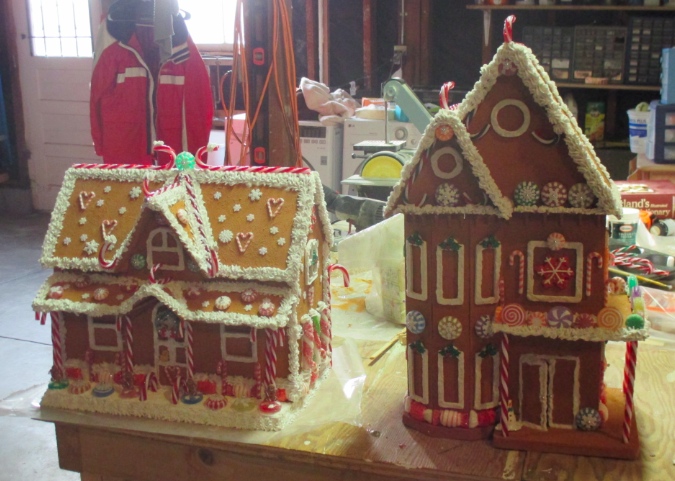 Gingerbread dollhouse – step away from the frosting!