Of the four seasons, the summer portion of my rotating roombox started out with the least obvious theme. Spring has flowers, fall has leaves, and winter has snow… what about summer? I gave the grass dead patches, but besides that there isn’t anything obvious about the base scene that really differentiates it from spring.

I’ve been hoarding a dandelion kit from SDK Miniatures for a while. I thought I could add one to the grass to suggest (along with the brown spots) that the lawn isn’t being cared for… it’s so hot that the people who live here have let the yard go. 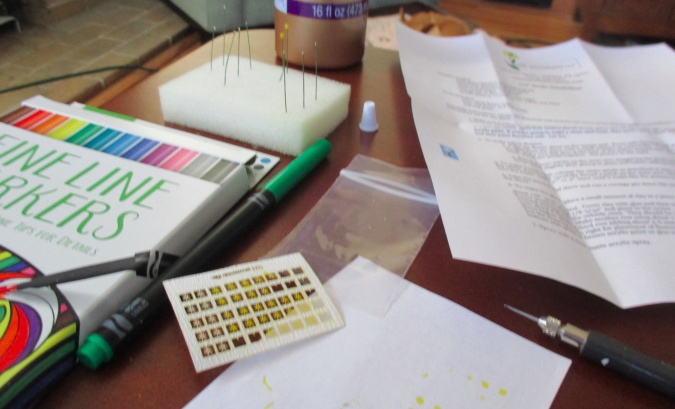 The picture on the front of the kit only shows yellow dandelions, but when I opened it I was pleasantly surprised to also find supplies for the white, “make a wish” balls dandelions turn into. This gave me the idea to use the dandelions to show the passage of time, with yellow ones in the spring and white ones in the summer. 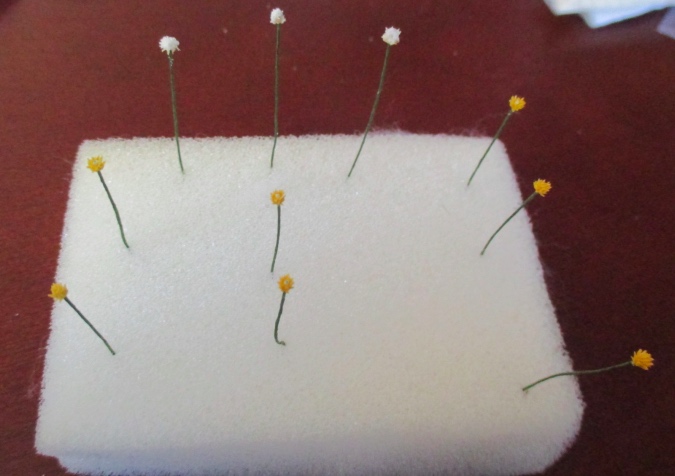 Here they are assembled. I had a horrible time with the leaves. The same thing happened with the plants in the spring planters, I just can’t get them to stick to anything. They fall over and get stuck to my toothpick and don’t turn out anything like the leaves in the picture. 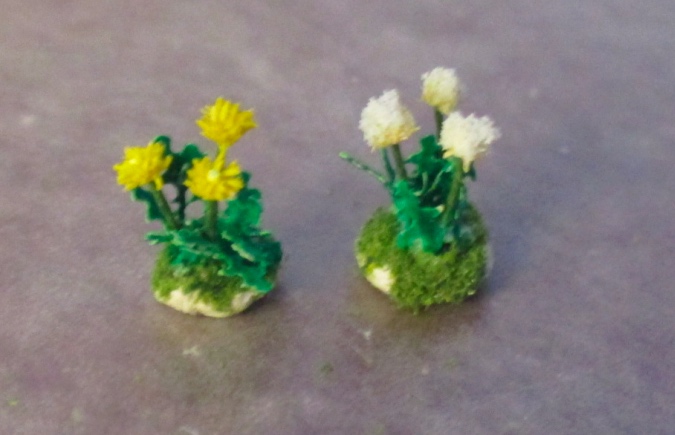 Luckily these are going to be tucked out of the way next to the door, so the messy leaves aren’t too obvious. I glued down each plant (the base is made from air dry clay) and then added crumb grass around the edges to blend in with the Noch grass. 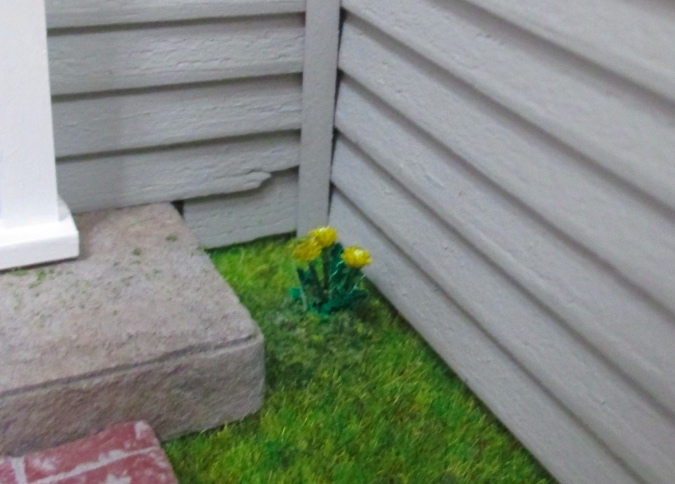 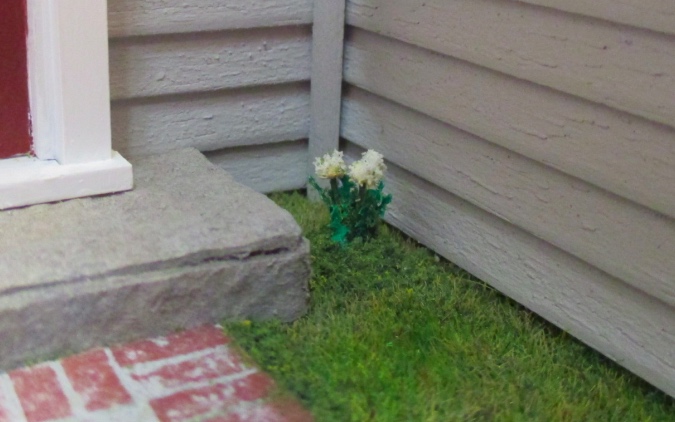 While I had the crumb grass out, I decided to fix the edges of the paths. I didn’t like that the bricks look like they’re sitting on top of the grass rather than being nestled in it.

Also, because I made the paths before I glued in the doors and stoops, the angle is slightly off, leaving a crack at the top. In fall and winter I was able to cover these up with leaves and snow. 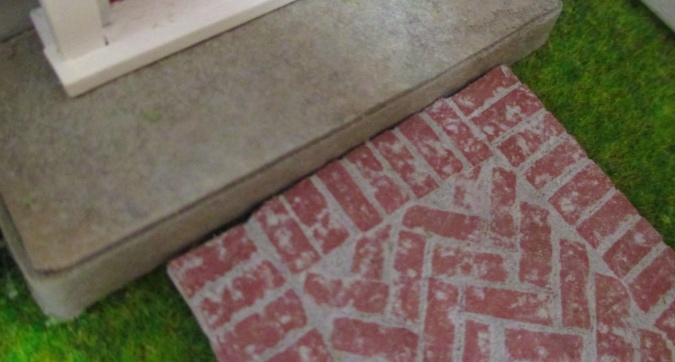 I ran a line of glue along the side of the path and spread grass into it. I used my fingernail and a toothpick to tamp grass into the crack at the top edge. 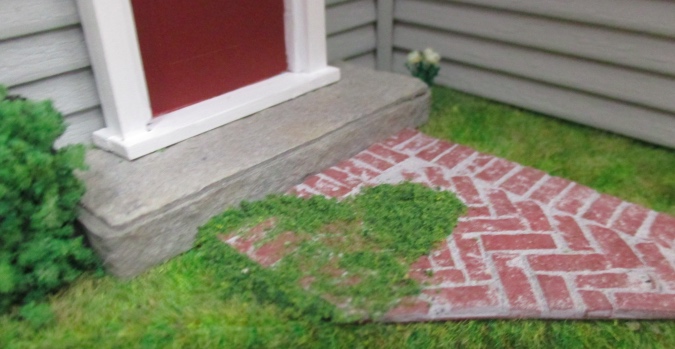 I tried adding glue between some of the bricks so grass could “grow” between them. This turned out nice when I did it between the stones of the wishing well I made last summer, but I didn’t like the look here. 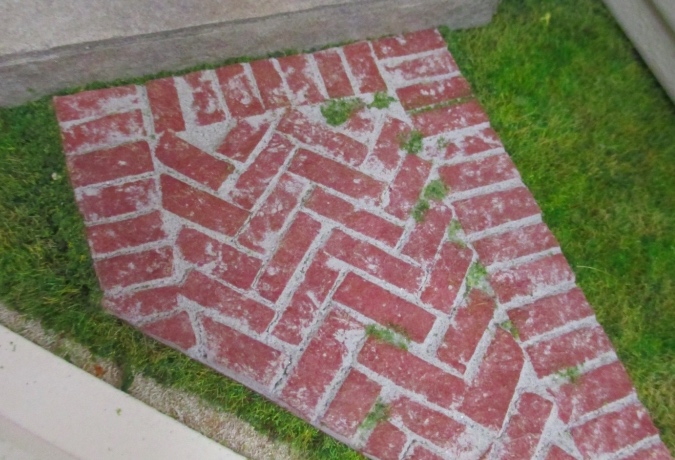 I wasn’t able to scrape it all off so I touched up the grout to cover it up. (Still wet in this picture, it gets lighter as it dries.) 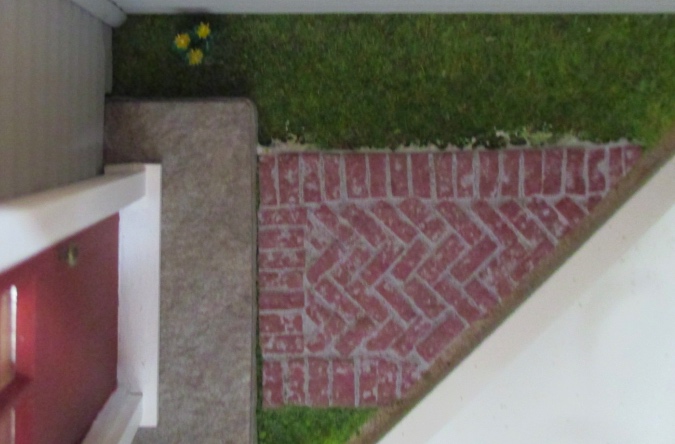 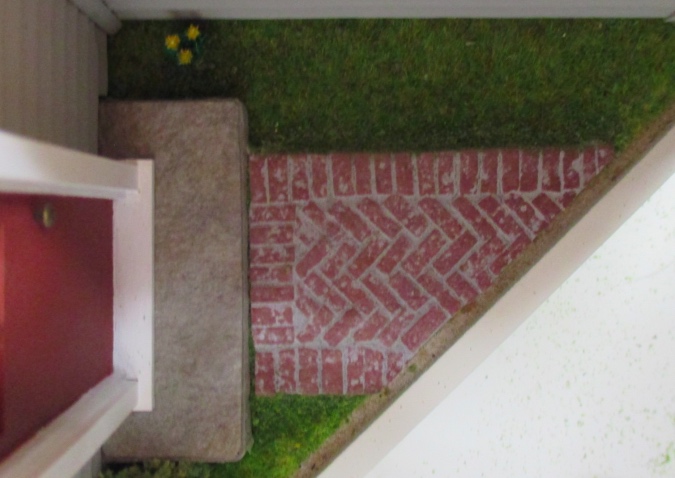 Here’s how spring looks with the dandelions and added grass. 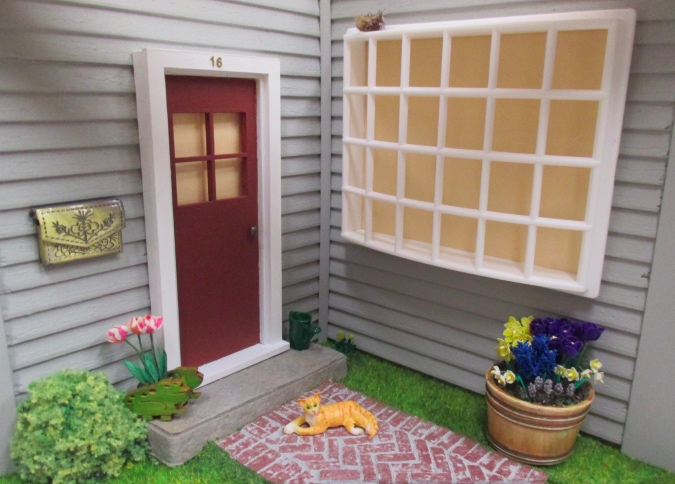 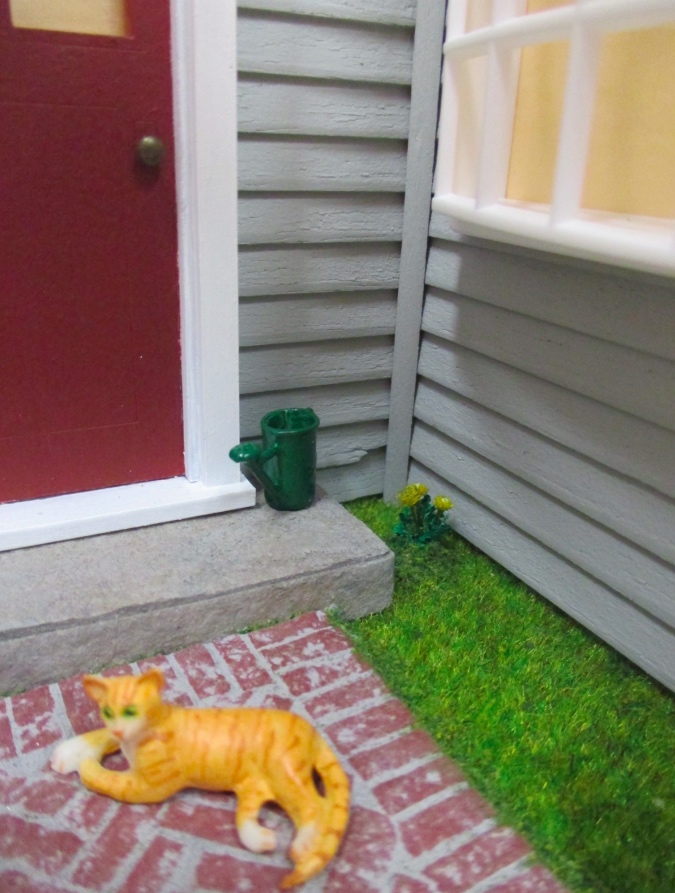 Lacking anything really seasonable to add to summer, I decided to go with the hot, lazy theme and add a lounge chair. The Adirondack chairs in my stash were too big and banged into the window, so I bought a deck chair from Shapeways. 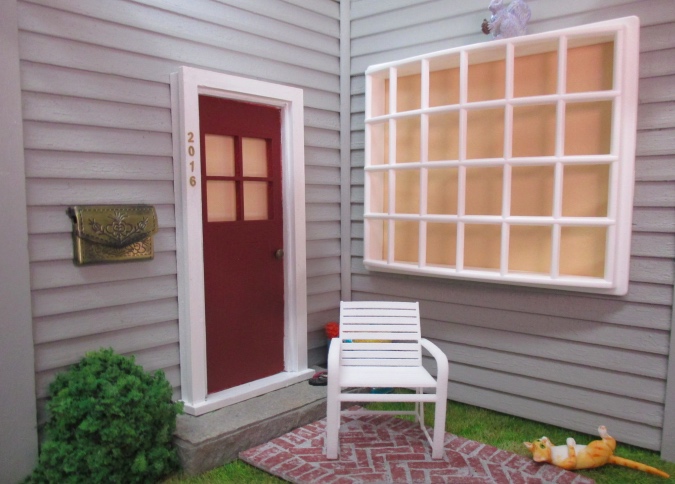 I painted the arms and sides gray. 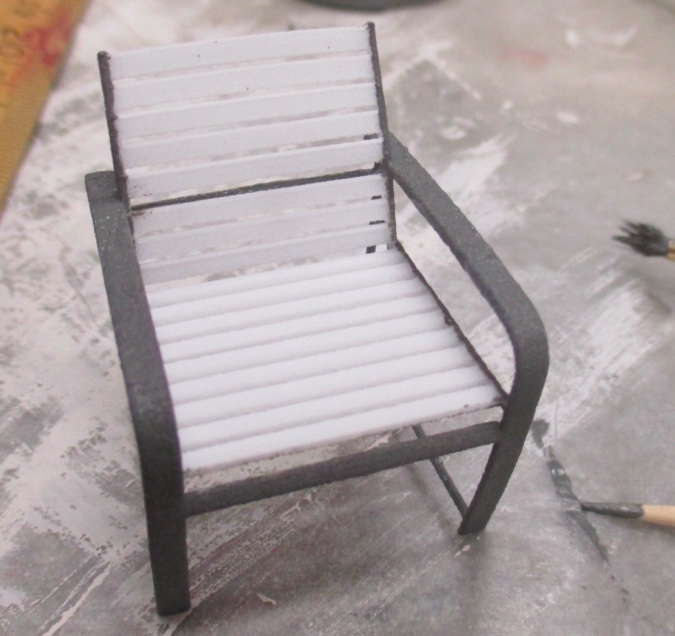 Then I painted the slats tan. After that dried, I used a toothpick to touch up the gray on the sides. 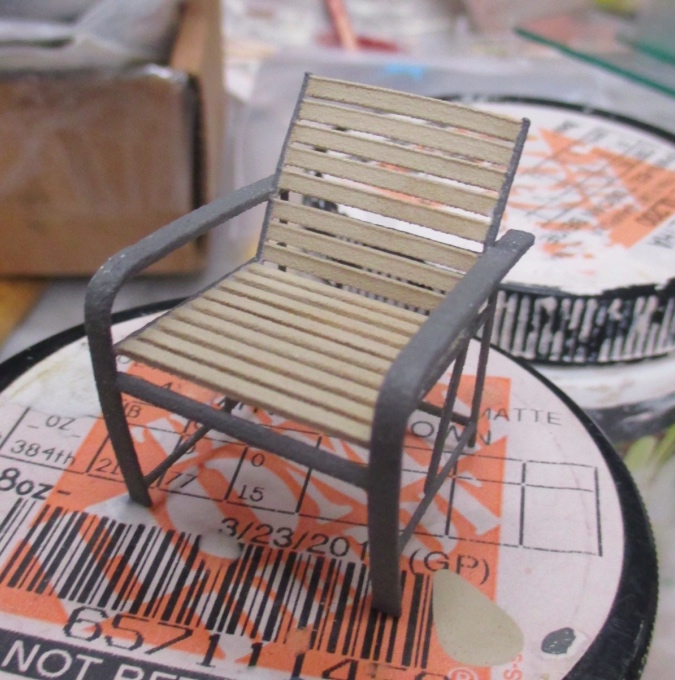 Here it is in the scene. 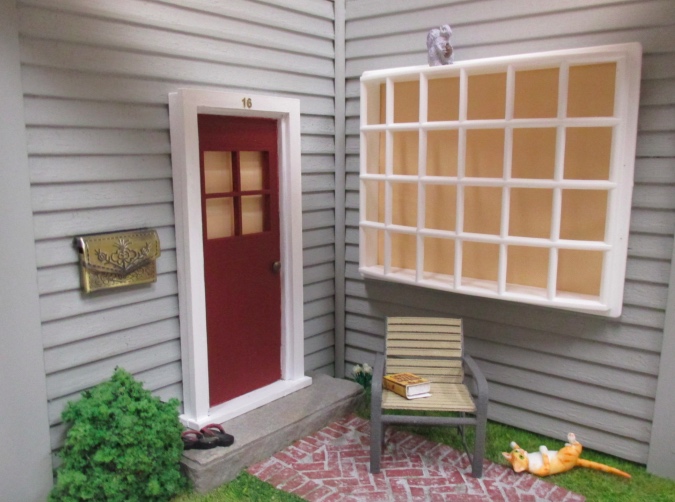 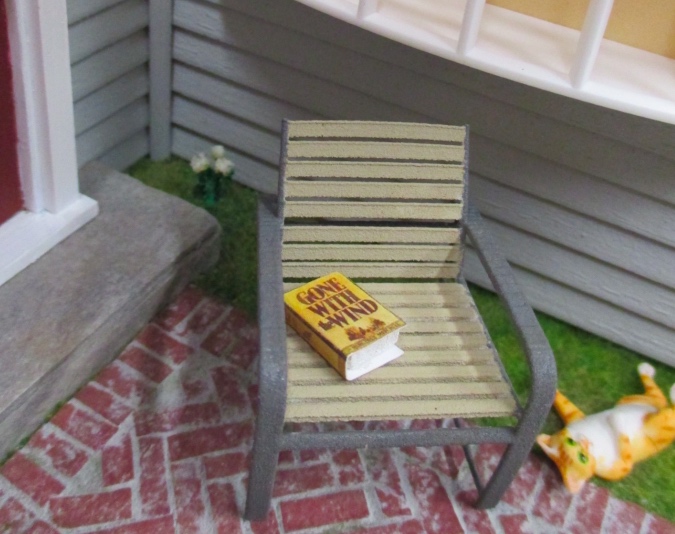 I was going to add a glass of iced tea but the glass I had (which broke off a Hallmark ornament) looked much too big next to the chair. (For good reason — the glass is half an inch tall, which would be a giant 12-inch glass in real life!) I’m hoping to find a half scale iced tea or lemonade glass that comes with a pitcher, so I can set the pitcher inside the window.