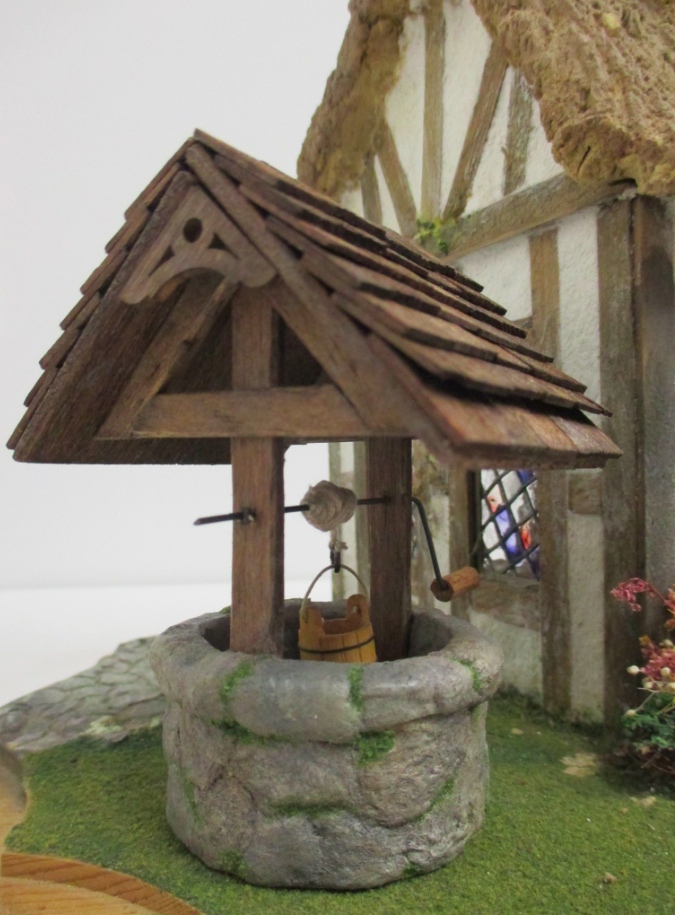 A while ago I had my eye on this resin wishing well from Miniatures.com. At $28 it’s pretty pricey, but I thought it wouldn’t be too hard to make something like that and tucked the idea away. Now that I’m working on the Thatched Cottage, I decided to give it a try.

Read on for the step-by-step of how I did it. I’ve included a parts list at the bottom with dimensions for each of the pieces. My well is half scale (1:24) but you could double the dimensions to create a 1:12 version. 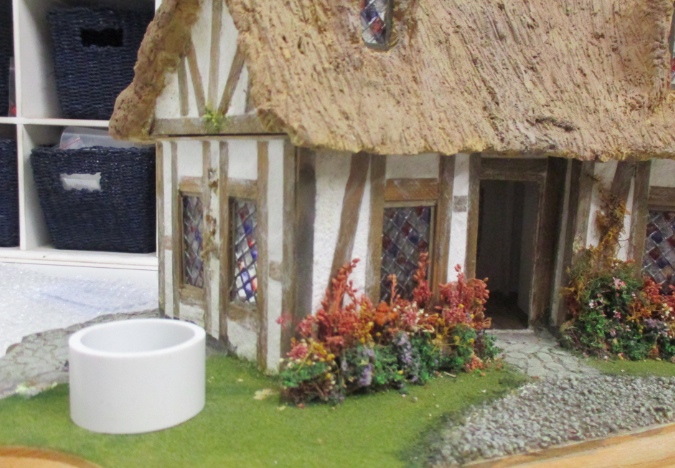 I painted the pipe gray as a base for the stonework. 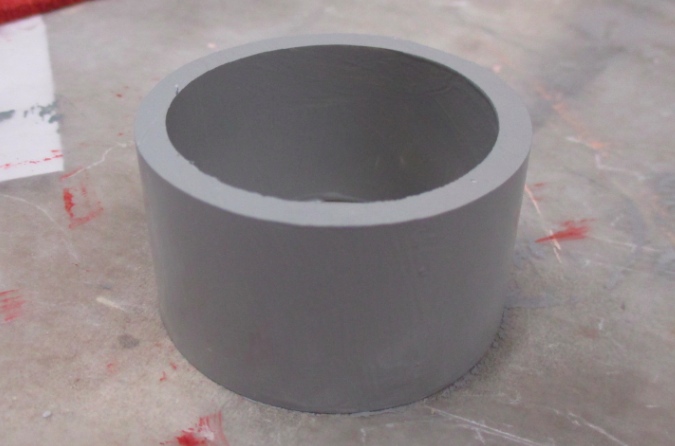 While the paint was drying, I cut support pieces from 5/16″ x 3/16″ basswood. The roof pieces are from a scrap of 2-1/2″ wide luan plywood that some trim I recently purchased was taped to when I received it in the mail. 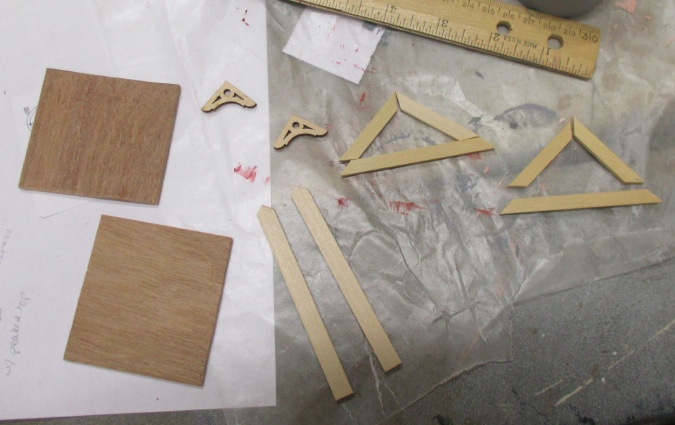 The decorative corners are Northeastern Scale Lumber BRE-1 brackets that I’ve used in various other places, like the Victorianna’s bay windows and the Gull Bay dormers. These aren’t listed on Northeastern’s website anymore, which sadly may mean they’ve been discontinued. They are totally optional for the well, or you could substitute another right-angle bracket or small apex trim.

The last major component is a 1:12 spit fork from Olde Mountain Miniatures. Alternatively you could make something like this out of wire; I bought it because I was trying to fill up a shopping cart enough to get free shipping and it seemed like it would work.

I shaved the sharp corners off the support pieces with a utility knife, to make them look rustic. 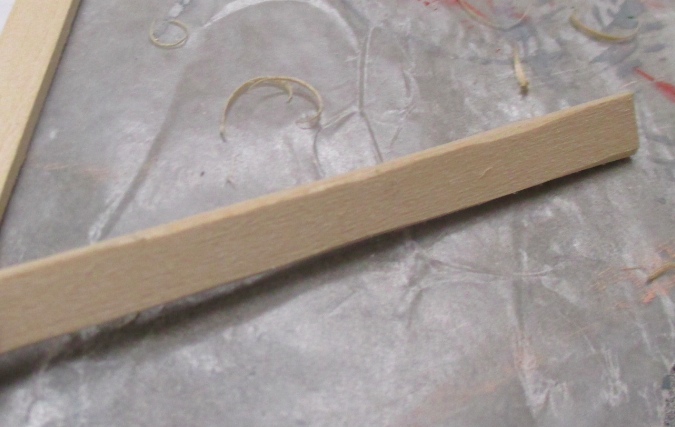 Then I stained all the wood pieces with Minwax Special Walnut. 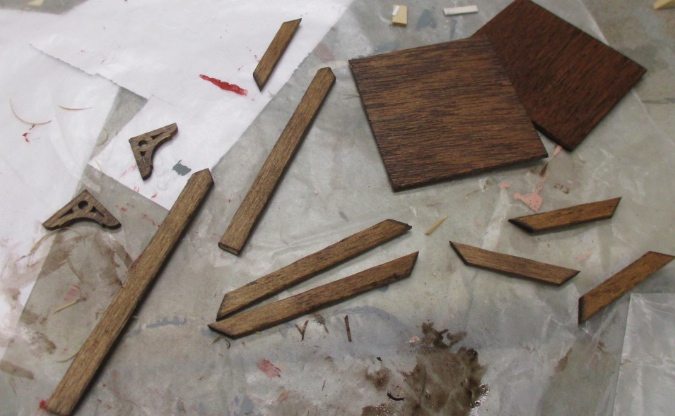 This was my initial vision for the supports and roof. 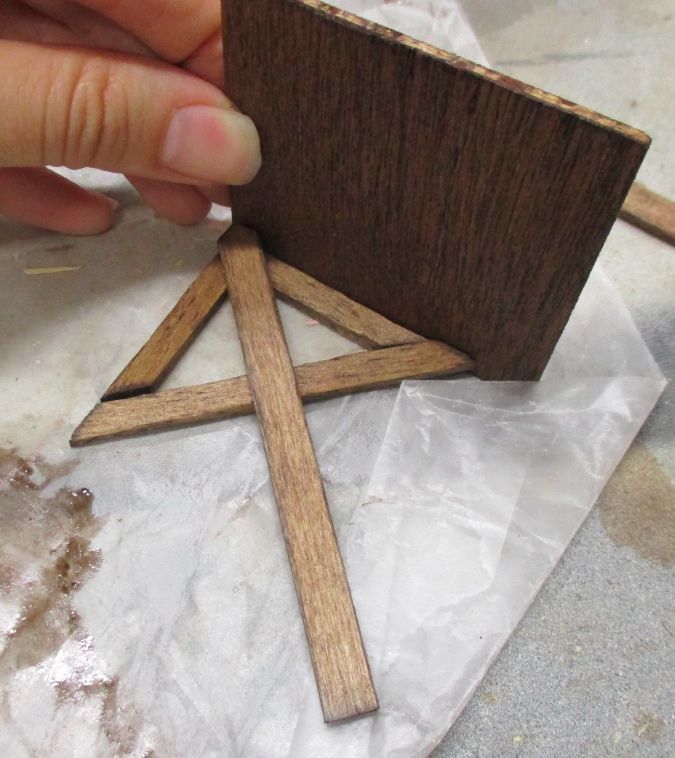 I put the base against the side support to get an idea of where the roof would be, and drew a pencil mark for the hole for the handle. I put the two side supports next to each other and marked the second one so they’d line up, and then drilled out the holes with my finger drill and a bit slightly larger than the spit fork. 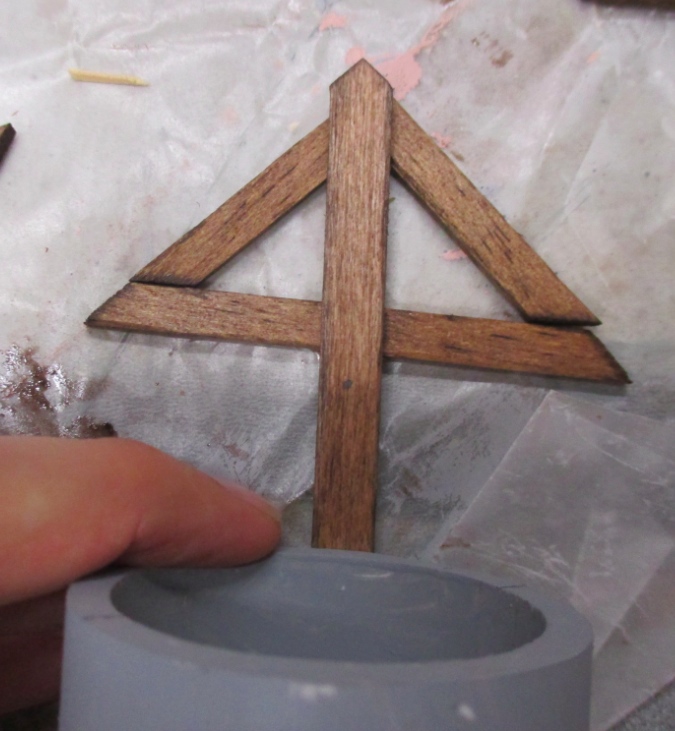 With the spit fork inserted and pieces of scrap wood on the sides to ensure the supports were level, I glued the two vertical support pieces to the inside of the PVC using Quick Grip. The supports go all the way to the bottom of the base. In a lot of the pictures I looked at for reference, the support either sits on top of the base or only extends a little bit into it, but longer supports that go all the way down ensure the tops and holes line up properly once they’re glued in. 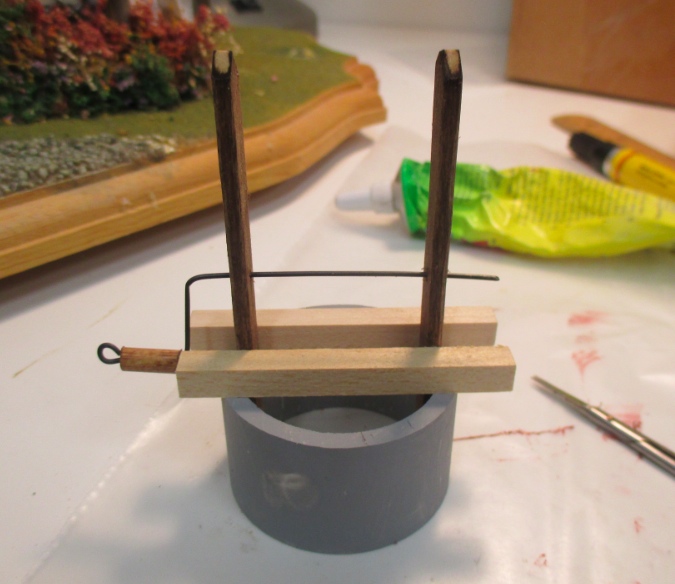 Next I tacky glued a few strips of egg carton material around the top of the base, to form a lip. 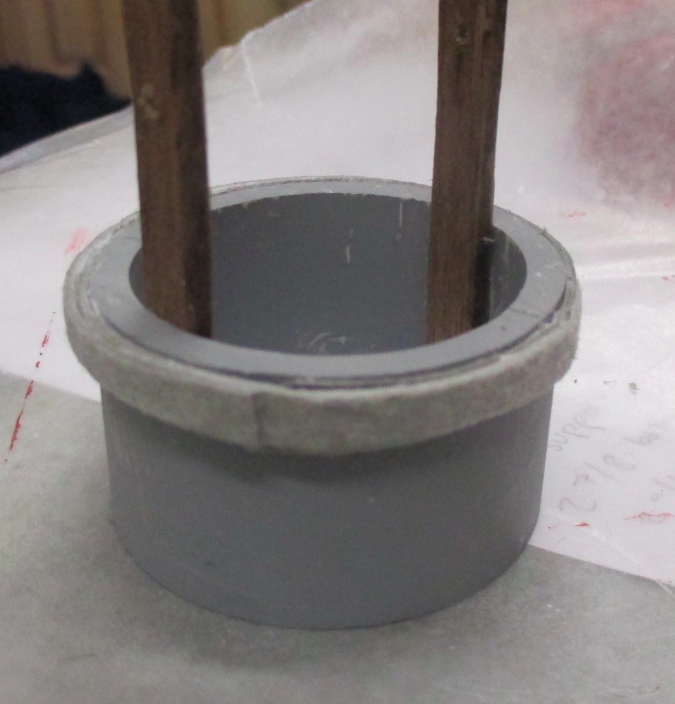 Then I “stoned” the base with egg carton scraps. That process is described here. 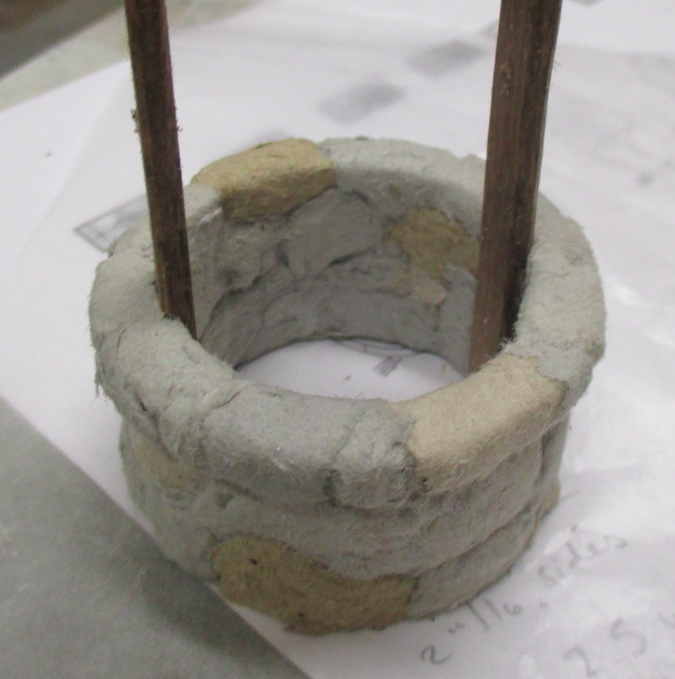 Next I splatted on various grays and browns with a dry brush, then painted the stones with satin varnish. This was an unintentional deviation from my usual egg carton stone process… usually I use matte varnish. I’m not sure what the difference was — a different brand of varnish (Delta Ceramcoat instead of Craft Smart), or the satin finish, or just something wrong with this particular bottle — but I was really unthrilled with the result. The varnish was very thin and wet and brought out the egg carton fuzzies in a way it never did before. 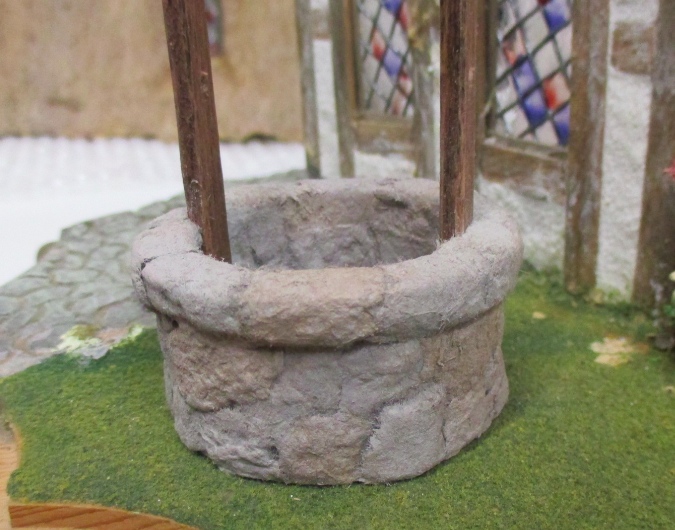 Compare that photo to this one and maybe you’ll see what I mean. This is how they usually turn out.

I went on to fix it a few steps later, but for now let this be a warning: no satin varnish on egg carton stone!

Back to the supports. With the vertical supports glued in, I held up one of the roof pieces I’d cut and decided it was way too big. I decided to make the triangular roof support smaller by cutting down the horizontal piece that would have gone under the diagonals, so it instead goes between them.

Then I cut down the roof pieces by about half an inch. One roof piece is about 1/16″ larger than the other so it can overlap at the top. 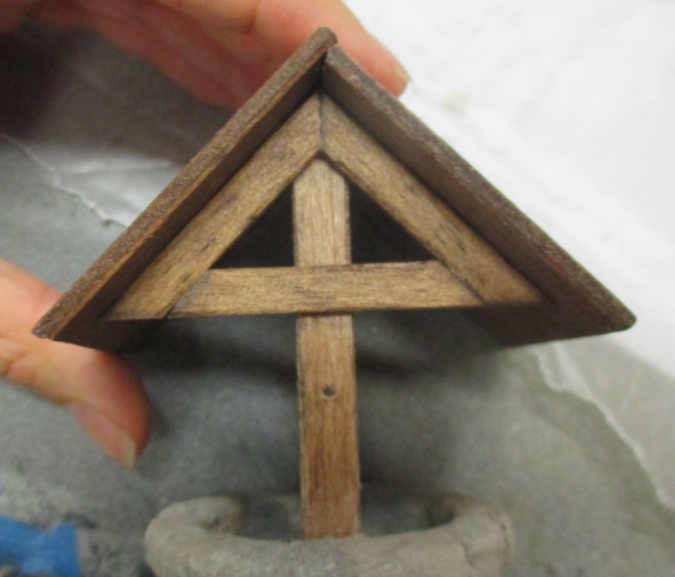 I glued the roof supports on to the side supports. 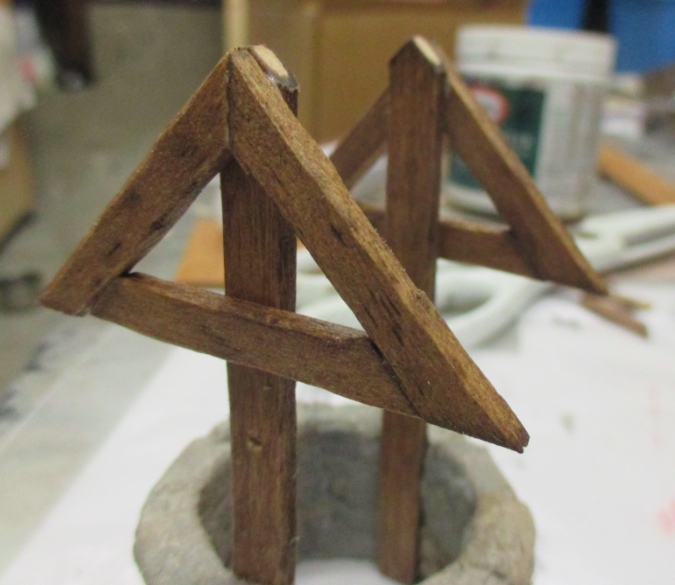 Next I glued on the roof pieces. Also, this picture shows the stones with new paint (sorry it’s out of focus!) I added several more shades of gray and brown with the dry brush — there’s not really a method to it, I just kept at it until it looked better. I also splotched a little bit of gray on the wood pieces, to weather them. When the stones were dry, I then applied *matte* varnish like I have in the past, and left the whole thing alone to dry overnight.

The roof didn’t look too bad the way it was, but I’d been planning all along to shingle it so the seam at the peak was kind of messy. At this point I stained the shingles. I didn’t need very many so I was able to use leftovers from another project. 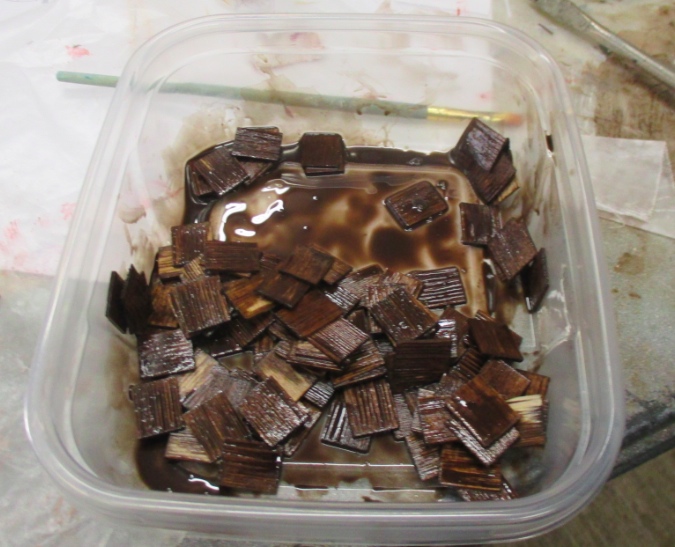 Entirely by accident, the roof (2-1/2″ wide) is the width of exactly five shingles. 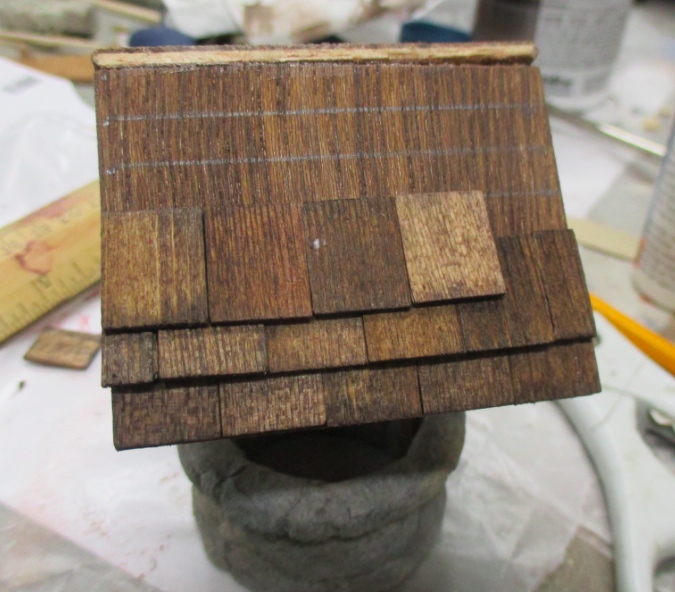 For the rows that have a half shingle at each end, I stained the cut edge of the shingle with a stain pen and also turned it inward, so the visible edges would all be sharp and dark. Usually I’d add trim to the sides of the roof and at the ridge cap, but on this little structure I didn’t think it was necessary. I added the 90-degree brackets to the apexes — totally optional, but I think it’s a nice touch. 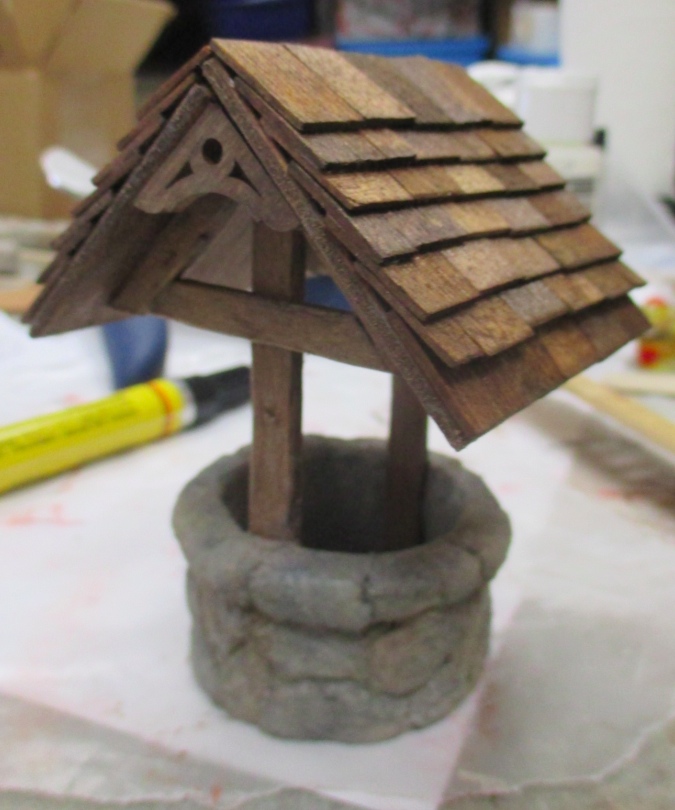 I’m much happier with the stones now. I used a toothpick to apply tiny amounts of tacky glue to some of the joint lines, and added fine model grass to look like moss. 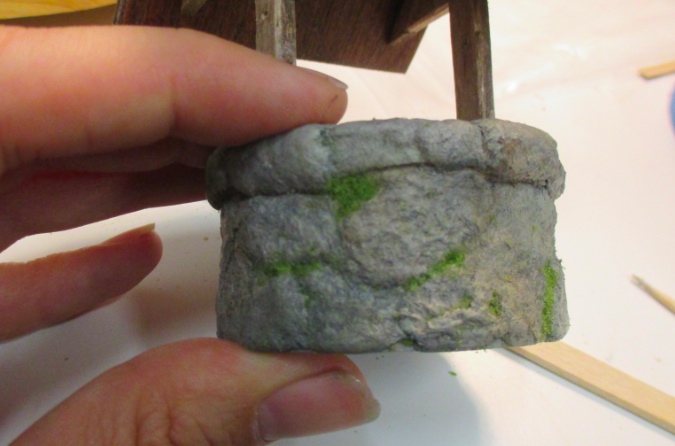 I didn’t add moss to all of the grout lines… didn’t want to overdo it. The matte varnish gives the stones a hard shell that was lacking after the first attempt 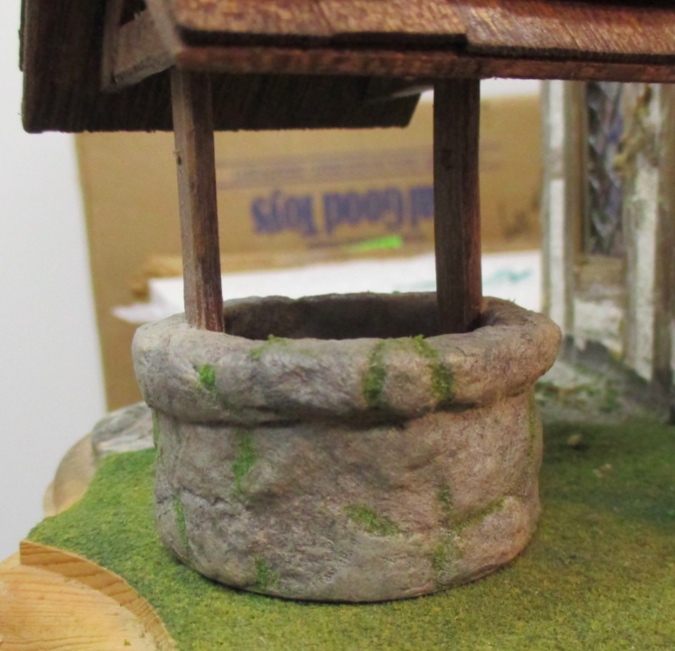 The final step was to add the bucket. This bucket is one I already had, about half an inch tall. I added a jump ring to the handle, then tied a piece of DMC floss around the jump ring. (The jump ring started out silver; I colored it with bronze Sharpie and then black Sharpie, to give it an aged look.) 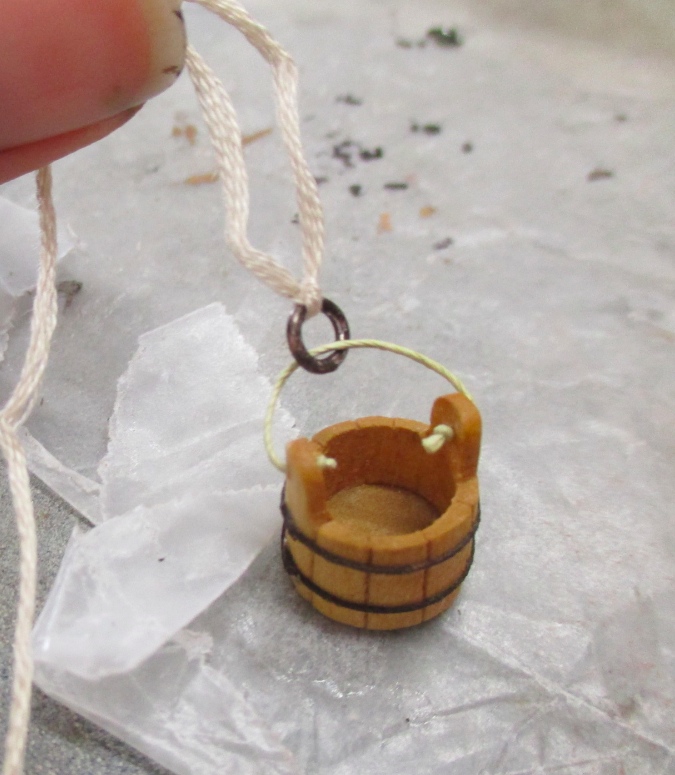 I inserted the spit fork and tied the other end of the DMC to it. This has to be done with the wire in place. Leaving a long tail for the knot makes it easier to tie. (Cut the tail off after you’ve tied it!) You can reach up through the bottom of the well to wrap the string and bucket around the wire. 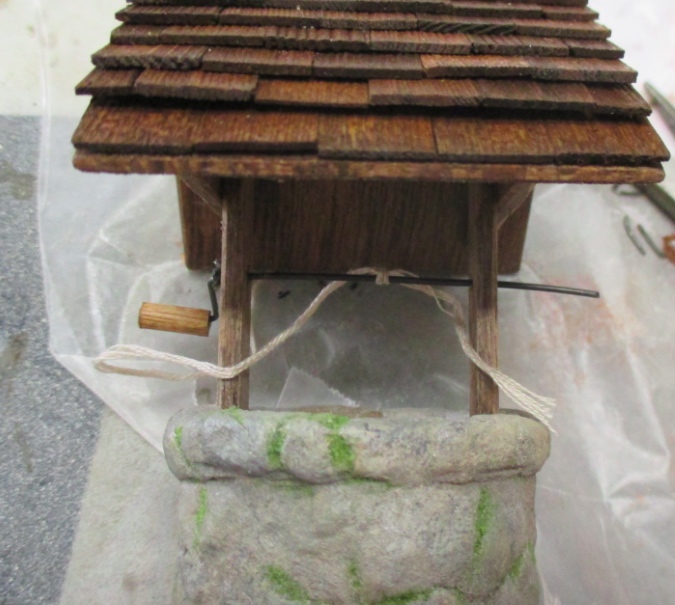 I snipped the loop off the end of the spit fork, since it looked out of scale, and applied tacky glue to the wooden handle to keep it from slipping off. I also snipped the prongs off the fork pieces, and then used the tiny pieces that remained as stops to keep the wire from sliding around — they’re glued onto the wire with a tiny dab of tacky glue. 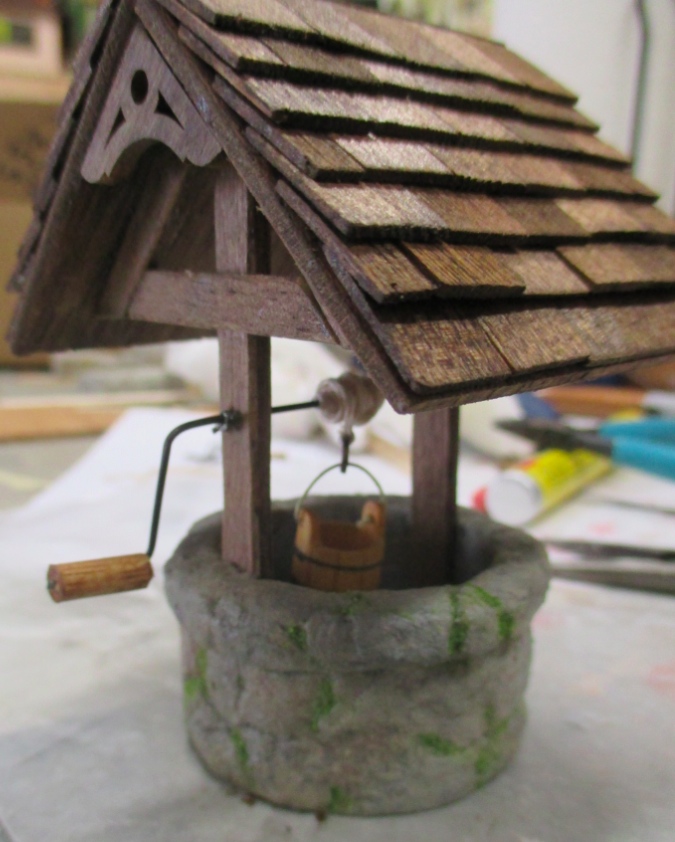 And that’s it! Make a wish! 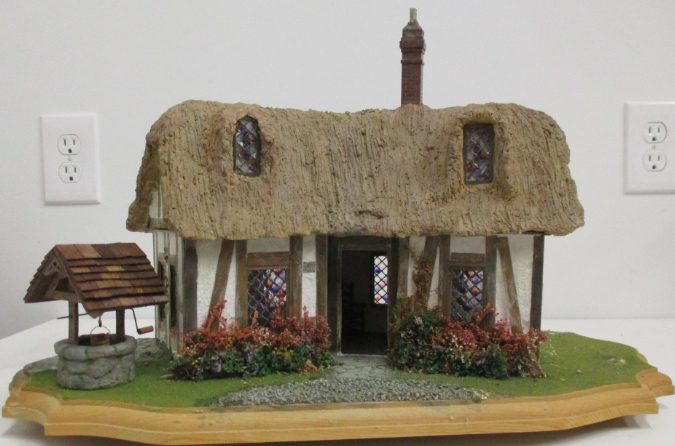 These dimensions are for a half scale (1:24) wishing well. To make a one inch scale well, just double all of the dimensions.