The final room on the Victorianna’s top floor will be a nursery, and I took a break from the master bathroom to wallpaper it. (This needed to happen before I could glue in the door between the two rooms and finish the trim in the bathroom.) This is an Itsy Bitsy wallpaper that I bought way back when. I was able to do both of these walls with one piece, so there’s no seam, and I have enough left over to do the outside of the tower. The inside of the tower will be different — still working it out in my head, so I’ll leave you in suspense for now! 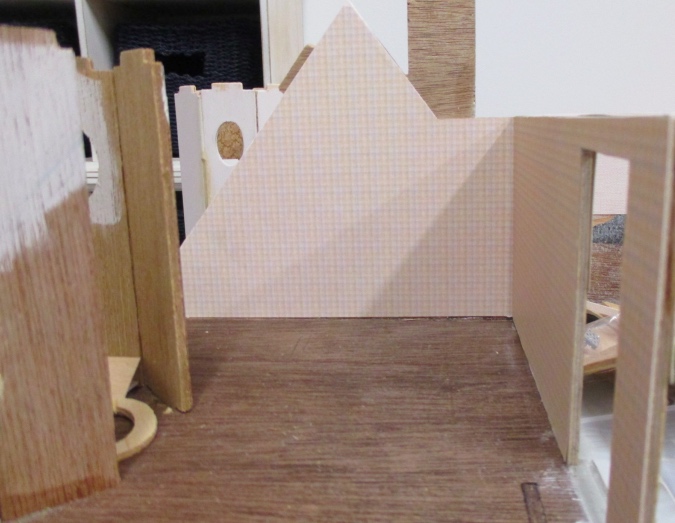 Like in the girl’s room downstairs, I cut the border off the top of the wallpaper and glued it on more at a kid’s eye level. I’ll add trim to the top and bottom edges. 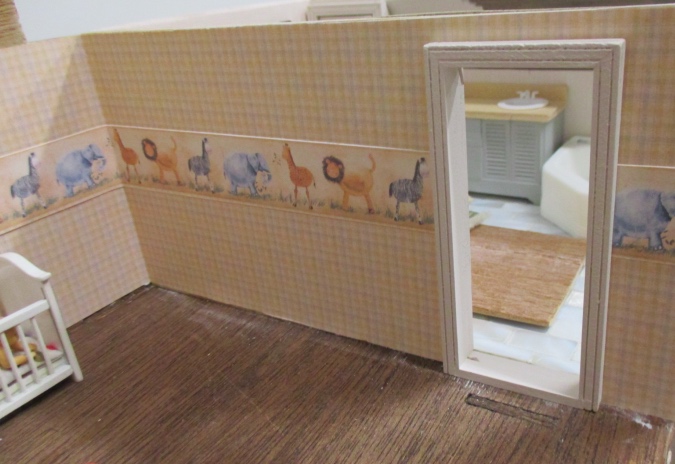 A few hours later — after the glue dried, of course — I started playing around with furniture. I’d been planning to use this cute hand-painted wardrobe (made by Pam Junk and Cheryl Hollis) in the downstairs room but ran out of space for it there, so I was thinking I could put it in this room instead. But the colors and animals weren’t quite right (the safari animals would gobble up those swans!), and tucked into the corner it would be hard to see. 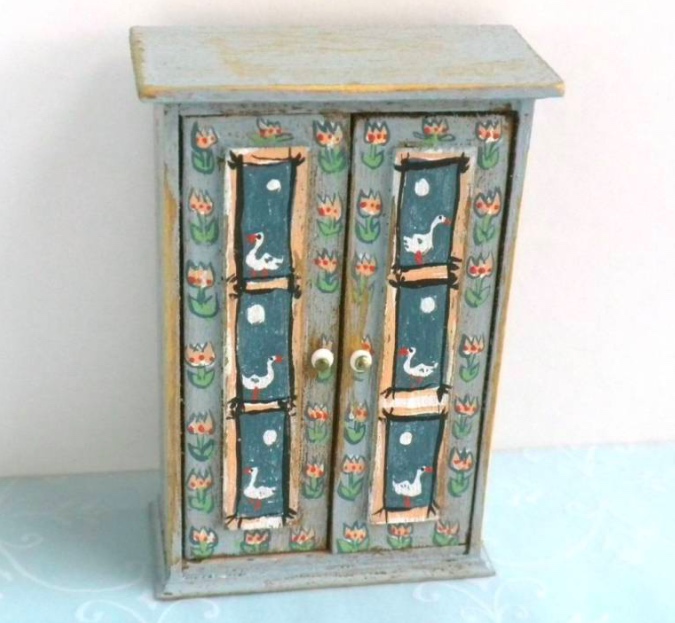 Then I remembered this corner bookshelf I bought years ago from A Trifle Small. (Houseworks has since started making one that’s similar.) I love how it looks in the corner, and it’s tall enough that I can turn it into a built-in, but my eyes keep going to that zebra butt sticking out the side. In the downstairs bedroom I was careful to do the border in a way that didn’t chop any animals in half. Same with the elephant to the right of the door in the baby’s room. 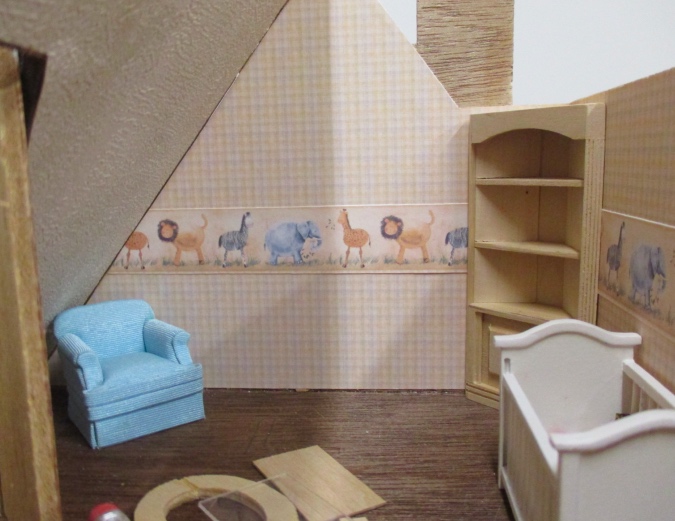 I only have two tiny scraps of border left — just enough to do the outside of the tower walls. I thought about trying to slice the border in the corner while the glue was still tacky and pull it off but that seemed like a disaster waiting to happen. In yet another case of Doing Something Complicated to Fix a Tiny Problem, I’m thinking of building my own corner cabinet that’s a little wider so it covers up the zebra’s butt. I know, I know. I’m a weirdo. 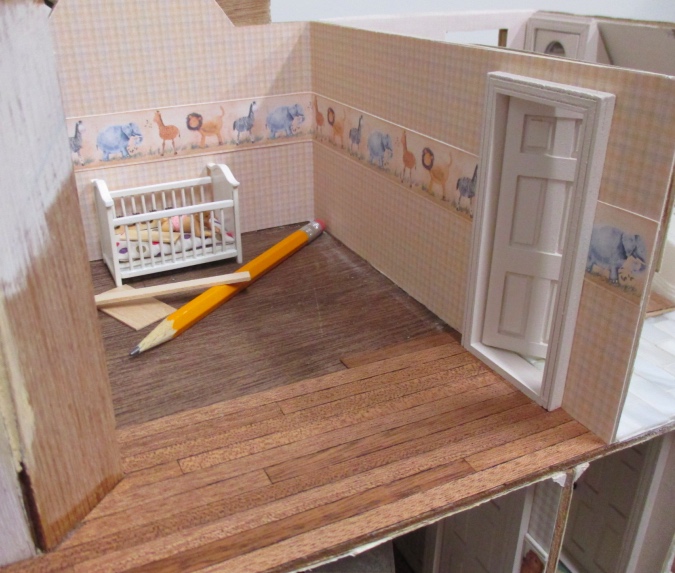 Moving on! After gluing in the door, I went ahead and did the hardwood floors, because they’re relaxing. Hard to believe it’s been more than two years since I did the first floors in the Victorianna. Will this house ever be finished?! (*ahem* Not if I keep doing unnecessary work like scratch building linen closets to cover up wallpaper seams and cabinets to cover up zebras’ butts. *ahem*) 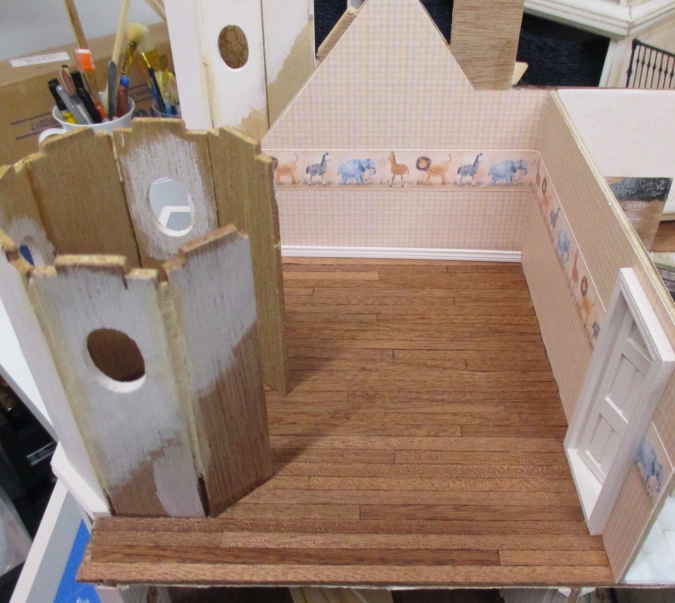 Here’s the basic idea for furniture layout. I’ll put a changing table between the chair and shelves, cross stitch a rug, and add some baby toys to the floor. (I wonder if anyone makes a half scale potty chair?) I also have a cute mobile to hang from the ceiling. 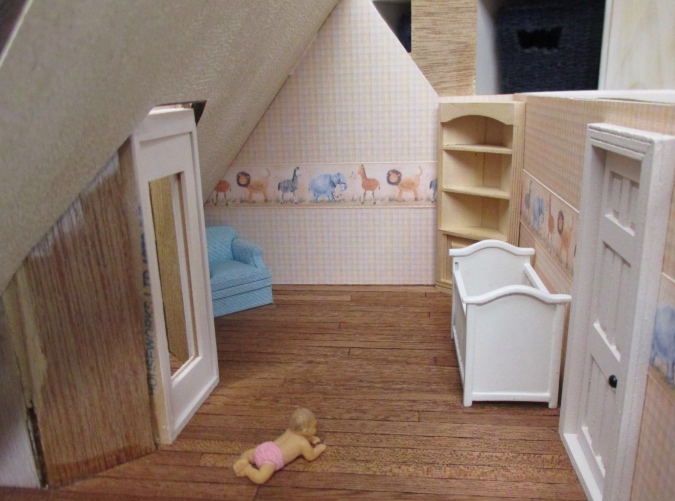 There’s still a lot to do before the roof pieces can be glued in, but here’s a gratuitous skylight picture. :) 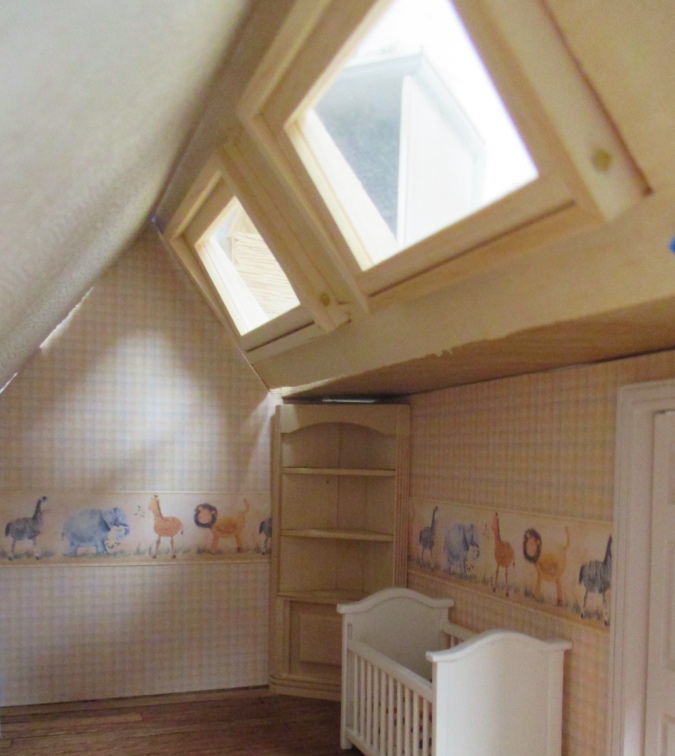