I’m at the point where I could attach the Victorianna’s roof, but after spending so much time shingling the Rowhouse I just don’t have it in me to do another roof right now. So I moved on to the last room in the house: the kitchen.

I wanted to use the same tan wallpaper I used in the second floor bathroom (which has the same texture as the pink wallpaper used in the rest of the house), but I don’t have any more and it’s discontinued. Instead I papered it with a heavy off-white scrapbook paper that also has some texture to it. 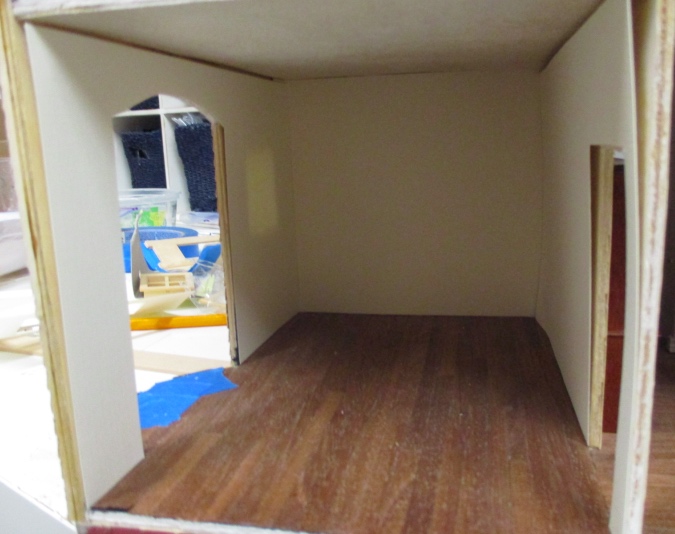 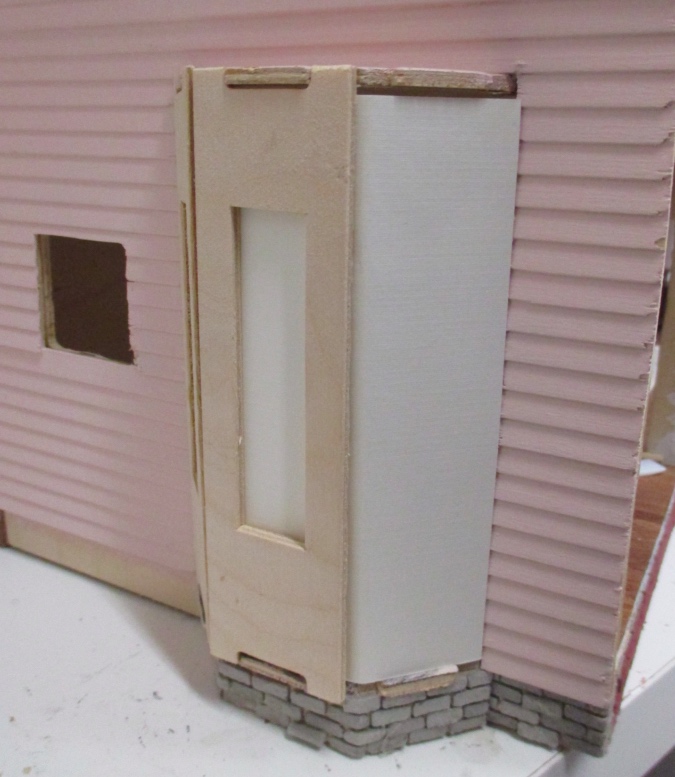 I put that wall panel back in, creased the paper at the joints, and cut out the window holes. 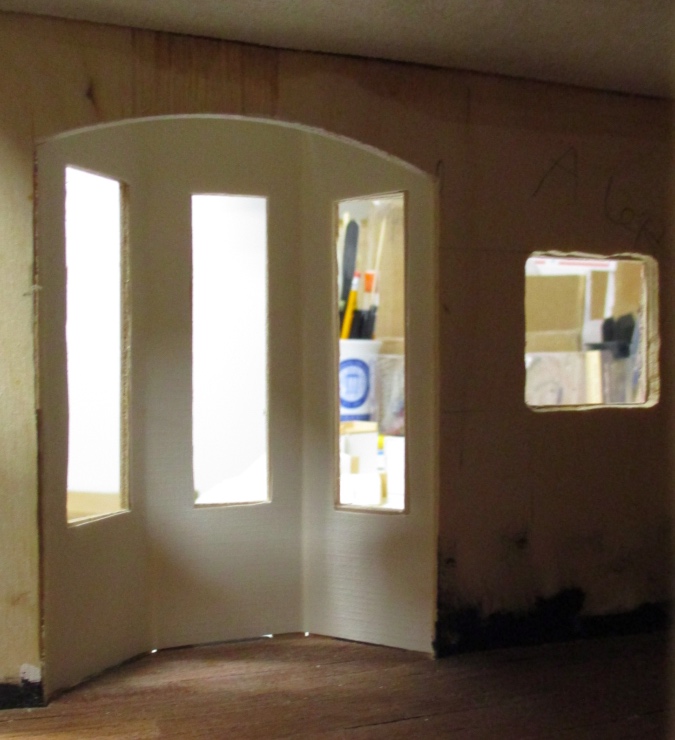 Then I removed the wallpaper from the opening and glued the three wall pieces together. These are only glued to each other, not to the house yet. 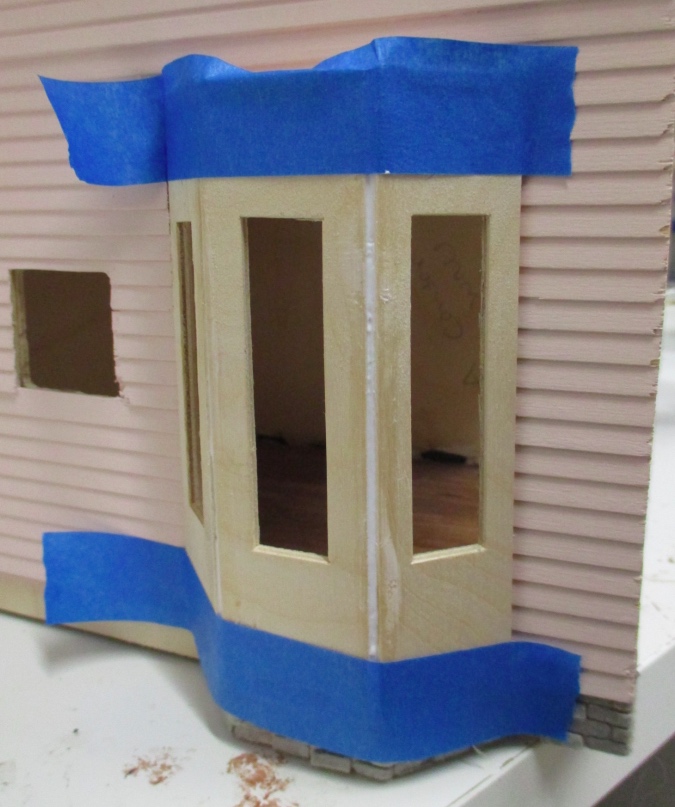 When the glue was dry, I was able to remove the assembly to add wallpaper and trim. This was much easier than doing it with the bay window in place (which is how I did the other four). 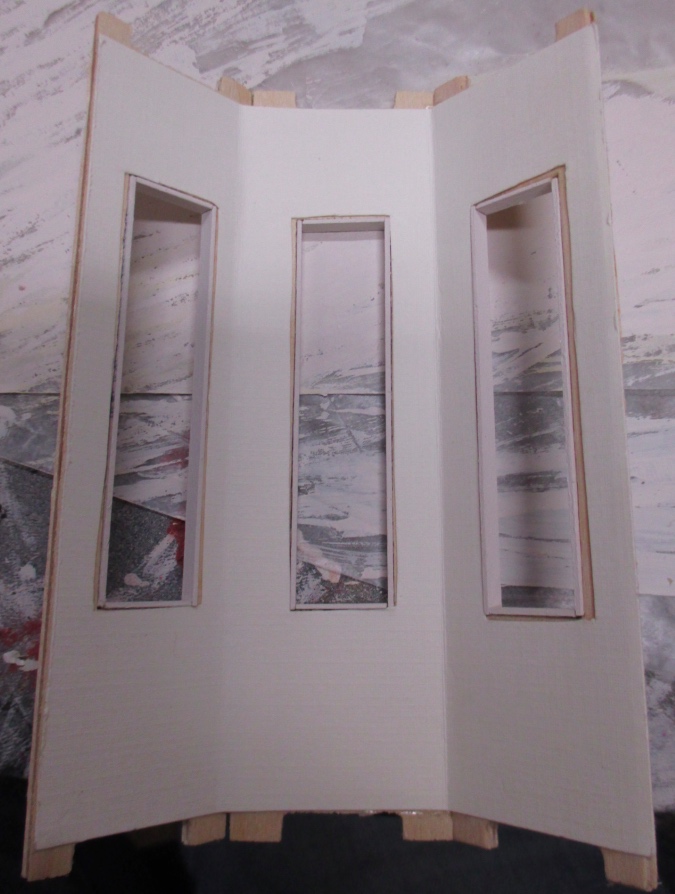 I added painted strip wood to the inside edges of the window holes. 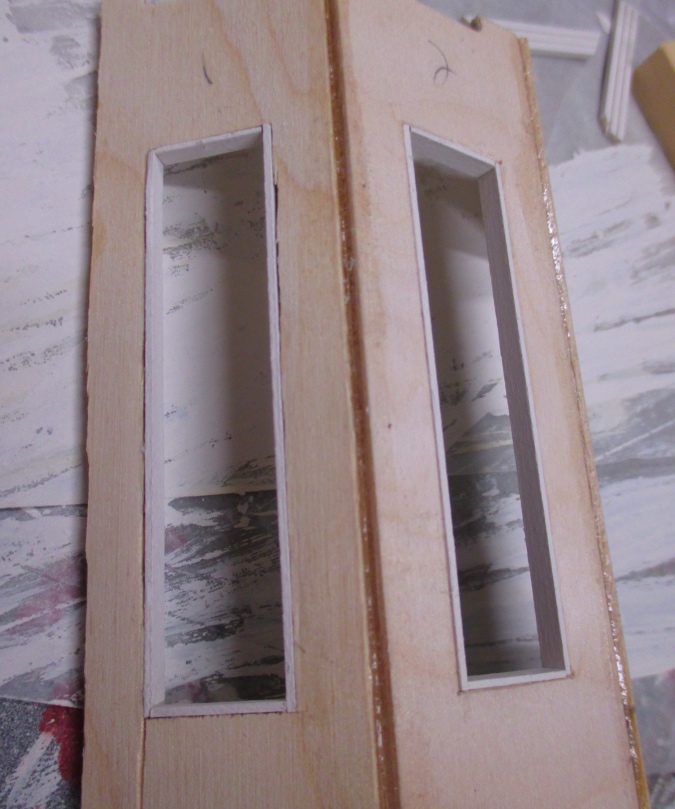 Then I glued in the interior window trim, cleaned up the seams with wood filler, and touched up the paint. 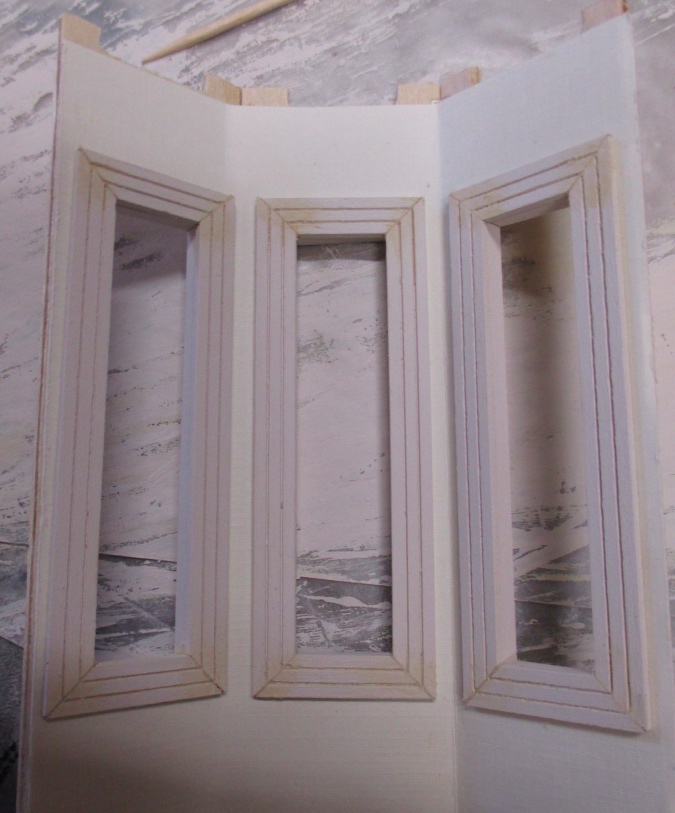 Next I added strip wood to the edges of the archway. While the glue was still tacky, I popped the bay window back into place to make sure this trim wouldn’t bump into the window trim. (It didn’t.) 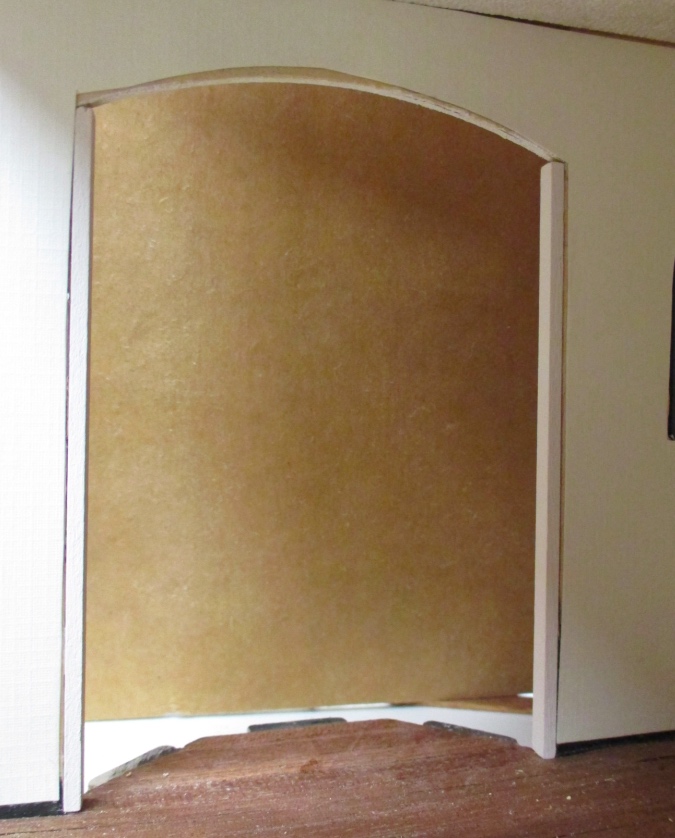 With those side trim pieces in, it was time to build the window seat. This octagon piece is left over from the 1:48 scale gazebo I bashed into a cupola. It just happens to match the width of the bay window walls. 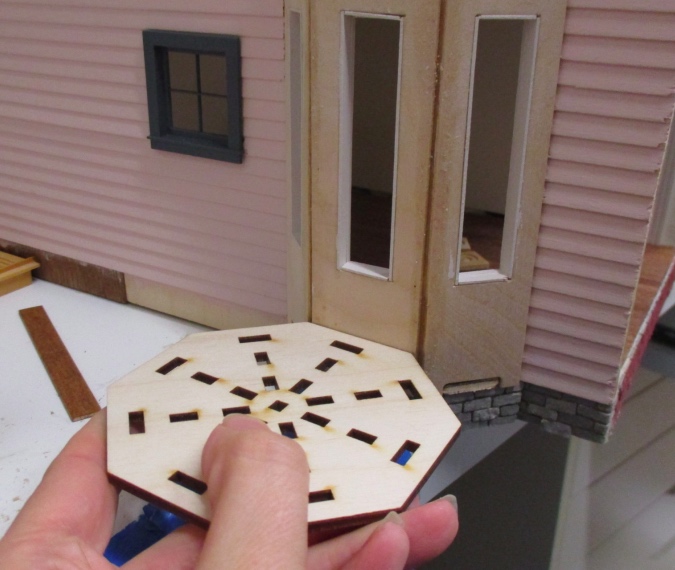 I used a utility knife to cut down the octagon. 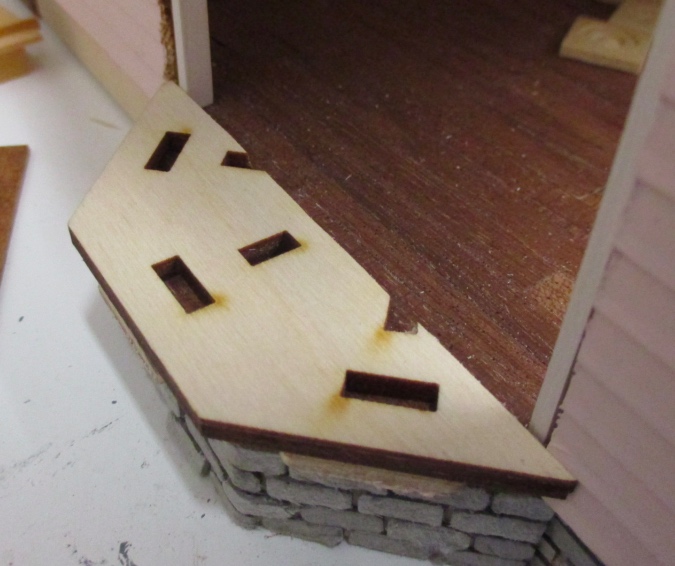 The corners needed to be cut off for it to fit in the opening. 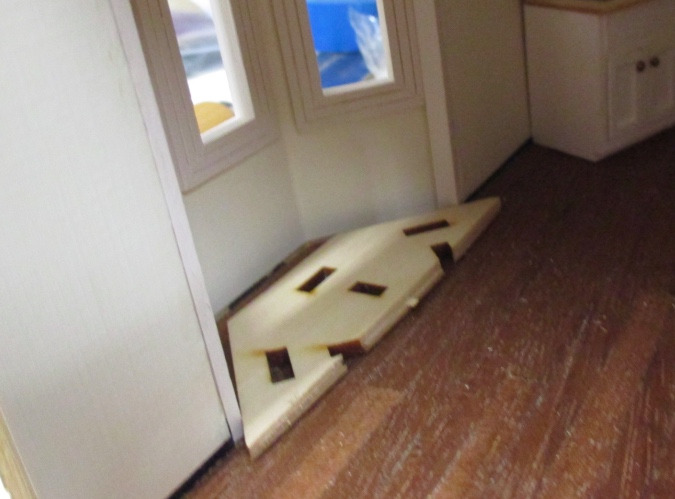 Based on where the piece was hitting the sides of the opening, I marked where I thought I should cut, but I got it wrong. 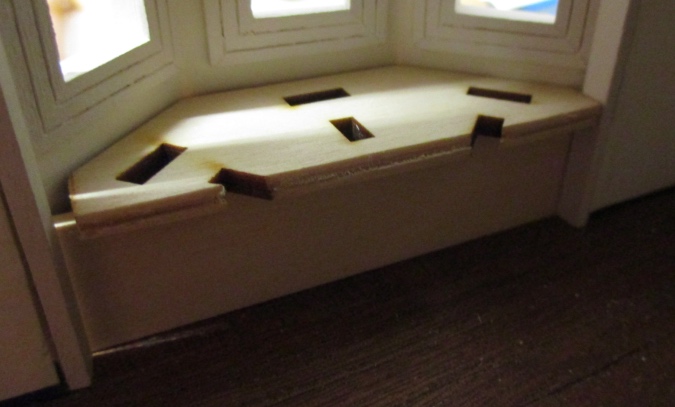 Luckily I still had the other side of the octagon piece. This time instead of cutting the corners, I sanded them with the disc sander, little by little, until the seat piece fit perfectly. The vertical piece is 3/4″ basswood, and there’s another piece at the back to hold the seat level. 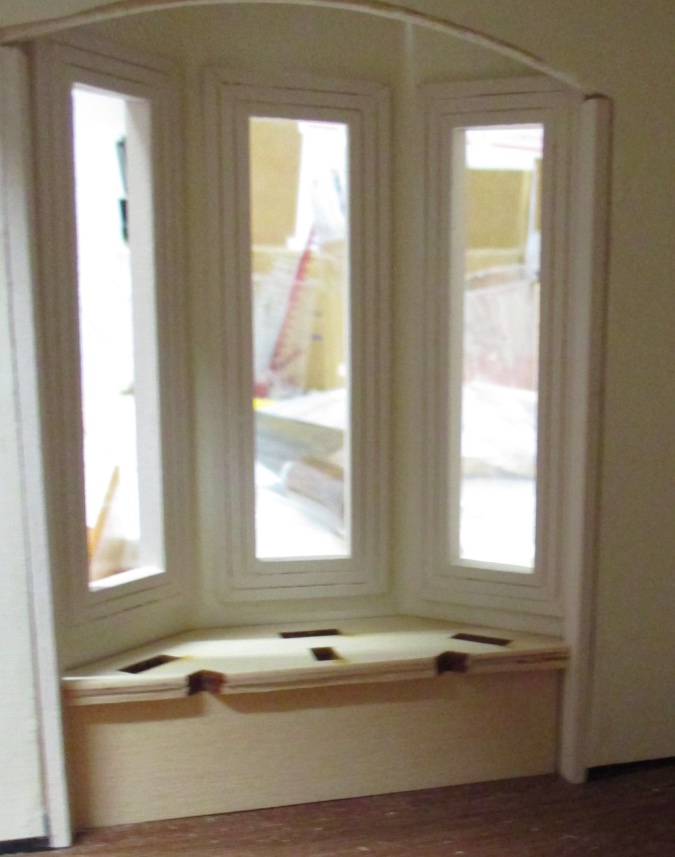 I looked through my scrap pile and found a piece of channel molding that fit over the front edge of the seat. 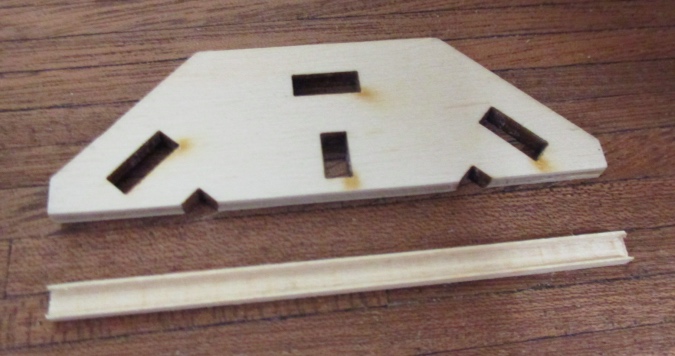 This covers up the slots and provides a cleaner edge than the exposed plywood.

I had a small piece of hardwood floor with very skinny planks left over from the Artist’s Cottage. I cut this to fit and glued it on.

Here’s how it will look. I also added a piece of cove molding to the front bottom of the unit. The whole seat will be painted trim color. 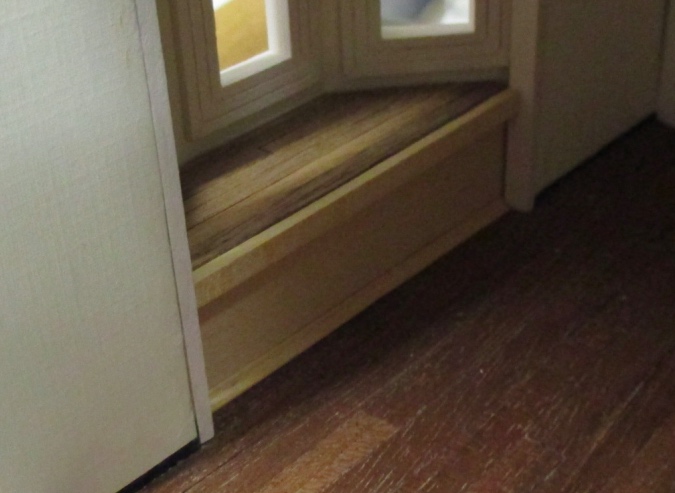 Back to the bay window trim. I had two options for the corners. This is the fancier style I used in the living room and dining room. I liked the idea of all three first floor bay windows matching, but this seemed a bit much for a kitchen. 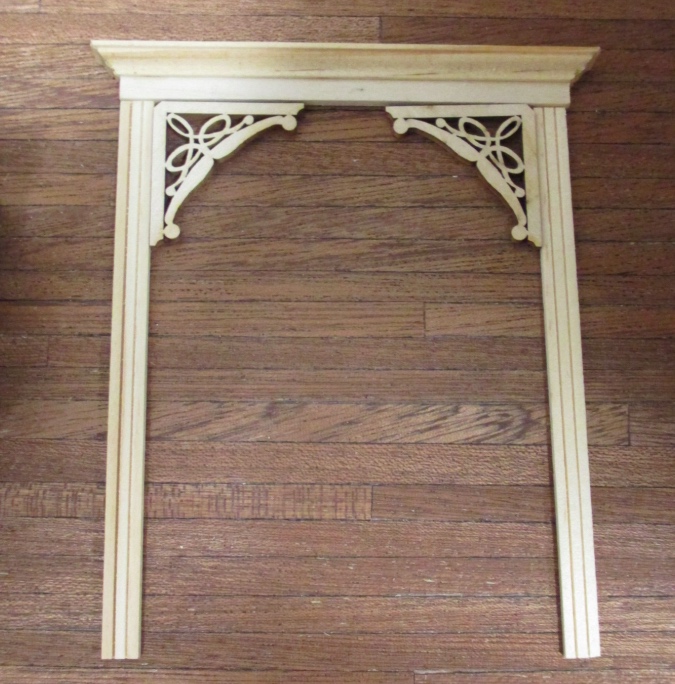 This simpler style is similar to what I used on the second floor, but a little larger. I decided to go with this one. 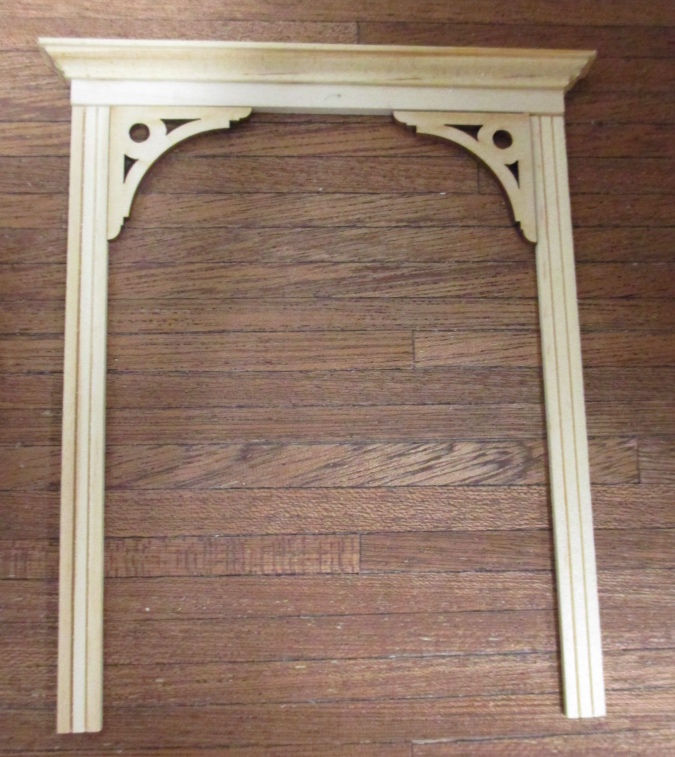 Here’s where I left off for today. I’m going to put a round table here, with the window seat providing seating on one side and two chairs on the other side. 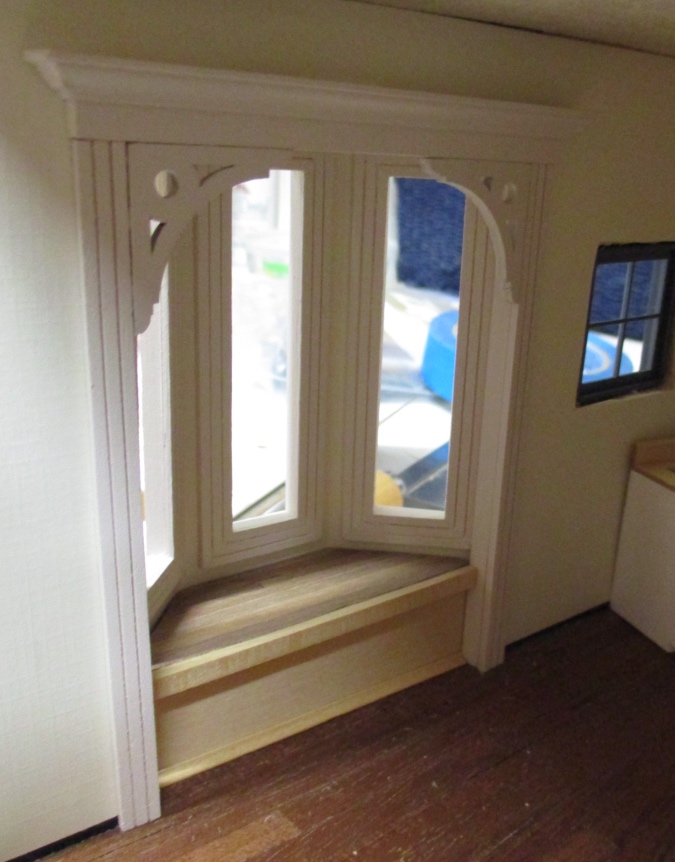