I started this blog post on March 16, 2013 — that’s when I started shingling the Queen Anne Rowhouse — and it’s been sitting as a draft for 2,004 days. But not anymore, because the roof is finished! 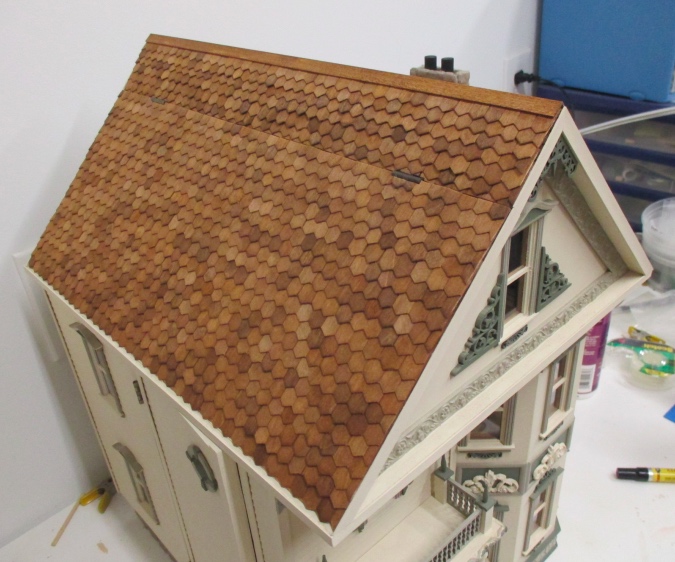 I used hexagonal shingles that came with the Greenleaf Fairfield. I really liked them on the Fairfield and someone from the Greenleaf forum sent me a bag that she hadn’t used. I started by dumping them into a foil roasting pan and dumping stain on them. Then I picked them out (wearing gloves!) and pressed them under paper towels to get the stain off. Because this takes some time, some shingles get more color than others, which makes for nice variety on the roof. The stain I used is ACE Early American. 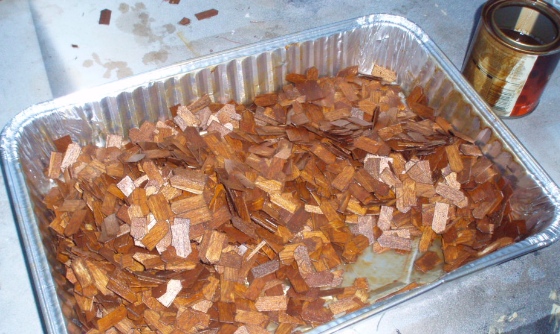 Behold the first row! I used to live in northern Marin county, where it gets hot. I would bring the house outside on a card table and shingle all afternoon. 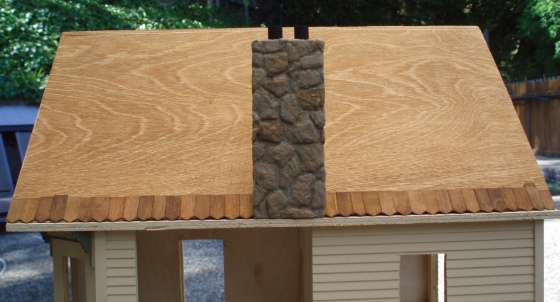 The rows are 5/16″ apart. When I try to draw all the lines at the beginning it turns into a horrible mess, so I shingle an entire row, and then draw the line for the next row. I had the foresight to write “lines 5/16″ apart” on the roof so I’d remember this five years later. 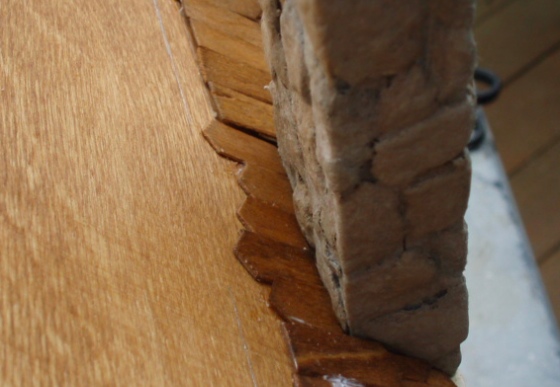 This is probably how much I got done in the first weekend. Each side of the roof is 15″ x 9″, with about 40 shingles per row. 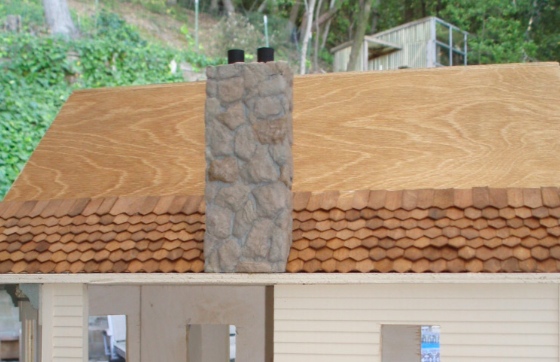 And here’s how far I’d gotten by the time I moved in October 2015. Not much progress for two years! 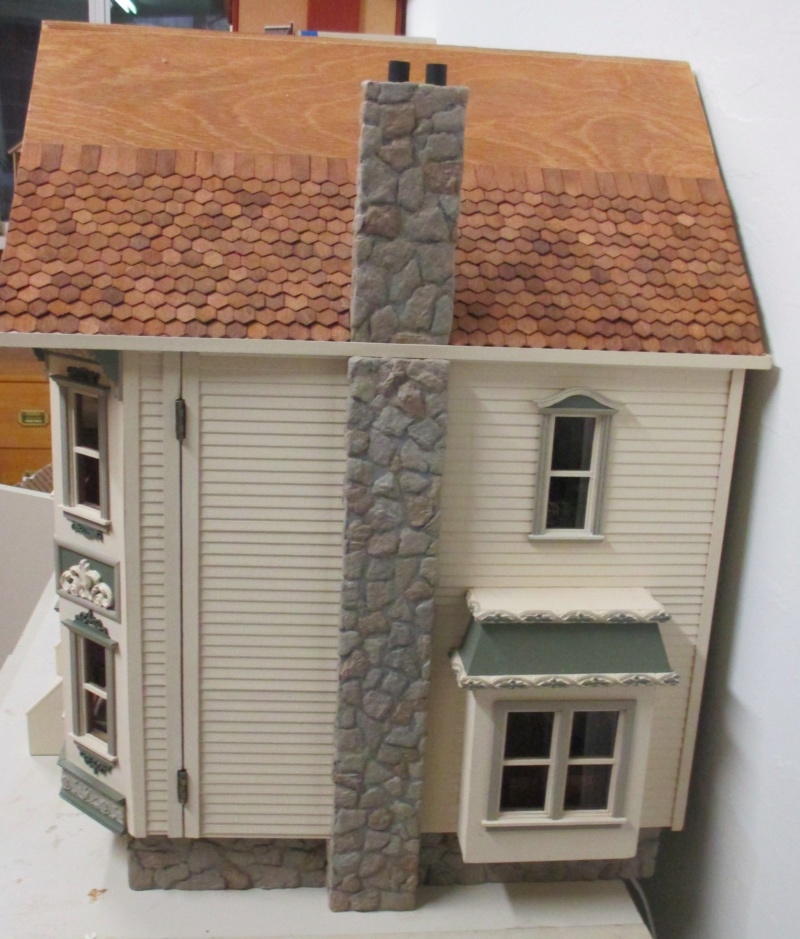 The house I moved to is in foggy San Francisco, and the backyard isn’t exactly scenic, so that marked the end of my “shingling in the yard” days. I didn’t start up again until this spring, when I brought the dollhouse upstairs from my workshop garage to shingle while watching TV. By the time I started fixing the stair rooms in June, the first side of the roof was almost done. 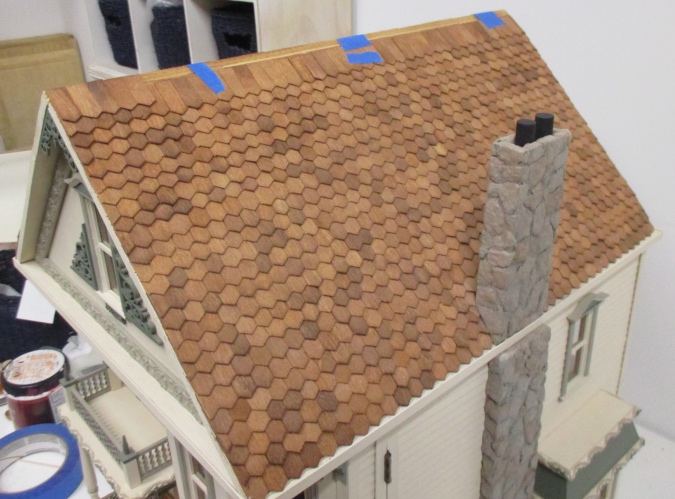 When I started the shingles, I was using The Ultimate white glue. I didn’t have any of that when I re-started, so I used Aleene’s fast grab tacky glue. Unfortunately it didn’t grab as fast as I’d hoped — I could only get through about a row and a half before the shingles started buckling so much I needed to tape them down and set the house aside for a day while the glue dried.

I don’t think the glue is solely to blame — I live in a more humid climate now, and these shingles are very thin, so they warped easily. When the glue dried they flattened out again, but they’re not as flat as I would like. Next time I shingle, I might go back to hot glue (which I was perfectly happy with until I hurt myself with the glue gun). 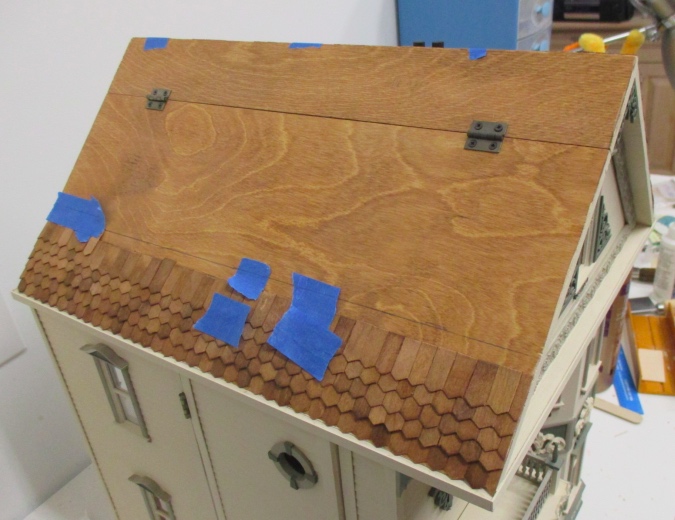 This is a nice, simple roof that didn’t involve cutting the shingles at angles (which is not my favorite thing). But it does have a hinged panel, which is not something I’ve dealt with before. I tried finding close-up pictures of how other people have shingled over the seam and couldn’t find any good ones, so here’s mine, I hope it will help some future shingler!

I cut the shingles so a small piece is on the bottom edge of the seam, and a larger piece on the top edge. I shingled both of these rows at the same time to ensure the top and bottom pieces of each shingle matched.

I shingled over the flat part of the hinge, so only the rounded part is visible.

(I’m not sure if I’ve explained this well — it’s one of those things you’d see if you were looking at in person but is hard to articulate. And I call myself a writer!)

Before applying the shingles, the roof opened flat. With the shingles on, they bump each other and prevent the roof from opening flat, but it still opens enough to provide good access. 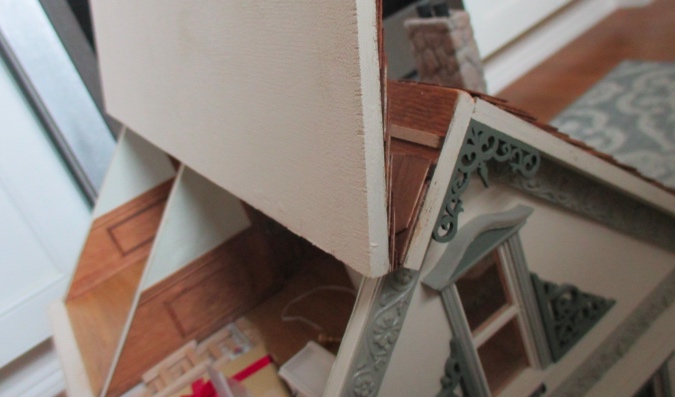 With both sides finished, I rested the corner trim on top to see how it looked. The top row of shingles is too long. I counted out my remaining shingles and had just enough to add one more row on each side (you’ll see it in a later picture). 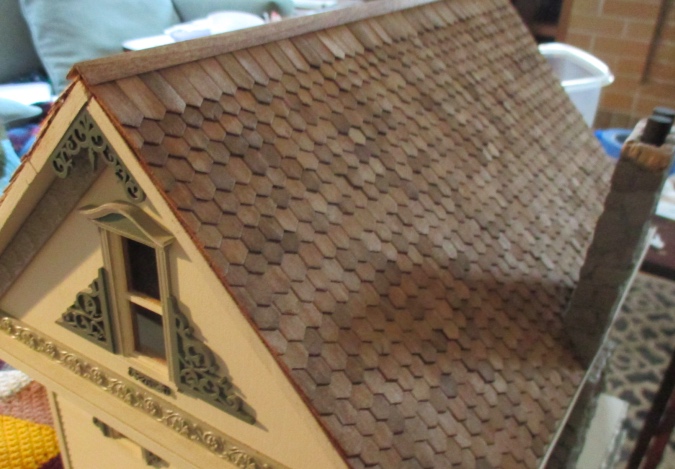 With the shingles finished, here’s how the front of the house looks. The roof edges are kind of janky and need to be covered with trim. 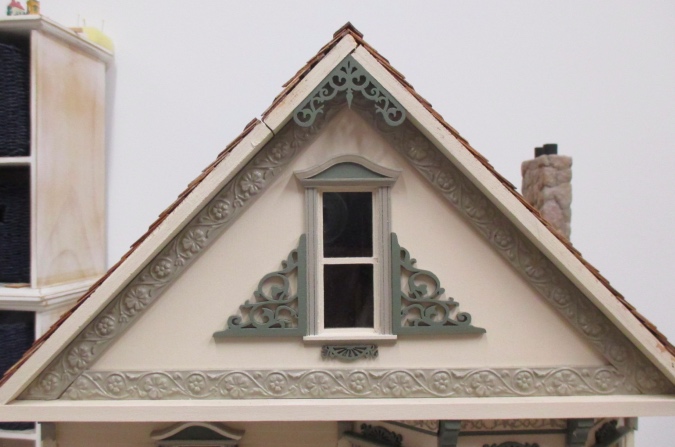 The Rowhouse is made from 1/4″ plywood, and I had already prepared 1/4″ basswood pieces to go on the roof edges (that’s the same size I used to cover the rest of the edges). But the strip wood I’d added above the seam caused these gaps, which I didn’t want to be visible. So I prepared new trim pieces from 5/16″ strip wood instead. 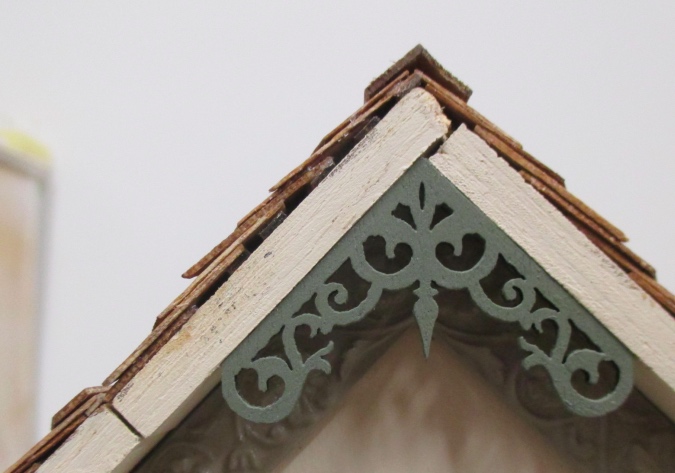 Here it is with the trim attached. 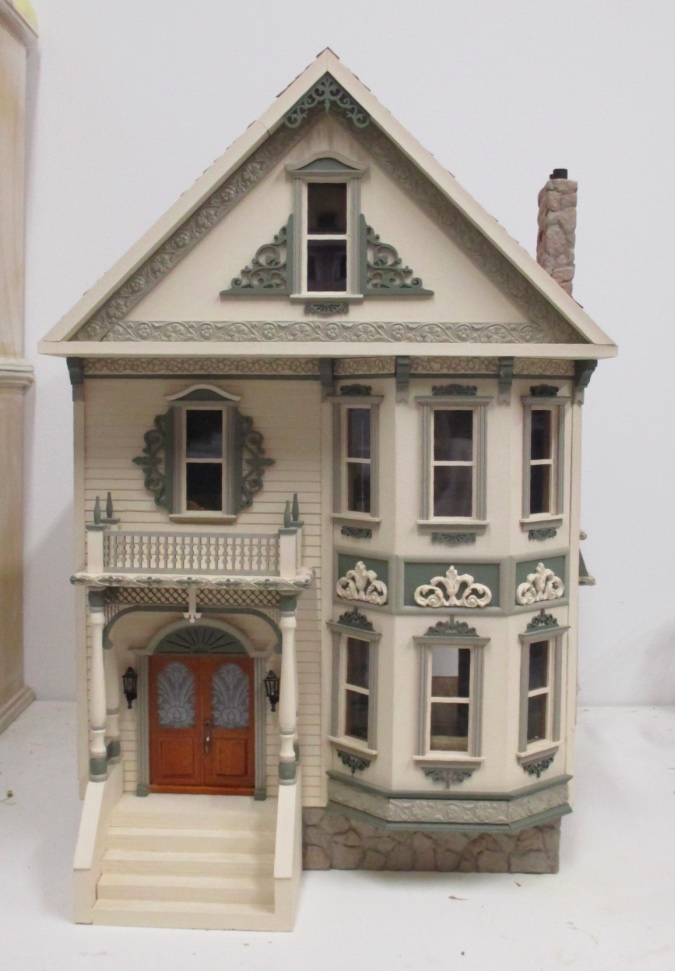 And the back side. 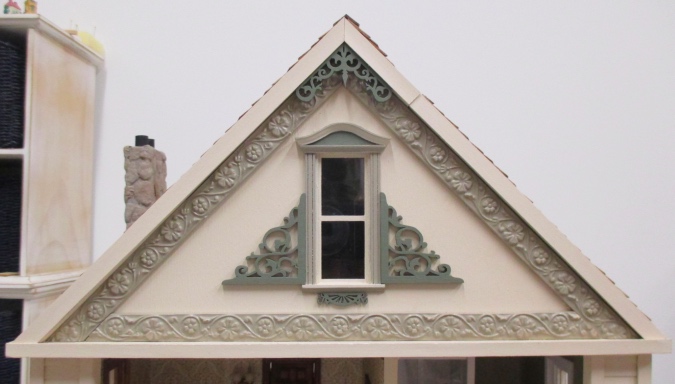 Here you can see the final row of shingles under the corner trim at the peak. I cut these down to maintain the proper spacing. 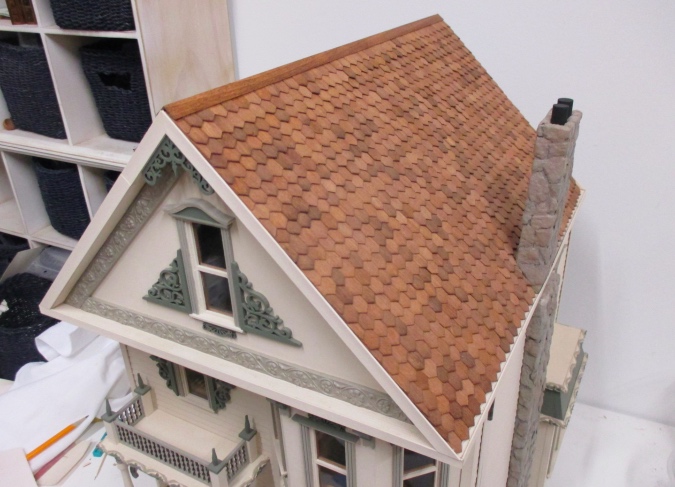 And here’s the hinged side. The seam is more obvious from some angles than others. The next time I do a hinged roof, I’ll probably use rectangular shingles instead — then each row of shingles will end with a straight line, and the seam will be even less obvious because it will look like any other row. That’s not something I considered when I decided to use the hex shingles. 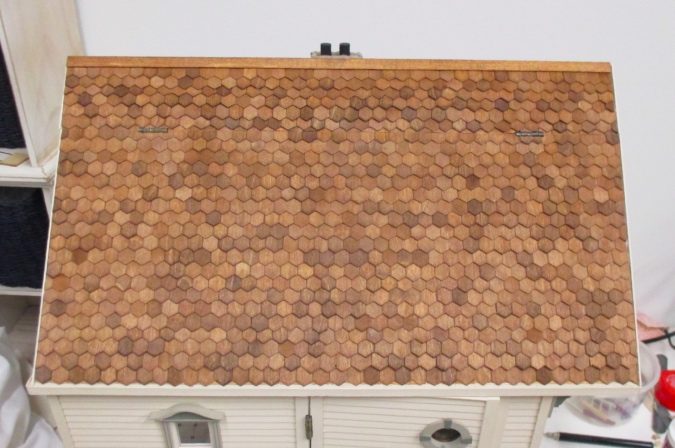