I haven’t been able to work on Sam & Max’s office (or anything) for most of July because Geoff was putting finishing touches on my new workshop, which is now 99% finished! 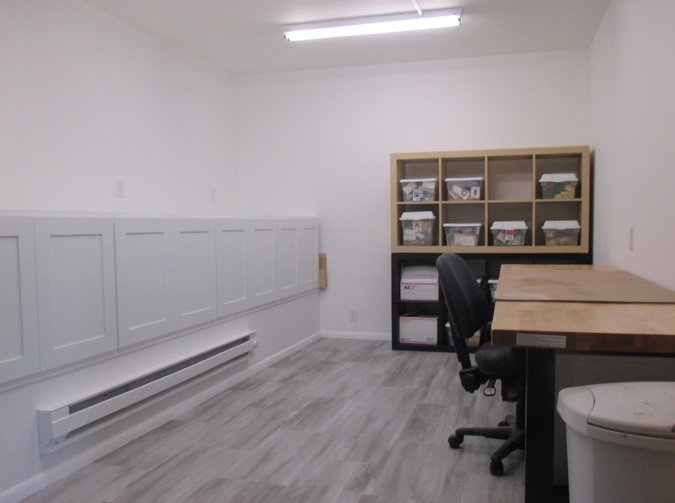 It’s a little bigger than my old workshop, with a level floor and real walls and a heater and a longer desk and the built-in cabinets I wanted all along. It even has a pocket door! 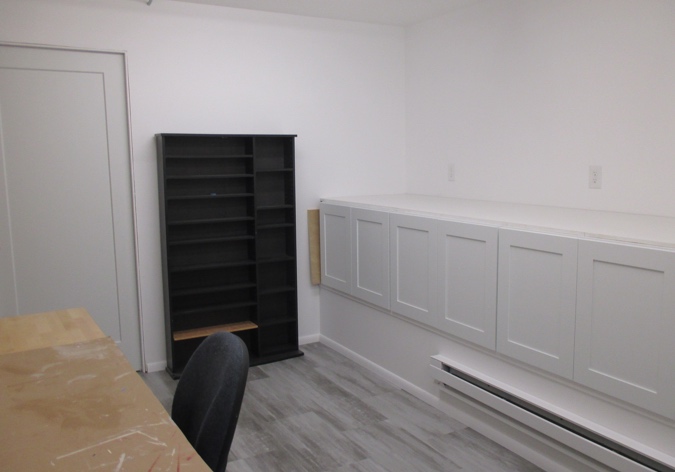 I’m still moving everything back in, I’ll post some more pictures when it’s all set up. I guarantee it won’t be neat and clean for long. 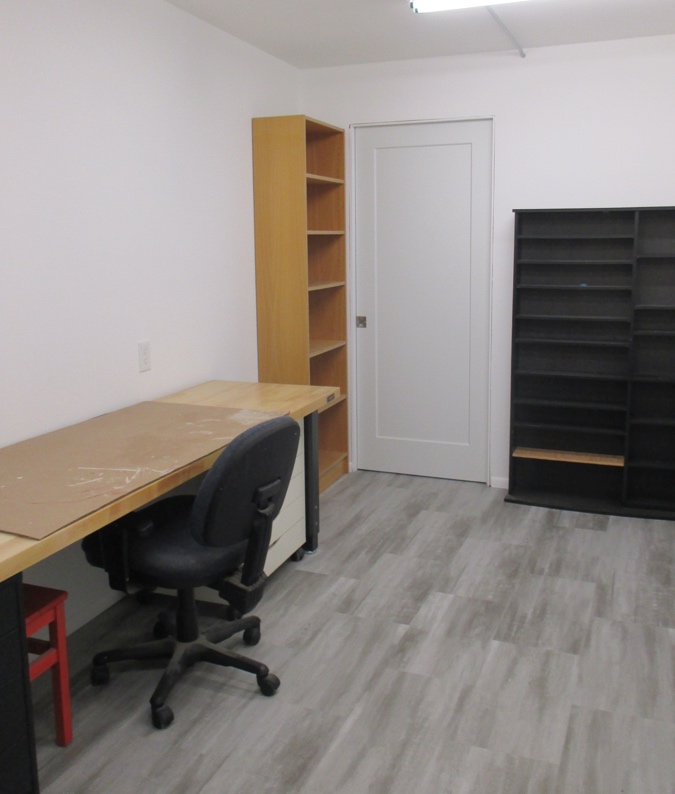 Back to the roombox! Last time I finished the stucco walls. 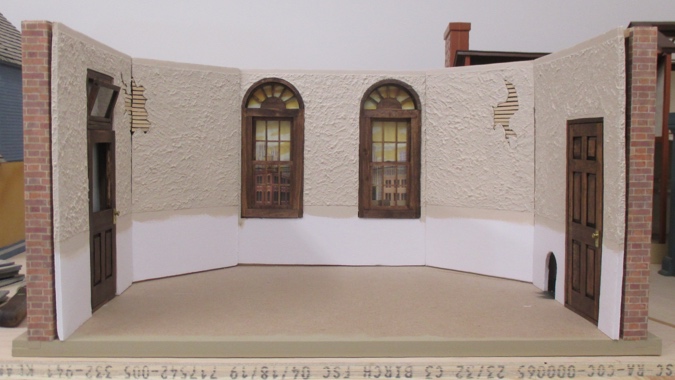 My initial idea was to use 3″ tall basswood with 2″ squares cut from 2″ tall basswood to simulate the raised panels in the Telltale version (but without bevels). 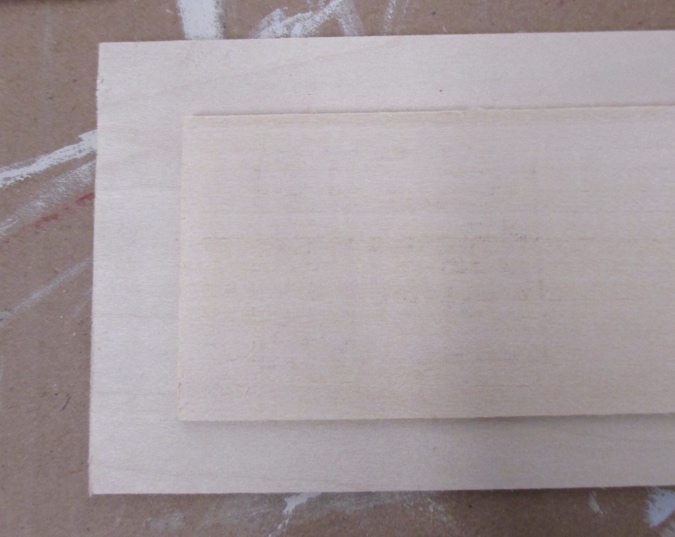 This would have proven challenging around the rat hole, where I would have had to cut the hole into the panel. So I decided to do a simpler style, more like LucasArts’ 3D version, by laying thin 1/4″ strips on top of the 3″ basswood. This gives me more flexibility in the width of the panels and won’t interfere with the rat hole. 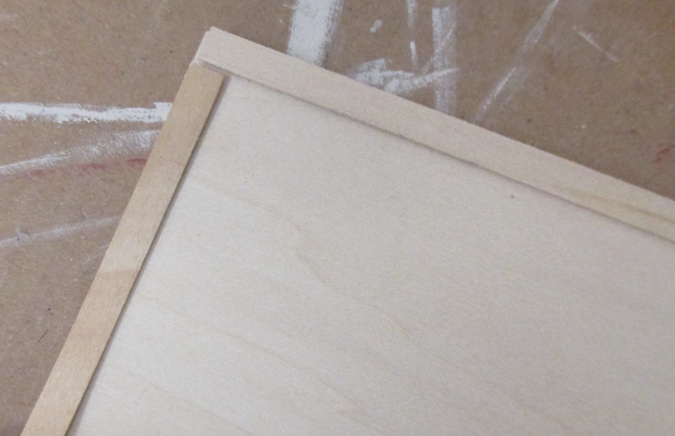 I drew on the bottoms of the walls to figure out the spacing for the wainscot. I really thought I snapped a picture of this at the time (a month ago) but apparently not, so apologies for the lack of a visual. But here you can see how it looks near the door. 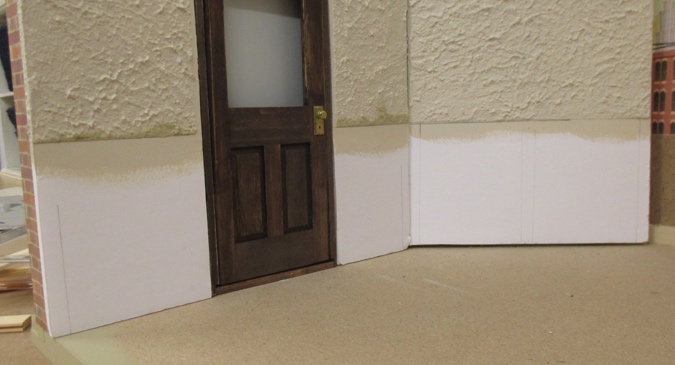 The panels on the diagonal wall will be 2.5″ wide, because that’s what fit on those walls. Under the window they’re 2.75″ wide to play nicely with the layout of the windows. 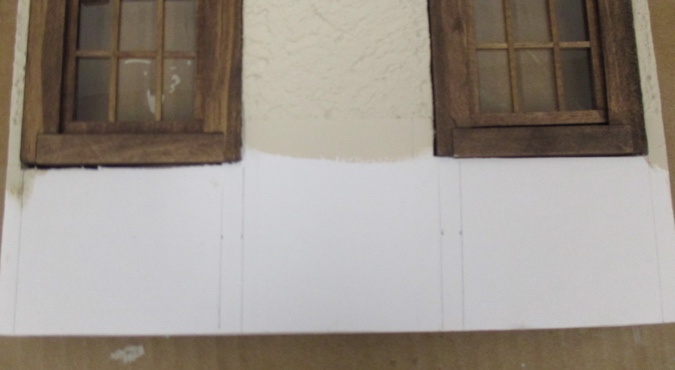 Here’s what I ended up with for the rat hole. It’s not elegant. I should I have planned this out *before* I cut that hole… 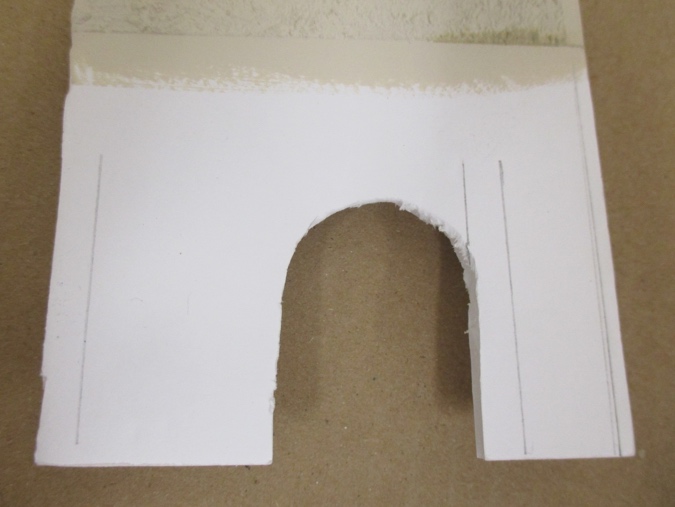 I decided to move the rat hole over so it could be nicely centered in a panel rather than haphazard. This panel is now 2.5″ wide to match the ones on the other walls. 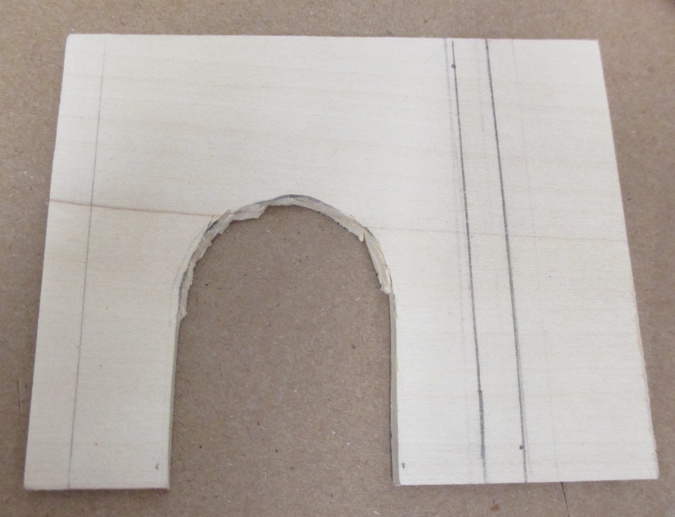 After cutting out the hole with a utility knife, I smoothed out the arch using a curved metal file. 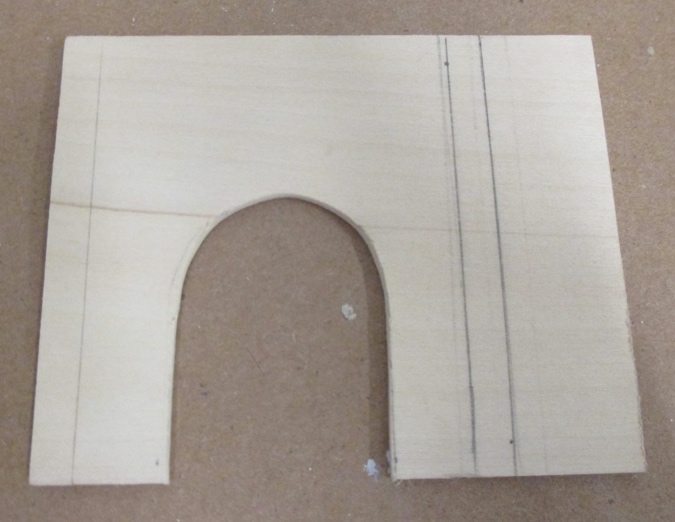 Then I lay the wainscot piece over the foam core, traced the new hole, and cut it with a utility knife. 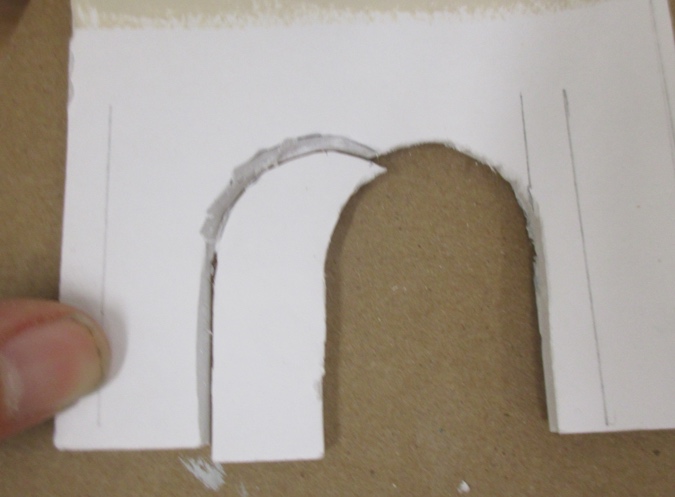 I flipped that piece over and glued it in to the other side of the hole. 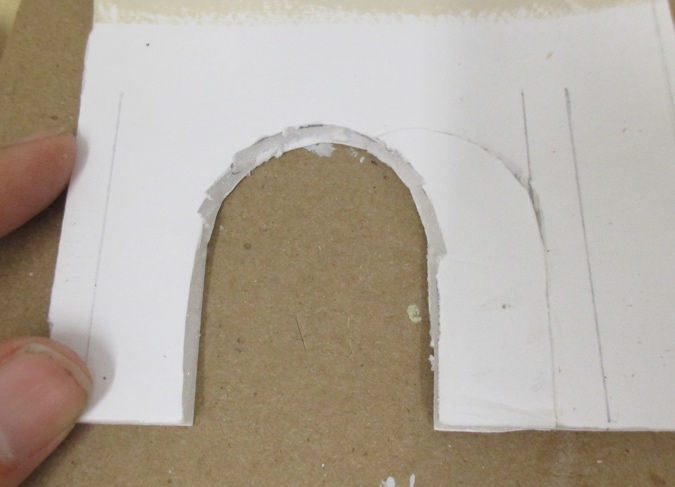 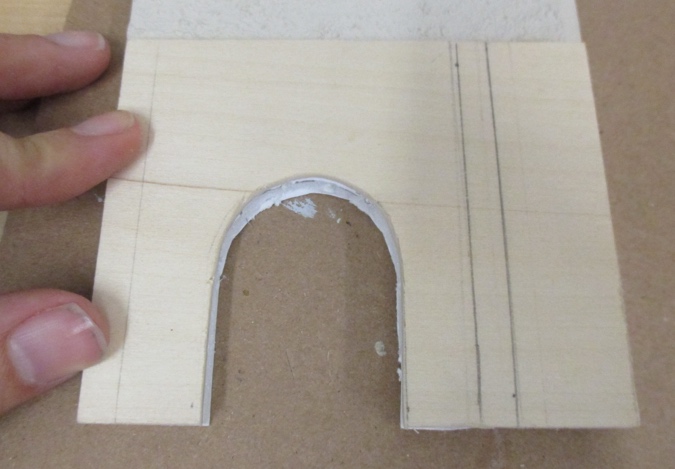 The last step was to move the wooden supports around the hole. I lay the wall on the floor and made a mark on the wood to know where to cut it. 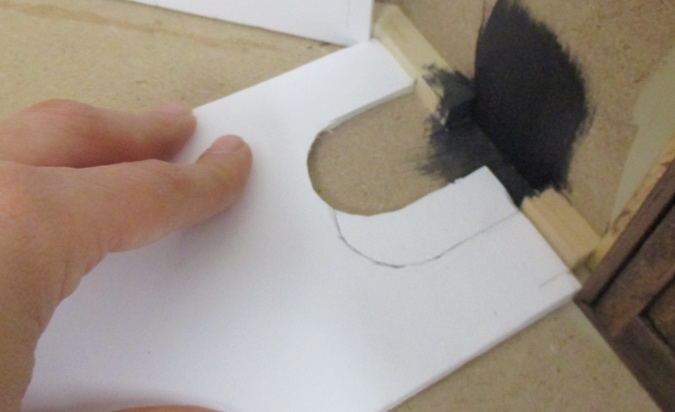 Then I used a razor blade to pry up the wood piece. 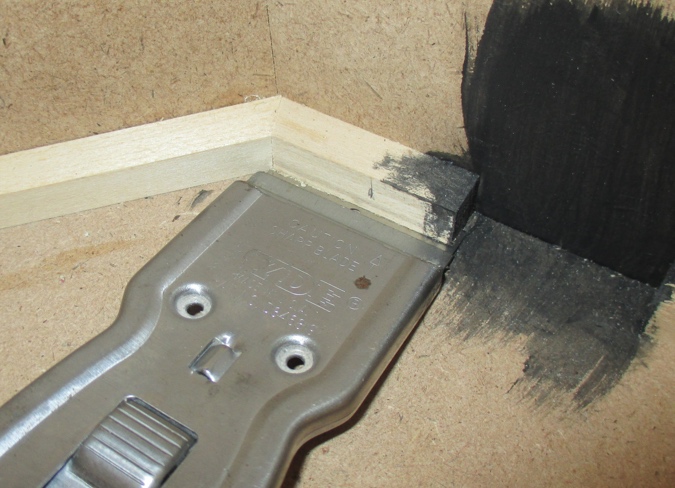 Here it is after cutting it down and gluing the small piece to the other side. 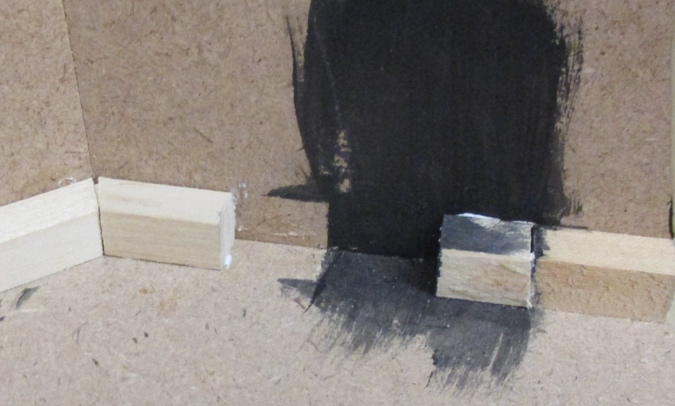 Voila! I just need to paint the new hole area black, and you’ll never know it was a patch job. 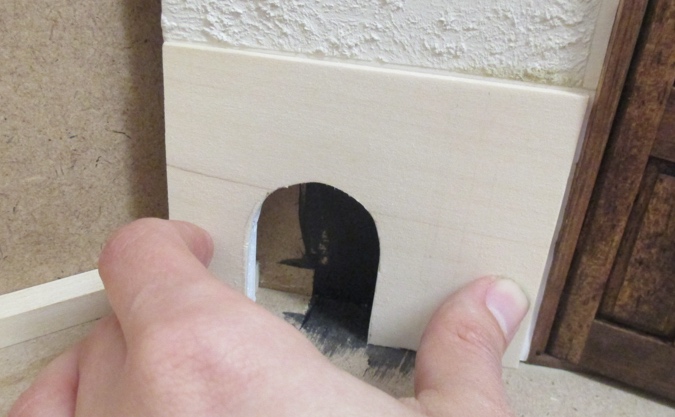 I’m going to wait until the walls are in to attach most of the wainscot, but I wanted to do the center wall while the wall was still out to make the window area easier to deal with. First I cut out the spaces where the bottoms of the windows go.

I wasn’t super careful about this and it came out wavy. That’s okay, I’ll cover it with trim.

Next I stained the wood on a nice sunny day. 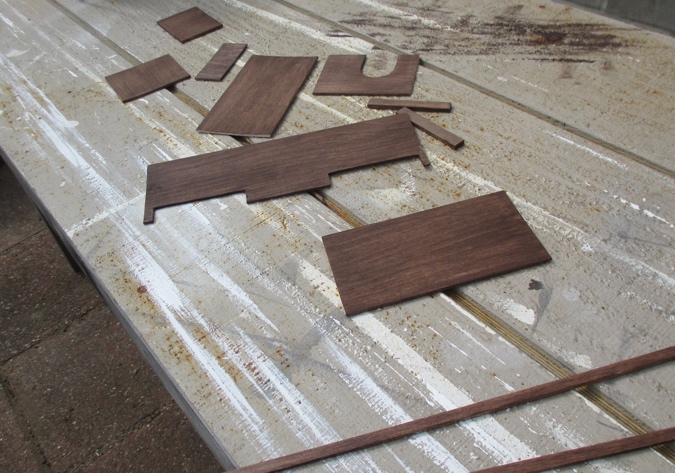 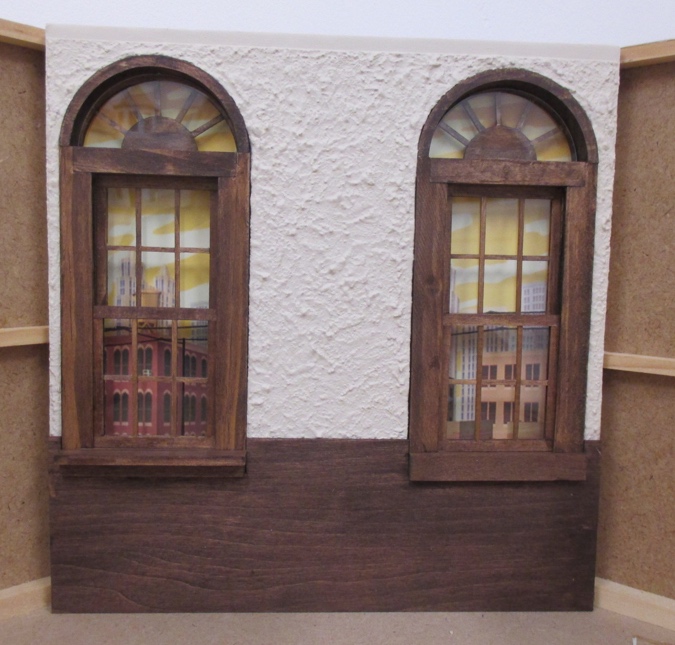 The one on the left looks more realistic (here’s a close-up) but I preferred the one on the right. The dark window trim is already pretty overwhelming and there isn’t enough contrast to really see that the more realistic sill is sticking out. So I decided to go with the simpler version.

Next I added the strip wood to create the panels.

The layout is little funky… I would have liked to position all of the vertical pieces outside of the window trim, rather than outside on one side and lined up underneath the trim on the other, but that would have left an obviously skinny panel in the middle and I thought it would be better to keep them consistent. The desk will be in front of this wall, anyway. 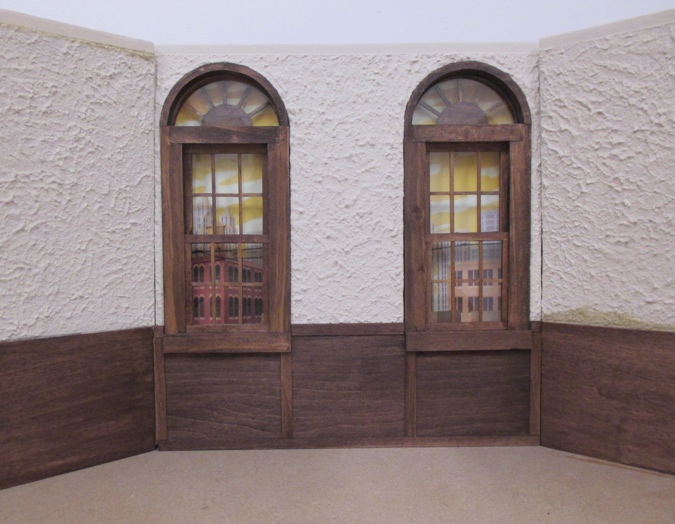 I’ll wait to finish the rest of the wainscot until the walls are glued in. This way I can glue the strip wood right up against the edge so the corners are neat and gap-free. 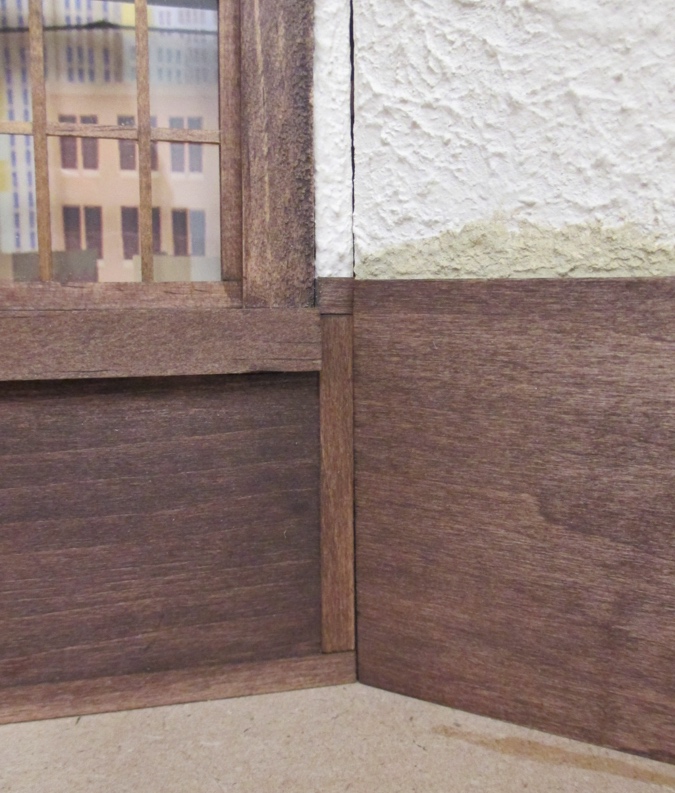