For the hardwood floor in Sam & Max’s office, I used the same micro veneer that I have used in the past in the Victorianna and Thatched Cottage. I buy this stuff in batches off eBay. It’s basically the same as the dollhouse hardwood flooring made by Houseworks, but a lot cheaper.

I used a light color (I think maple?) that’s no longer included in the bundles. (It has been replaced with oak.) I used the paper cutter to cut the veneer sheets into 3/8″ wide strips. 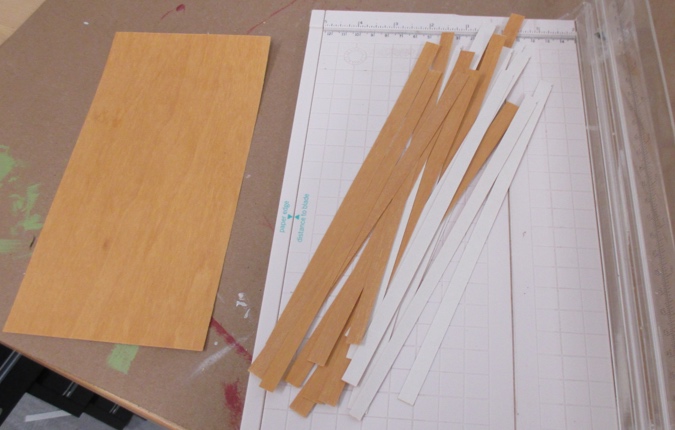 The veneer is paper-thin, and it has a sticky backing that makes it easy to apply to the floor. 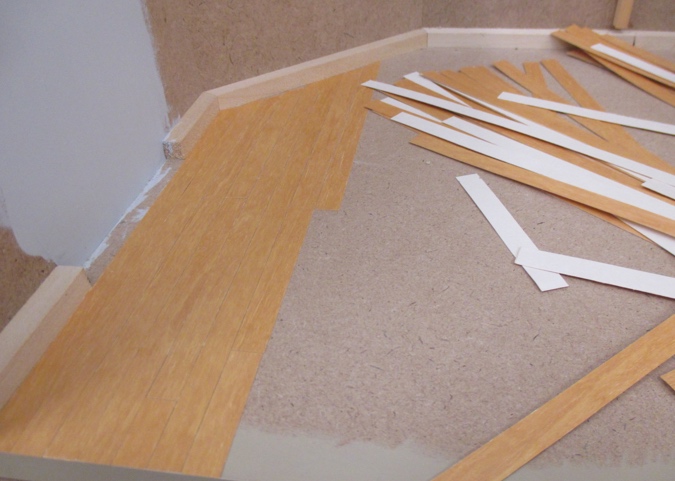 The other times I’ve used this for flooring, I used darker colors and went around the edges in black Sharpie to make the individual floorboards stand out. I didn’t like how that looked with this lighter color of wood, so instead I left very thin lines between each floorboard so the brownish MDF shows through. 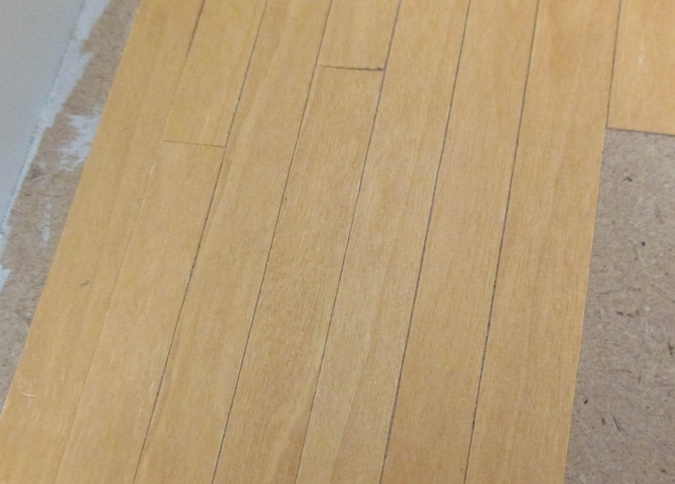 I carefully lined up the boards at the front edge of the roombox. I didn’t really like how it looked — since you can see the edge, it’s very obvious that this is thin, paper-like stuff and not real floorboards. 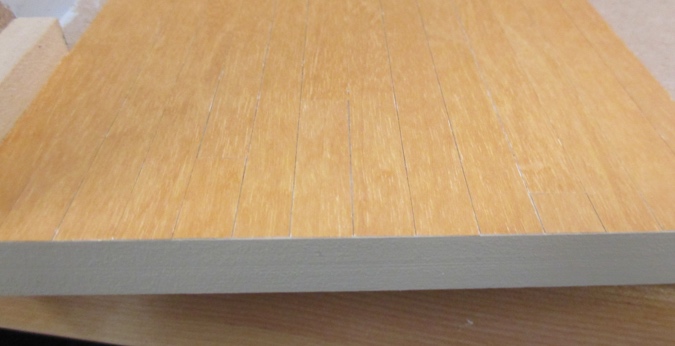 I tried wrapping a couple over the edge and decided I liked the look of that better. 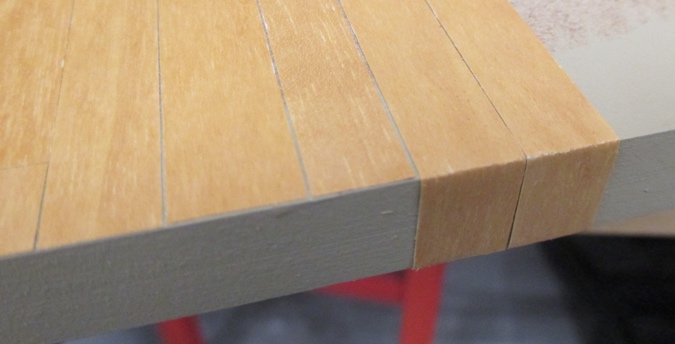 So I ripped out the edge pieces I’d done so far to re-do them wrapped around the front. 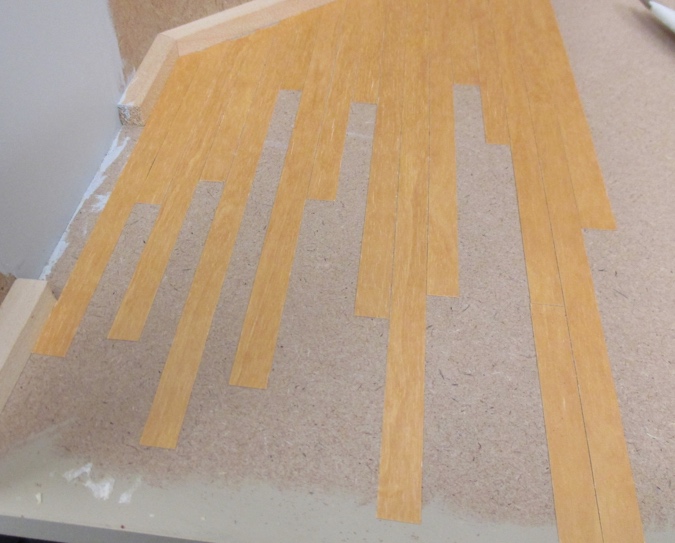 As soon as I finished doing this, I realized it was a bad move. The folded-over veneer doesn’t stick tightly on the front edge — when I run my finger over it I can hear it crinkling as it sticks and unsticks itself. And some of the boards got sort of chewed up at the folds, with the wood splintering and peeling up from the paper backing. I expect that the folded-over pieces on the bottom will get damaged and may come unstuck over time as the roombox gets moved around. 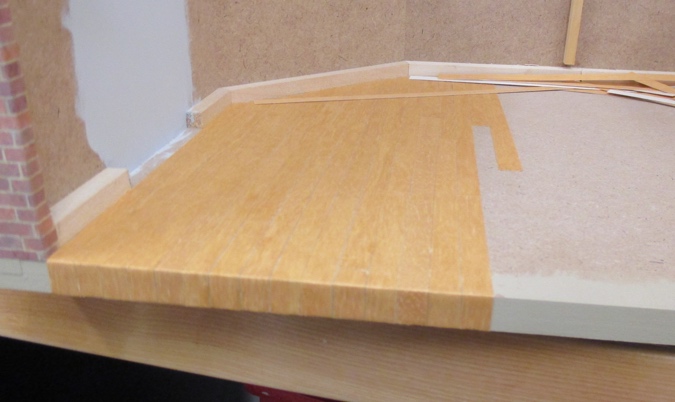 But I was concerned about running out of this color, especially since it’s no longer available from the eBay seller, so I pressed on. 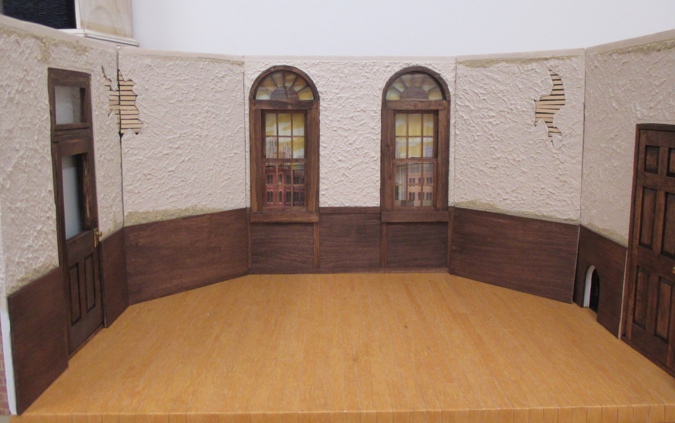 I don’t have the right size of wood right now, but I’m going to add a trim piece to the front edge to cover up the folded up pieces. This will look neater with the veneer folded over the front than it would have if I had continued applying the veneer the other way, so I don’t regret the detour.

So it was done, and it looked fine. The light floors have a nice contrast with the wainscot and the desk. 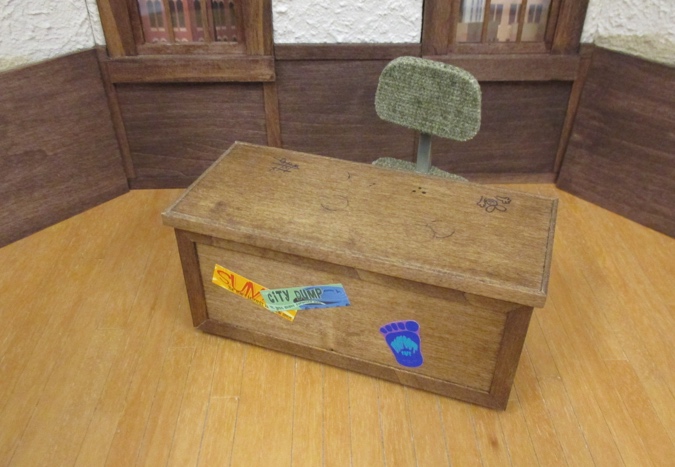 But… I started picking at it. As I have a tendency to do. I used a Golden Oak stain pen to cover up a few spots where flecks of veneer had come off the backing, leaving the white paper showing through. And I noticed that I could use the stain pen to color the MDF between the boards. But then I sat back and realized it left a very obvious stripe, since the flooring isn’t the same color as Golden Oak. 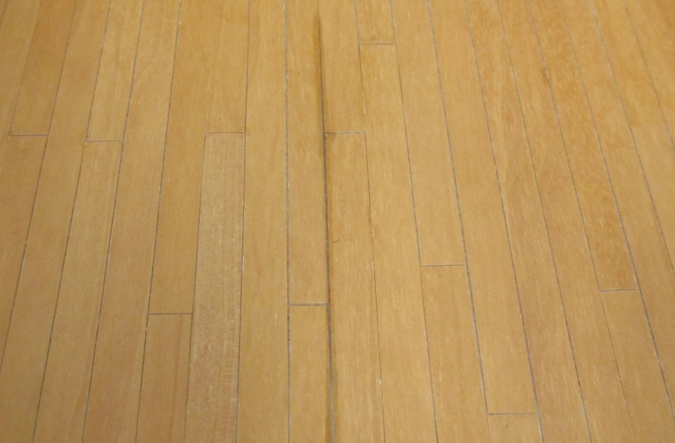 So I pulled out a tub of Golden Oak stain. What could go wrong? 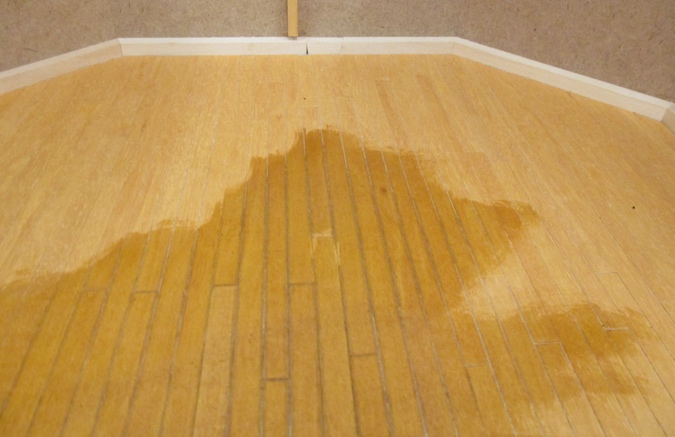 (This. This could go wrong.)

So. It’s much more golden than it was before. But two things were bugging me. One, the darker lines around the boards (stain on MDF) looked sloppy. And two, there were a couple of glue spots where I’d glued down veneer that didn’t want to stick, that now wouldn’t take stain. (I wouldn’t have used glue if I’d known I would be staining!) 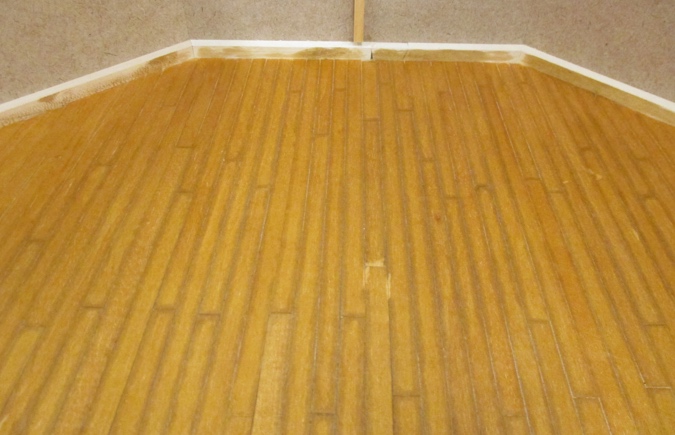 I got out some rough sandpaper and attempted to sand away the glue marks, then stained those spots again. But the stain didn’t want to soak in. Especially on the one on the right, I think I sanded away most of the veneer so there was only paper left. I should have used finer sandpaper… 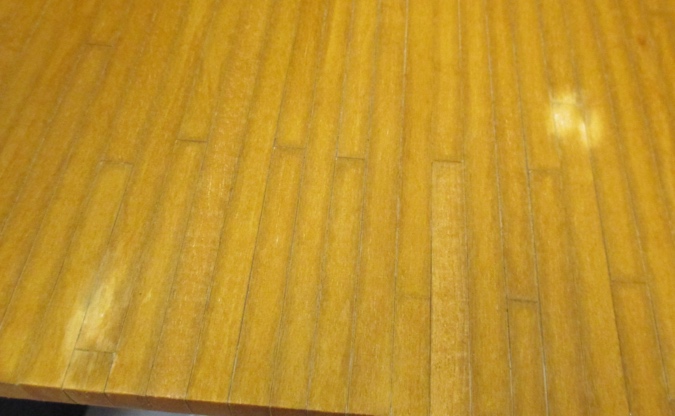 I was deep into the rabbit hole now, so why not just pull out some more stain and try again? I got out the Aged Oak gel stain that I used for Sam’s desk. Gel stain is thicker than regular stain and has the potential to cover stubborn spots better. I’ve read that you can even use gel stain over polyurethane.

It didn’t soak into my sanded spot. But it did give the wood an interesting look. 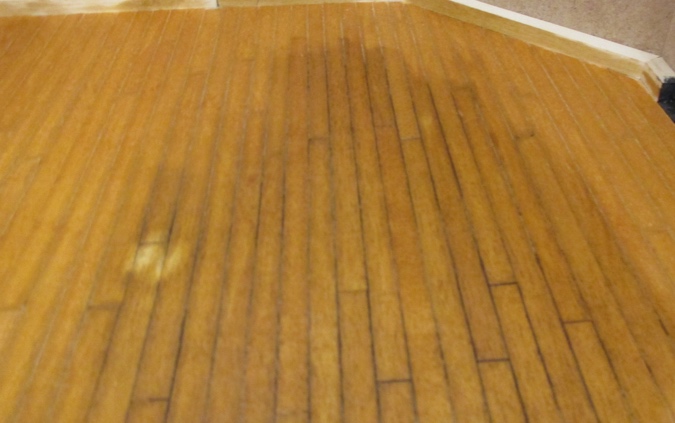 I really like how it brings out the grain. And the seams between the boards look more natural now. 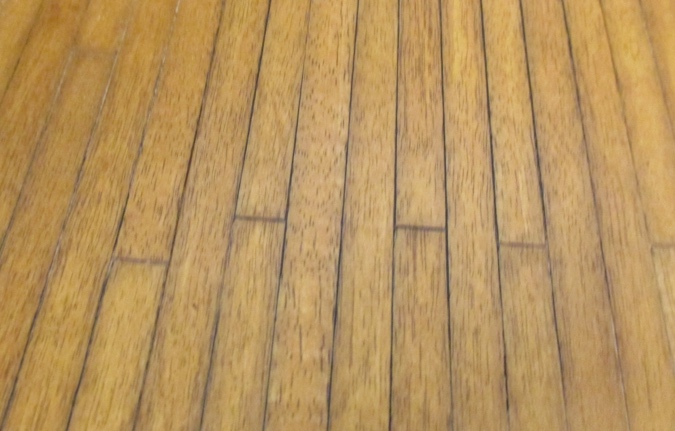 So here’s the whole floor after a coat of Golden Oak (which I didn’t let dry) followed by Aged Oak gel stain. The sanded blotch on the left looks okay. The one on the right still looks like a sanded blotch even after several attempts at covering it up with the Aged Oak, which might have made it worse by darkening the area around it and calling attention to it. 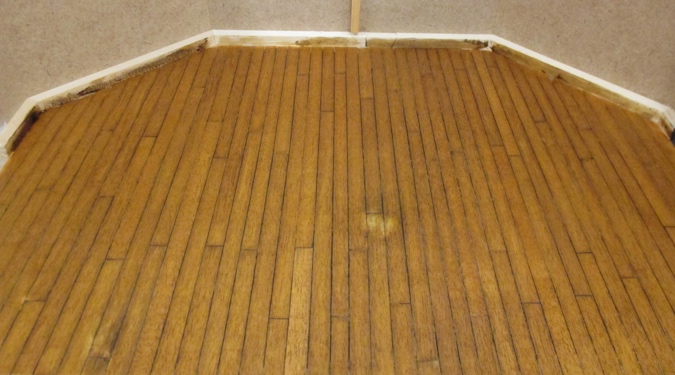 Unfortunately it’s too far forward in the room to be covered up by the desk. But maybe I can put the rug over it. 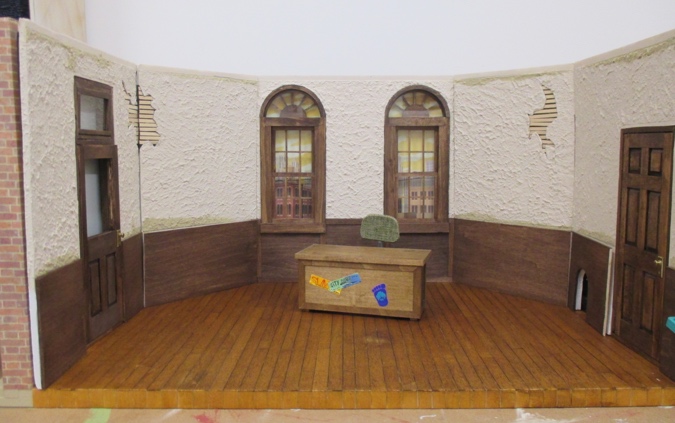 I left it to dry overnight. By this morning I had decided it would bother me too much (even covered by a rug) and I should fix it. I peeled up the offending strip and replaced it. 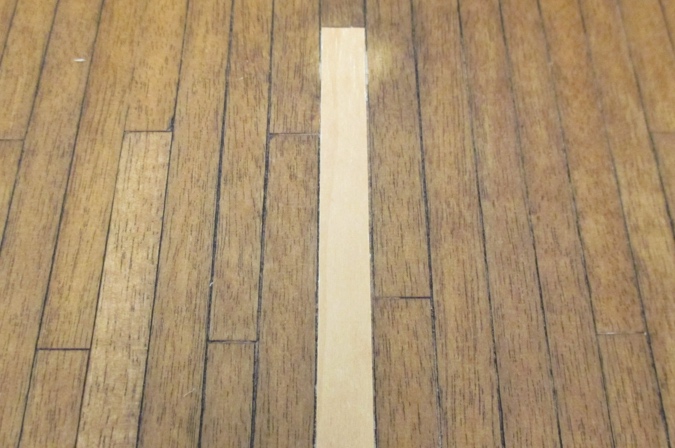 Then I did the Golden Oak followed by the Aged Oak again. 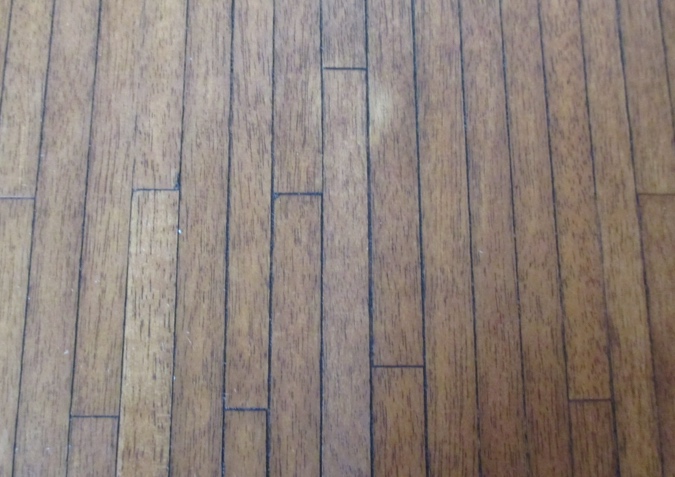 There’s still a little bit of light splotch on the piece to the right of the one I replaced. It’s on a long piece of wood that doesn’t wrap around the front of the roombox, so it would be harder to peel up without damaging pieces around it. 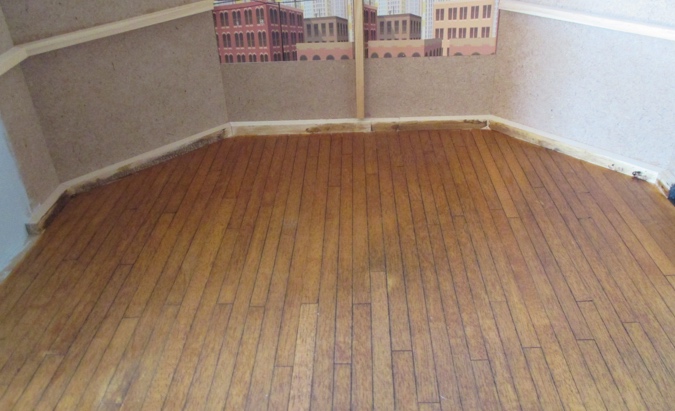 I’m going to leave it for now in case I’m being overly picky, but if it’s still glaring at me when I’m ready to glue in the walls, I’ll redo that board first. 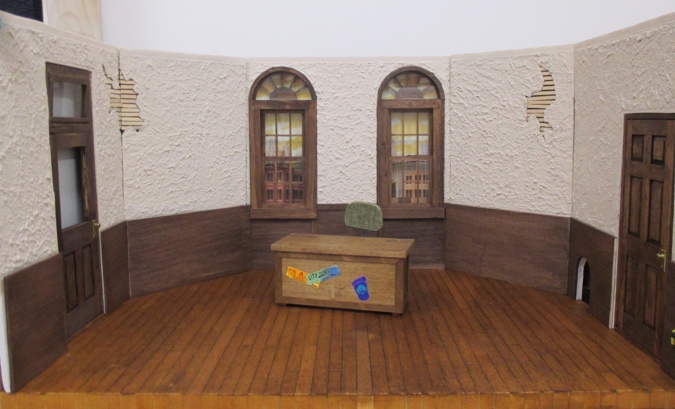 Looking at this last picture compared to the one above of the finished floor before I added stain, I’m really not sure if it was the right move. The original color had better contrast with the other shades of wood. But this does have more of a grungy / worn look to it, which is appropriate for Sam & Max’s office, and I like the visible grain. Opinions?