In the early episodes of Telltale’s Sam & Max games, the Freelance Police have a braided rug in their office. (After Max becomes President of the United States, it’s replaced by a rug out of the Oval Office.)

As seen in this bird’s eye view screenshot, the rug has green, brown, and off-white rings. Also note the astroturf welcome mat outside the rat hole — we’ll come back to that farther down in the post. 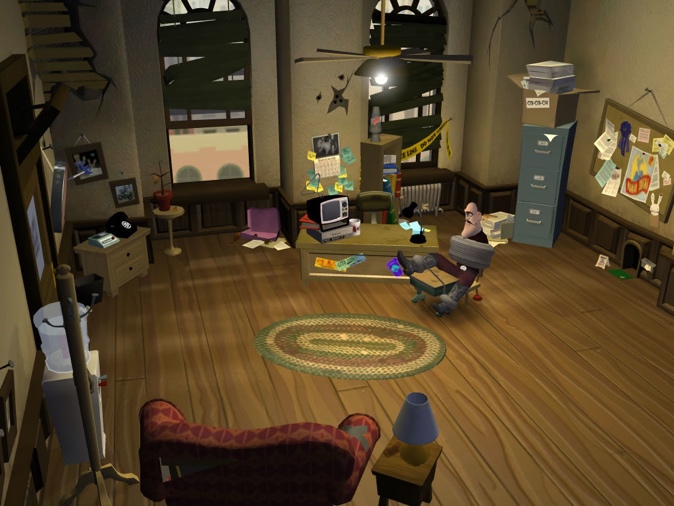 Each ring is fairly solid — the off-white has flecks of green, but the green and brown are just green and brown. I could have duplicated the rug exactly, but I thought variegated thread would give it a more authentic “rag rug” look. (Also, I have a bunch of variegated thread that came in a variety pack and nothing else to use it for!) I used two skeins of DMC 94 (green) and one of DMC 105 (brown). 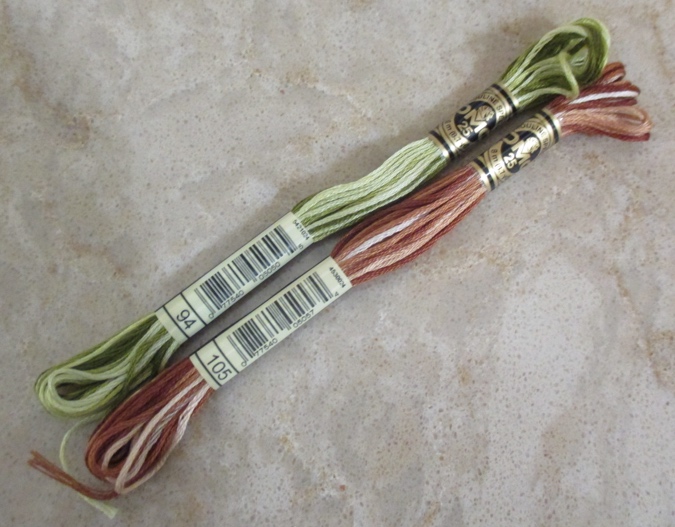 I followed this nice tutorial from Natalia’s Fine Needlework. The first step was to braid the floss. This is time-consuming — it took me about an hour per skein. The braid then gets coiled into its rug shape on top of a piece of glass covered with double stick tape.

This was my first attempt. I didn’t plan it out, so I ended up with a thicker brown ring on the inside and a thinner one on the outside. 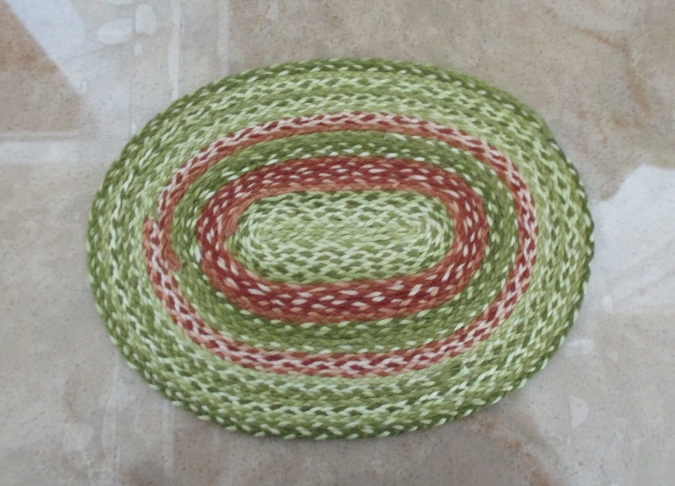 I followed the directions to iron fusible interfacing to the back of the rug. I’ve used this stuff before and haven’t had problems with it fusing, but this time it really didn’t want to stick. After several rounds with the iron, the edges of the interfacing started fusing with the glass, so I figured I’d done enough. 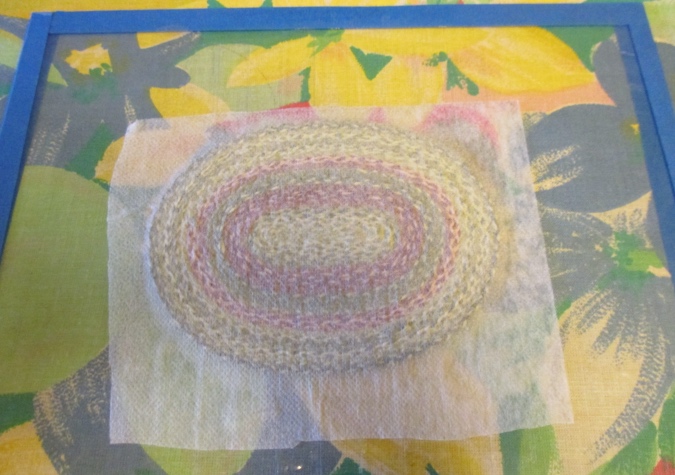 Apparently not! When I tried to peel it up from the tape, this happened. 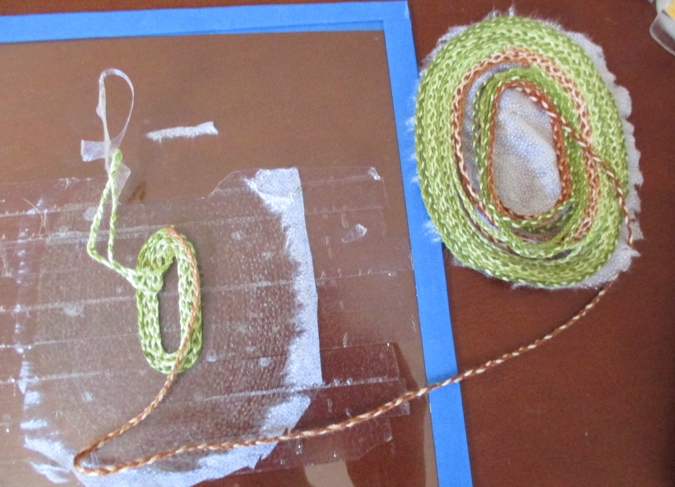 In the tutorial, the interfacing doesn’t get stuck to the glass. Mine did, which caused it to rip around the edges of the rug when I tried to peel it up. And most of the braid didn’t stick, it fell right off. To be fair, I did use steam, even though the tutorial said not to, because the directions on the interfacing said to. I thought the steam would be what caused it to fuse.

Luckily the braid was still intact. I removed the interfacing and tape from the glass and started over. This time I left tails of tape on the sides so it would be easier to peel off later. 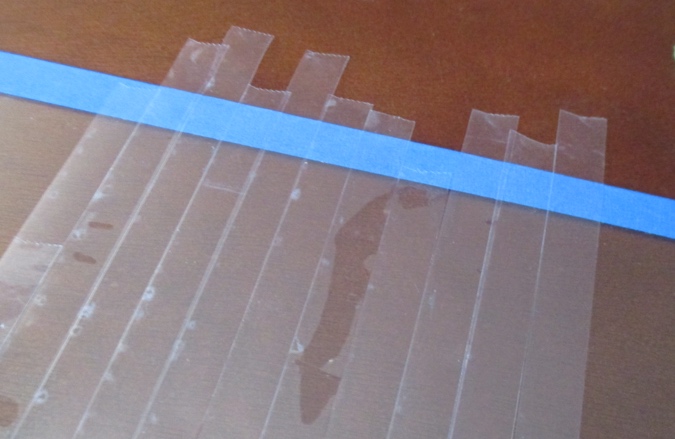 I was more deliberate with the size of the rings this time, making sure to always start the new color in the same spot on the rug so the ring would be a consistent width all the way around. 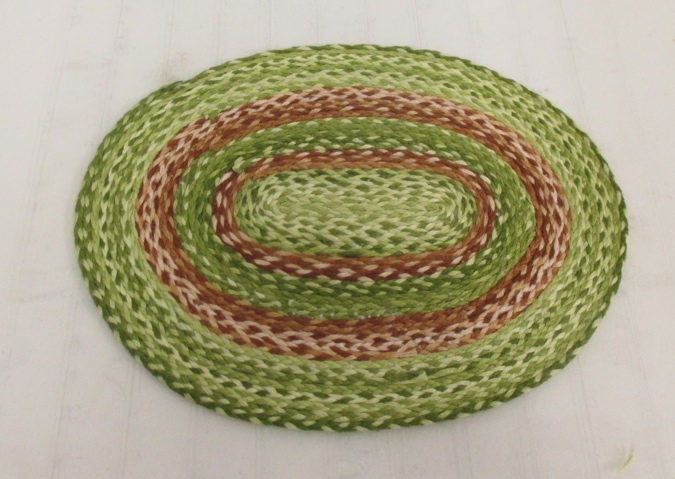 To finish the rug, I used a piece of thin cardboard to spread tacky glue all over the back. 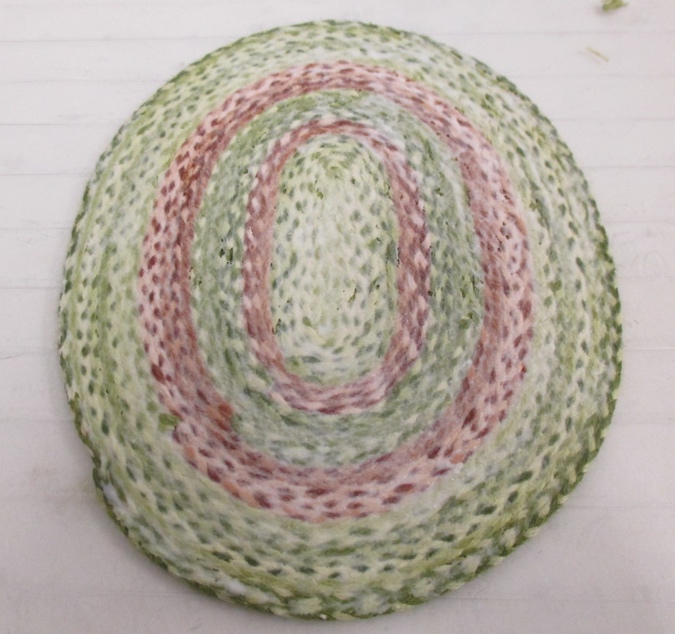 Then I glued on a piece of lightweight fabric. 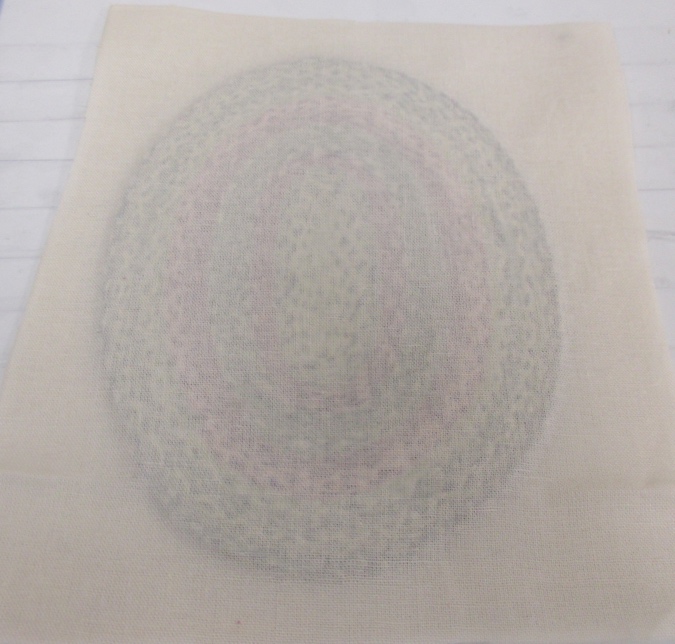 A few minutes later, I gently peeled the rug off the tape. Luckily it came up in one piece this time, because that braid wouldn’t be salvageable now that it had glue all over it.

(Note: Don’t let it dry too long! I made another rug after this one and left it to dry for about thirty minutes. When I pulled it up, some glue that squeezed through to the front had dried and when I pulled up the rug the tape came with it. This was then very hard to get off the front of the rug. It literally only needs to dry a few minutes before getting pulled up.)

I cut the fabric close to the edge. 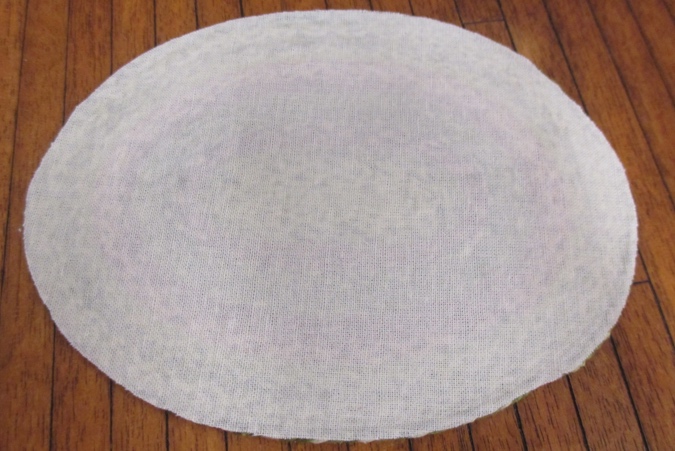 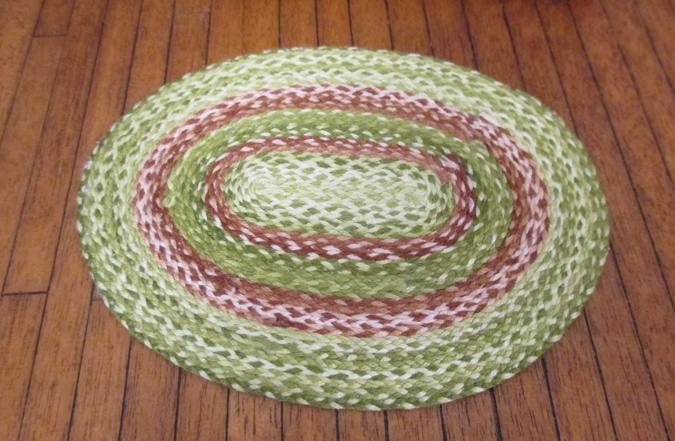 It covers up the light spot in the floor nicely. 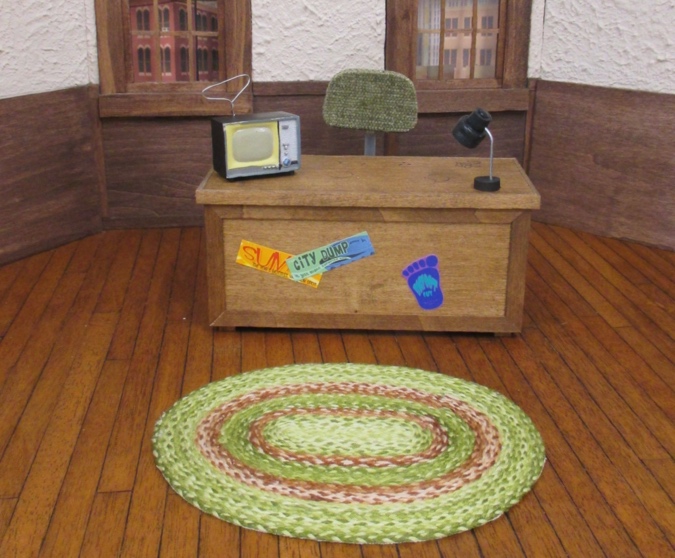 I also made an astroturf welcome mat to go outside the rat hole from a piece of Noch grass. I used the “Spring Meadow” grass because that’s what I had. The dark green “Grass Mat” would have worked better, but not enough better to justify buying a whole roll… 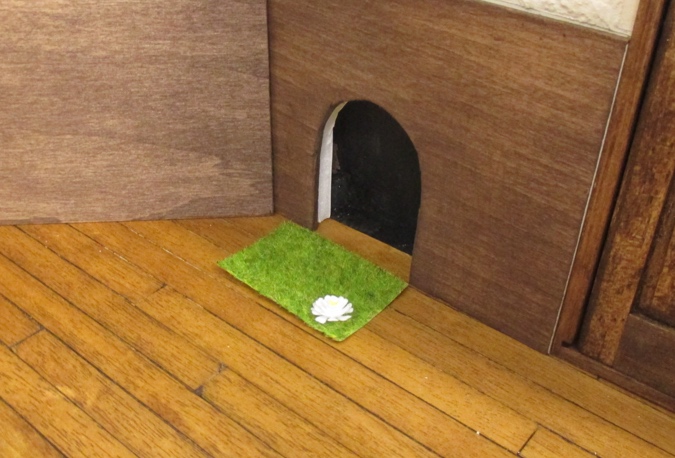 The white plastic flower came off a fake plant in my stash. I painted the yellow dot at the center. 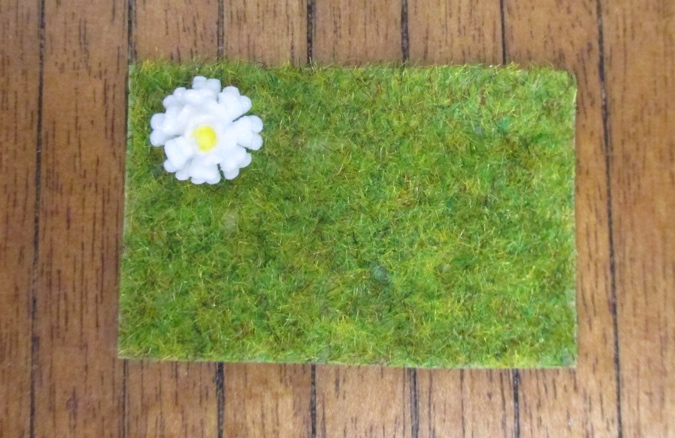 So that’s a little color added to the office. The strip wood I’ve been waiting for finally showed up in the mail, so I can move forward with gluing in the walls next. 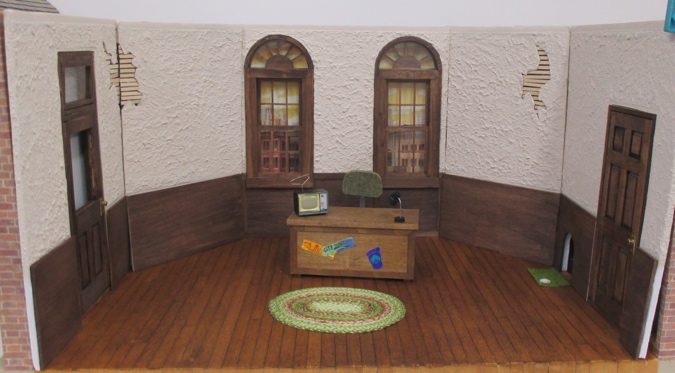 But while we’re on the subject of rugs… here are two others I finished recently. The first one is a Bakhtiari designed by Sue Resseguie of the Petitpointers online group. She kindly makes this design available for free to members of the group. The finished size is about 6 1/8″ x 9 1/4″, stitched over one on 40-count evenweave. 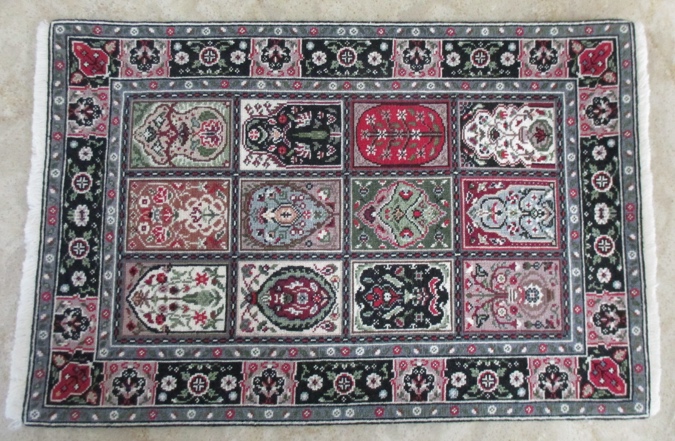 This is a *big* rug — it took me about a year to stitch (not counting time in between while I was working on the Thimbleweed Park afghan) and I have no idea what I’ll do with it. It’s large even for a 1:12 setting. Here it is in my Cypress and Fog roombox, to give an idea of how it will look in a scene. 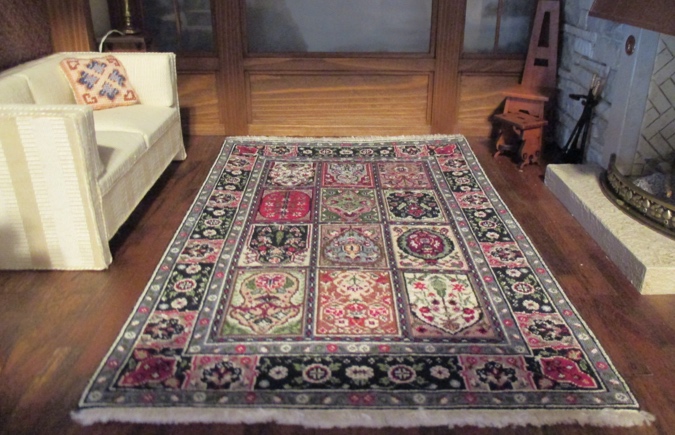 I love the intricacy of this design, but I wasn’t expecting it to be so dark. (Before I started it I don’t think I’d seen a picture of the finished rug, only the color PDF of the chart.) In hindsight I wish I’d substituted the gray in the border for a light blue, since that’s how I was seeing it in my head. By the time I realized I didn’t like the gray I had stitched too much of it. It’s really hard to frog (rip out) stitches in petitpoint.

The second rug is a William Morris-type design from Janet Granger’s book Miniature Needlepoint Carpets. The pattern is for wool and I converted it to DMC. Janet also sells this design as a kit and a chart on her website, and the chart comes with DMC conversions. 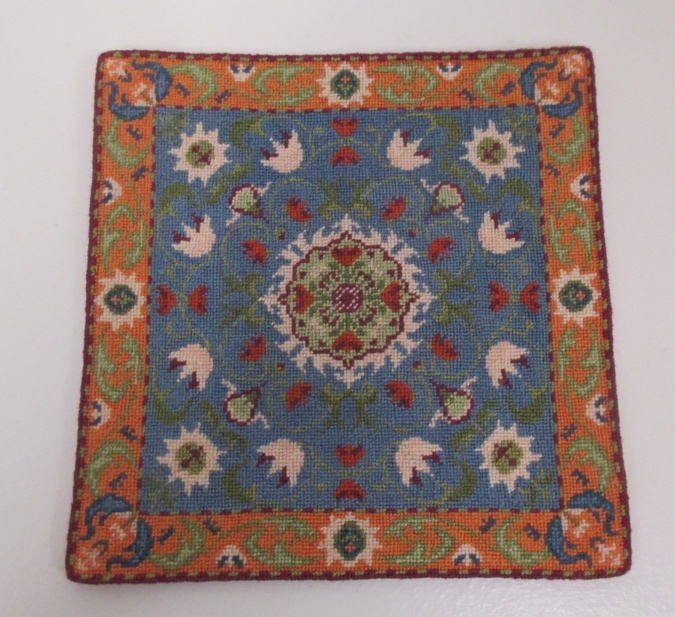 I stitched this over one on either 40 or 36 count evenweave (can’t remember). The finished size is about 4″ square, so it’ll work in a half scale dollhouse. I don’t have a spot for it yet, but here it is in the puzzle house just for kicks. 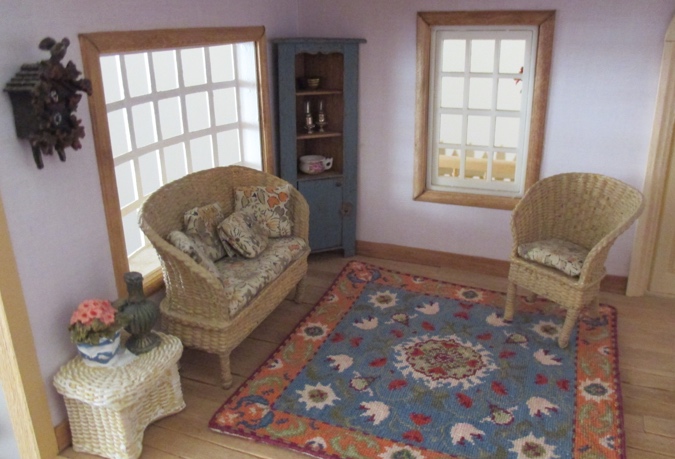