Before I can glue in the walls in Sam & Max’s office, I needed to finish the doors. The office door has a Freelance Police logo on the window. I had a few sheets of clear sticker paper left over from when I made mini Absolut Vodka bottles and life-sized spice jar labels, so I grabbed the texture using Telltale Explorer and printed it out. 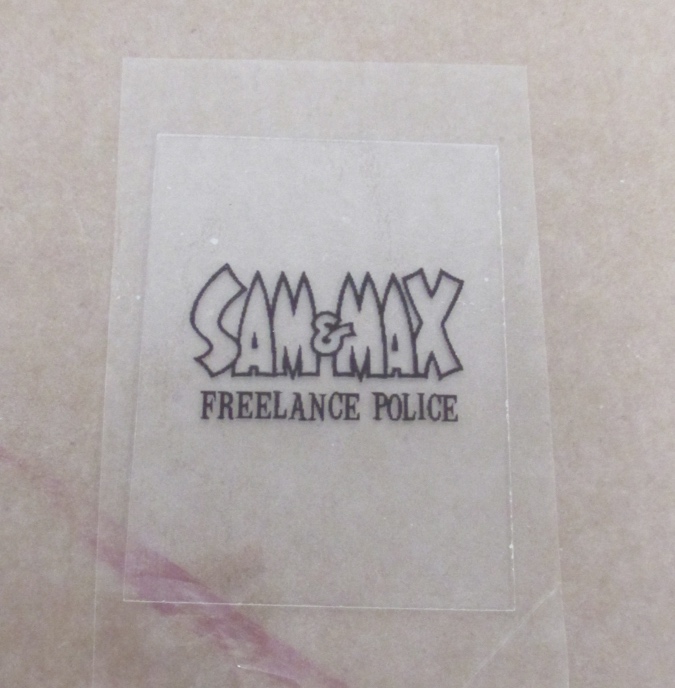 My idea was to lay the sticker sheet over the window glass, carefully smooth it down, and then cut around the glass with an Xacto knife. I attempted the same thing for the front window of the Blackbird Bar and it didn’t work — no matter how careful I was, I ended up with bubbles and creases and flecks of dust between the sticker and the plexiglass. But I convinced myself I’d do a better job this time.

Guess what? It didn’t work this time, either. 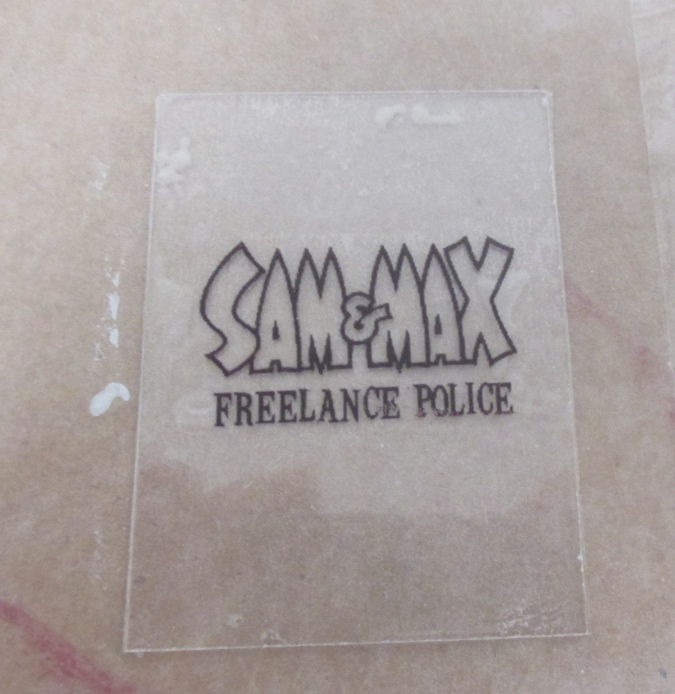 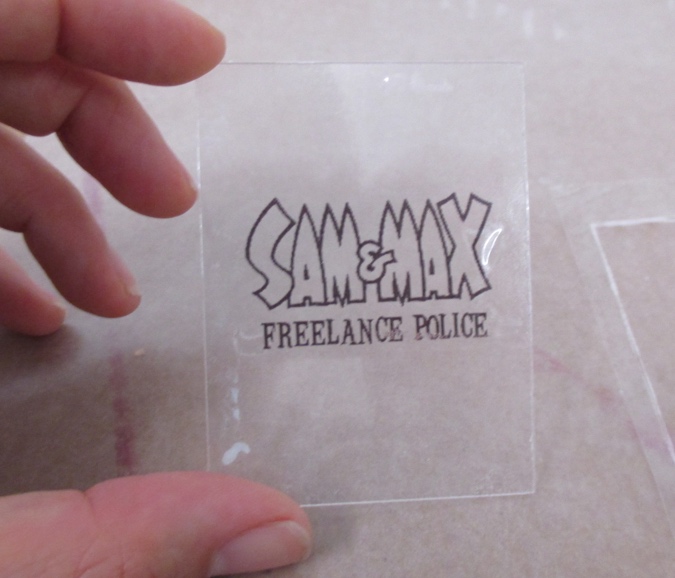 I had some replacement plexiglass in my stash so I tried again, cutting the sticker close to the edges of the logo. I was able to stick it on nicely, but I didn’t like the visible outline around the logo. 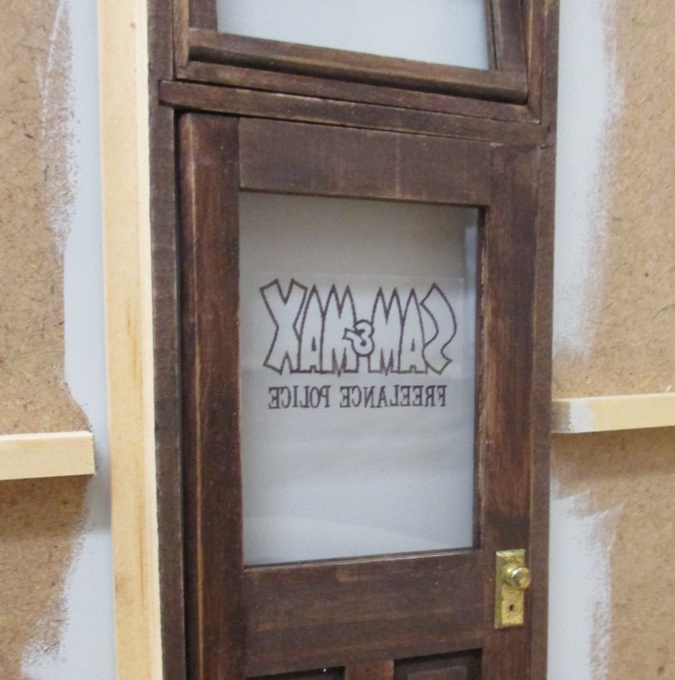 So I went back to the internet looking for inkjet transparency sheets. I wanted something stiff like the plastic that comes with a die-cut dollhouse kit. (I know such a thing exists because the stained glass windows I bought for the Victorianna are printed on it.) I thought that’s what I was getting when I bought this 6-pack of inkjet transparency film, but this film is thinner, more like what you’d use on an overhead projector. But I can still use it, supported by a thicker piece of plexiglass.

The first package of transparency film was shipped in a padded envelope and arrived creased in half. I reported it to Amazon and they sent a replacement. Separately I bought a 2-pack of .030″ plexiglass from KitKraft, since by this point I had ruined all my spare pieces with the sticker attempts.

When I finally had everything I needed, I printed out a few logos. I printed them out as a mirror image so the reverse image (which is what you see when the door is closed) was on the printed side. This allowed me to sandwich the printed side against the thicker piece of plexiglass, so the ink side isn’t exposed to the air. I hope this will prevent the ink from fading. (I didn’t want to spray this with my UV-resistant sealer, which would take away the gloss of the transparency film.)

I cut a piece of thin cardboard to the correct size of the window, and used this is a guide to first cut the .030″ plexiglass and then to cut the transparency film. 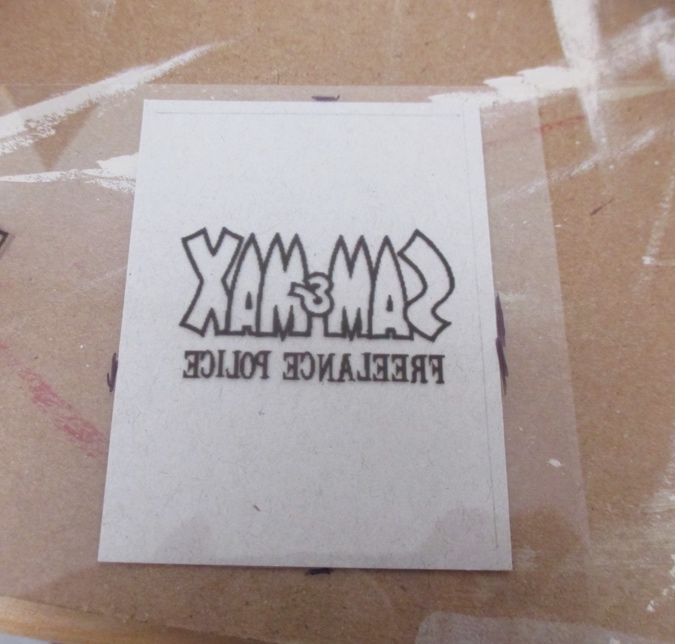 As I was putting this together, I was careful to hold the plexiglass and the film from the edges to keep from getting fingerprints on them (especially on the inside where they’re sandwiched together). This is the back of the door, and you’re looking at the back side of the transparency sheet, with the plexiglass behind it. The film would have been much too flimsy to use as a window by itself, but flush against the plexiglass, it stays in place. 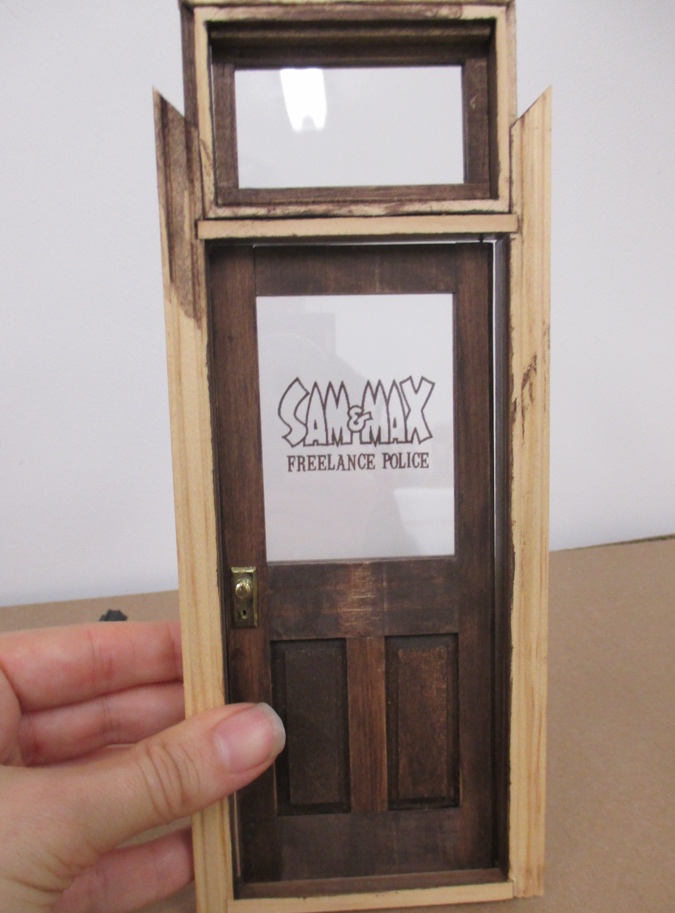 And here’s the door in place. Ironically it looks like there’s a horizontal seam above the logo, but there isn’t! That’s just a reflection. 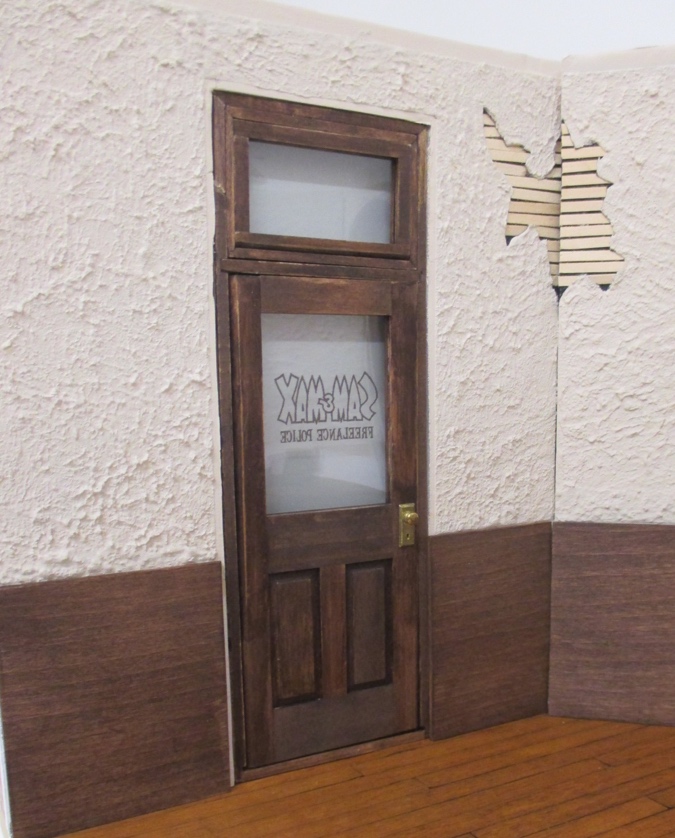 On to the closet. Since I didn’t have room to build in a closet, I faked it the same way I did the bathroom in the Blackbird Bar. I cropped the closet out of a screenshot from one of Telltale’s Sam & Max episodes and Photoshopped it to the right dimensions. Then I printed it out on glossy photo paper, sprayed it with the UV sealer (which made it matte), and let it dry for 24 hours. 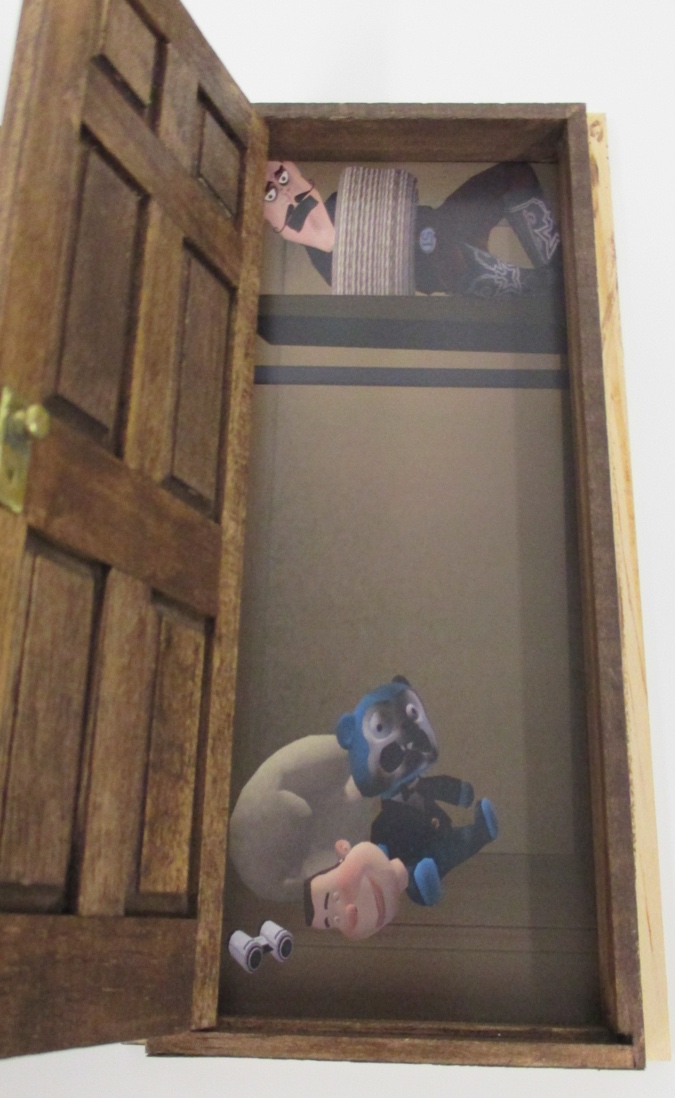 In Telltale’s games, a souvenir from each episode is stashed in the closet in the following episodes. In episode 3 this souvenir is a poker player named Leonard Steakcharmer. This is one of my favorite gags from Sam & Max Season One, so I had to replicate it here. 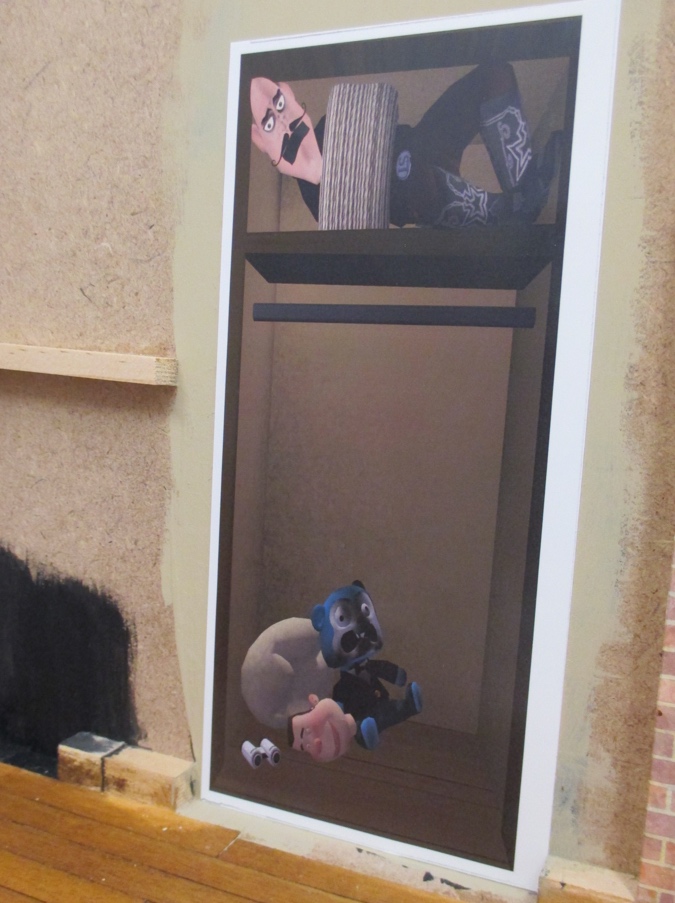 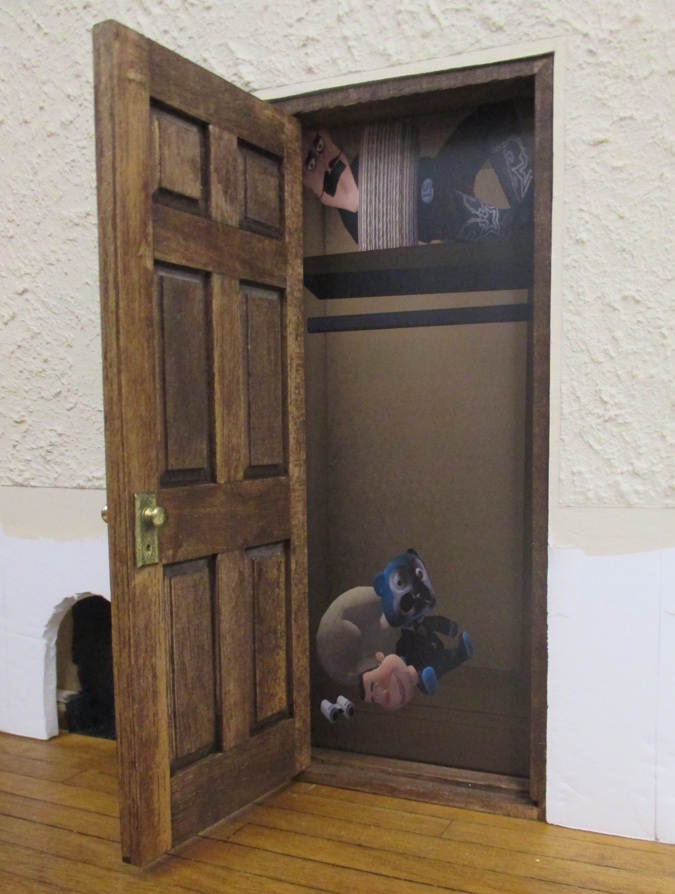 The closet wall was very warped from when I applied the wood filler stucco without first putting supports on the back. I added 3/16″ strip wood around the door hole to attach the door to, and 3/8″ wood to other portions to bridge the gap between the foam fore and the roombox wall. I put under a heavy book to dry overnight. This worked well and the wall is nice and flat again. 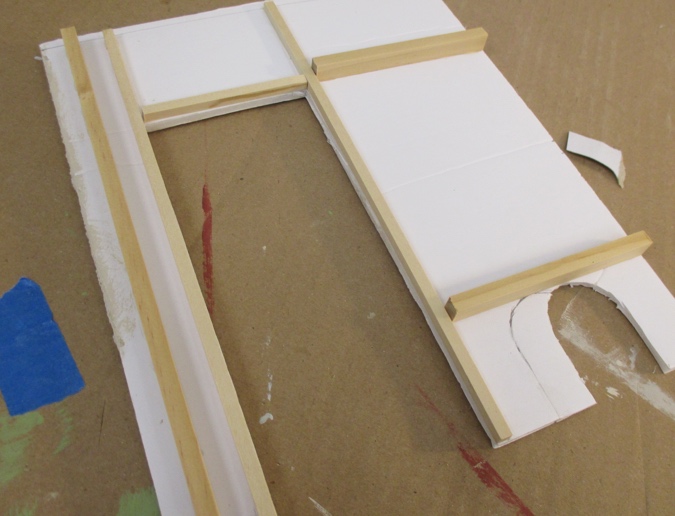 Next I glued in the doors. 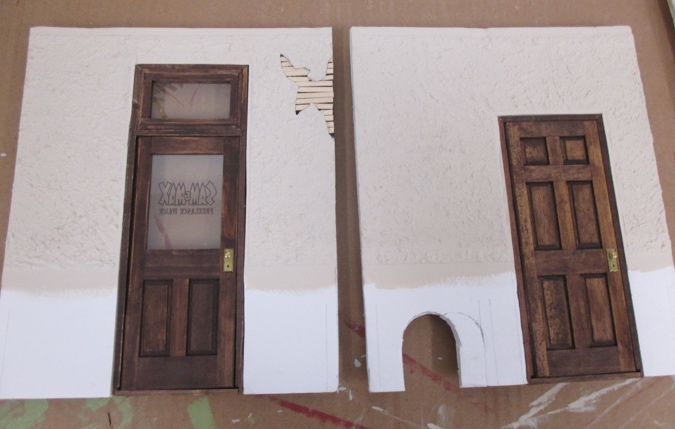 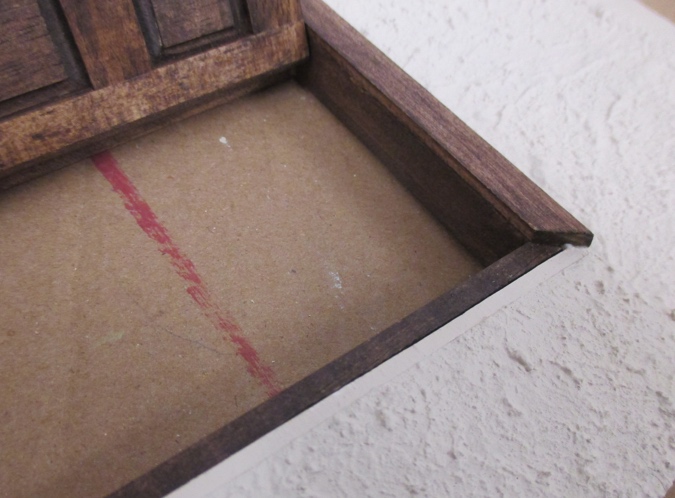 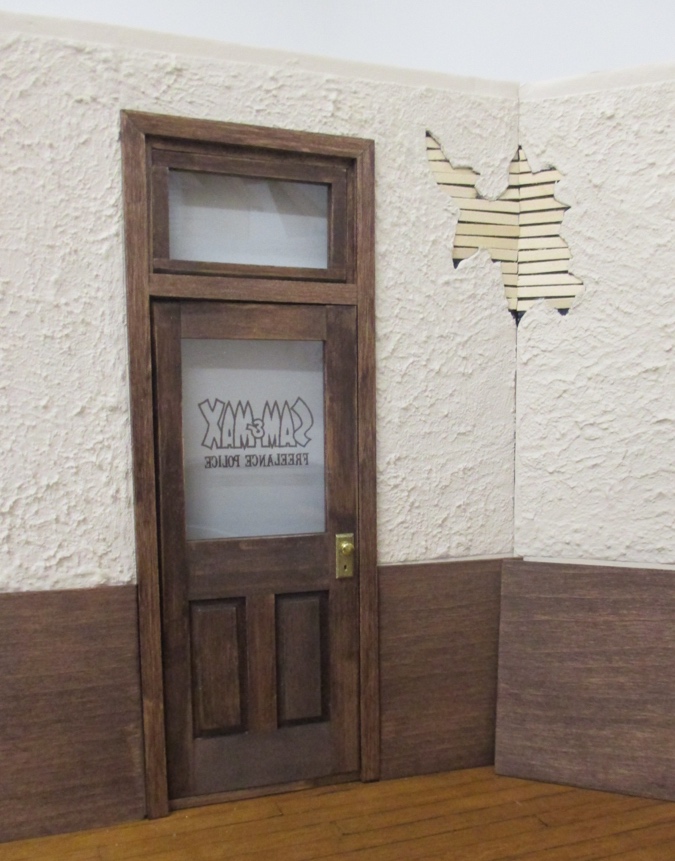 And the finished closet door. 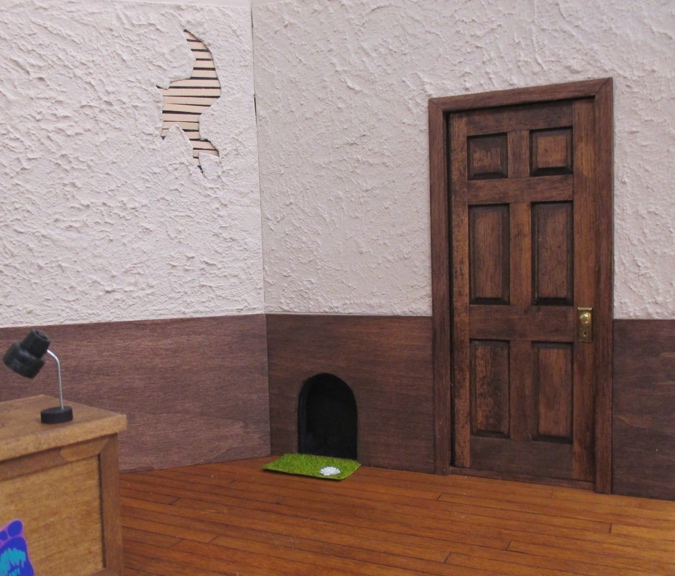 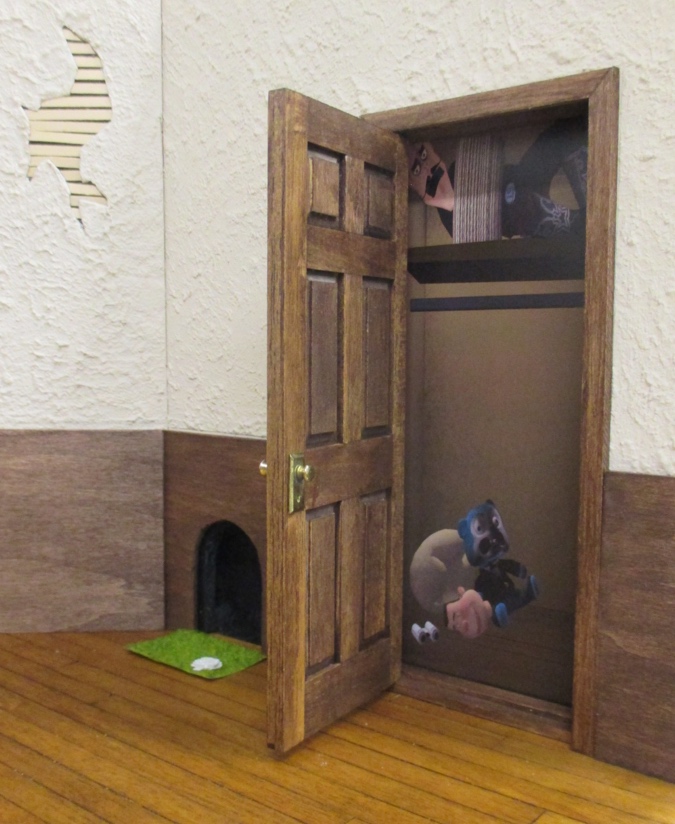 One last little thing — when I had the sticker paper out, I printed the I “Heart” Coffee texture from Sam’s coffee mug. 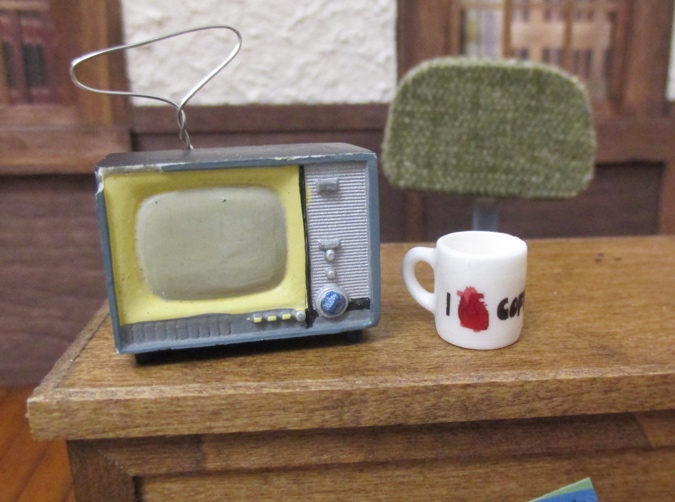 That’s it for today. With the doors complete, the next step will be to glue in the walls, and then finish the wainscotting and trim. 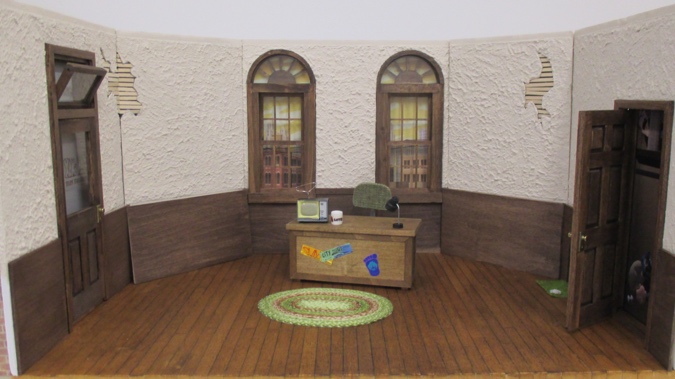