Boss Fight Studio says their Sam & Max figures are *finally* close to shipping, so I decided to dust off the Freelance Police office that I finished a year ago and start cluttering it up.

I’m waiting for the figures to get here so I can use them as a size reference for building furniture, but in the meantime I’ll work on some accessories, starting with — drum roll please — a dead plant and a severed hand! 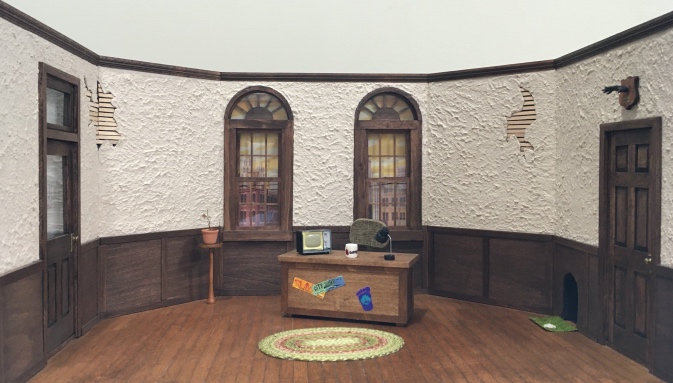 The dead plant, which happens to be named Hubert, sits on a small table near the window. 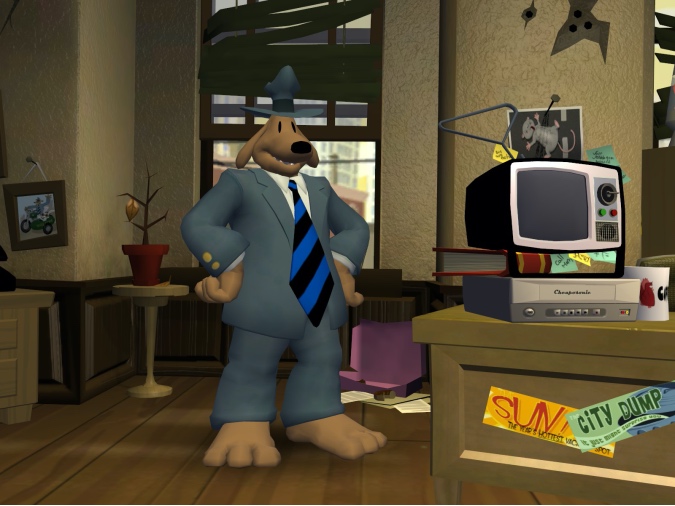 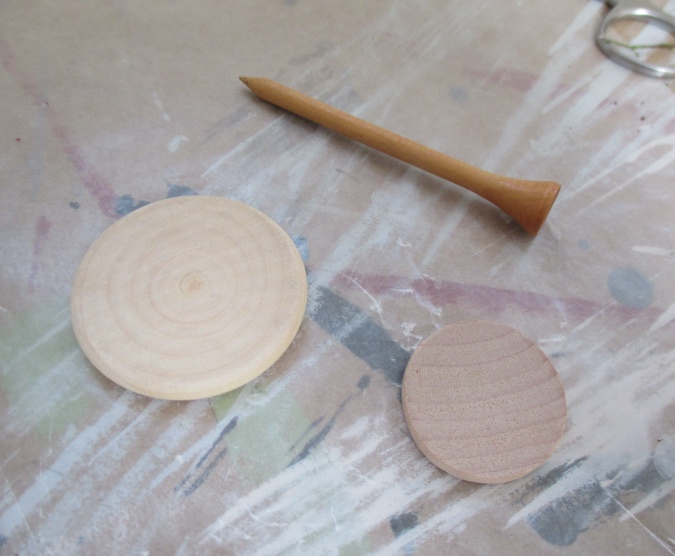 The golf tee has a finish similar to Golden Oak stain, so I stained the disk to match it. Then I cut the tip off the tee and drilled a hole in the center of the disk the same diameter. First I did a pilot hole with my micro drill, shown here, and then I drilled the larger hole with the power drill. 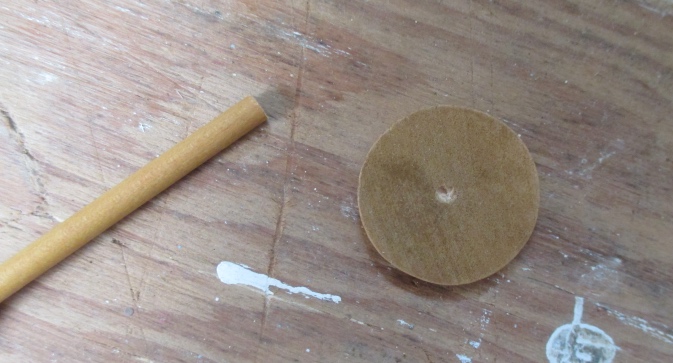 Next I made the plant. I filled a 1:12 terracotta pot with air dry clay.

This is a piece of caspia basil with the leafy parts removed. I cut off a segment and painted it brown. 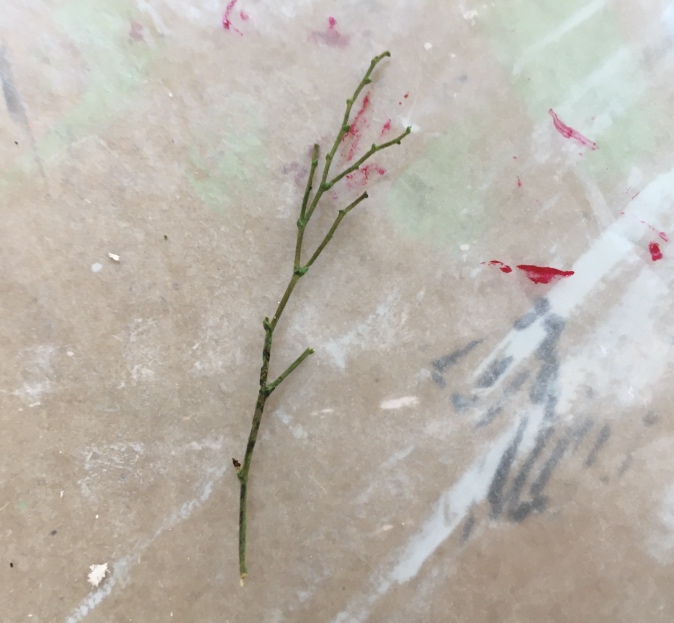 I poked a toothpick into the clay to make a hole, and then smeared glue on the clay. I kept the toothpick in during this process so the hole wouldn’t get plugged up. 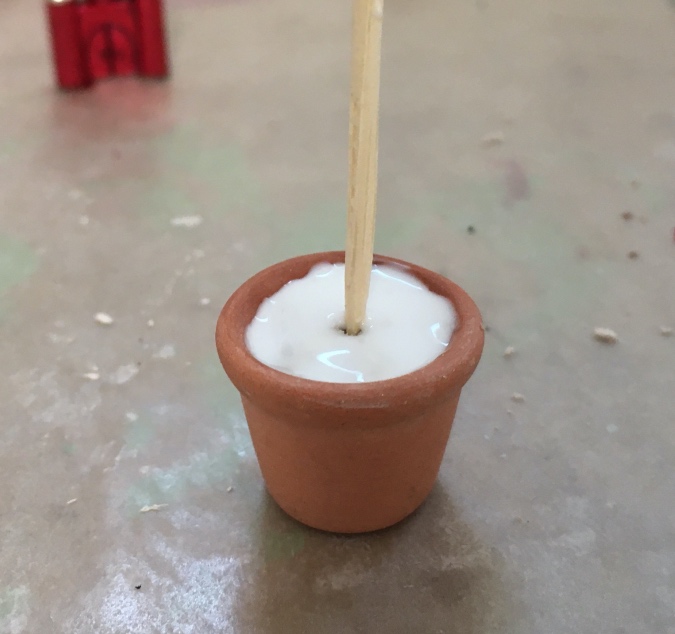 I added coffee grounds for dirt, and glued the painted caspia basil piece into the hole. 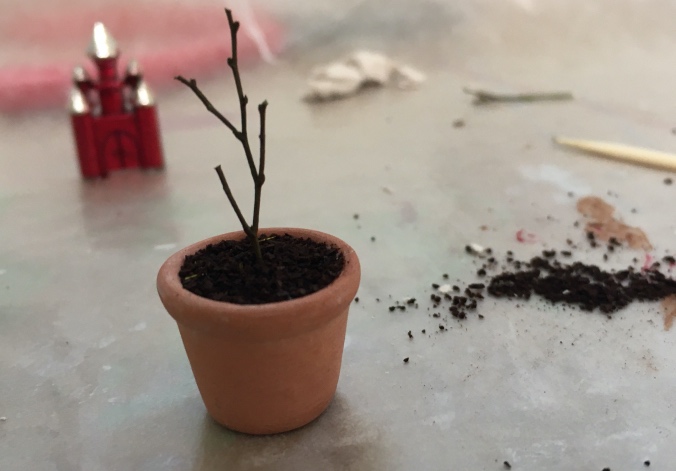 Then I glued on one dead leaf. This is “leaf litter” left over from the fall section of the Four Seasons Roombox. 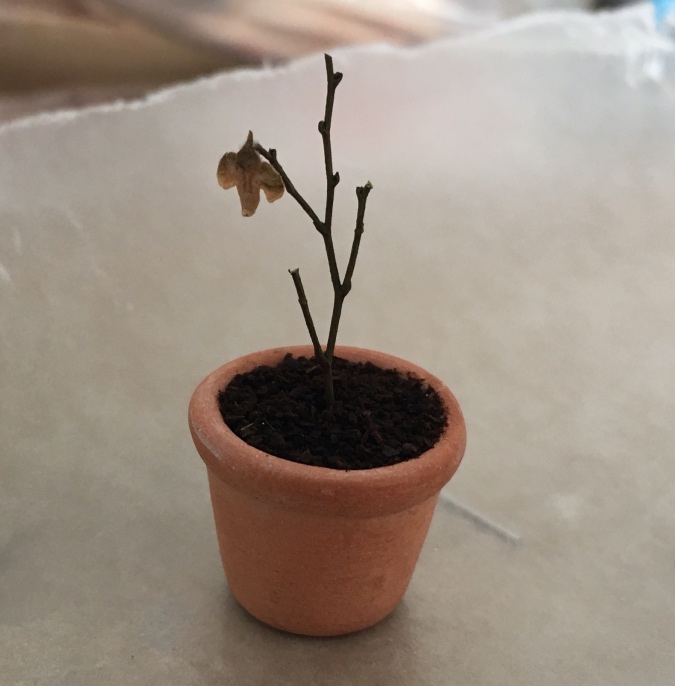 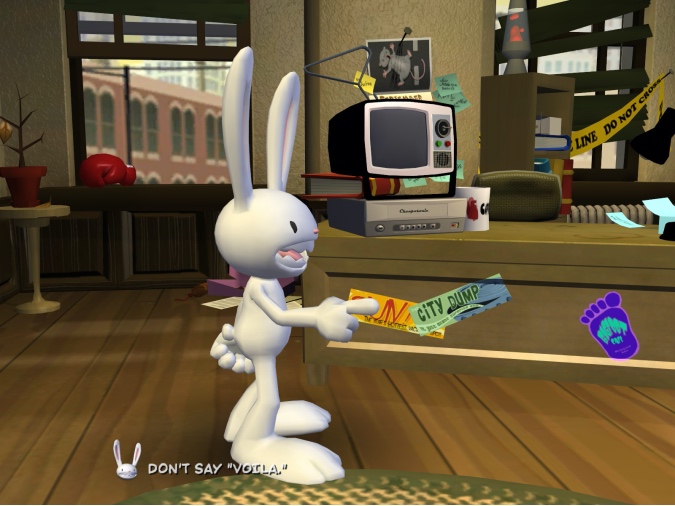 The plant is okay, but I didn’t like how the table turned out. The light colored stain doesn’t match the rest of the room. 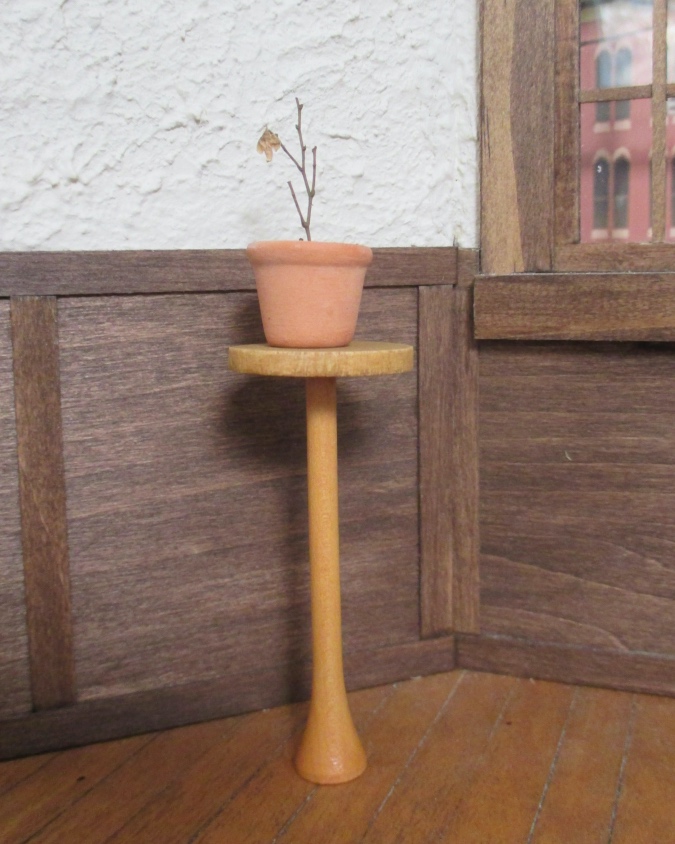 I sanded it with fine grit sandpaper and applied a coat of Minwax Aged Oak gel stain. This is the same stain I used for Sam’s desk. The golden color underneath changes the tone but it still darkened up nicely. I’m not sure if this would have worked with regular stain, since the sandpaper didn’t take all the shiny finish off the tee, but gel stain works over polyurethane. 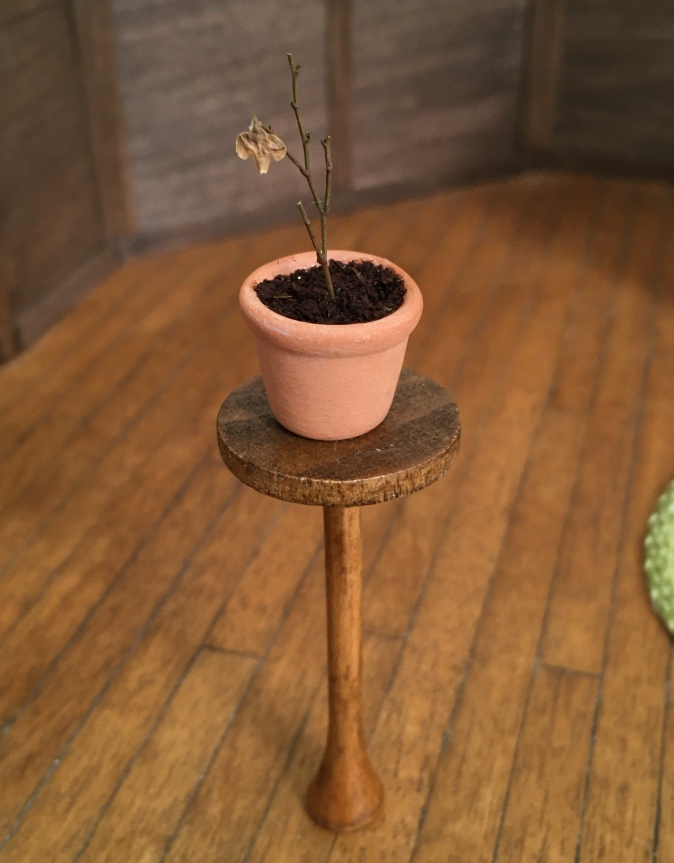 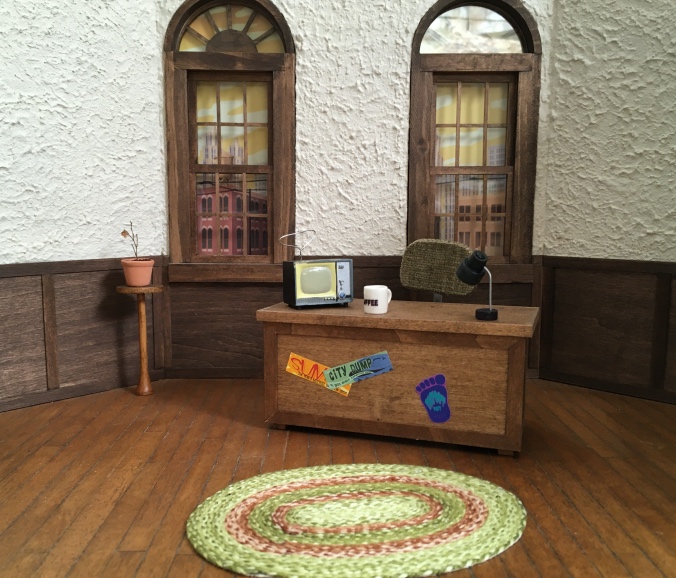 Moving on to Jesse James’s severed hand. The Freelance Police acquire this in their 1993 game Sam & Max Hit the Road, and in Telltale’s series (which my roombox is based on) it’s mounted to a plaque above the closet door. 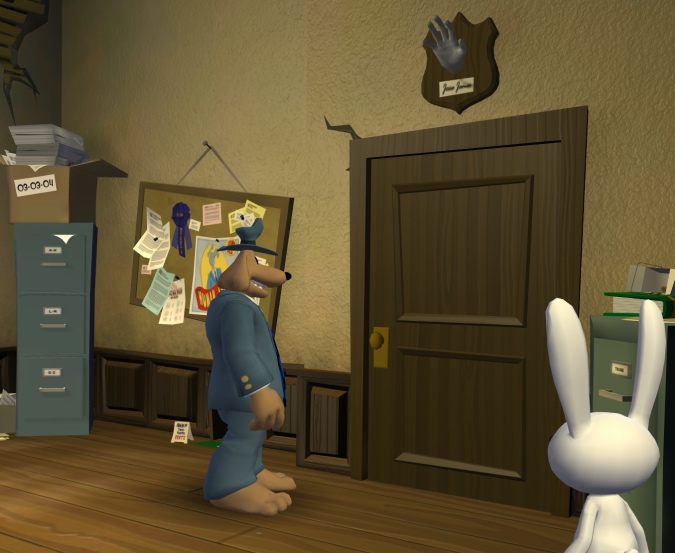 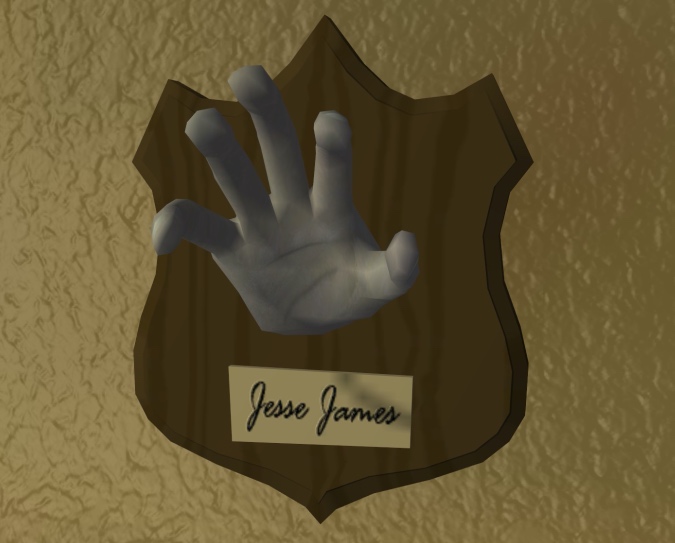 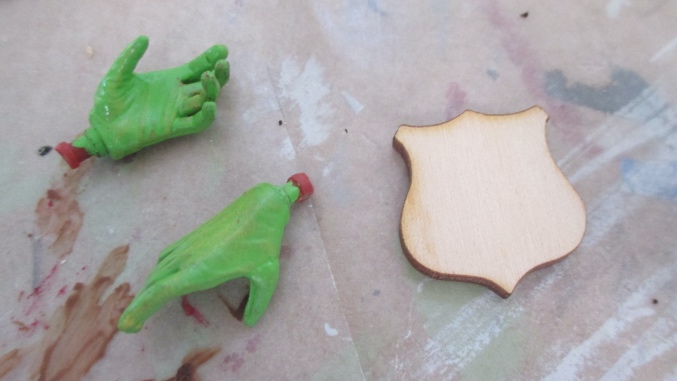 I started by cutting the end off the hand and drilling a hole in the plaque for the nub to fit into. 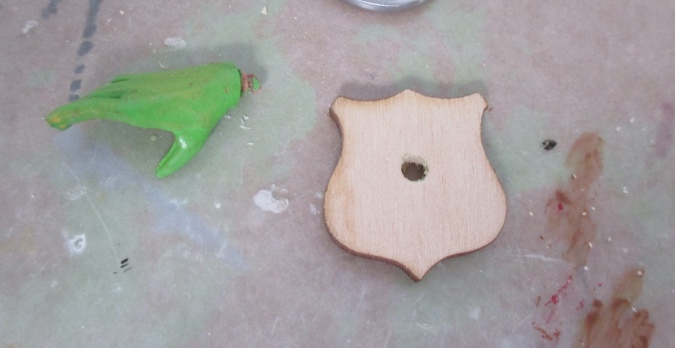 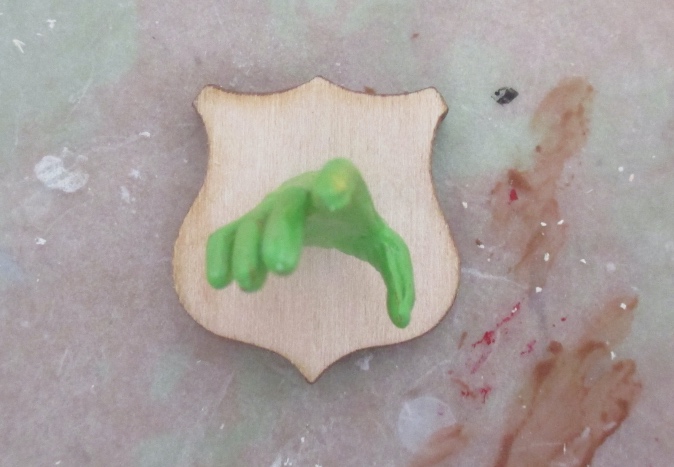 Then I stained the plaque with Minwax Mahogany gel stain, which is the same color I used for the roombox trim pieces. 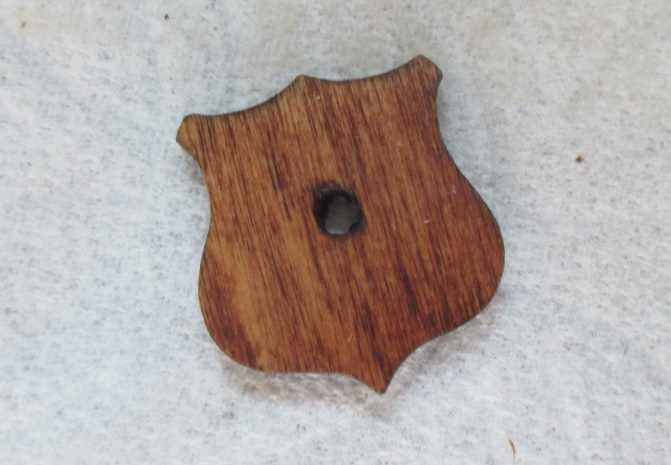 I painted the hand black, but let some of the green show through. 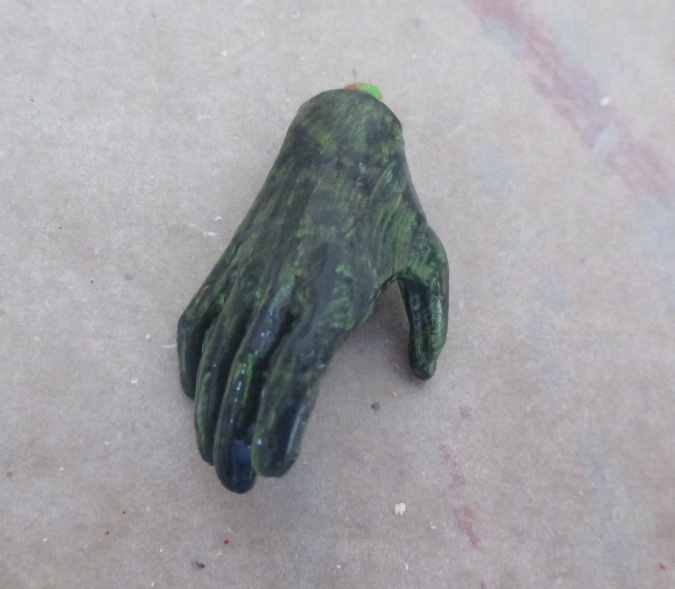 Here it is in the plaque. Seeing it made me realize — that’s a really big hand! 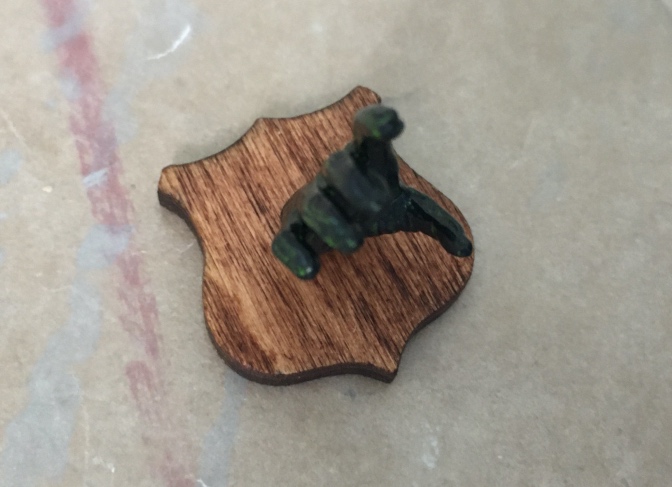 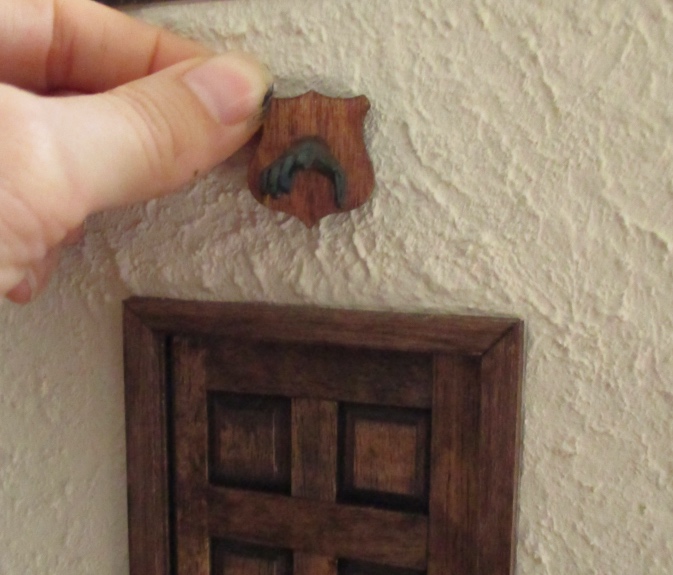 I pulled out the bartender from the Blackbird Bar, who is also a 6″ action figure. There’s no way the hand I got off eBay is 1:12 scale, even though the auction explicitly said it was. Grr. 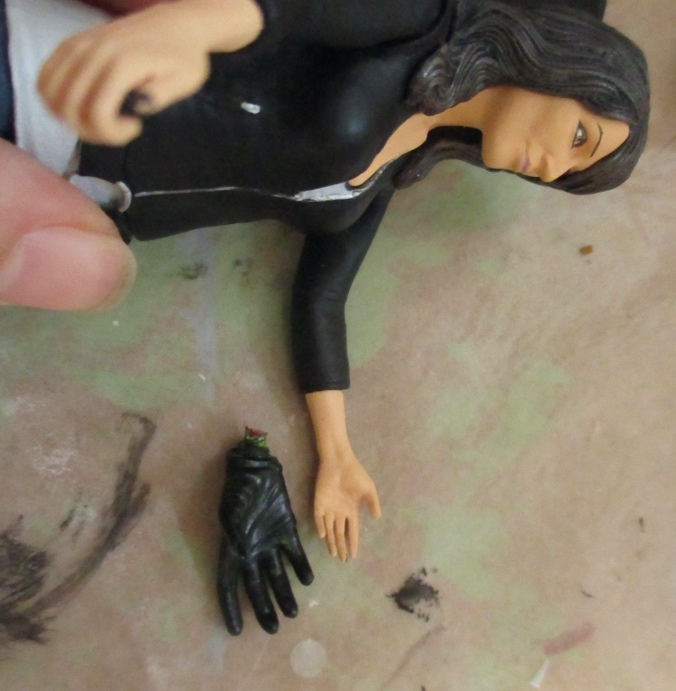 Back to the drawing board. This time I placed an order with Black Ops Toys for a Weathered Gloved Hand Set. Here’s the new hand next to the original. The one I bought on eBay must be 1:6 scale, for 12-inch dolls, not 1:12 scale, for 6-inch dolls. (Grr, again.) 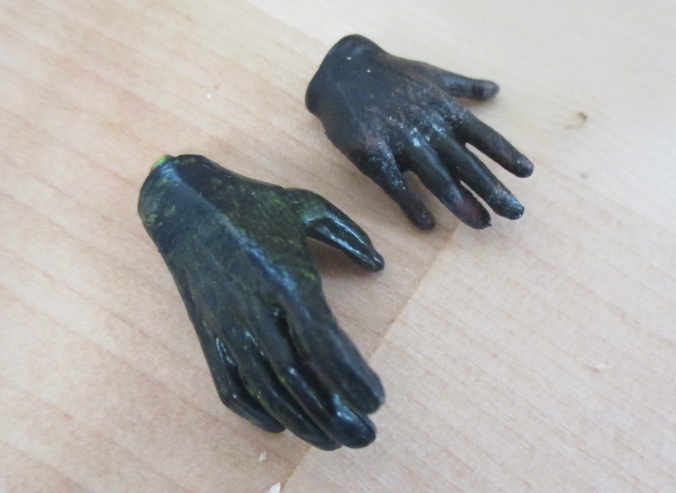 Luckily I’d bought extra plaques so I didn’t have to reorder those. And since the new hand is an appropriately dead color, I don’t have to paint this one. 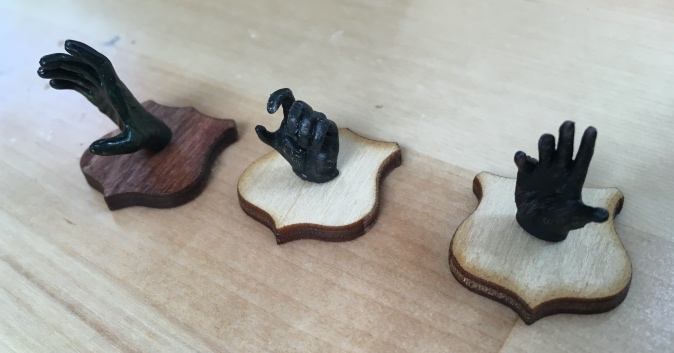 The new hand has a hole at the back, rather than a nub. I drilled a toothpick-sized hole in the plaque and glued in a small segment of toothpick, to attach the hand to. 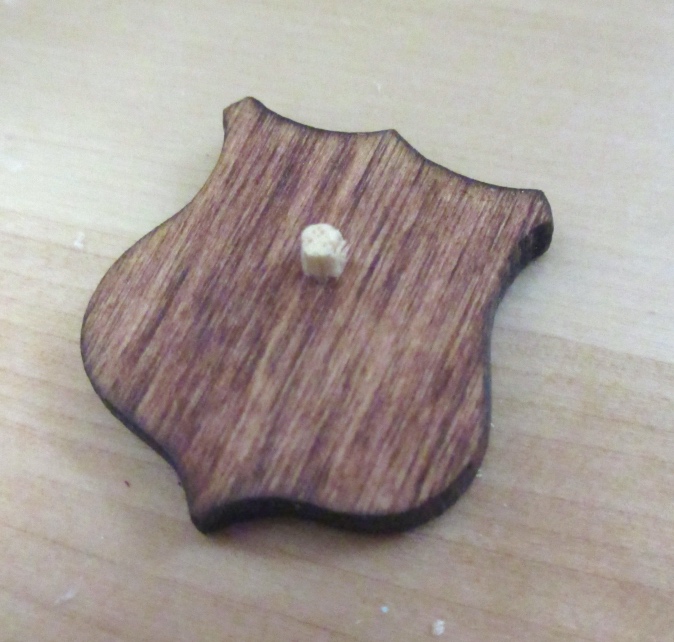 Before gluing on the hand, I added the Jesse James nameplate, which I’d extracted from the game using Telltale Explorer. I sealed it with gloss varnish, which isn’t super glossy, but makes it a little sturdier. I also went around the white paper edge with a gold Sharpie. 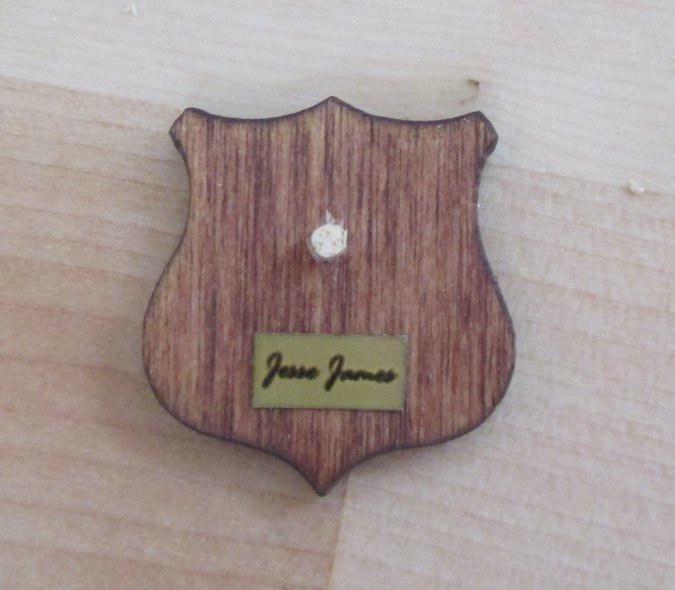 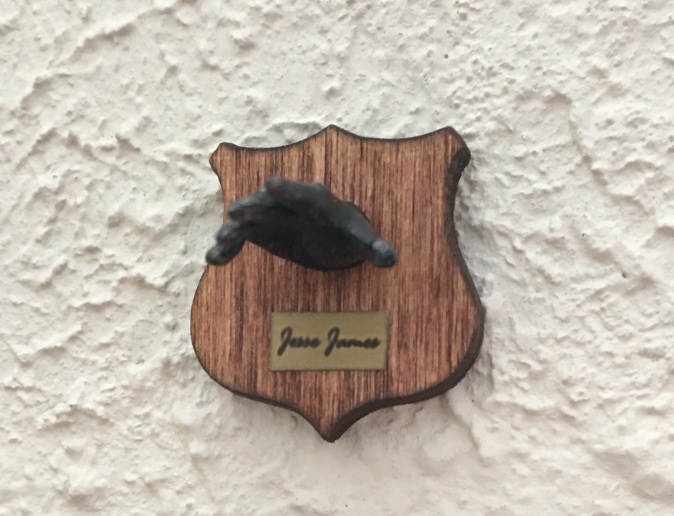 In case you were wondering, Leonard’s still in the closet. 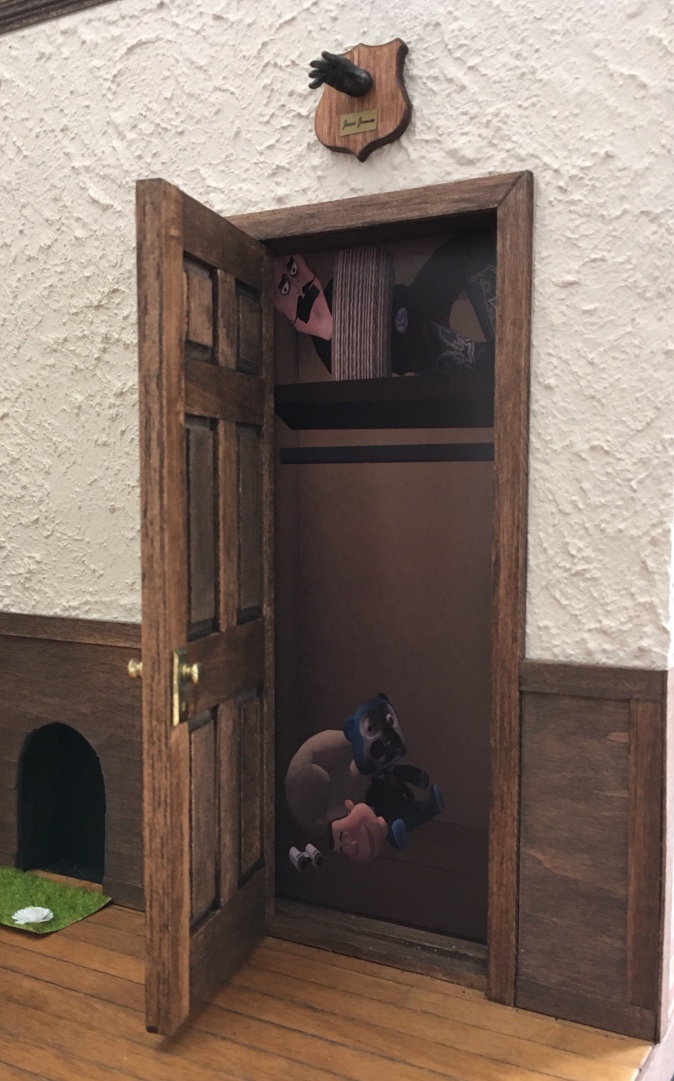 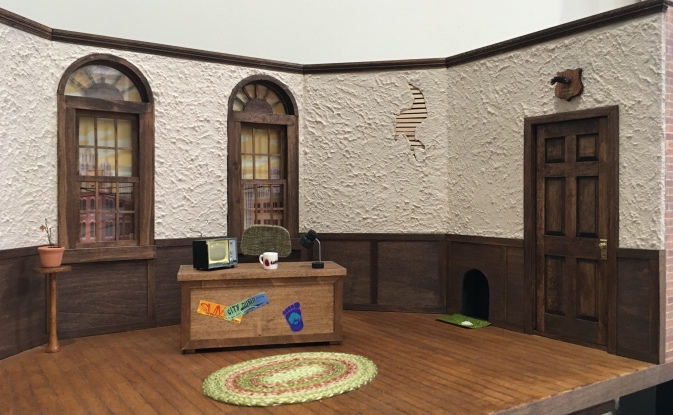