Now that I’ve added 1/2″ of depth to the front of the Mansard Victorian to accommodate the side addition (shown here and here), I need to finish the front edges of those pieces before starting on the inside of the house… which means I need to decide how the house will be finished.

My original idea was to model this house after the real house that the dollhouse is based on, with dark stone and quoins at the corners. 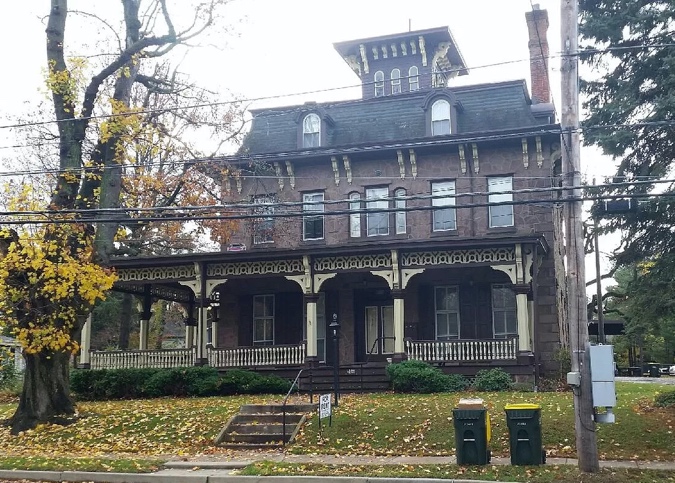 I’m a fan of egg carton stone, but I’ve mostly used it for foundations. It seems bulky for an entire house, compared to the stone on the inspiration house, which is flat and subtle. I also didn’t want my house to be as dark as the original.

I can’t remember exactly what search term pulled this one up, but I immediately knew I had a winner. 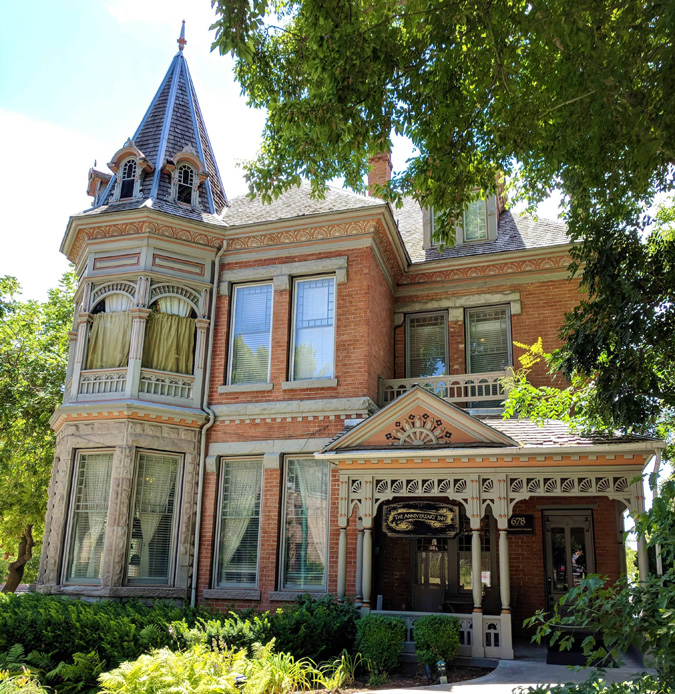 This is the Emanuel Kahn mansion in Salt Lake City, Utah (more pictures here). The house is now a bed & breakfast with some crazy rooms!

This house caught my eye for several reasons. The egg carton facade won’t be as bulky with bricks as it would with larger stones. The bay window placement is similar (although mine doesn’t have a roof), and the top bay window on this house seems to be a balcony converted into windows, just like mine will be.

The windows coincidentally have the same mullions as the windows I’m using, and the trim under the roof is reminiscent of the trim I picked out to go under my roof. 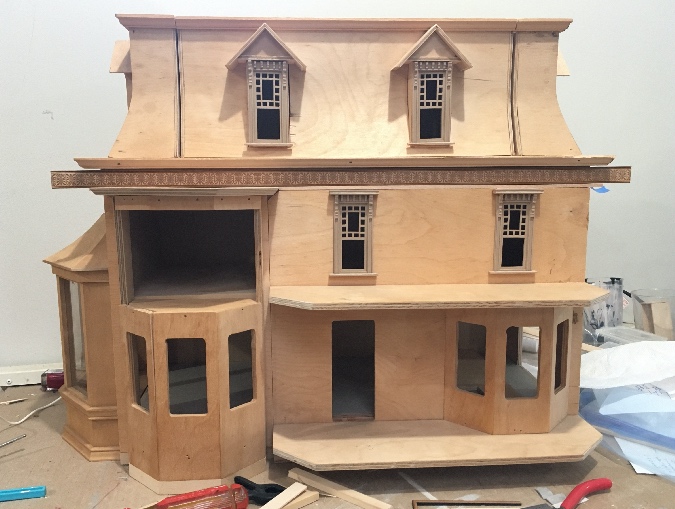 The Emanuel Kahn house doesn’t have quoins, but its stone trim gives an idea of how quoins will look next to the bricks. And the orangey color of the bricks will go well with the light green paint I’m using inside the house, inspired by these Bauder-Pine furniture pieces. 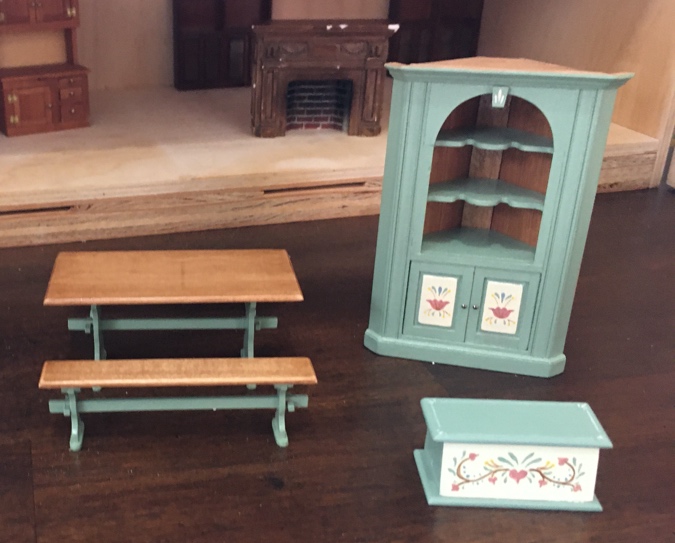 So now I had to figure out how to make quoins. This front-opening dollhouse originally had two hinged panels, but I removed the hinges and glued the panels together to create one big panel that stands up by itself. The quoins will work better this way, since I don’t have to worry about them interfering with hinges, but they still need to straddle the removable corner.

I was having trouble visualizing how to attach egg carton pieces over the corner and still have them be removable, until some more googling led me to these OO scale quoins on eBay. 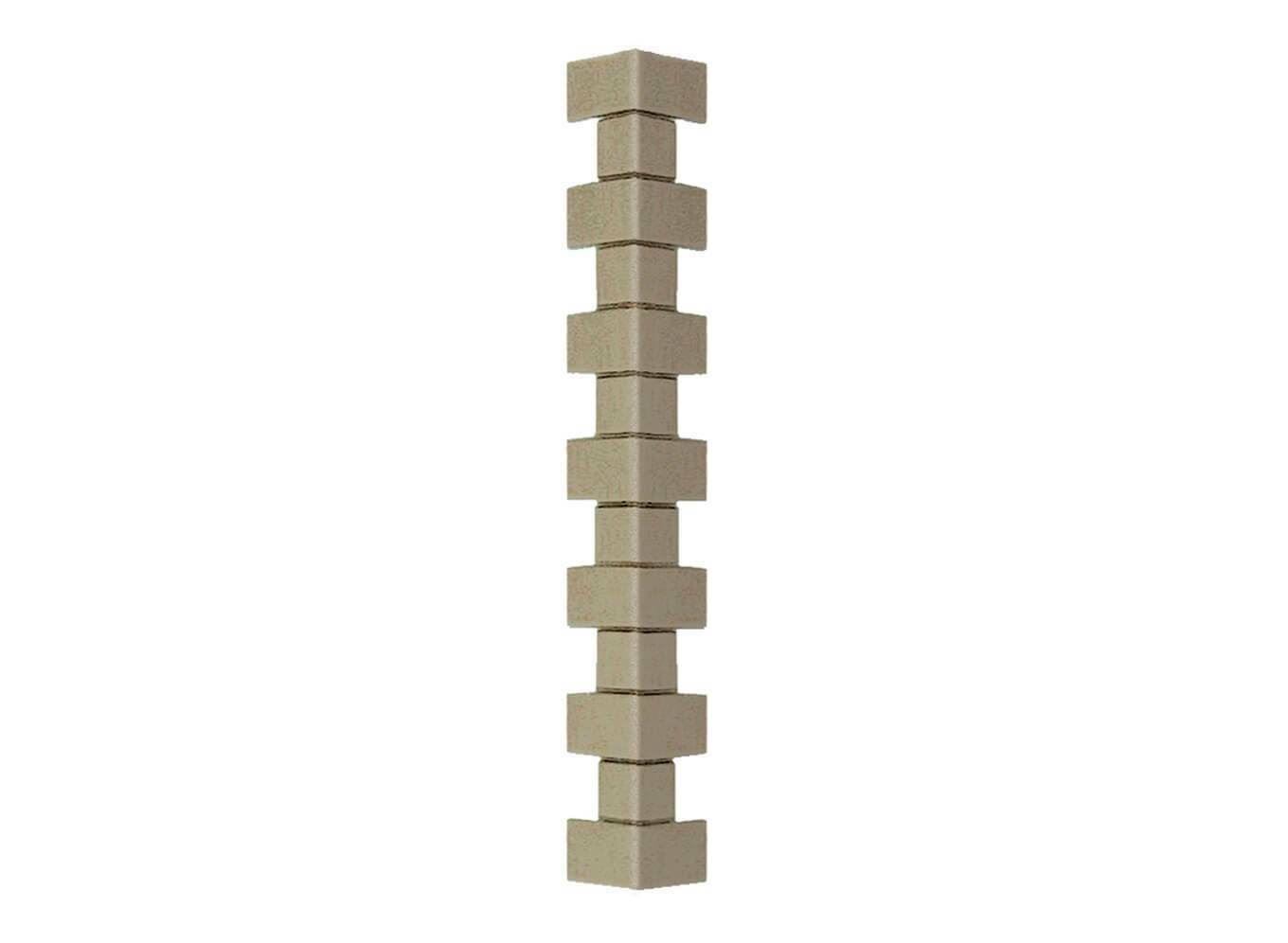 The lightbulb went off over my head: I can fold egg carton pieces over a piece of corner molding and attach this to the panel. The molding under the egg cartons will provide support so the panel can be removed without the longer pieces getting bent and damaged.

All right, let’s try it! I cut a piece of 3/8″ corner molding to fit along the side of the panel. I cut the top at an angle so it will fit under the top of the bay window — sharper than it needs to be, but this will be covered up by a quoin. 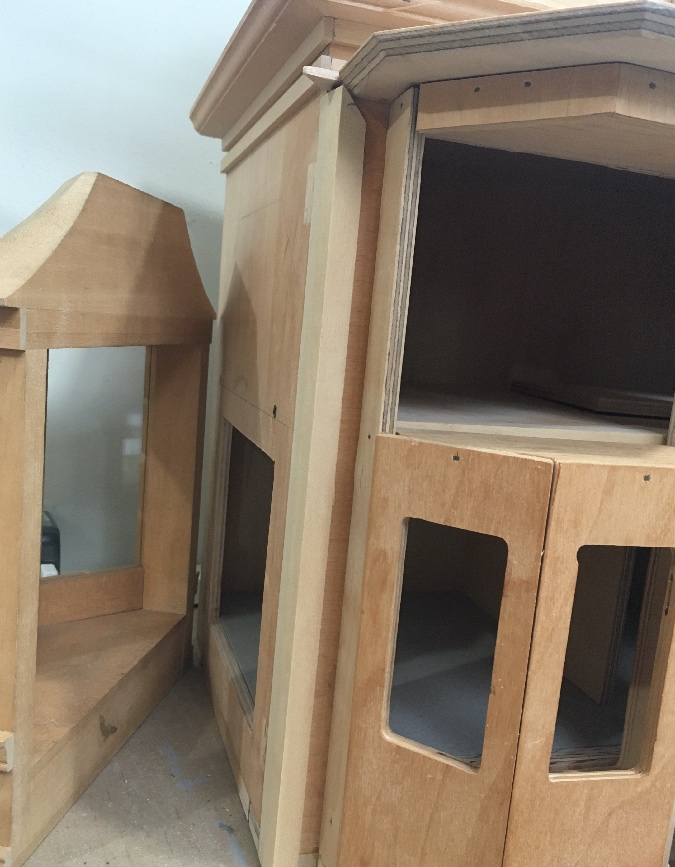 The side addition isn’t attached yet, but the roof extends onto this corner a tiny bit. I marked the overlap and then sanded it out with a circular file. 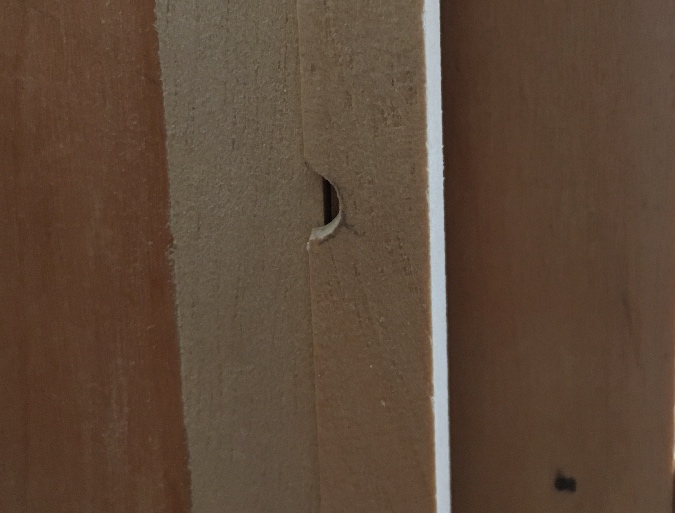 The roof fits into that slot. 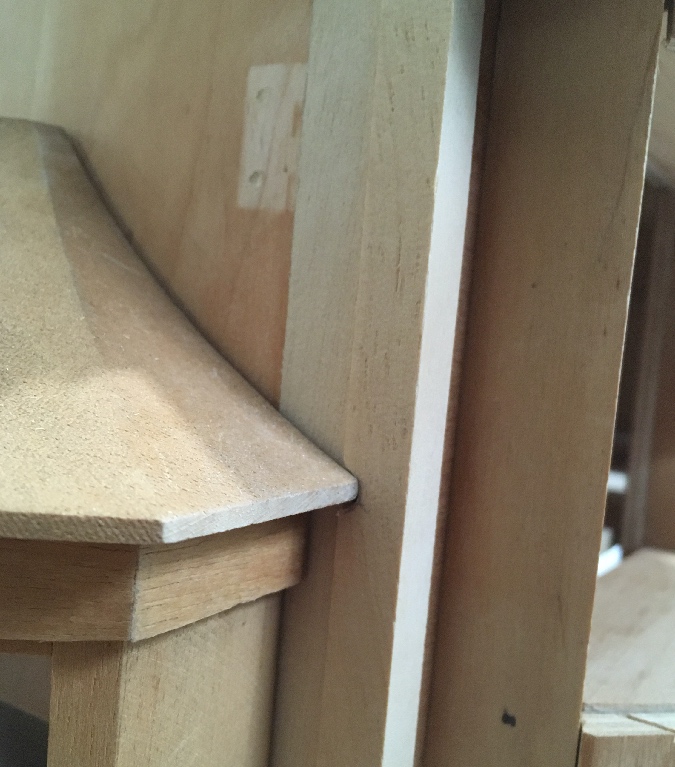 Then I started gluing egg carton pieces onto the corner molding. I made these 1/4″ tall, simply because cutting a strip of egg carton along the edge of my 1/4″ ruler is easy. The small ones are 7/8″ long (which just covers the 3/8″ corner molding when folded in half) and the long ones are 1 1/2″. I snipped the corners of each quoin with nail scissors to round them. 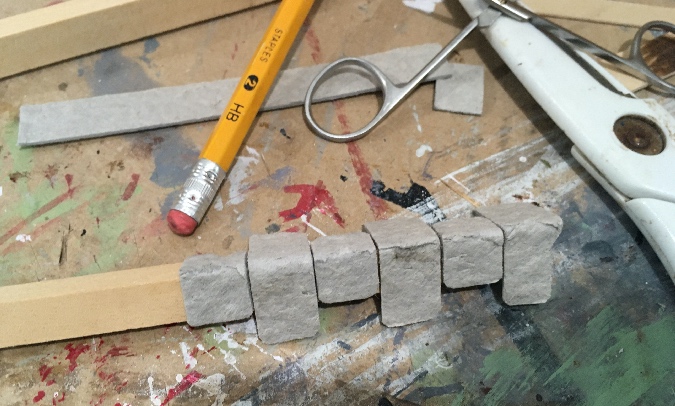 The corner molding does provide support, but the longer quoins could still get bent. I might glue pieces of wood to the backs to give extra support. 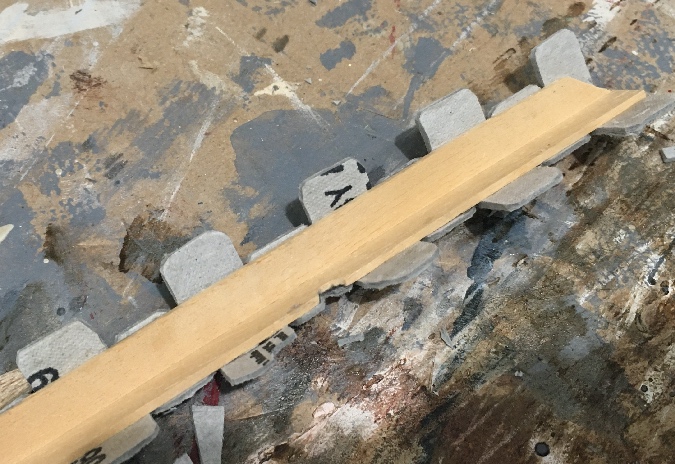 The stones under the bay window roof and next to the addition roof needed to be modified. I like egg cartons because they’re so easy to cut. 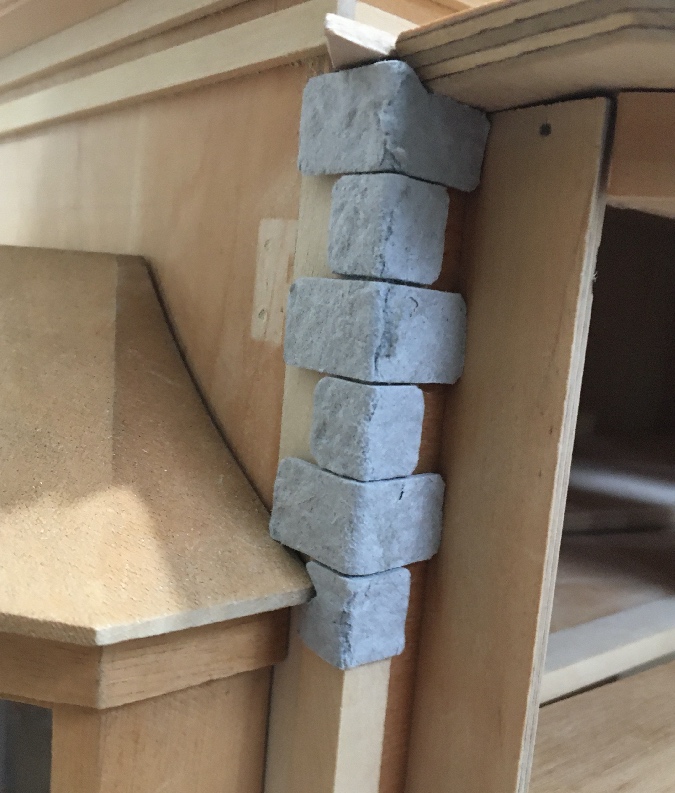 Here’s the finished strip of quoins. 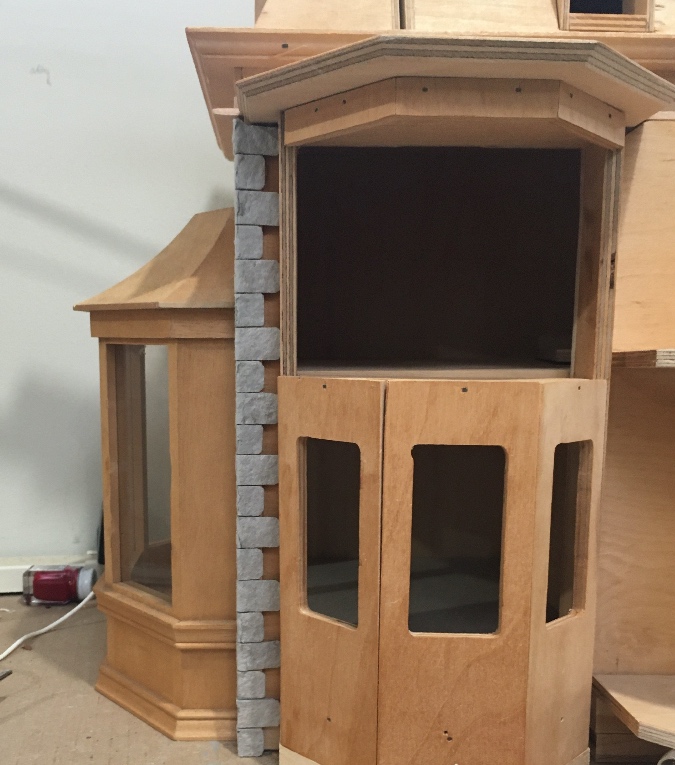 So, great! I figured out how to make quoins. But something was bugging me. Is this really what quoins look like — longer stones alternating with shorter stones? 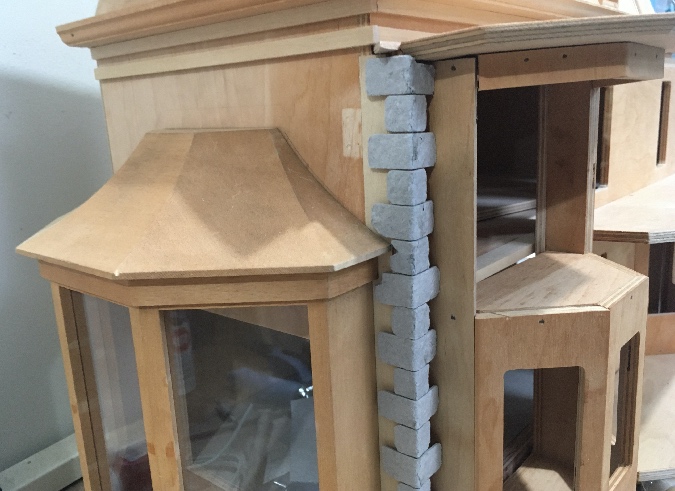 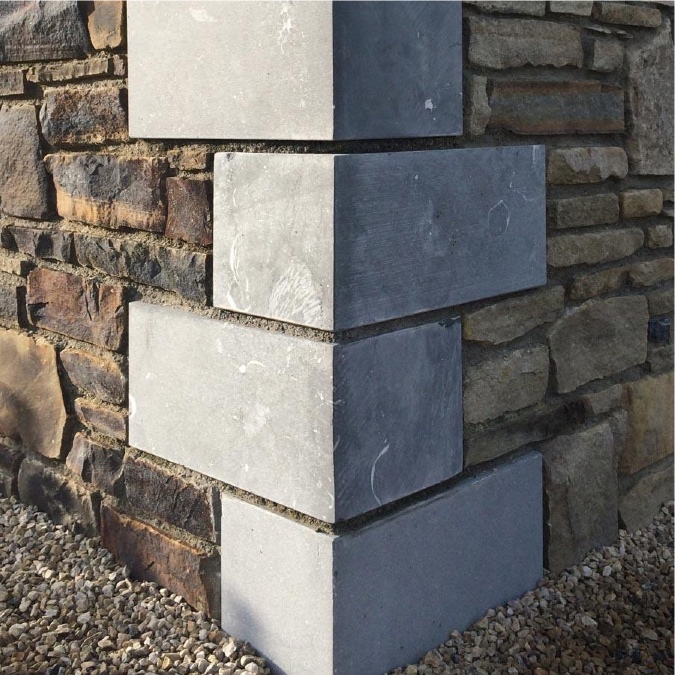 The OO scale quoins on eBay led me astray. In real life quoins are made from stones of equal size, alternating between the long edge and the short edge. Most pictures of quoins show the building from the front, so you don’t see this pattern.

I might not have had the idea to attach these to the corner molding if I hadn’t seen the OO scale quoins, so I don’t regret the attempt. I’m not ready to attach these to the house, so I’ll set them aside for now and see how I feel when the time comes. It’ll be easy enough to make new ones that alternate the long and short edges if I decide I want to.