Adventure games on the iPhone (they do exist!)

About a year ago I jumped on the iOS bandwagon with an iPod Touch. I was immediately struck by how difficult the App Store is to navigate. You really have to know what you’re looking for—or to put your blind faith in the best-selling rankings that display more popular games higher up on the list. The App Store does have an Adventure category, but so many games are miscategorized, it’s not very helpful. So I started writing a series of Eye on iPhone articles for Adventure Gamers to help people find these hidden gems (and, on occasion, buried turds). 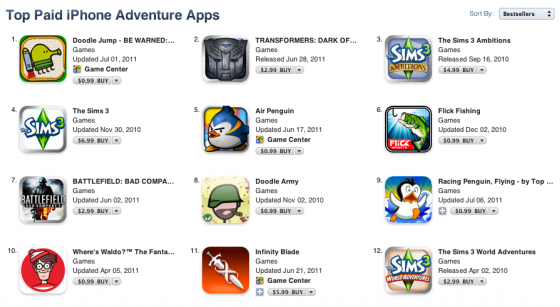 I see Waldo! But do you see any adventure games?

The fourth Eye on iPhone article went up today. (And since I neglected to post a blog about the one before this when it went up in May, here you go.) One of the games I looked at this time was The 7th Guest, which was a favorite of mine as a kid and incredibly fun to replay on my iPod Touch. (If you’d told me in 1994 that I would someday be playing that game on a handheld device the size of a playing card, and then publishing an article about it on a futuristic publishing platform named the in-ter-net, I might have experienced an existential dilemma.)

In the past year I’ve checked out a good two dozen (real!) adventure games on my iPod Touch; of these, only a few have even graced the best-selling list. Adventure games are in a better place than they were a decade ago (thanks, Old Man Murray), but it’s still a less popular genre than, say, action games. Visibility and sales go hand in hand on the App Store—when people see a game on the list and buy it, this bumps the game higher up on the list, causing more people to see it and buy it. This means the smaller relative size of the adventure genre could work to shoppers’ and developers’ advantage, if the section were actually restricted to adventure games.

But with all sorts of random games categorized as adventures, it’s practically impossible for the quality adventure games that are coming to the App Store to get recognition. Obviously a game needs to sell well to rank on the best-selling list, but why should the sales of adventure games like The Secret of Monkey Island and Puzzle Agent and Broken Sword and Scarlett and the Spark of Life have to compete against the sales of an arcade game like Doodle Jump or an action game like Infinity Blade or a sim like, um, The Sims to rank in the adventure section? It doesn’t make sense.

On a sort-of-but-not-quite-related note, I recently got a PlayStation 3. It’s my first time owning a console (not counting the Nintendo DS) and it’s opened up a whole new world. And, yes, there are adventure games available for it, too! I’ll post about that at some point. Right now I’m too caught up in L.A. Noire…

Furniture and built-ins for the Rosedale