One of the first components I splurged on for this house was a Bespaq Newport double door for a whopping $34. Not entirely sure what my color scheme would be, I got the white one, thinking I could paint it. But then I realized the door wouldn’t easily come apart — unlike a Houseworks door, the pin hinges are hidden (no way to pull them out and remove the doors from the frame), plus the windows (which are real glass) don’t slide out. The idea of painting it gave me a conniption. So I splurged again and got the wood version… which I also wasn’t entirely happy with. It just seemed too dark and put the house off balance. 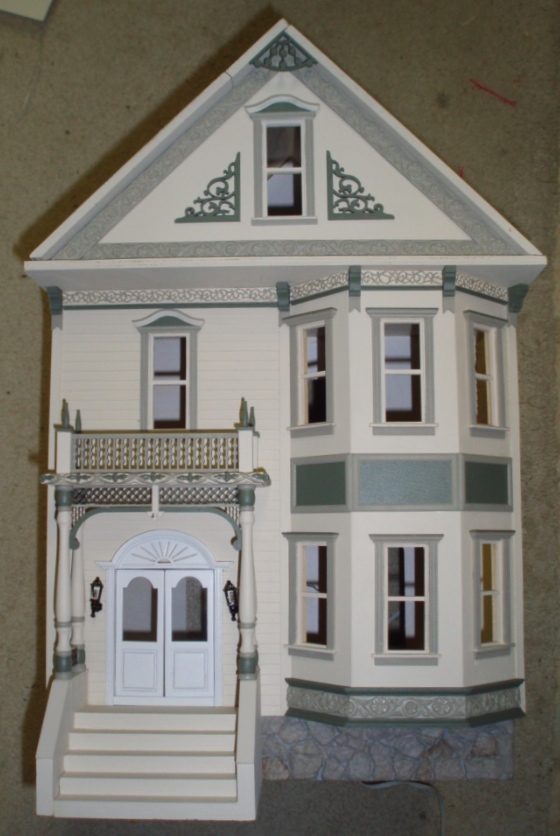 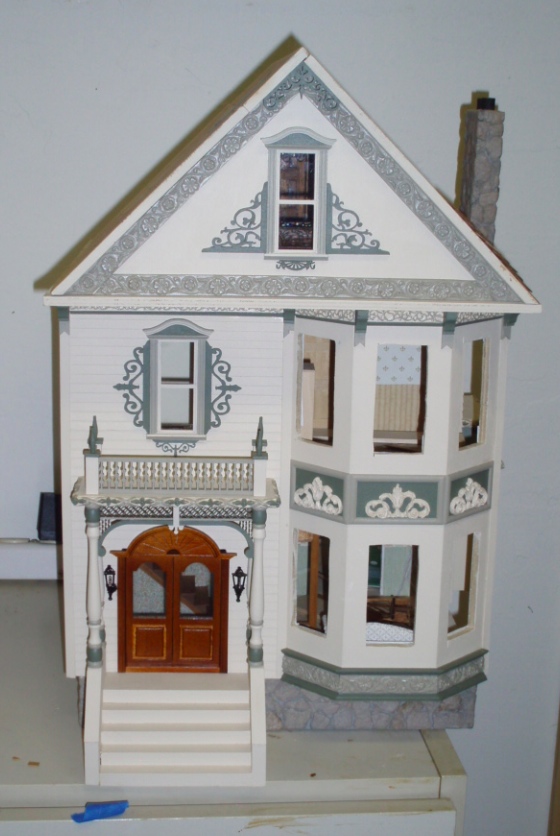 I recently checked out In the Victorian Style again from the library to get some ideas for my fireplaces, and while I was flipping through it I saw a picture of a San Francisco Victorian that had a stained door and realized what the problem was. I needed a trim that would match the windows etc., but a stained door. (I’d actually thought of this already — combining the two doors together somehow — but seeing the picture in the book confirmed it.)

Lucky for me, when I ordered my stained door it arrived in pieces. The manufacturer ultimately sent me a replacement, but this meant I had one that was already taken apart to play with. And it made me bolder about playing around, since I’d always have the whole one to fall back on if I needed to. These things are too expensive to mess around with! 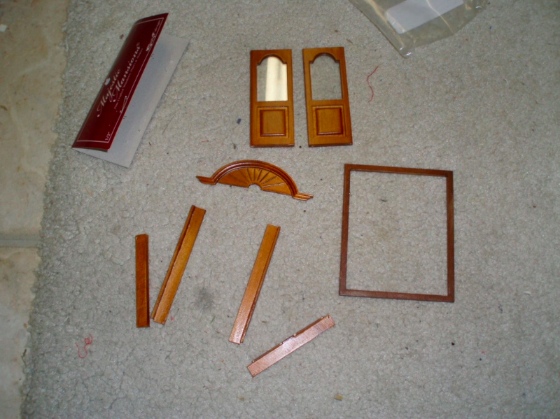 I’d already damaged my white door a little by stepping on it (oops) and it had some imperfections to begin with, so I didn’t feel too bad breaking it apart. Ideally I would have just painted the white frame, slipped in the stained doors, and been done with it. But the white door and the stained door weren’t the same dimensions. The stained doors were slightly taller and wider. I’m not sure if they came from different batches or what, but it made this a more complicated project.

Here are the pieces I came up with. 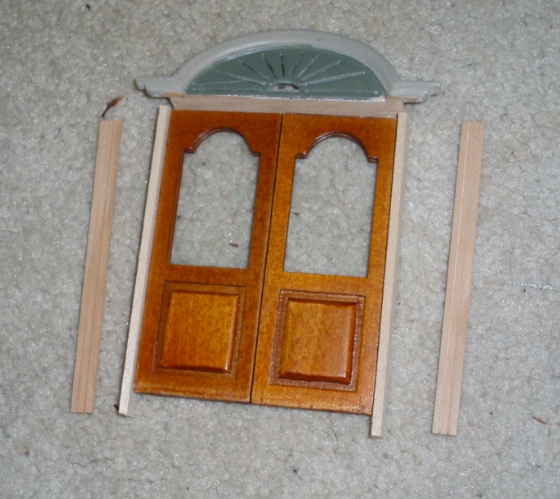 The sunburst header off the white doors had a fairly thick piece of wood at the bottom of it, which made the hole too short for the stained doors to fit into. I sanded off quite a bit of this, both on the bottom side and on the top side. This had the added benefit of getting the white paint off, so I was able to stain the part that forms the top of the door frame.

After giving it a lot of thought (like, sitting and staring at the door hole for *hours*) I decided that pin hinging wouldn’t work because the top piece didn’t quite extend the width of the two doors, and the bottom is currently a gaping hole (you’ll see it in later pictures). So, I decided instead to hinge it like a real door. I don’t think these are half scale hinges but they’re what I had, and looking at my own front door for reference, they didn’t seem too large. I attached each hinge with super glue, moving the hinge while the glue dried to keep it from getting stuck, and then pushed brads into the nail holes. 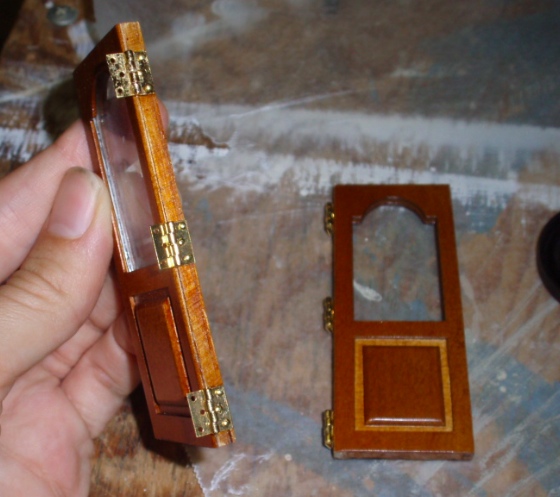 Rather than try to hinge the door directly to the house, I attached the other side of the hinges to a piece of strip wood to be glued to the inside surface of the door hole. (Note that this is not the same strip wood shown in the picture above that shows the various door pieces. I realized after I glued on the hinges that I’d underestimated their bulk, so I had to go with the skinniest strip wood I could find.) I super glued the hinges to the strip wood but didn’t add the brads yet, since they were longer than the depth of the wood and would have stuck out the back. 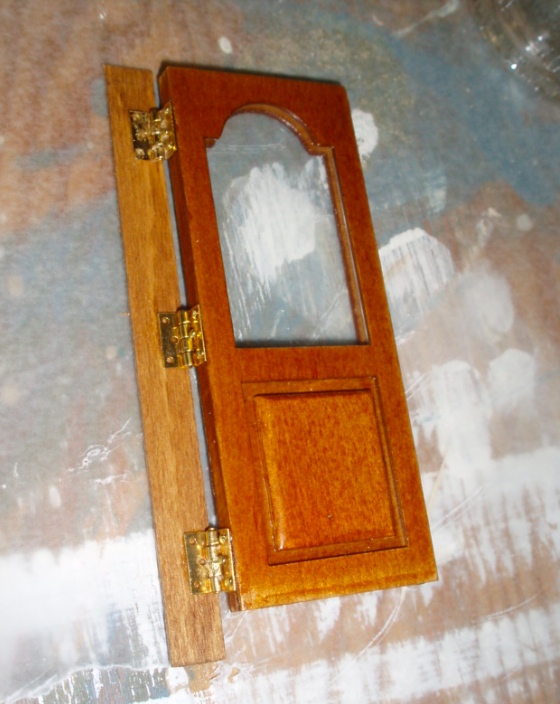 Next I glued in one of the doors. I started with the left door, for two reasons. One, it’s the “passive” door (can’t think of a better way to describe it – the one you don’t open most of the time), so I figured it would be better to practice on than the “active” door. And two, the light fixture on this side is closer to the hole than on the other side. Even with my skinnier strip wood, I knew I’d need to do a bit of sanding to get both doors to fit in the hole, so I needed to do the side where I actually had room to sand second. 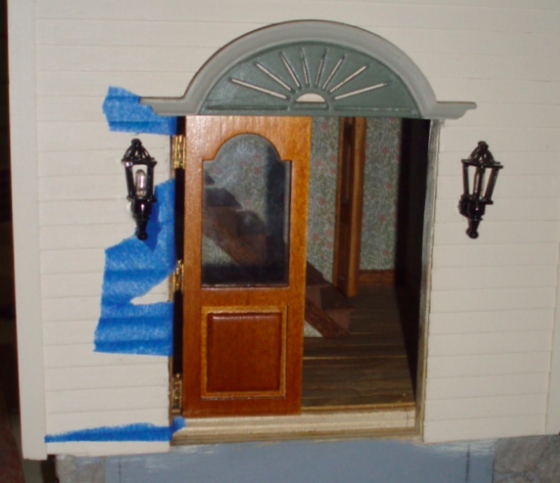 While the glue was drying, I added a handle to the “active” door. I wanted something fancier than a plain old doorknob, but the pickings are slim in half scale. Ideally I was looking for this sort of handle. Here’s the closest thing I could find that seemed like it would be in scale. 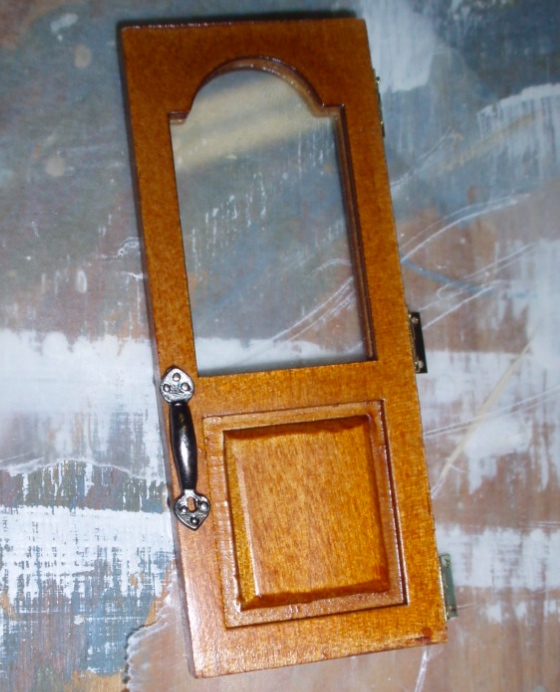 Not a great pic, but here’s how it looks from the side.

The keyhole at the bottom seemed odd to me, so I snipped it off and put it above the handle like a deadbolt. 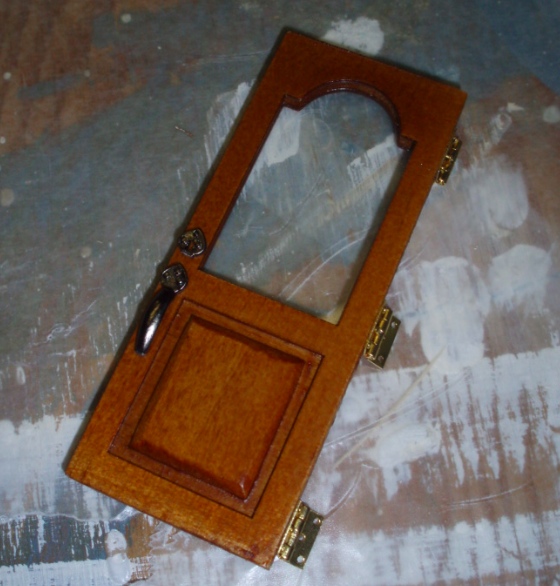 Before gluing it on, I added a dab of black paint so the wood wouldn’t show through the keyhole. 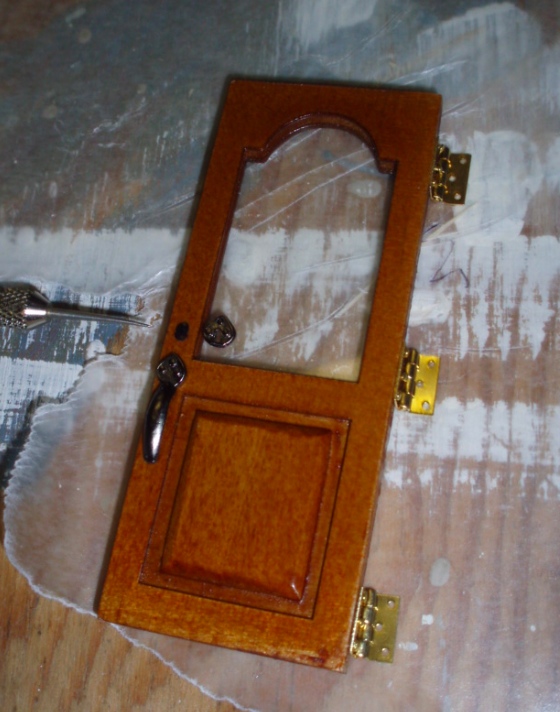 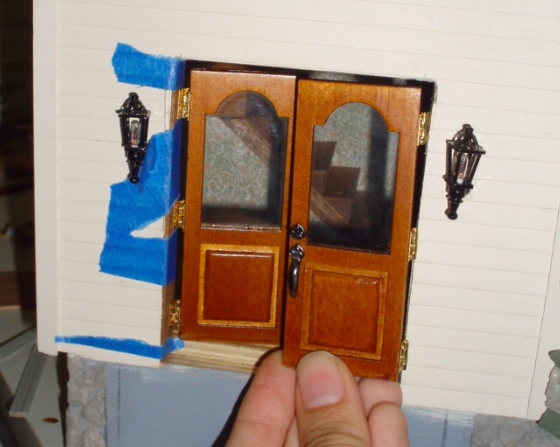 For the inside, I used a keyplate that might have come with a House of Miniatures furniture kit, I’m not sure. 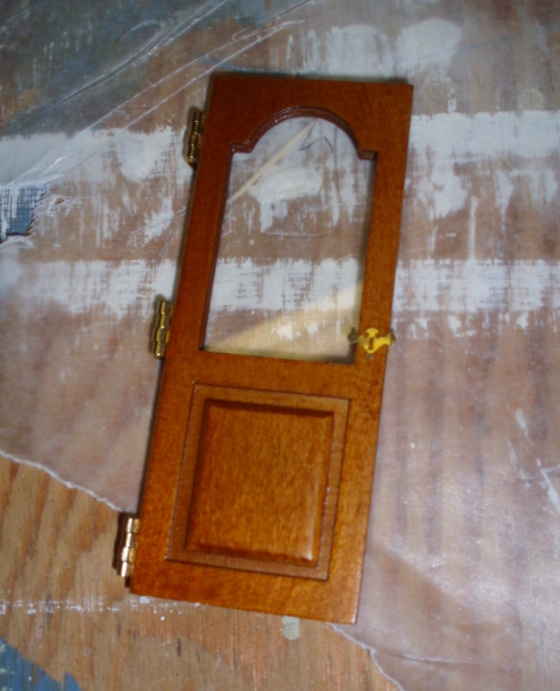 I had to cut the edges off to make it fit on the door. For the knob I used a regular half scale doorknob. 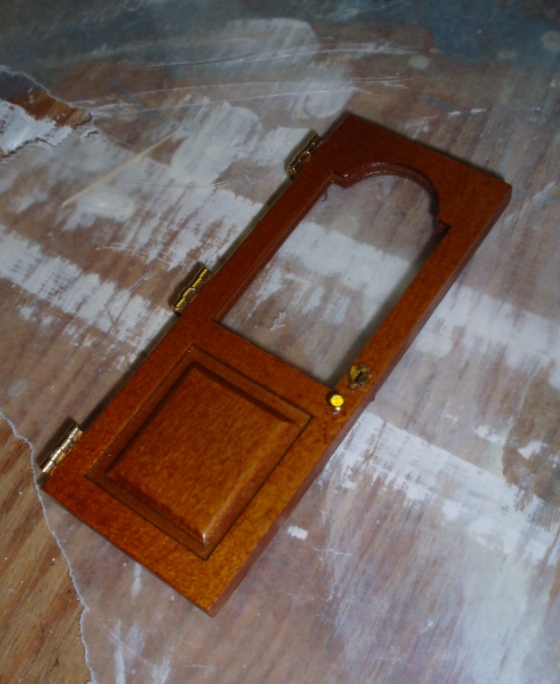 By now the glue had dried (more or less) on the first door, so it was time to add the nails to the hinges. I turned the house on its side, poked holes through the hinge holes with the pointy electricity tool (forget what that thing’s called…) and used my needlenose pliers like tweezers to get the brads into the holes. (I would have used actual tweezers but couldn’t find them. My work room is a mess!) Once the brad was standing up in the hole I pushed it in with a piece of scrap wood and a flat screwdriver head. It took a little messing around but on the whole this was easier to do than I expected. 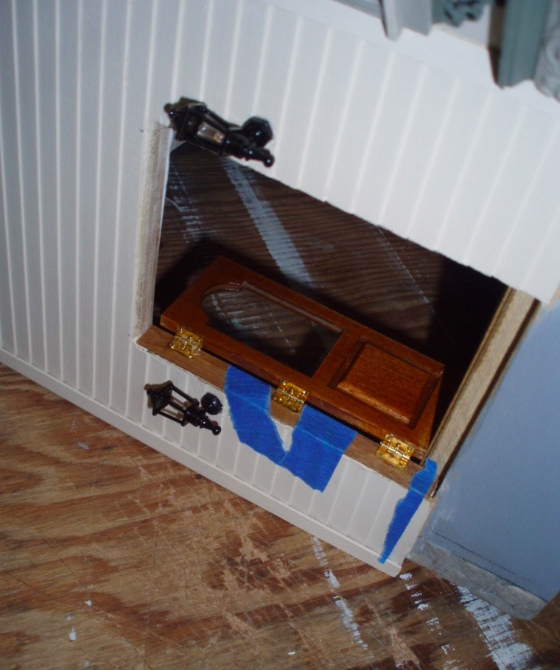 With the first door finished, I held the second one up to see how far off my hole was. It was off by about a sixteenth of an inch, which doesn’t seem like much until you start sanding the plywood by hand… 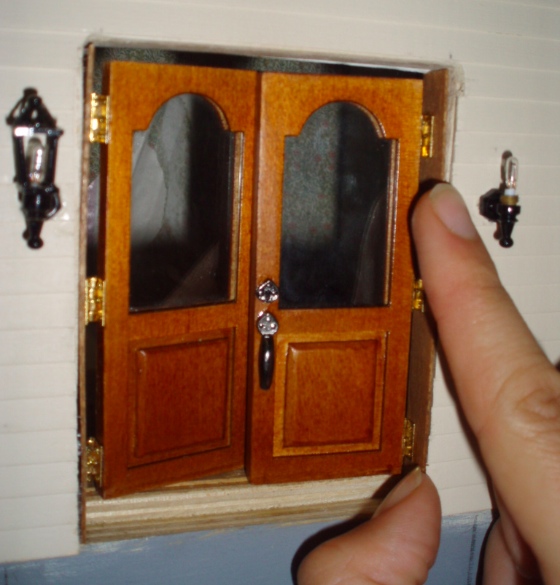 …a process that created a lot of sawdust! 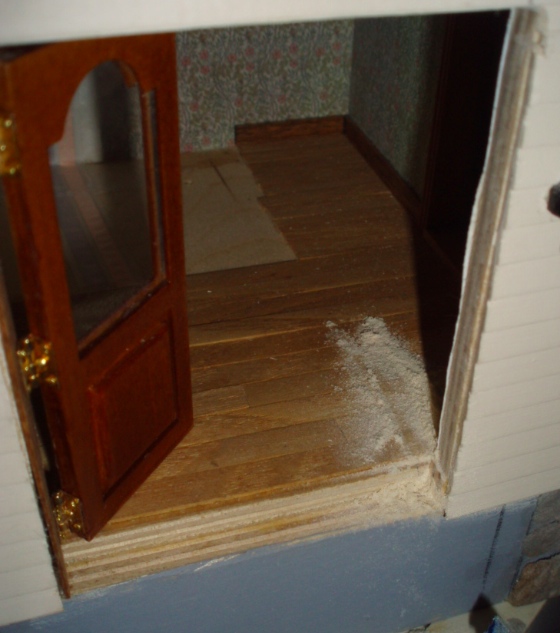 I sanded the hole, alternating between a file and sandpaper wrapped around a piece of wood, for what seemed like an incredibly long time. After a lot of futzing I got it so the two doors hung and swung nicely. But after I finished adding brads to the hinges on the right-hand door, the fit was pretty tight, and I have no idea why. It might be that once the nails went in the doors weren’t in quite the same place anymore as when I glued them. But they look fine and they do open, so I’m not going to mess around with them anymore.

(I also broke the light on the left while I was doing all this but it still works and I think I managed to glue it back together in a way that will hold up.) 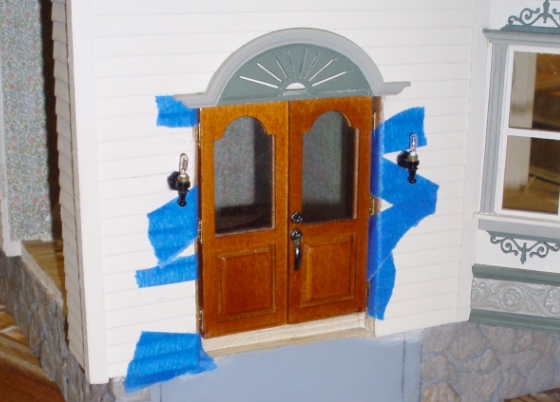 Here’s how it’ll look with trim. You can see the gaping hole under the doors in this picture. I plan to fill it in with strip wood painted the color of the house. 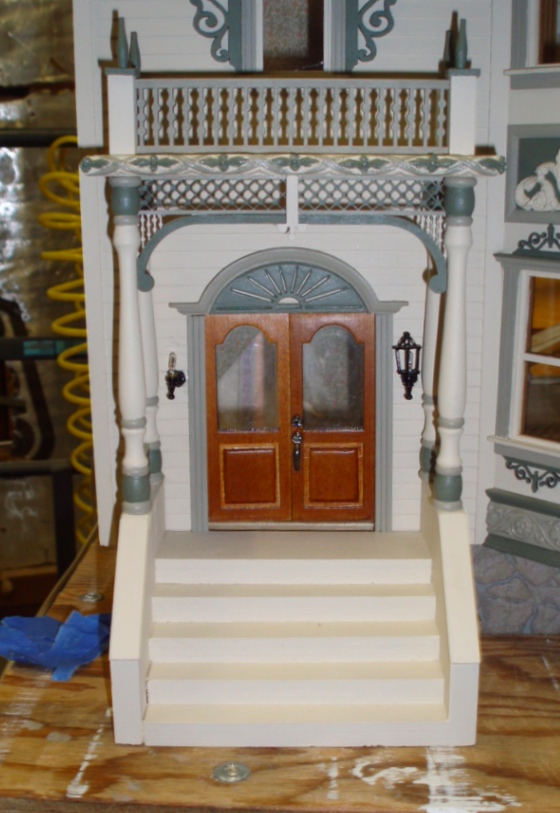 I added a piece of strip wood (not painted yet) to the edge of the trim to hide the gap caused by the hinges. 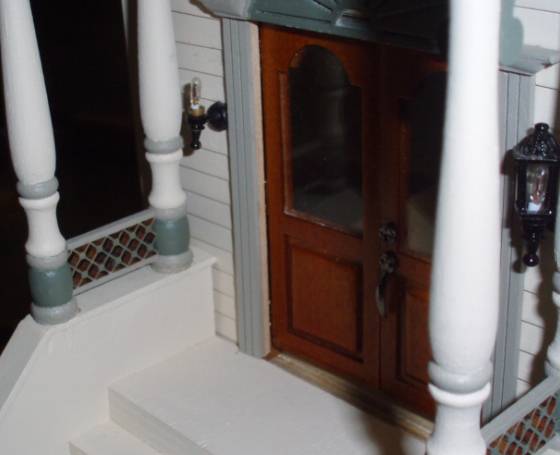 And here’s how it looks on the inside. I’ll use the trim off the broken door in here. 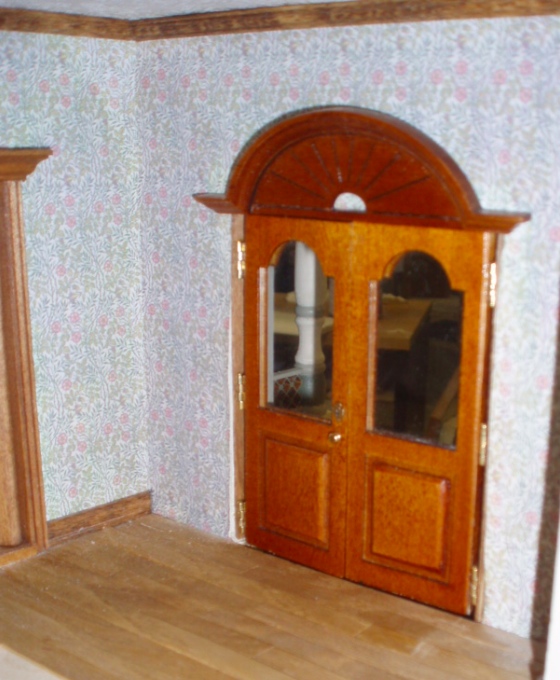