The rowhouse kitchen has been mostly done for a couple of months. Today it’s *almost* mostly done — all that’s left is the sink! (As a reminder, this kitchen is a bashed SDK Miniatures modern kitchen kit. My earlier kitchen posts are here, here, here, and here.)

My recent progress started with gluing in the window and trim and finishing the backsplash. I added stained trim around the edges. On the side I decided to extend this all the way to the floor just to be sure you wouldn’t be able to glimpse an unfinished edge from any angle. 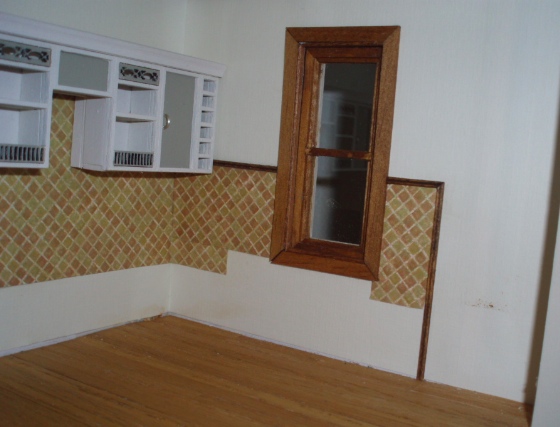 Here’s how it looks from the open wall. 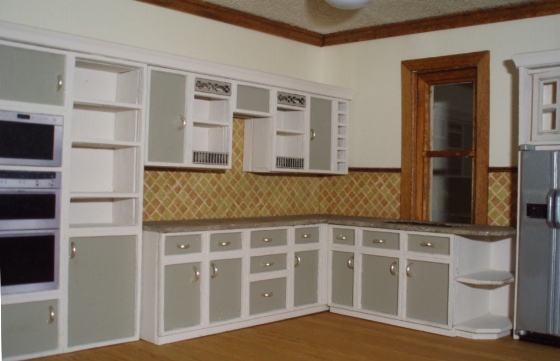 Through the bay window, you can see the edge of the backsplash. I was going back and forth about whether to finish it like this or extend it all the way behind the fridge. In the end I chose this since, if it were extended, you’d be able to see the bottom of the tiles on the tiny bit of wall visible between the cabinets and the fridge. Seeing the bottom edge of a backsplash floating in midair just seemed odd to me. 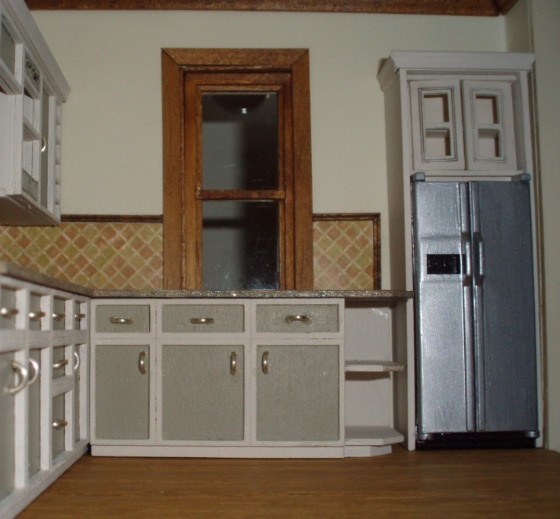 On to the range hood. Last weekend at Michaels I picked up two items in the cake decorating aisle that I thought could work. 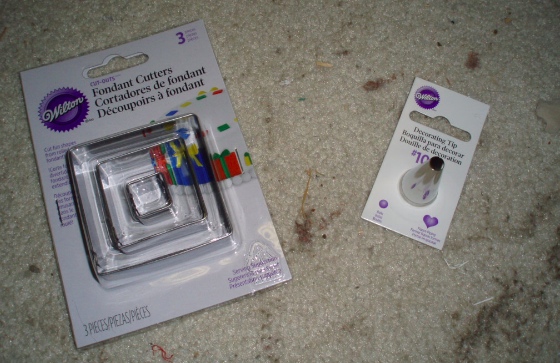 Initially, I thought the frosting bag tip would win out, but it looked a little strange. 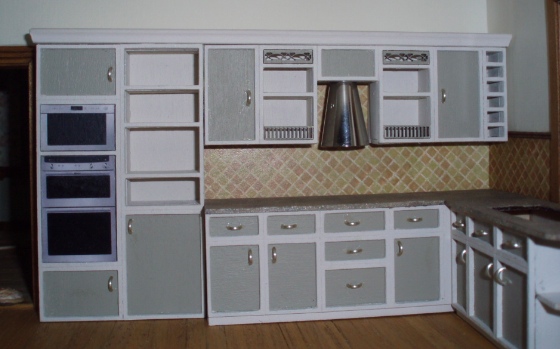 But the small fondant cutter turned out to be perfect! (Temporarily held to the wall with putty in this pic…) 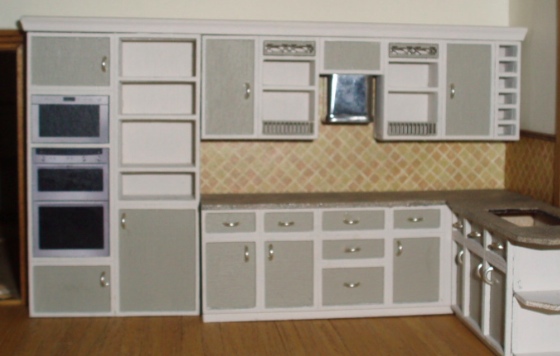 Next task was to finish the cabinet over the fridge. A few weeks ago I bought two sets of Linden Swiss glasses to glue into the cabinet — these rounded ones and a set of four martini glasses.

(You’ll notice the cabinet doors are green in this picture — I briefly thought I wanted that. But then I changed my mind and repainted them with the Tuscan Beige. I’m fickle that way.) 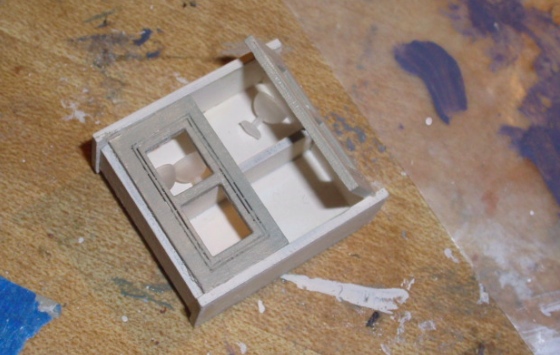 And here’s the finished cabinet. This cabinet is a cardstock kit from Petite Properties and while I like the idea of the etched decorative lines, I didn’t like how they took paint unevenly. I went over them several times but was never really happy with the result. Oh well.

In this picture I’ve added plastic to the insides of the doors, and pulls. The left one is a little crooked and I fixed that later (well, actually, it fell off so I had no choice but to fix it!) I might eventually glue the doors closed but for now I’ve left them open since I haven’t filled up the bottom shelf yet. 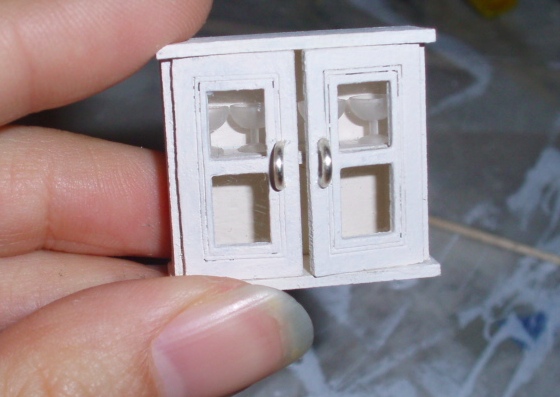 I glued the cabinet to the basswood on top of the fridge. 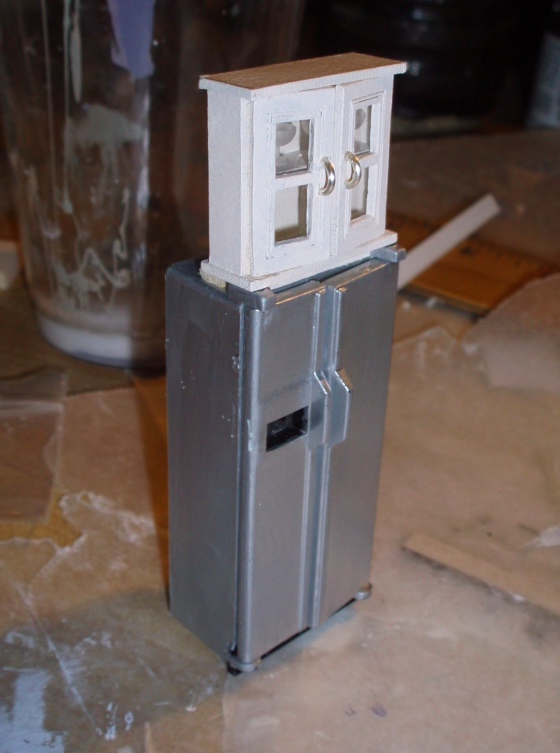 Ta da! The glasses are pretty subtle — maybe I should have painted the inside of the cabinet green so they would stand out more, but didn’t think of it until it was too late. But it’s one of those details I know is there, and makes me happy. 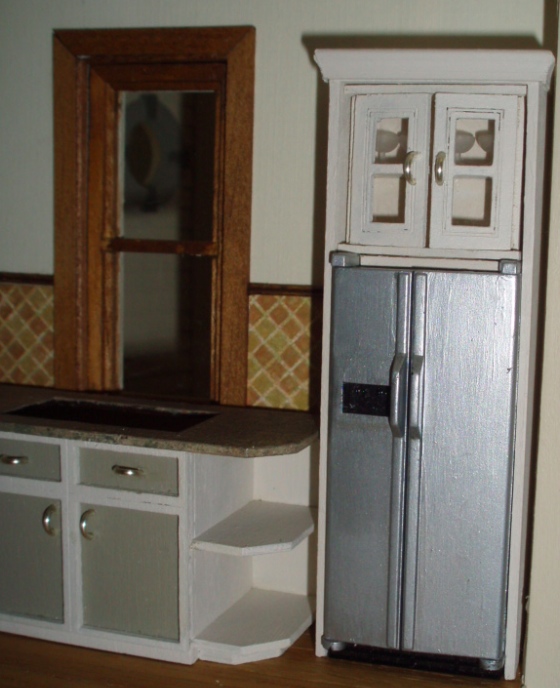 The martini glasses turned out to be too short for the cabinet over the fridge (on the bottom shelf, you could barely see them) so I decided to put those on one of the wall cabinet shelves instead. The two pitchers are not glued in, I’m not sure if I’ll keep those there or not.

I thought I took before/after pictures of the purple mugs but the camera seems to have eaten them. These were originally spatterware cups that came with a pitcher I bought for my Little House cabin. Spatterware was way too old-school for this modern kitchen, so I painted them. 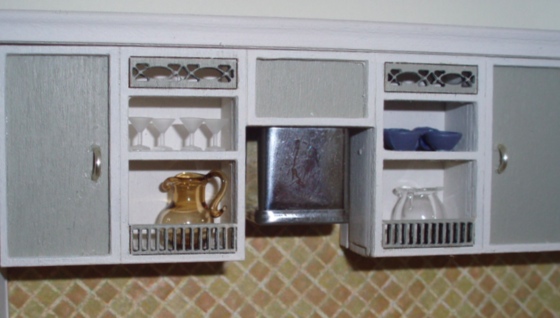 Finally I tackled the stovetop. The kit came with a printie but I didn’t like it. I was going to print something out myself, but I everything I tried looked tiny when I reduced it to the 1″ width I had to play with. Plus I wanted the stovetop to have some height, not just be a flat printie. (The lady of the house wants a gas stove, not electric!)

A few years ago a Ben Franklin craft store nearby went out of business and I bought a sheet of aluminum embossing paper on clearance. I cut a piece of this 1″ wide and wrapped it over the front and back of the counter. I had some lock washer “burners” left over from the Rosedale kitchen. Everything’s just sitting in place in this picture, nothing glued yet. 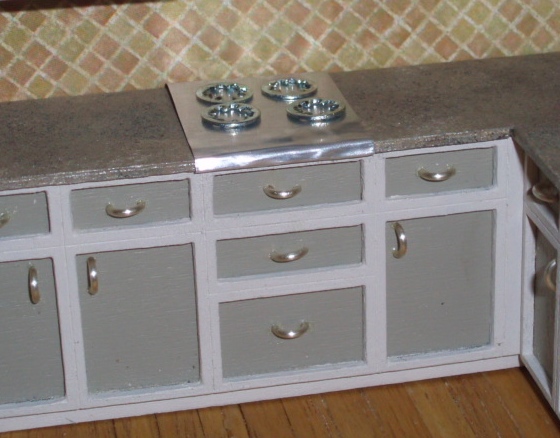 Since the stovetop is “stainless,” I painted the lock washers black for contrast. 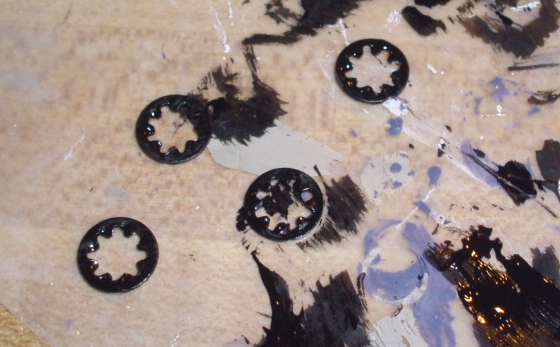 I glued on seed beads for knobs. I didn’t have any black ones, but the Wolf ranges I’ve seen always seem to have red knobs…

Now to attach the stove hood. This was tricky because the fondant cutter was wider than the opening for the hood (unlike the frosting bag tip, which I could have wedged into that opening). My first idea was to glue a piece of wood to the inside edge of the hood. 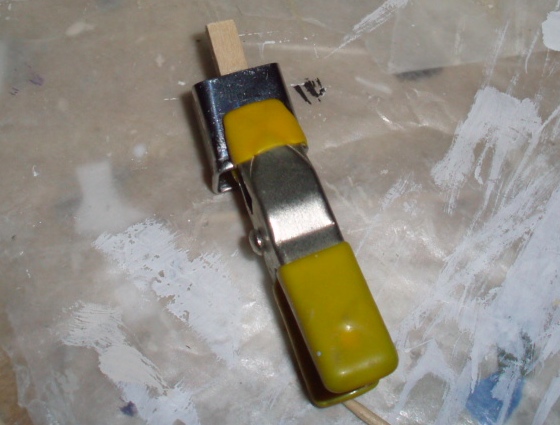 And then glue the top part of the wood to the inner edge of the opening. But this was a disaster. I didn’t have the leverage to get a good bond and in this position the back of the hood was slightly farther back than the back of the cabinets, so when I put the (still drying assembly) against the wall, the wall pushed the hood forward and it fell off. 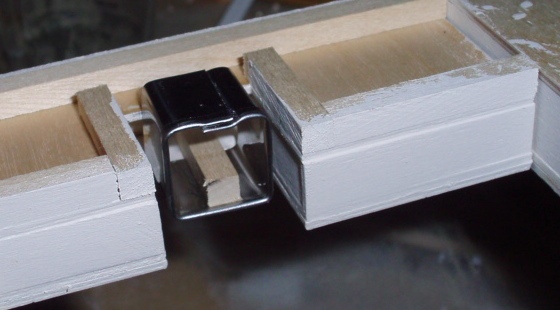 Then I remembered that the kit came with a piece to fill this hole — I’d left it off because I wasn’t sure what I would be doing for a stove hood. I found it and glued it in. 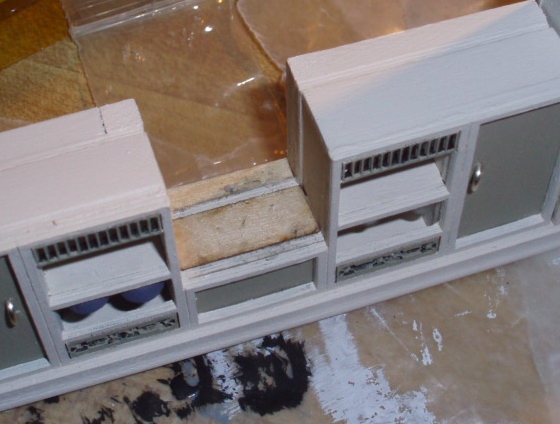 I quickly painted that piece Tuscan Beige to match the cabinets. While it was drying I glued a piece of wood to the inside of the hood, that could provide a surface for gluing. 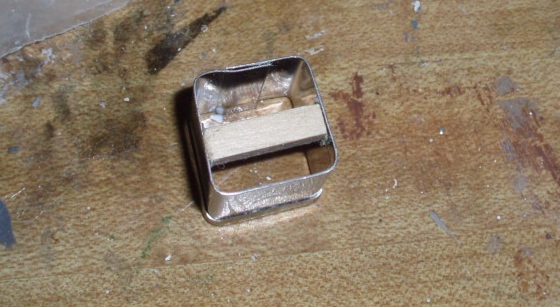 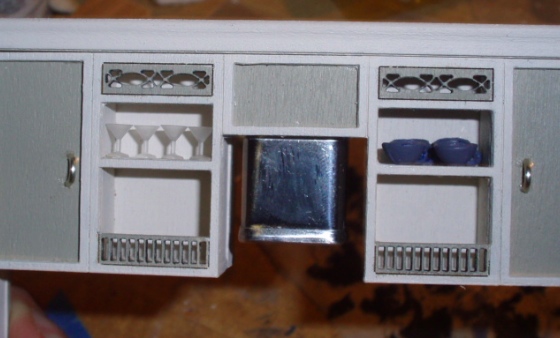 And with that, the rowhouse kitchen is almost complete. All that’s left at this point is to finish the sink, which is just sitting in place right now. 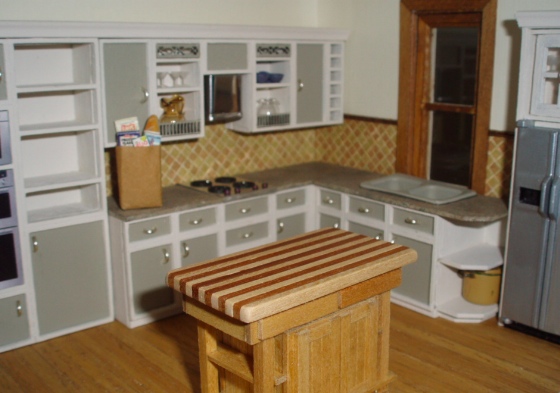 I’m happy with how the stove turned out. It looks a lot more real to me than a printie would have. 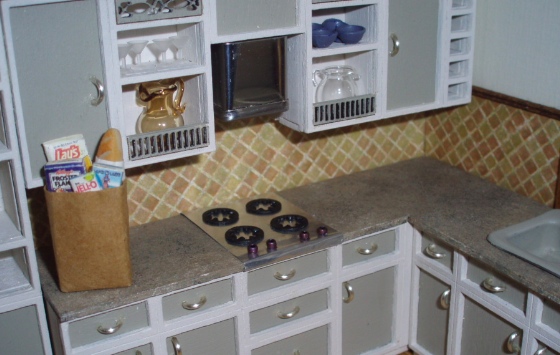 I’m not exactly sure what I’ll do on the other side of the room. It needs a dining table of some sort and I’ve tried out a few, but so far haven’t found the perfect one. The bay window might have a buffet like this, or seating (I built a Cassidy Creations settee that fits in there). 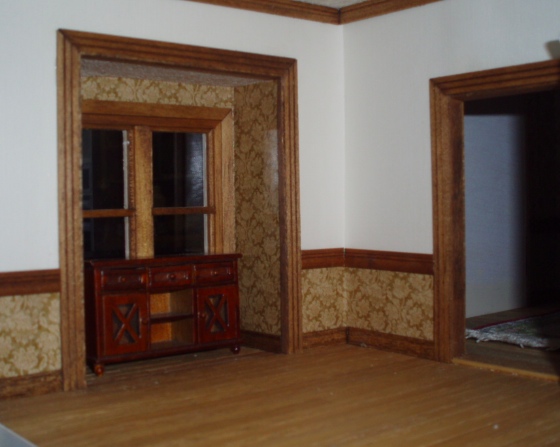 Here’s the whole room as it looks right now. 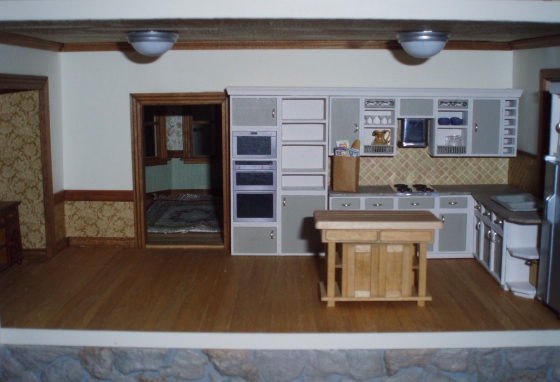