When I built the Rosedale, I planned to make the smaller room on the first floor into a laundry room, but when I pulled out the house at the beginning of this year to do the finishing touches, I decided to turn it into a home office instead. I’d originally intended to have two bathrooms upstairs but realized the one on the third floor (adjoining the master bedroom) was too small and strangely shaped to work out, so I’m going to put the laundry in there instead.

There’s not really a lot of selection when it comes to half scale office furniture (or, let’s be honest, half scale *anything*), so I got creative. I used the leftover top cabinet pieces from my Rowhouse kitchen bash to make an L-shaped desk. First I cut the smaller piece to fit under the window. 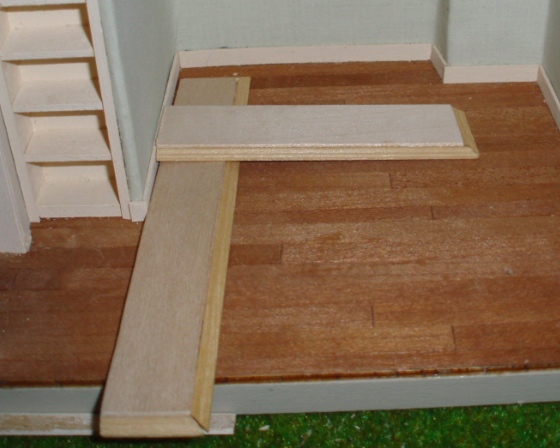 I measured the larger piece to fit along the other wall and cut the edge that meets the smaller piece at a 45-degree angle. Since the two pieces are not the same depth, they don’t meet up exactly in the back corner. 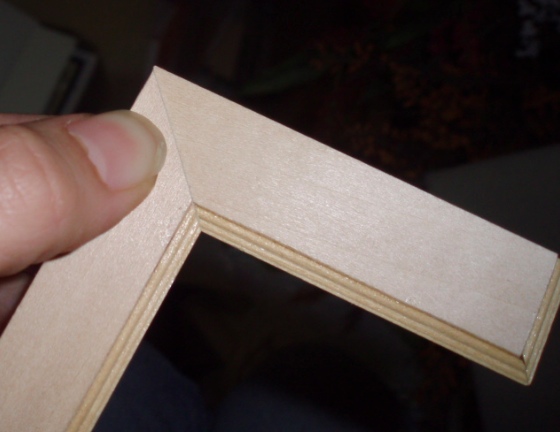 With the pieces overlapped, I drew a line on the short piece so I’d know where to cut. 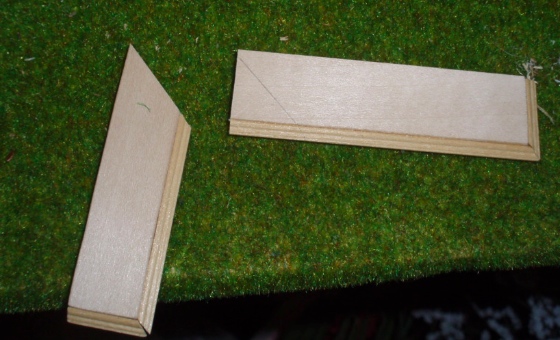 I glued the two desktop pieces together and made sure they fit, since my walls aren’t exactly square. 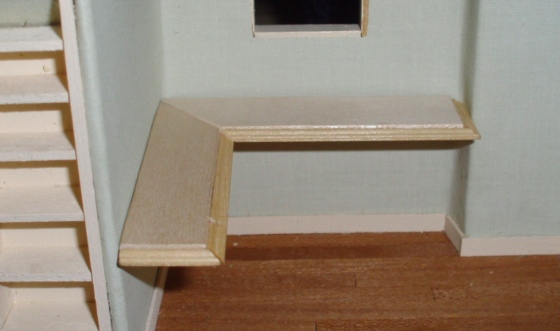 For legs, I cut down 1:12 porch spindles. I didn’t have a chair yet (I ordered that later…), so I was guessing on the height. I checked an IKEA catalog for desk height dimensions and used a segment of the spindles that was about the right height. 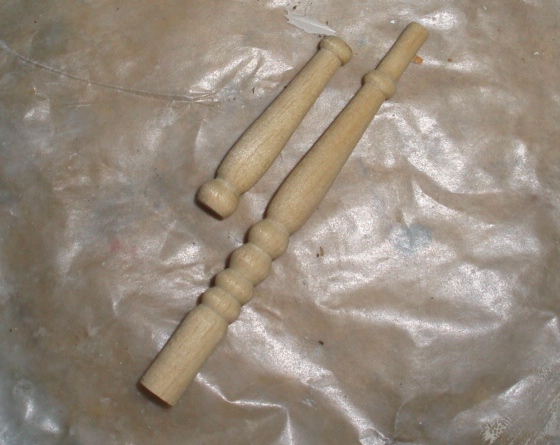 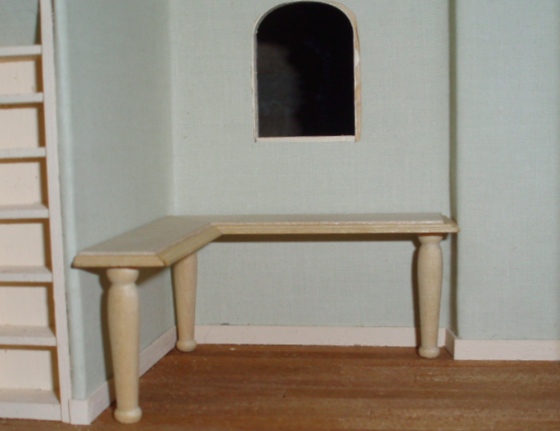 With the legs glued on, I painted the desk dark blue and set it aside until the chair showed up. The chair’s on the short side, and my desk turned out to be much too tall. 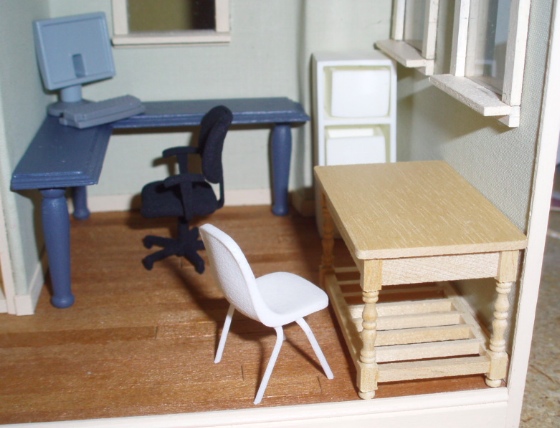 I thought I could fix this by adding a keyboard drawer. The desk would still be tall, but at least the chair would be more in line with where the mini person’s hands need to be. 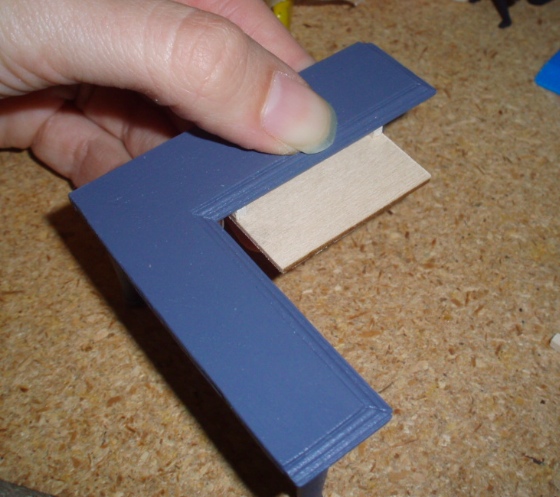 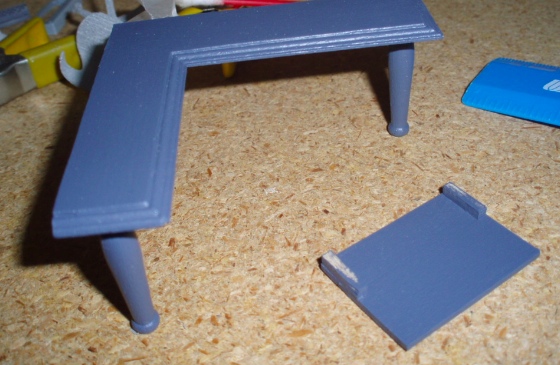 Good news: this helped (but not quite enough). Bad news: adding a keyboard drawer meant I needed to cut apart the Playmobil keyboard and monitor I was planning to use. I did this without incident and then went to sand the cut edge of the keyboard with the disc sander. When I was finished, I left the keyboard next to the sander while I turned it off, and it got sucked into the crack between the sander and the little platform you hold stuff on during sanding. Of course, it got all chewed up. Bah. 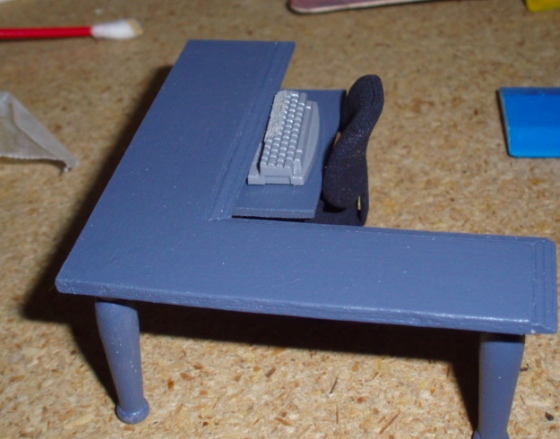 Frustrated by this, and feeling that the desk was still too high, I hacked off the bottoms of the legs and immediately regretted it. Without the balls at the bottom the legs just didn’t have the same elegance. 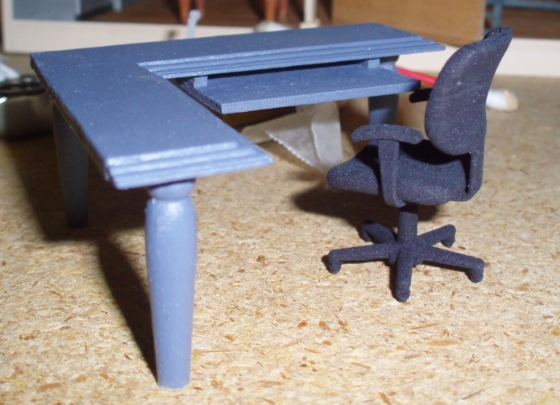 Luckily I had more spindles — and because I rarely work in 1:12, I didn’t feel guilty using them up. I cut three new ones, keeping the foot at the bottom but omitting the ball at the top. 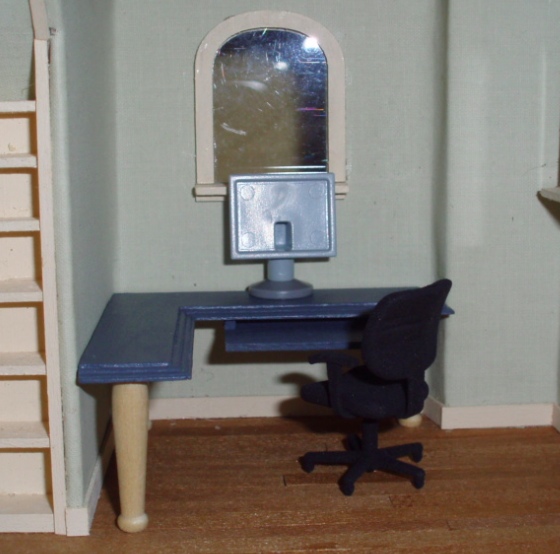 I then glued on and painted the new legs, along with a little shelving unit that I recently bought off Etsy and looks like something you’d buy at IKEA… 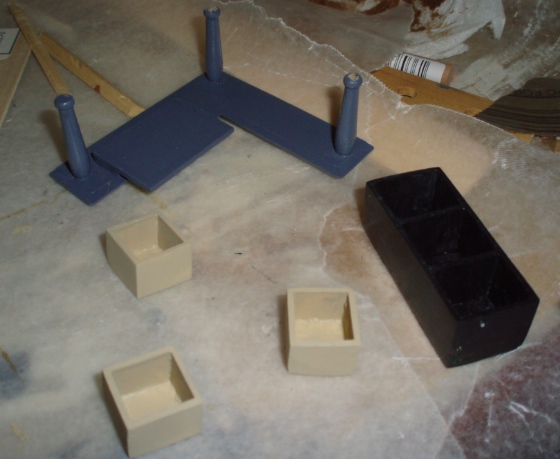 I still need to make a new keyboard, add a screen to the monitor, and scatter the requisite clutter around the office. I’m not sure if I’ll keep that table under the windows or not. It seems to take up a lot more space than it did when this was a laundry room… 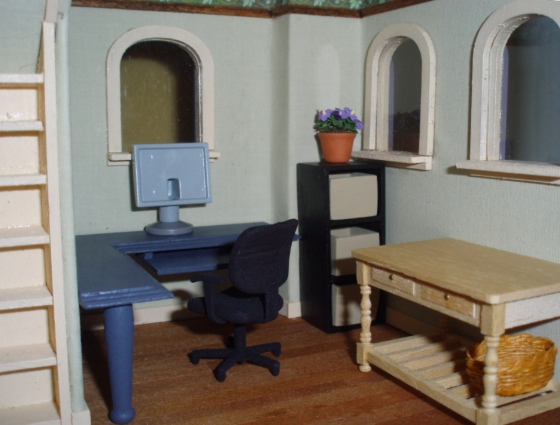 3D printed furniture in half scale, from Pretty Small Things and Shapeways