Working my way through the Tomy Smaller Homes revamp, the next room I tackled was the kitchen. I bought the kitchen furniture second-hand off eBay and it was kind of grimy, so I started by washing the pieces with soap and water and putting them out in the sun to dry.

I had thought about painting over the yellow cabinets for a more realistic look, but it would have been a lot of work with potentially bad results, so I decided to embrace the yellow. I looked online for pictures of “mod kitchens” and got some good ideas. First off, I decided to make the white knobs silver, using my trusty silver Sharpie. 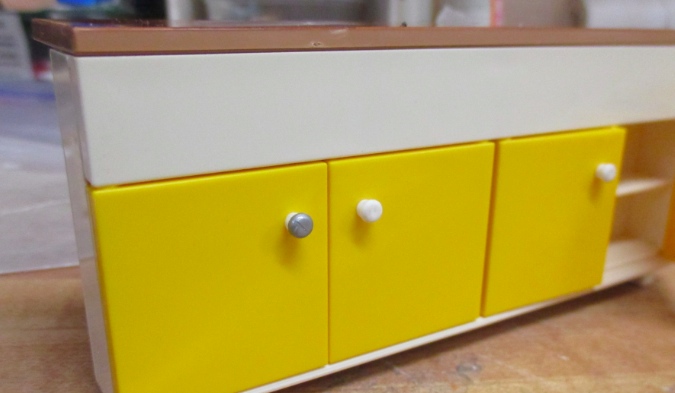 I colored over just the top part of each knob — not the handle, because it would have been too easy to get ink on the cabinets.

Then I did the same with the orange bar stools. 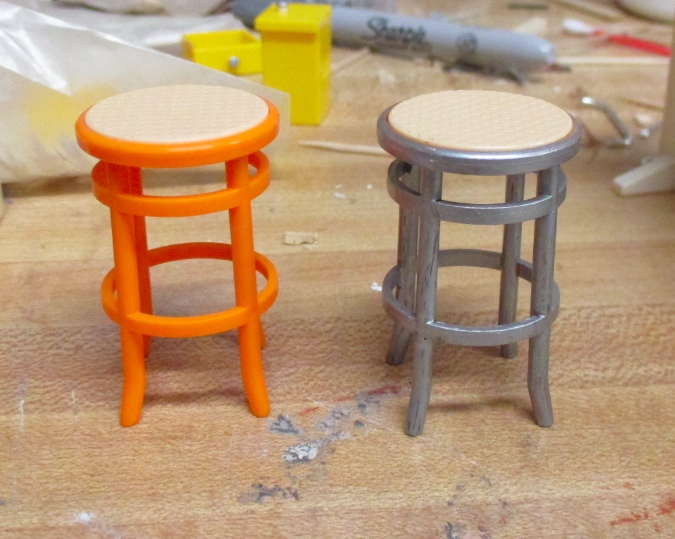 The finish isn’t perfect, but it’s neater than paint and appropriately metallic. 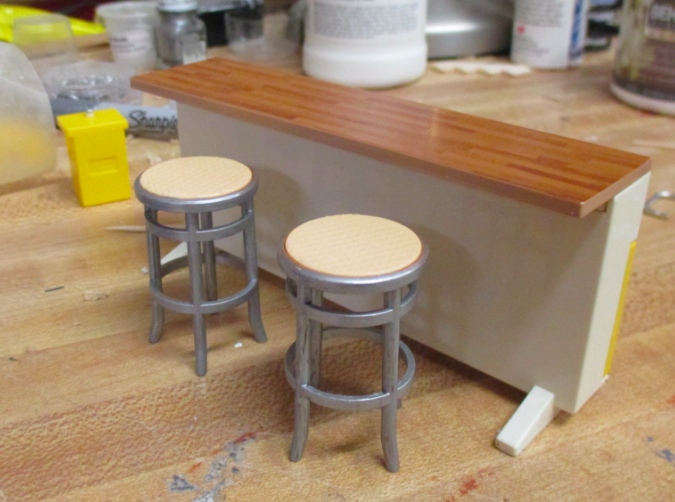 Next I glued some floating shelves to the walls. I got the idea from this picture I found online (original source: huffingtonpost.ca). Mine are made out of basswood, and painted a color close to the fridge color. I glued them on with spacers in between to make sure they were level. 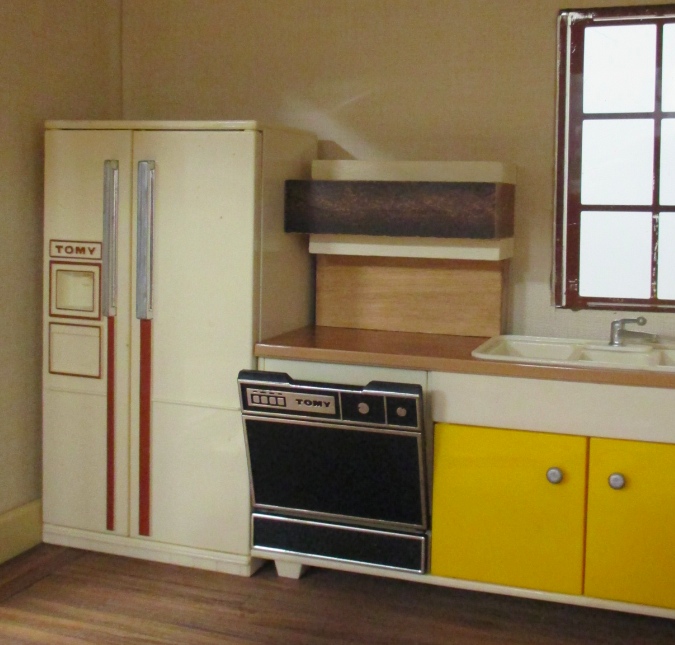 Because of the big window on this wall, I only had room for these two small shelves, but they’re enough for some dishware. These are an assortment of Chrysnbon plates and cups that I got at an estate sale. 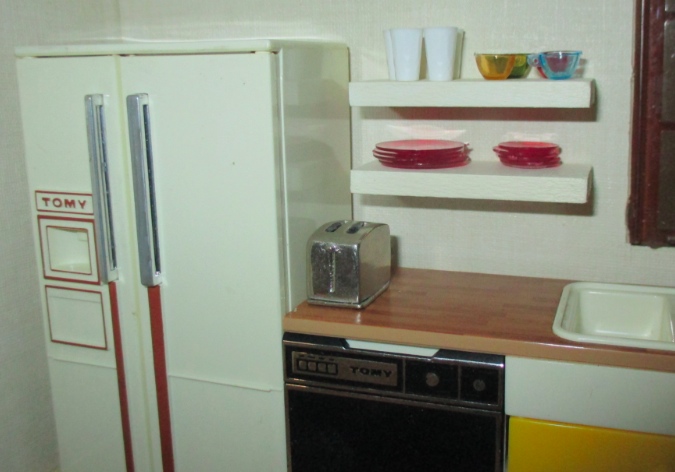 Next I added the support post to keep the ceiling from sagging. This is a 1:12 pillar that I bought years ago for this house intending to stain it… good thing I never got around to that! It’s the same style I used for the porch posts in the half scale Queen Anne Rowhouse. 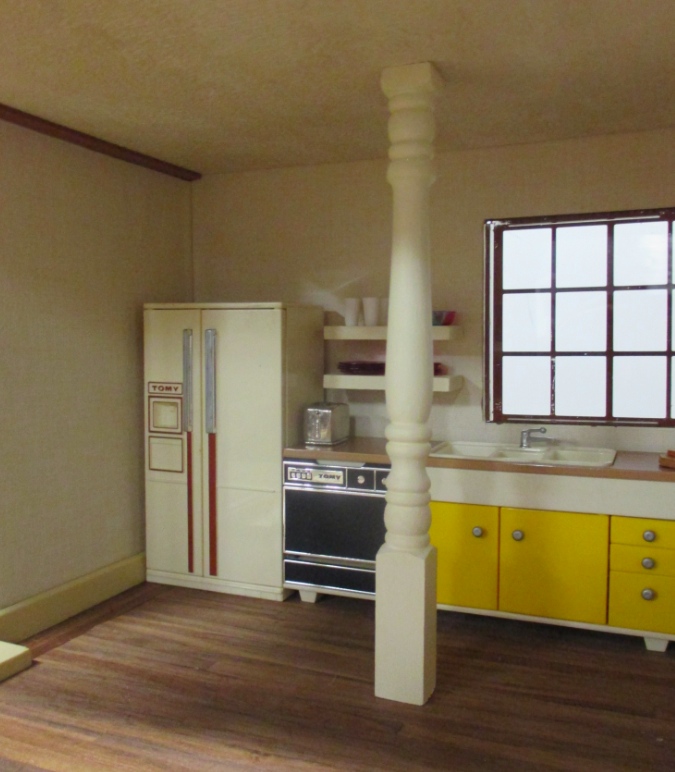 I was able to pick up a third stool at Peg Dollhouse’s in Santa Rosa when she had her annual open house last weekend. She only charged me a dollar for it! 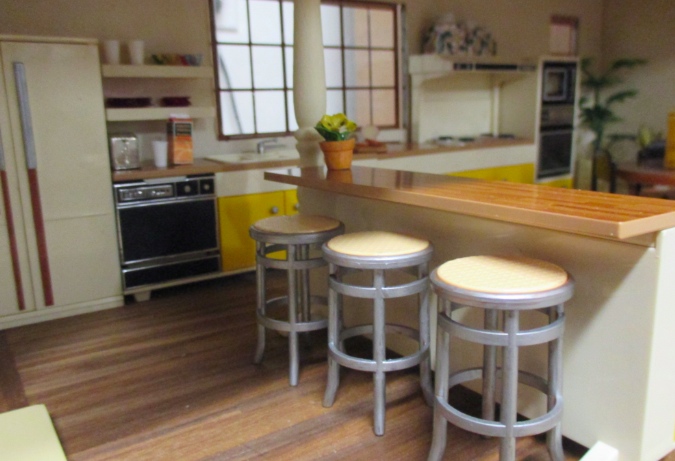 Moving through the kitchen, I added some accessories and a ceiling light. This was a working light that I pulled out of the McKinley before I got rid of it. The light still worked but I didn’t want to electrify this house, so I removed the bulb to reuse somewhere else. 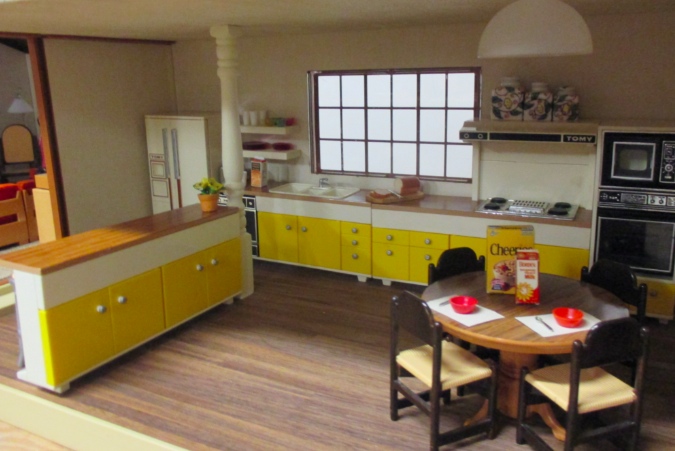 This is the Tomy table, but I painted the orange chairs brown with Testors. (There’s some orange showing through, needs a touch-up!) When I embarked on this kitchen revamp, I thought I should fully embrace the yellow and picked up this mod Fisher Price table to use instead. But when I started playing around with the furniture it looked small, so I reverted back to the Tomy table for now.

The placemats are cut from wallpaper scraps, and the spoons are the ones I found tucked inside the Tomy album cover when I finished the living room. I think the bowls came with my batch of Tomy stuff off eBay. 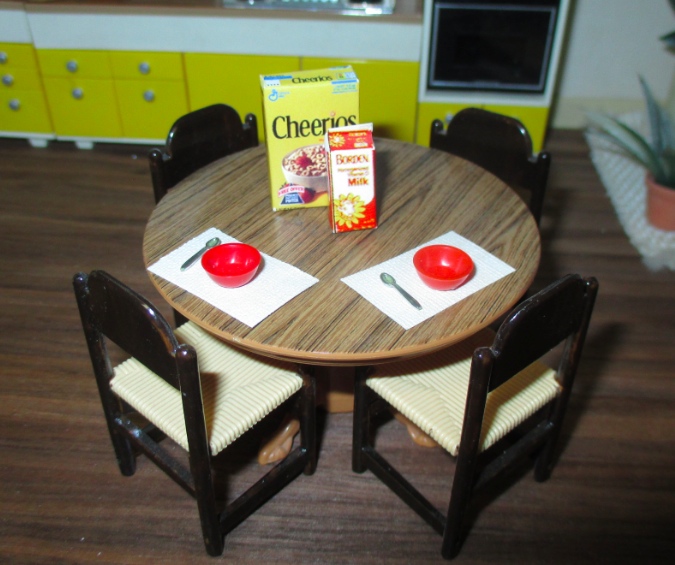 I bought a Tomy butcher block off eBay to complete the kitchen. It showed up in the box — note the Smaller Home and Garden logo, a ripoff of the early 1980s version of the Better Homes and Gardens magazine logo. Later runs of the Tomy pieces are named Smaller Homes, in all caps with a trademark symbol after it. I did some online poking and found that the trademark was registered in 1982 and canceled in 1988 (but by then I think this stuff was long out of production). 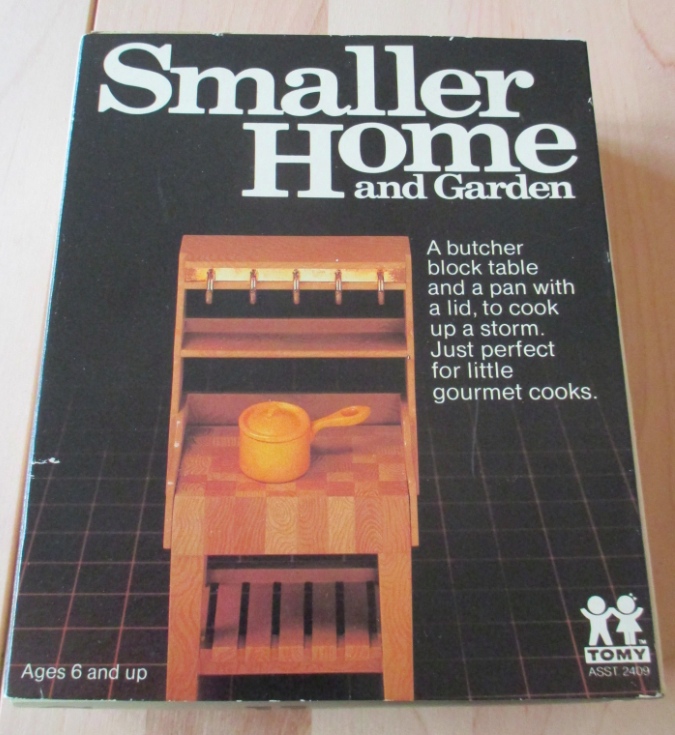 I also noticed that the photos on the boxes are not exactly the same as the furniture inside. Compare the butcher block image above to the real thing — in the photo the butcher block has a checkerboard pattern that extends down the front edge and the front legs have a distinct wood grain, but the real thing has a different design on the cutting surface and a less detailed, obviously plastic front edge and legs. 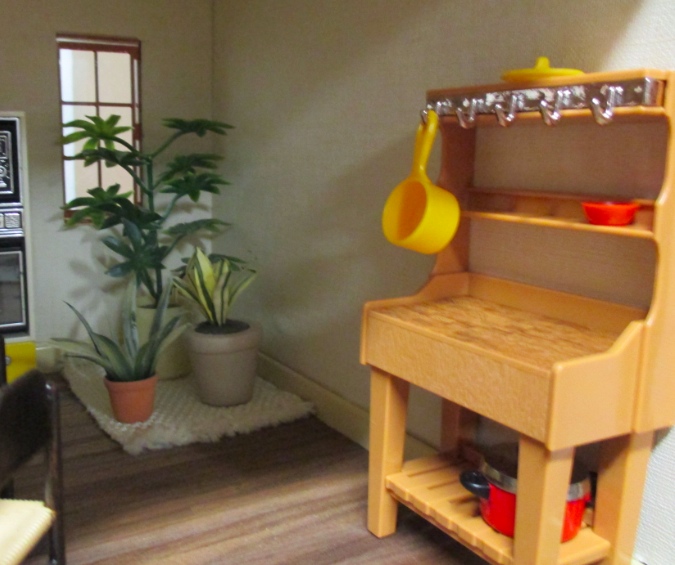 Also, on the cover of the Smaller Homes box I linked to above, the cabinet unit with the dishwasher has a white top drawer, but the real thing only has the three yellow drawers. I’ve noticed other subtle differences in pictures I’ve seen online. The photos are exactly the same regardless of whether it’s a Smaller Home and Garden logo or SMALLER HOMES™, so I doubt there are versions of the furniture out there that match the box photos. Maybe they were prototypes.

The differences between the photos and the real thing are especially interesting because the FTC made a complaint against Tomy for deceptive advertising after they aired a TV commercial for a “Deluxe Set” that either didn’t exist or wasn’t widely available.

But I digress. Here’s the finished kitchen, in all its yellow glory! 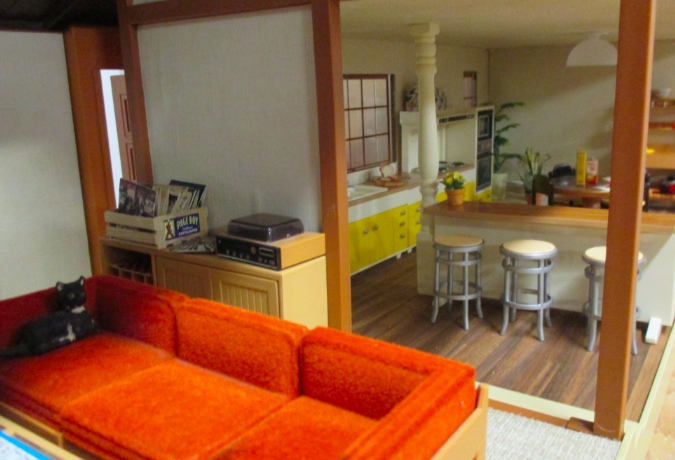 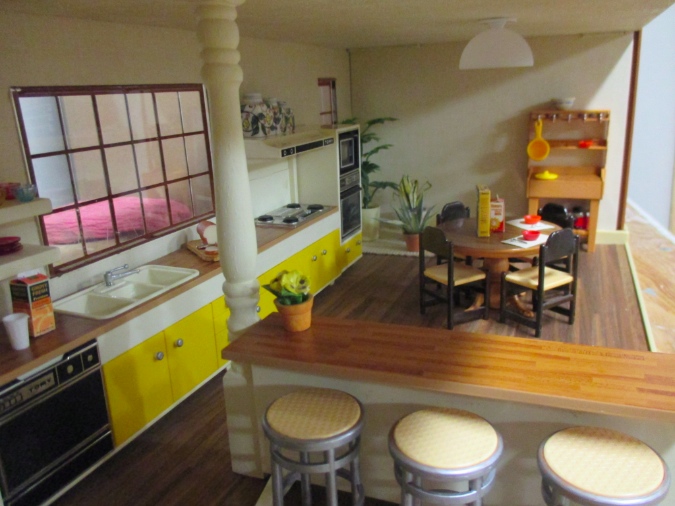 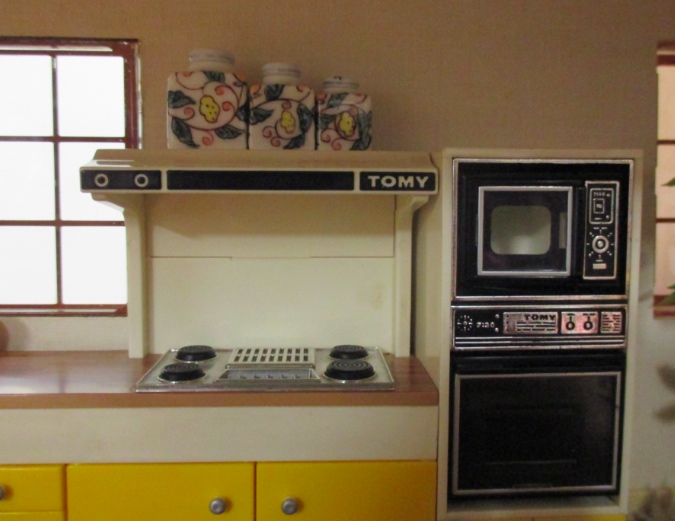 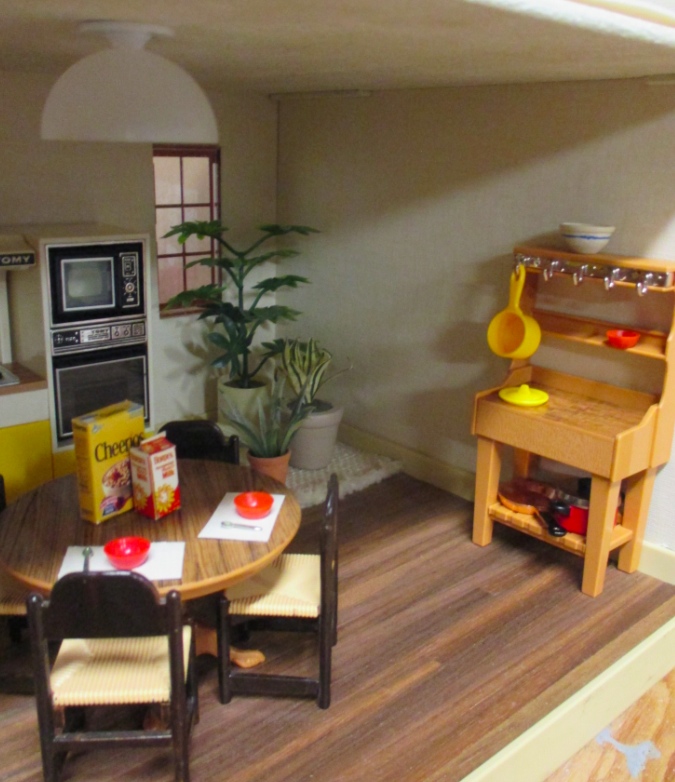 Victorianna – assembling the second half