Here’s the second little house I got at the miniature flea market in August (the first being the House of Hidden Treasures kit from American Craft). This one’s named Garden of Delights. 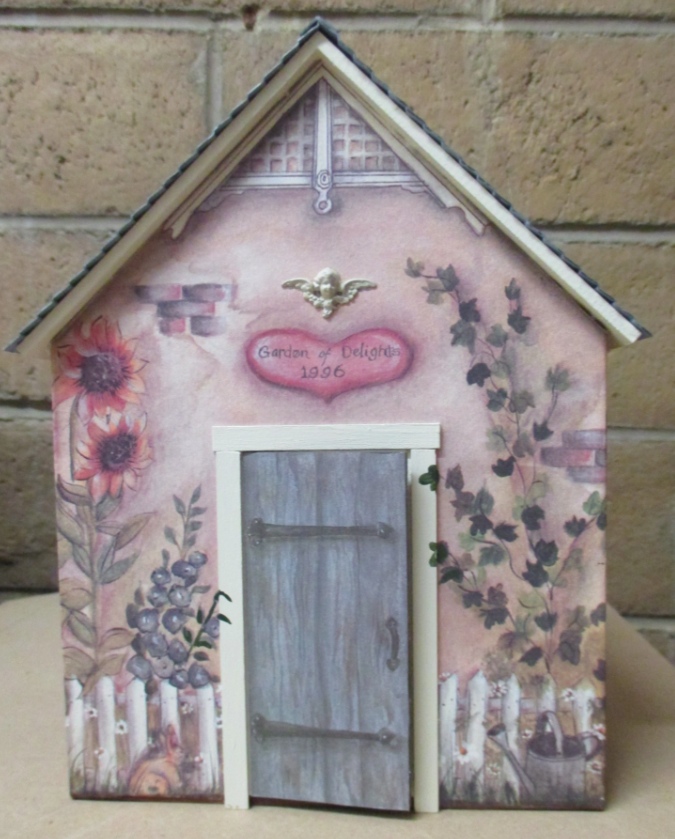 This was a NAME national convention souvenir in 1996. I recognized it because I’d seen one on eBay fairly recently, and I assumed it was half scale due to the size. It set me back a whopping $3. 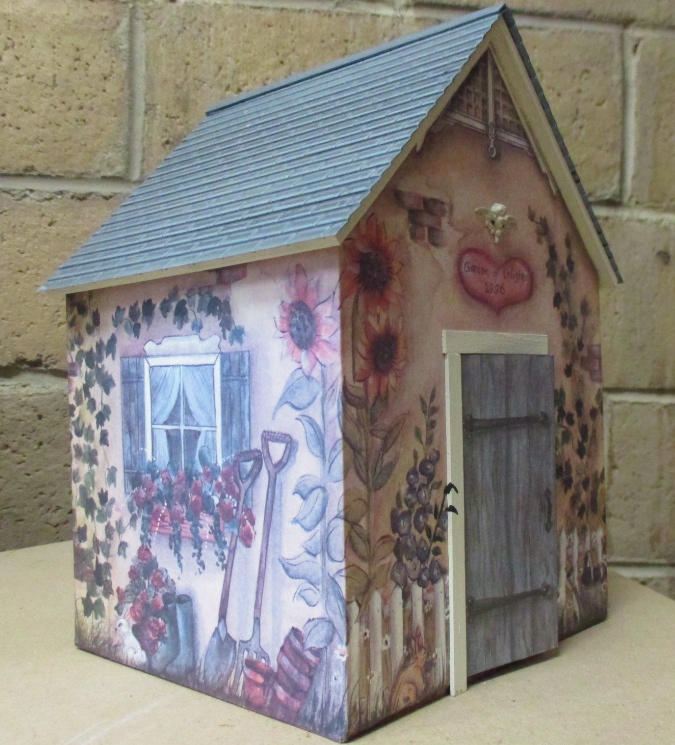 The little house has three handwritten names on the bottom: Sharon Zerkel, Dan Zerkel, and Dot Moore. A little Googling turned up a couple of old auction listings, including this one that says the house was designed by Pam Junk. 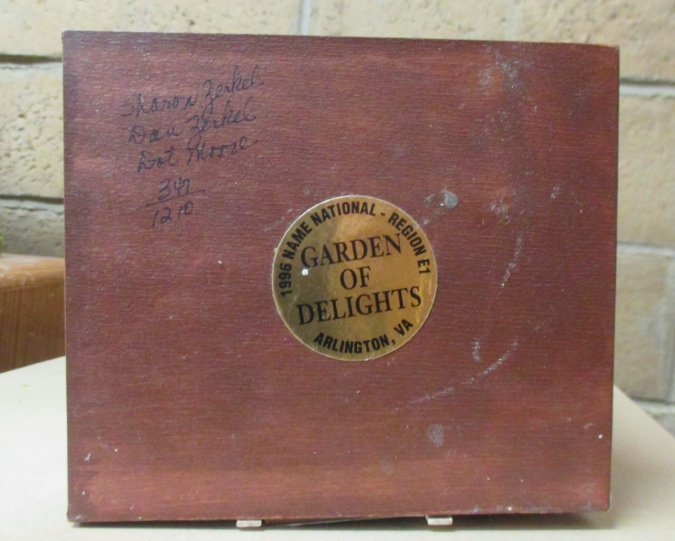 Pam and I have been email friends for over ten years and the artwork on the house did remind me of her work. (In fact, I think when I picked it up from the table at the flea market I said “Is this by Pam Junk?” but the woman I bought it from didn’t know.) On a hunch I searched my old emails and found some pictures she’d sent me back in 2004 along with info about the house. Being a digital hoarder pays off! 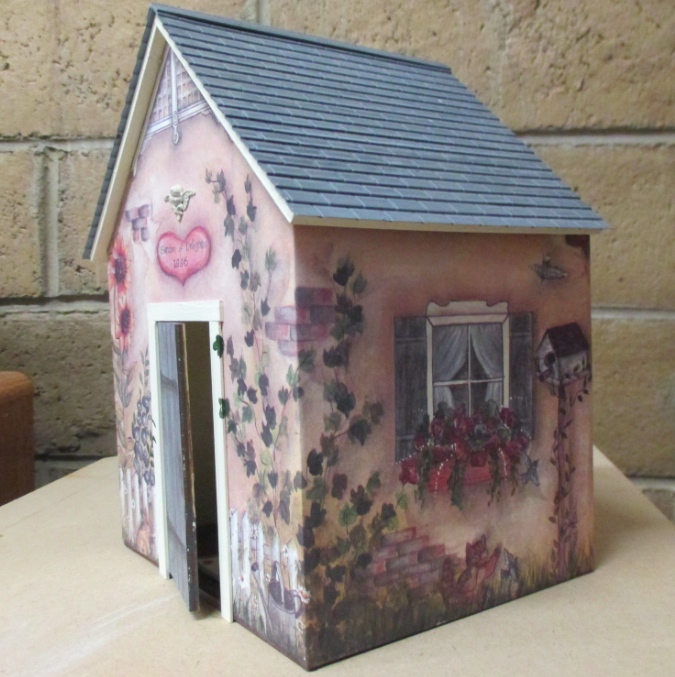 It’s actually a 1:12 kids’ play house, but the dimensions are close enough that it can work as a 1:24 house. I wouldn’t have realized that the door opens but I saw it ajar in one of Pam’s photos. I played with mine, which was stuck shut, and was able to pop it open. 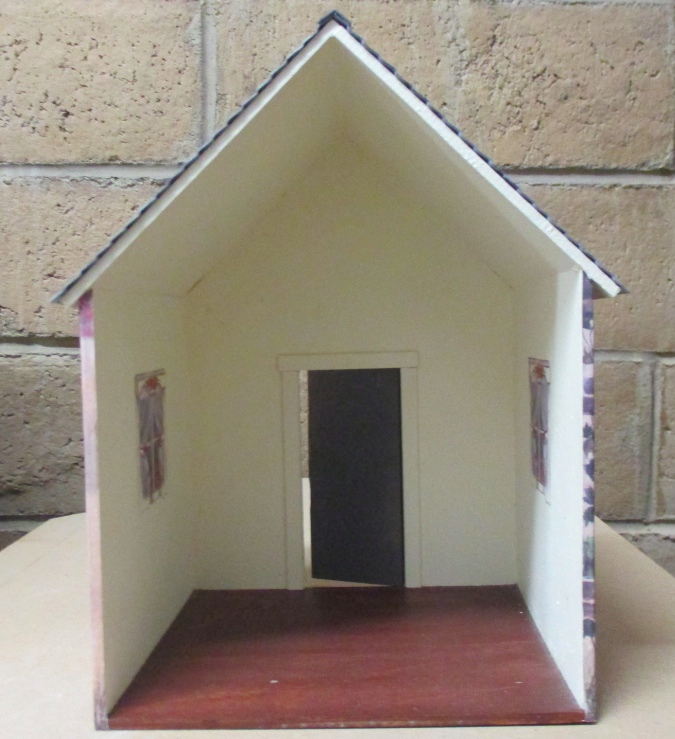 Here’s a photo Pam sent me of her play house. Seeing the little version in her photo reminded me of something else… 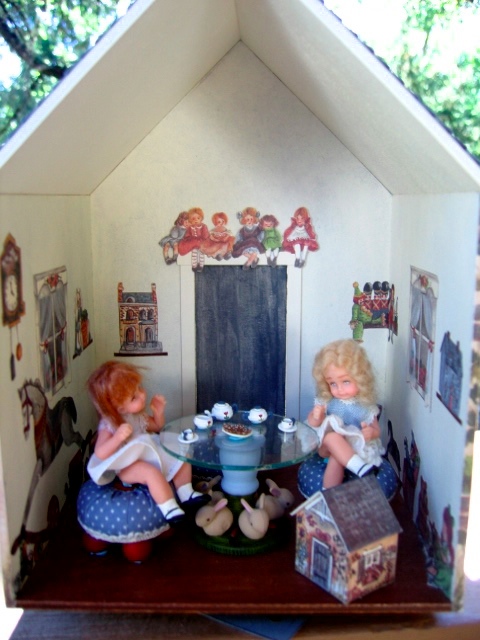 A week or so before the flea market, I had been pawing through some stuff put aside for a 1:24 toy shop (a ‘someday’ project) so I could stock up the toy shelf in the Victorianna and came across some paper dollhouse-for-a-dollhouse kits Pam had sent me years ago.

Lo and behold, one was for a mini Garden of Delights! This is actually a 1:48 scale version, but I could scale down the graphic even more to make a mini version to go inside the play house (as in Pam’s photo above). 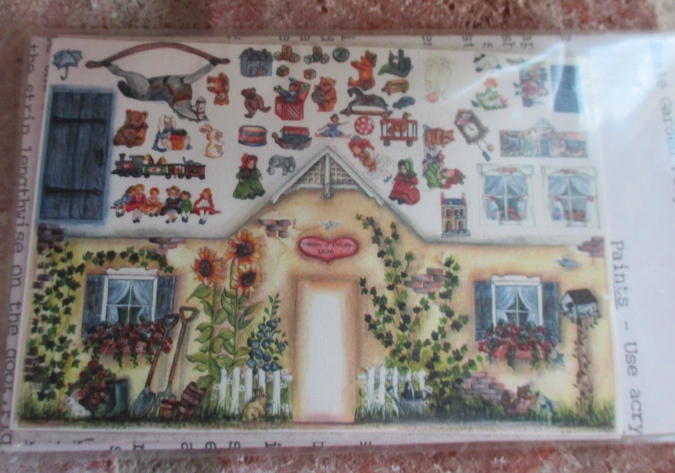 I emailed Pam to let her know about my flea market find and she sent me a few photos of her finished 1:48 version, sitting on a 1:12 table. Too cute.

Here’s what Pam told me about the house’s creation (posted here with her permission). Since the only names on it are the people who assembled the souvenir houses and not the designer or the artist, I hope anyone who searches for info about the Garden of Delights dollhouse in the future will end up here to learn the whole story.

This is the 1′ scale playhouse that I designed as the main souvenir for the 1996 NAME national in the DC area. It is a child’s playhouse and the outside is covered with all the details, only ‘painted’.

I designed and drew it all on a big sheet of paper. I filled in all the extra space beyond the art for the play house walls and front door, with windows, toys and a dollhouse for the interior. Then I hired a very talented artist/miniaturist friend of mine [Toni Miller] to paint it. Then I had a printing company do 1,200+ prints of the sheet. Then I had Lasertech cut all the wood pieces from nice 1/8″ birch plywood, using the patterns and layout I sent them. Then I contracted with three other miniaturists [Sharon and Dan Zerkel, and Dot Moore] to assemble and finish it.

The souvenir was a finished playhouse on the outside and an envelope containing all the rest of the printed stuff to play with for the inside, including instructions and a pattern for making the dollhouse of the playhouse out of wood.

The theme for that NAME national was “Garden of Delights”. All the details you see are trompe-l’oeil except the little garden angel over the heart sign. She is cast of metal that I painted Ivory and washed lightly with Burnt Umber.

I don’t know what I’m going to do with mine yet. I put some half scale furniture in to see how it would look, but this seems way too practical for this whimsical little house. For now I’ve put it up on the shelf, trusting that one of these days it’ll tell me what it wants to be… 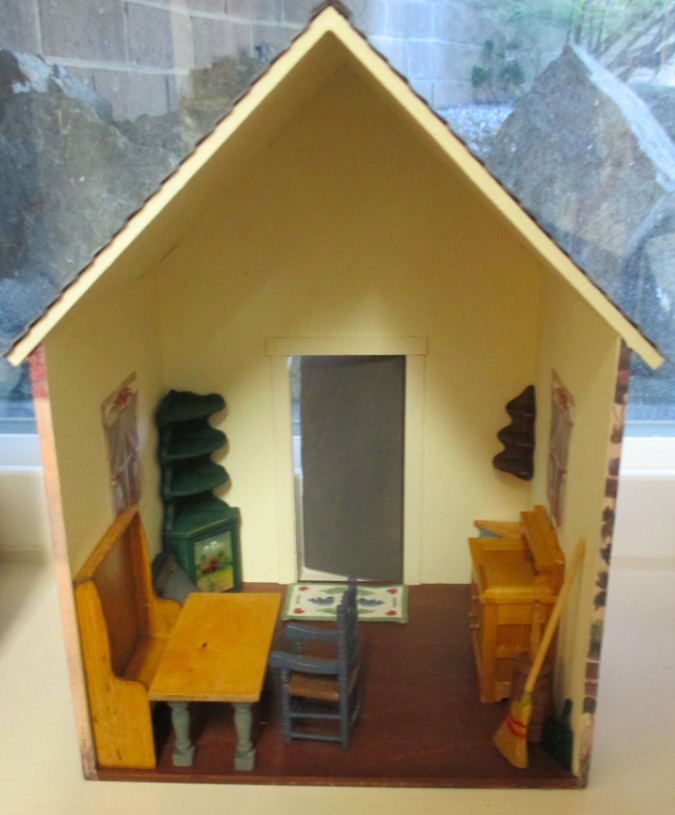