When I chatted with Jim Marcus about the Little Belle, he commented that it’s hard to paint a house like this because you have to be a really good painter to do justice to all the small details. He pointed out that when the house is all white, the shadows serve as a sort of accent color. He suggested painting the Little Belle’s shingles, stairs, door, and base in shades of gray, and leaving the rest white.

You can see the effect in his Russian Embassy house, which is based on the Westerfeld house at 1198 Fulton Street in San Francisco. (At one time it was a nightclub run by Russians, NOT the former location of the Russian consulate — all the mini magazines get this wrong!) More pics of this dollhouse can be found on the James D. Julia auction website.

I liked that idea and was planning on it (because I am *not* a good painter!) until I saw the Texas Showcase Little Belle with its brown shingles, and for some reason I really liked that. The Haze paint I used on the house has a tan tint to it and I thought brown would go better with that than gray.

I got a rich brown Behr sample named Chocolate Truffle. Home Depot had just started offering samples in other finishes besides flat, so I tried it in eggshell for a bit of a sheen. 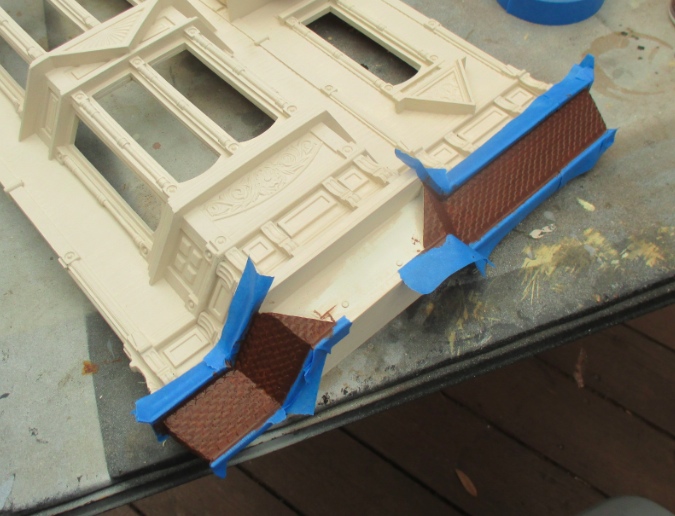 Even with masking tape, my lines are sloppy. (This is why I won’t be painting all the trim!) After taking this pic, I extended the brown up to the underside of the top trim. I’ll add some simple strip wood at the bottom, painted Haze, to cover up the blobs. 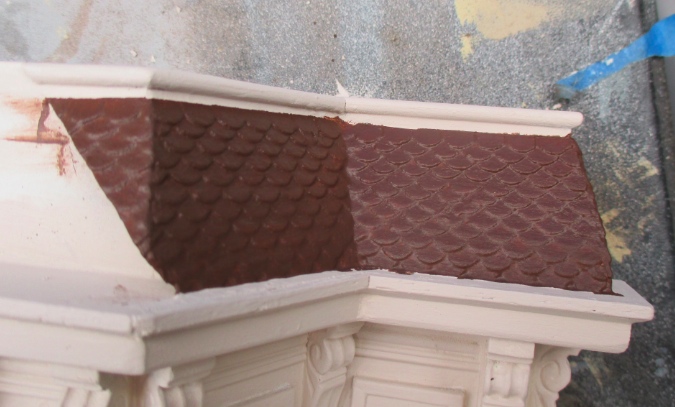 Here’s how it turned out. I love how the embellishments look when the light and shadows hit them right. A lot of my photos so far haven’t done them justice. 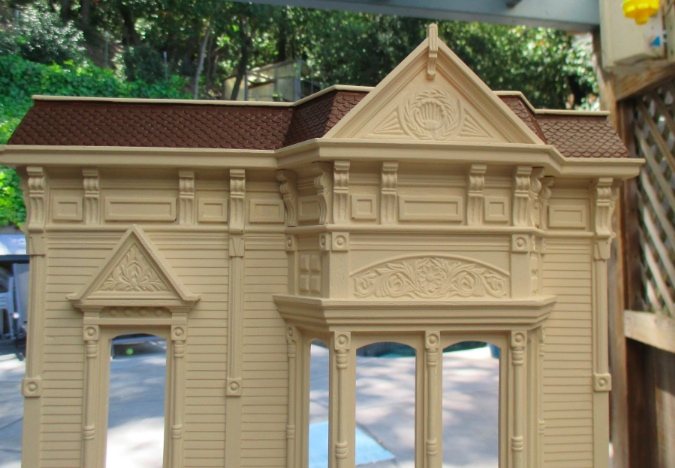 It looks nice and dramatic in that photo, but I didn’t really like the brown. It called attention to the brownish tint of the Haze base color and I regretted not going with a creamier off-white like I’d originally planned. It just seemed drab. The house sat like this for several months, and every time I looked at the brown roof I thought I’d made the wrong choice. 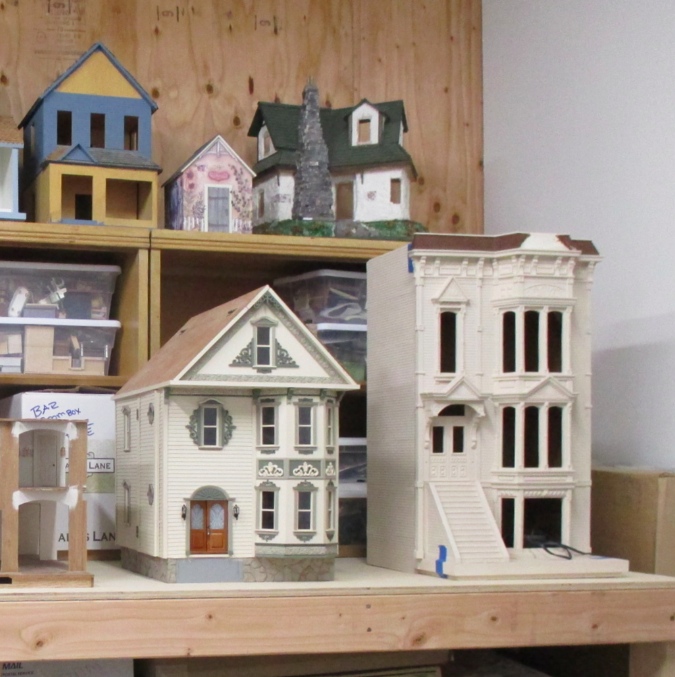 One thing I didn’t like about the brown was that it didn’t really go with my Delilah hinges, which have an antique copper finish. So I started thinking about turning my chocolate roof into a copper roof. I picked up two metallic paints at Michaels (Folk Art brand), appropriately named Copper and Antique Copper. The Antique Copper is a little darker, and I started with that.

Rather than paint this on thick, I splotched it on with a dry brush, allowing some of the chocolate color to show through. Here’s how it looks compared to the hinge — a bit darker and more orange. 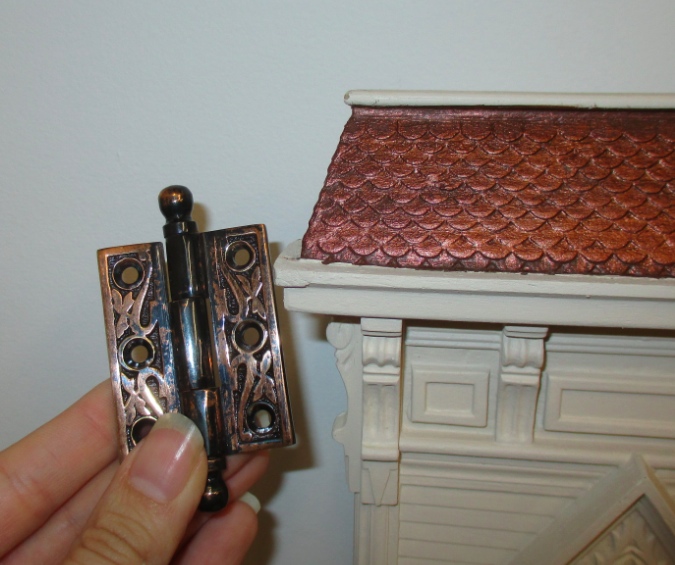 Next I splotched on some of the lighter copper, and some metallic gold I already had. I brought the house outside to try to get a better picture but there’s still some glare.

Next I splotched on a bit of Glidden Mossy Green, because a copper roof would surely tarnish over time.

Finally I went over it with another round of Antique Copper (covering up most of the green in the process, oops). I’m not sure if it’s perfect yet, but at this point I decided to put it aside and see what I think of it another day.

Here’s the “finished” roof next to the hinge. Not identical, but they complement each other. 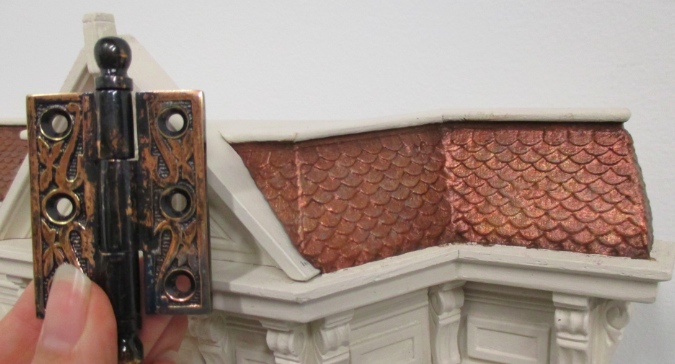 And here’s the full effect. I think it goes well with the Haze, and it’s more interesting than the brown was. I’ll probably try painting the door brown to look like wood, and might paint the base, but could do cobblestones or bricks there instead. 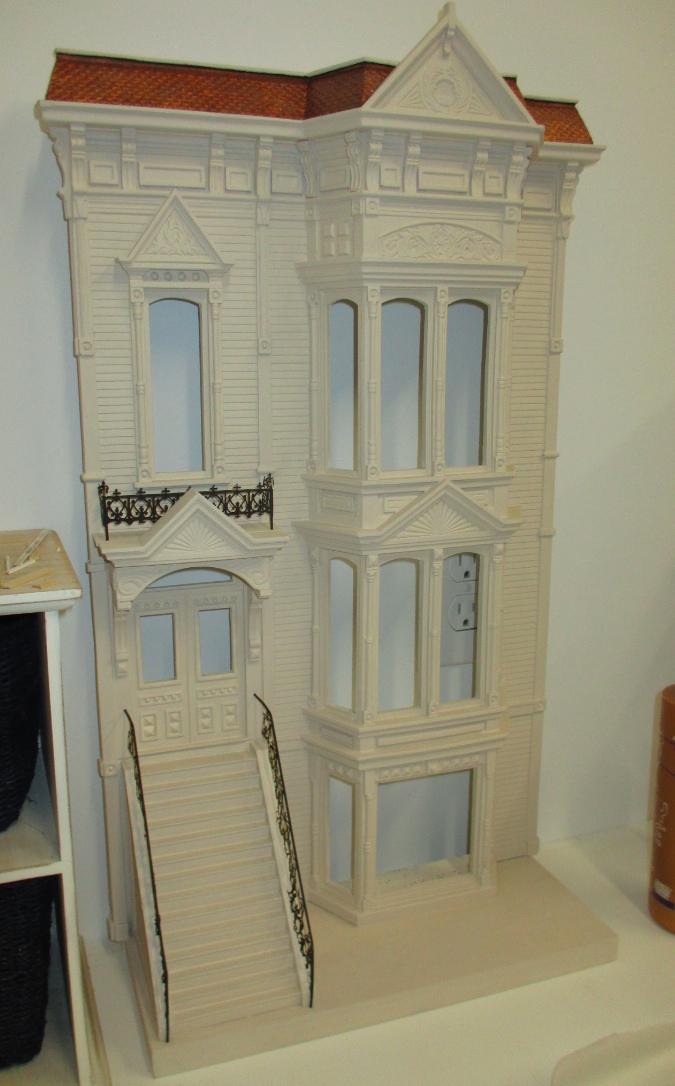 In other news, it’s been so long since I blogged about the Little Belle, I completely forgot that I’d stumbled upon another one in addition to the one I posted yesterday. This one, from an April 2013 eBay auction, has the medallion on the front right corner, and doorknobs. I can’t tell how much it sold for without signing up for a Worthpoint account, not doing that (it’s a “free, but really we’ll start billing you in 7 days” type thing).

So the tally of located Little Belles is now up to 11, but since some haven’t been painted it’ll be hard to tell if the same dollhouse pops up on an auction again later.