Little House cabin: A table and chairs, and some other touches

For the past month I have been struggling with electrifying the Queen Anne rowhouse. I’ll write up a blog about everything that’s gone wrong (and hopefully save some others out there the heartache I’ve experienced with a certain brand of light fixtures…) but I’m so annoyed about it right now I don’t even want to think about it. So, I spent the afternoon distracting myself with the Little House cabin, which has been sitting neglected since the rowhouse made itself the center of attention back in September.

Although I haven’t been working on the cabin, I have been collecting accessories to put inside of it. A few weeks ago I won an eBay auction for a lot of unfinished half scale furniture from an estate sale. 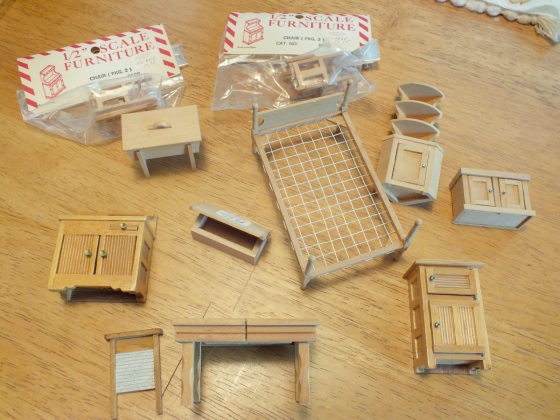 The lot included four chairs, which I happened to need for the cabin. The brand name on these chairs is Craft(?) Creations of El Cajon, CA, but the sticker on the packages said Fred’s Carpenter Shop in Pittsford, VT. They’re made from balsa, which makes them seem a bit cheap, but I figured that could work in the rustic cabin. And they definitely weren’t cheap cheap… the price tags were marked $10.75 for each package of two! (Way overpriced, IMO…) 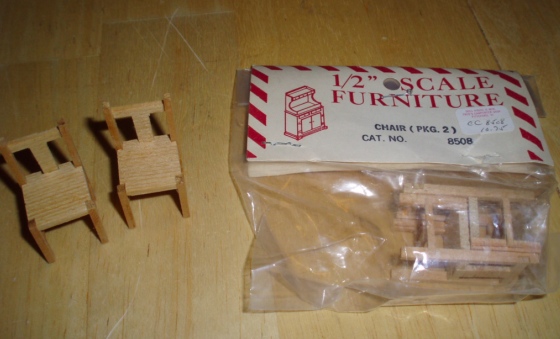 They’re a tad short for the table I’m using, but I decided that’s okay on the prairie. (The eBay auction did include a table, also made of balsa, but I decided not to use it in this house because the table has a hidden leaf… way too fancy for the big woods of Wisconsin! I’ll save it for another house.) 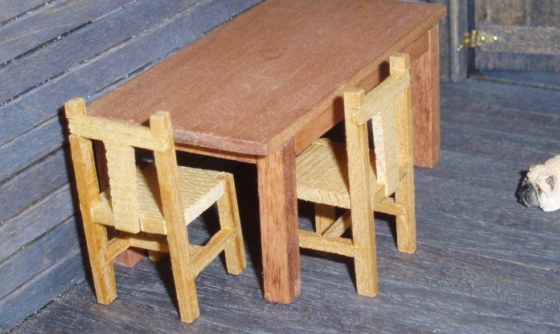 The Little House books often refer to Ma’s red checkered table cloth. I yanked this fabric off a Dollar Tree bed that I’ll (theoretically) refinish one of these days. The corners had been glued to the foam “mattress,” so they’re a little crusty. 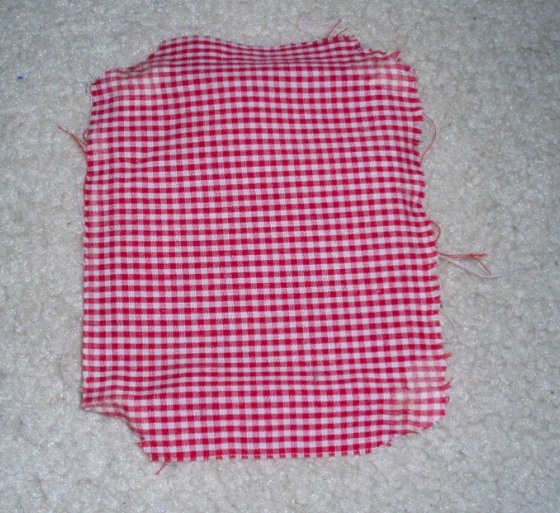 I trimmed the edges, used a tiny amount of anti-fraying glue to keep the fabric from unraveling, and draped it over the table. It just kind of sits there. 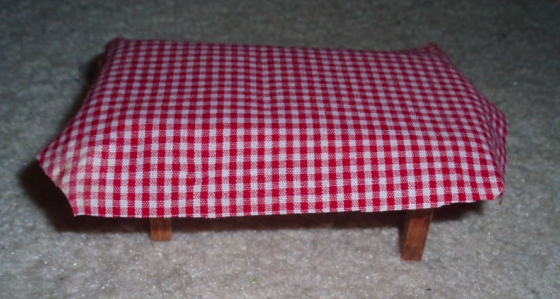 Following this tutorial, I cut a piece of cardstock to fit over the table top and hold the tablecloth in place. Didn’t have the double-stick tape called for in the instructions, so I glued the tablecloth to the card instead. I also ironed the creases. It’s not perfect, but with the chairs tucked in, it’s passable. 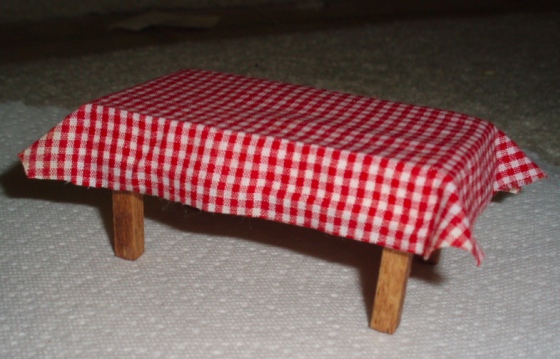 I stained the balsa chairs with a Minwax cherry stain pen, and to make them look more realistic, I created woven seats using DMC floss. The center back part of the chair sort of got in the way, but they turned out all right.

Here’s how they look together. Today must be Saturday—baking day! Black Susan the cat is looking longingly up at the goodies… 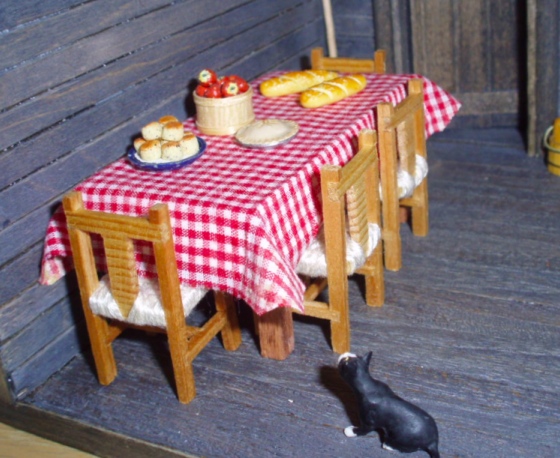 Here are some of the other odds and ends that will go inside the house. I just got little blue pitcher and tin cups from eBay. I’m planning to build a wall shelf to hold these dishes, which will go near the fireplace, over the utensil rack. 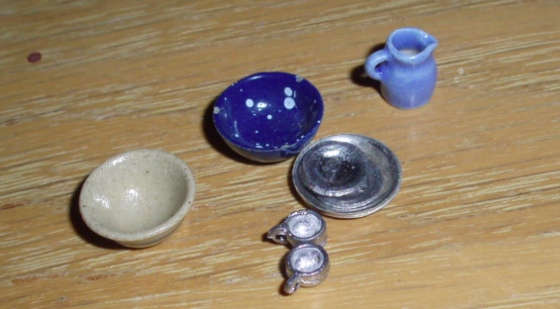 I got this powder horn (on clearance!) at a Boston area store, Dollhouse Treasures, when I visited my parents earlier this month. It’s supposed to be 1:12 scale but I shortened the straps, and I think it looks okay. Horns come in all different sizes, right?! 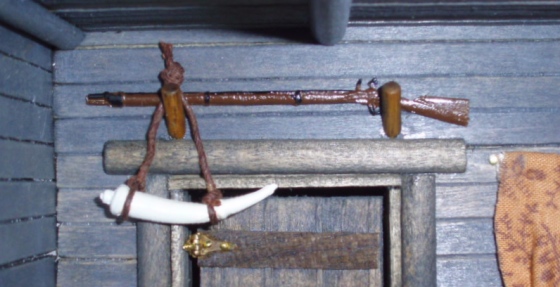 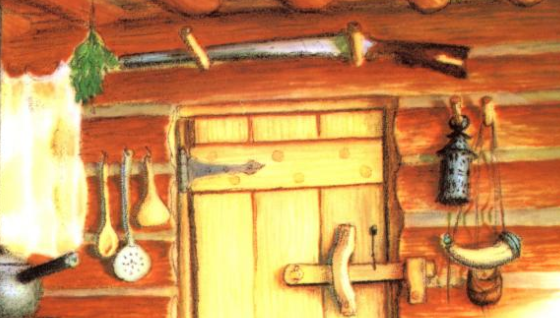 My most exciting recent find is the china shepherdess. She also came from Dollhouse Treasures, but unfortunately not on clearance… I paid $20 for her. (And she’s less than an inch tall!) But she was too perfect to pass up, dressed in pink and white with blonde hair and a bonnet, just as the books describe her. She even has a little smile on her face! 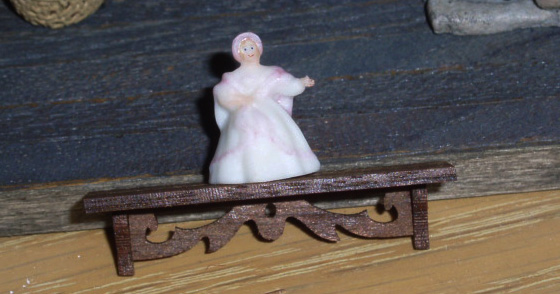 She’s a tad larger than I wanted, but I don’t think I’m going to find better than this, and anyway she’s WAY less creepy than the railroad figure I had been using. She’s stuck to the shelf with putty, and I’m planning to glue the shelf to the wall above the table… normally I don’t like doing that, but that little outstretched hand will inevitably break off if she and the shelf take a tumble. Gotta protect my investment!

Last but not least, I cross stitched quilts for the bed and the trundle bed. I still need to make some pillows, and bedding for the cradle. The box at the foot of the bed came from the same eBay auction as the chairs. It’s still raw wood right now, but maybe I’ll stain it. I also plan to make some sort of table or washstand for the pitcher and basin (another recent eBay acquisition). 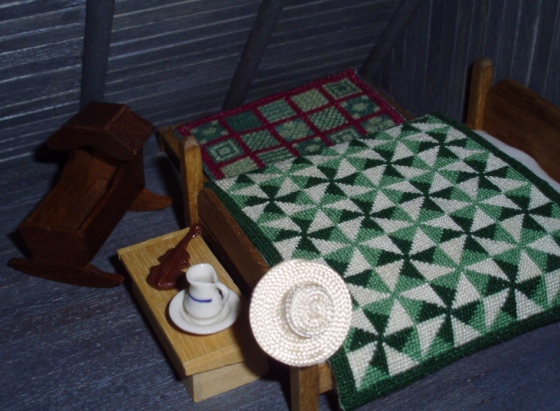