I don’t know what materials were originally used to create the texture on the outside of the Bill Lankford cottages. Possibly spackling compound. In the past I’ve used watered-down wood filler for a stucco effect (Rosedale, Artist’s Cottage) and since I’m more experienced with that than spackle, I decided to do something similar to add texture to the cottage walls.

My wood filler was almost empty, so I bought a new one. Previously I had been using Elmer’s brand and this is Dap “plastic wood” (Home Depot didn’t have Elmer’s). The consistency is different, almost like thick tahini sauce. 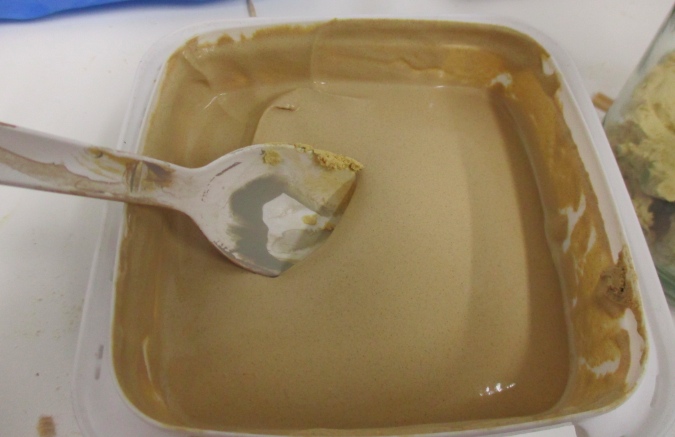 I mixed it up with the rest of the Elmer’s (the yellower, crumblier stuff). 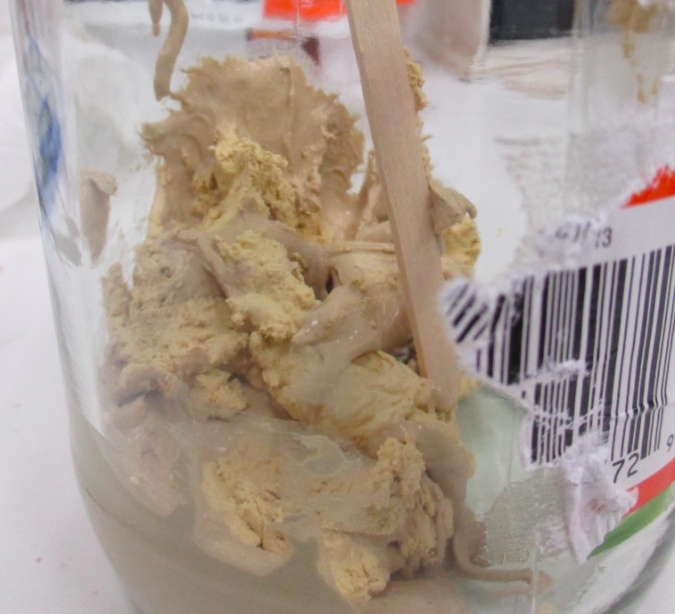 After adding water and stirring, they mixed together fine. It was a little thin — maybe I should have added more of the Dap stuff — but I just wanted some texture, not stucco necessarily, so I thought thin would be okay.

Before I started painting it on I put tape over the windows, leaving a bit around the edges to account for the trim, which I thought would be easier to glue onto flat wood than textured. 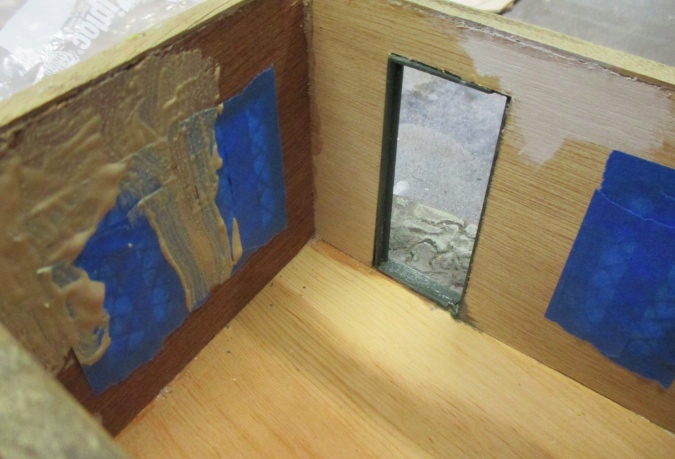 I forgot to take a picture at this point in the process, but I spread this stuff on the walls with a sponge brush, swirling and dabbing to create texture. When some of it had dried a bit I went back and dabbed some more. Then I let it dry a few hours, peeled off the masking tape, and started the first coat of paint. 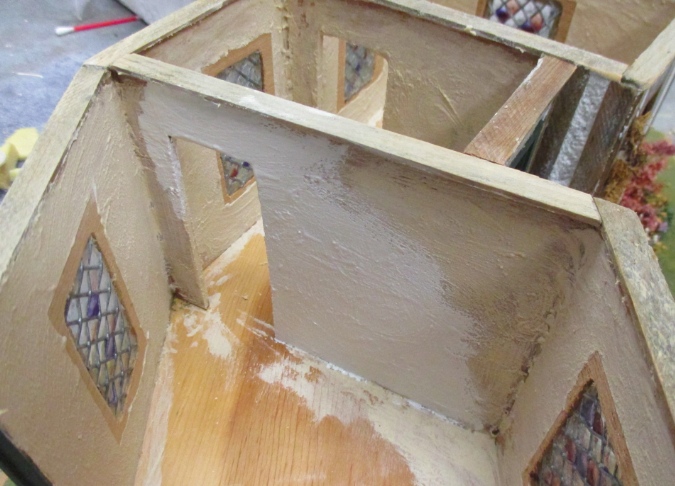 Here it is completely painted. I was using a sample jar of Behr “Sandstone Cove.” 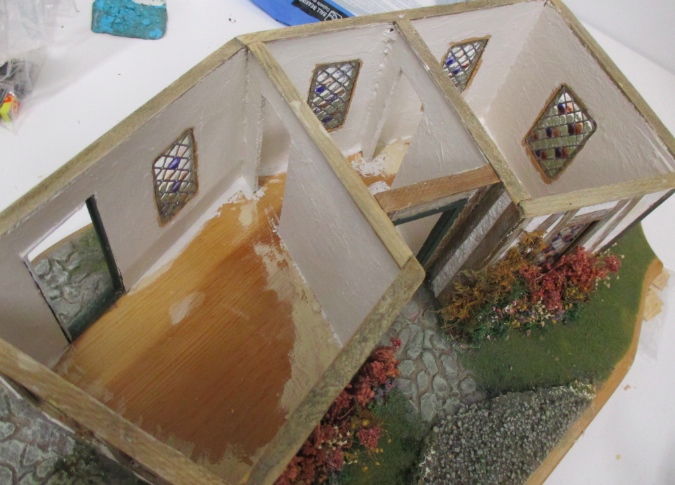 The masking tape didn’t work out quite how I’d hoped. I think this happened on the Rosedale, too — the lines left by the edges of the tape are much too obvious, especially since I wasn’t precise about how much trim area got masked off. 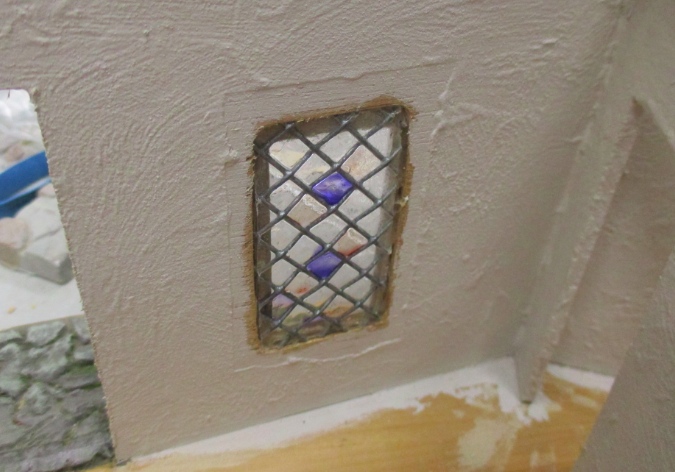 I did another round with the wood filler, being super careful not to get it on the windows. I also touched up some other areas that hadn’t come out as textured as I wanted. 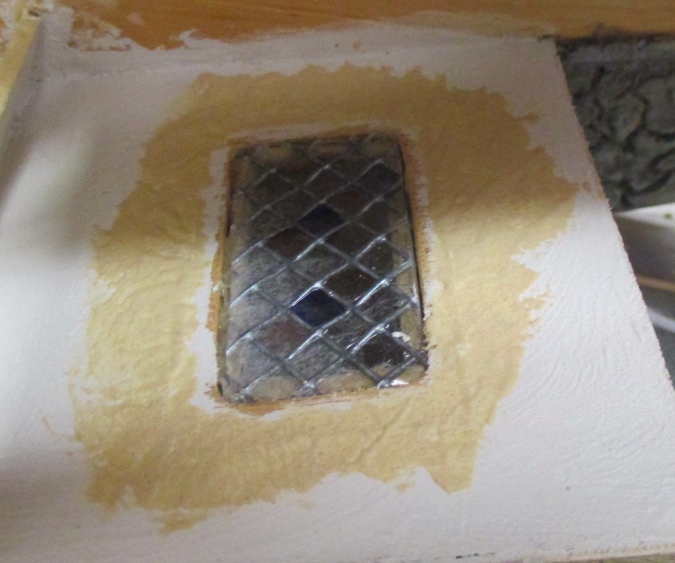 Much better! And because this is a thin layer and not as bumpy as the stucco, I don’t think gluing trim over it will be a problem. 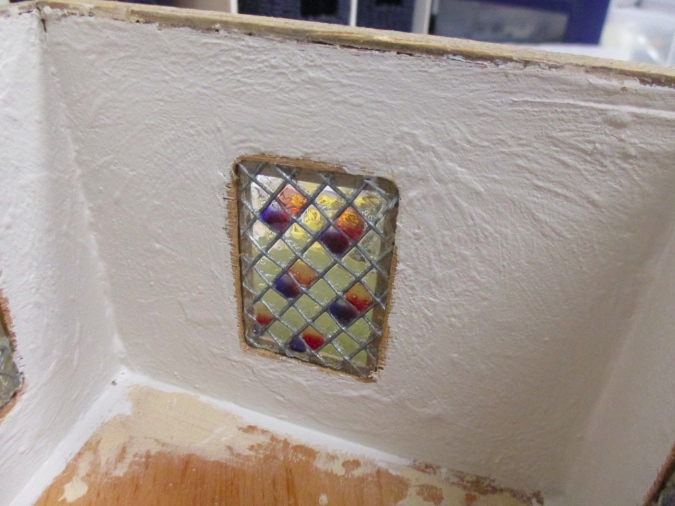 Here’s the Thatched Cottage with all its walls done. 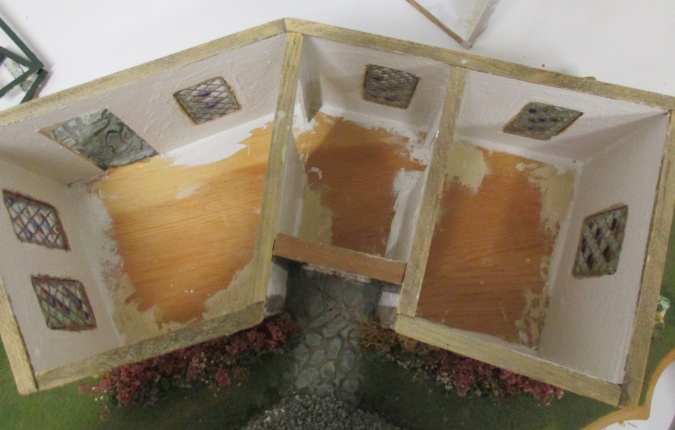 On to the Tudor. I did the walls the same way, using the sponge brush to add texture. I already punched out the windows on this house (to be re-glued in later) so I didn’t have to tape them off. 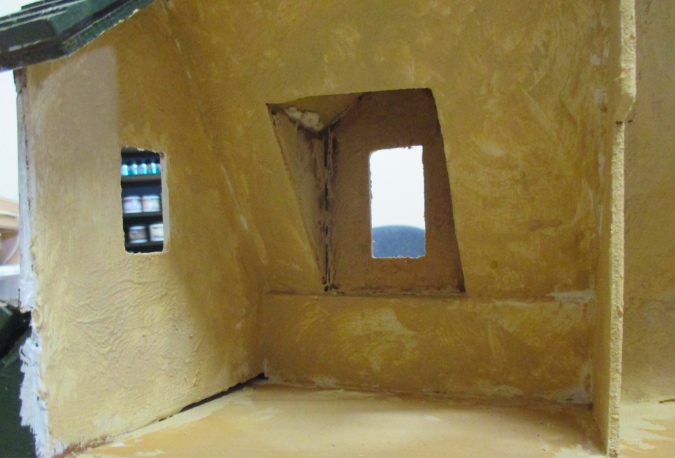 The Tudor needed some external repairs as well. One side of the dormer was unpainted. 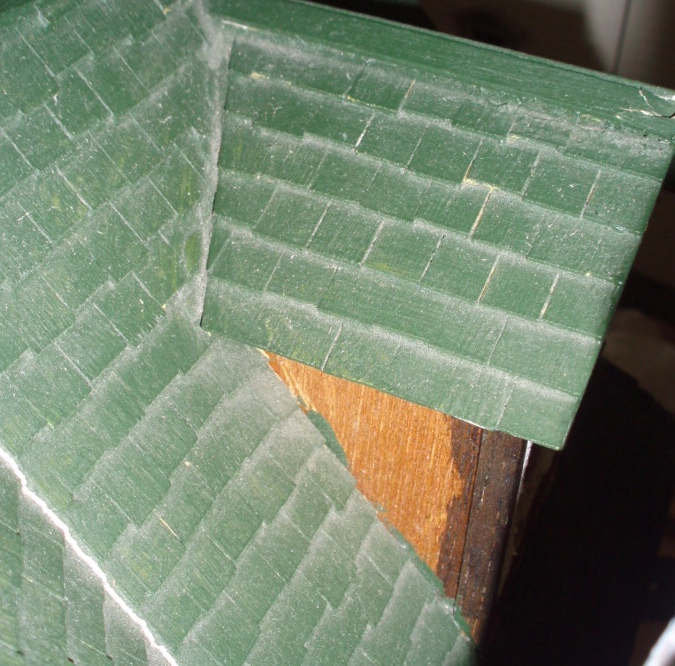 I removed the trim piece from the side, put down masking tape, and added texture as best I could without making a huge mess.

Also, notice how dusty the shingles were in the picture above?! While the wood filler on the dormer was drying I took a damp paper towel to the whole roof. Here you can see it with the bottom and right side wiped, and the left side not yet wiped. Eventually I’ll either repaint these or add washes, but for now I’m just glad to get that dust off! 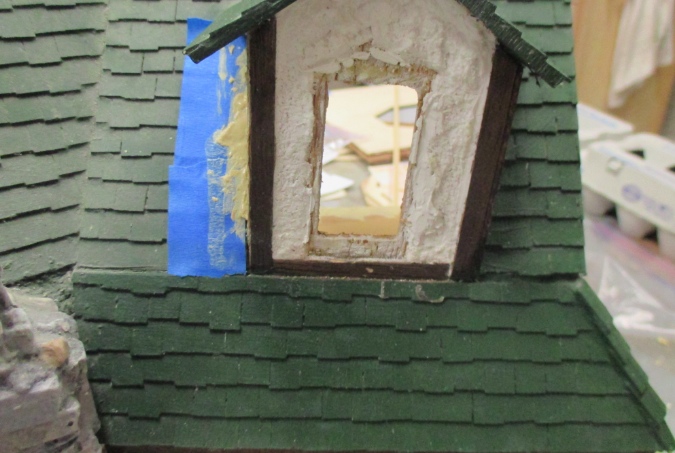 Here’s the side of the dormer textured and painted. It’s not nearly as thick/bumpy as the rest of the house, but it’s the best I could do without making a mess on the shingles and chimney. 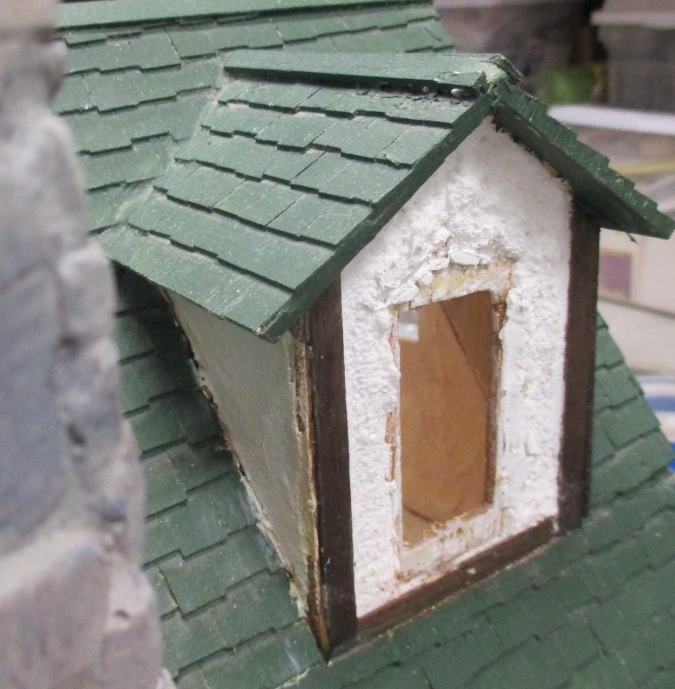 This house has a few brick patches that show through the stucco. They haven’t been very well blended in. 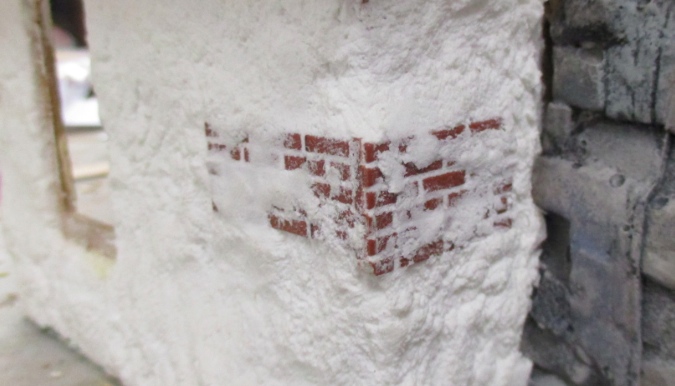 I added wood filler around the brick patches to cover up the straight lines and corners. 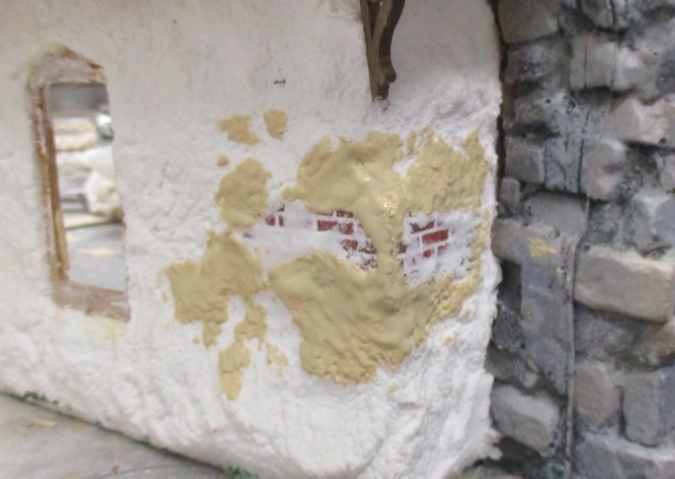 I noticed something weird about the opening for the bay window. A piece of strip wood was glued to one side of the opening at some point before the stucco was applied – you can see it from the inside. 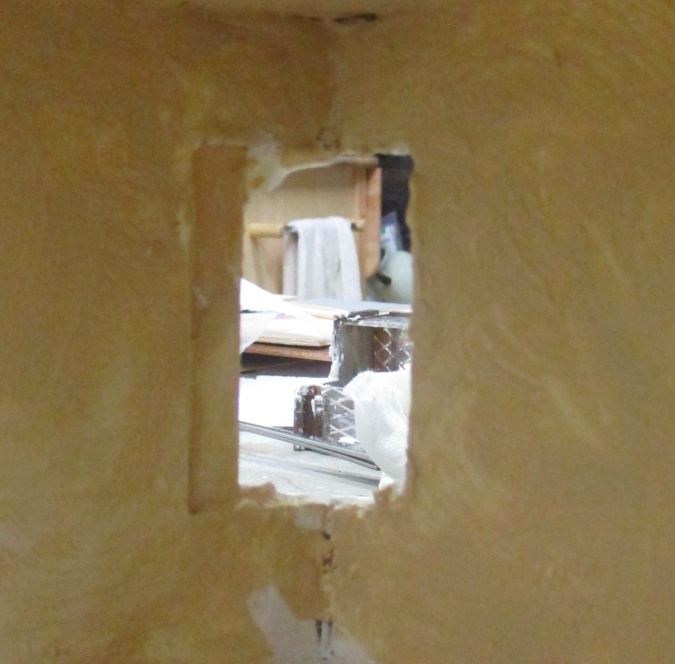 On the outside it’s covered up with stucco. 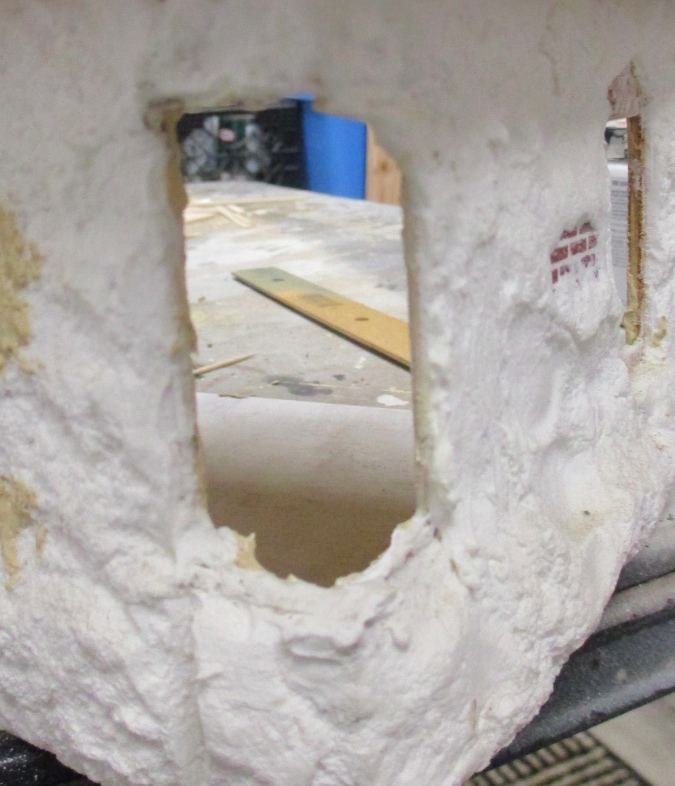 Not only does this make the opening lopsided, but there are still gaps on each side of the window (which is why I pulled it off in the first place). Comparing it to pictures, I don’t think this is the original bay window… either that or it was built wrong. It just doesn’t fit the opening. 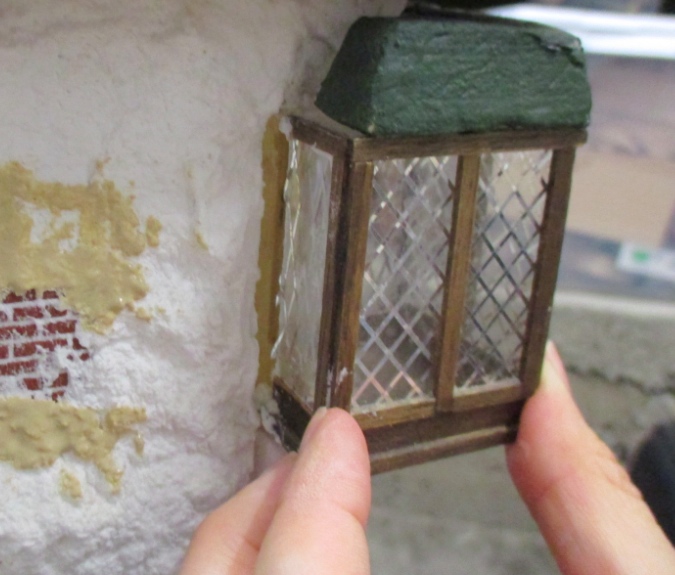 So, I ripped off the piece of strip wood and will have to start from scratch on the bay window when the time comes.

Here’s how the interior looks after the first coat of Sandstone Cove. It was all going so well, until I turned the house around… 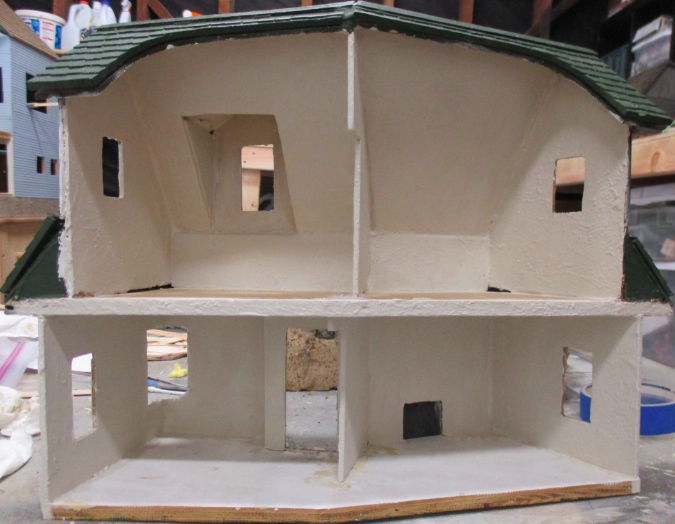 I don’t know why I thought this paint color was a good match for what was already there. It isn’t even close, as you can see on the edge and around the brick where I’d touched up over the wood filler. 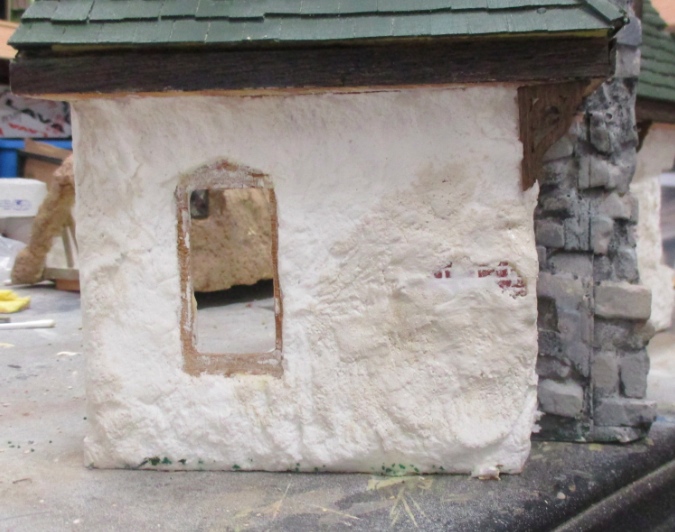 “I know,” I thought, “I’ll just repaint the whole thing with Sandstone Cove. What could go wrong?” 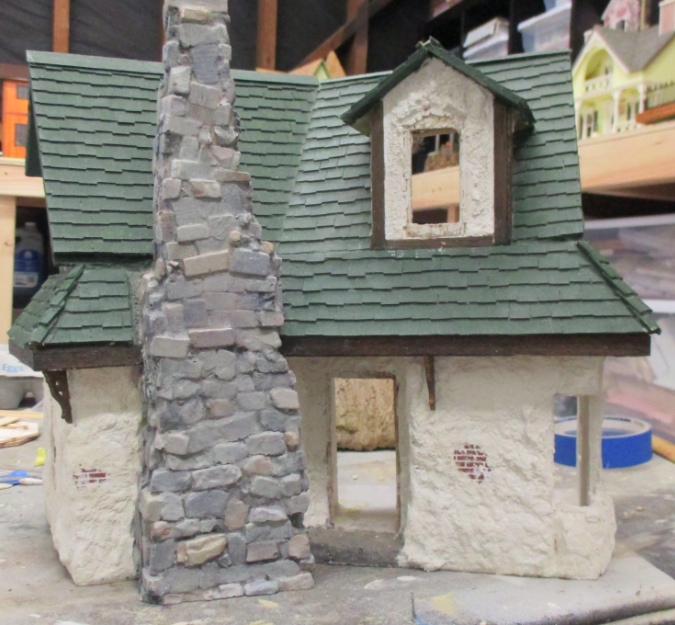 Ahem. Lighting and the flash and the camera’s automatic color correction make it hard to see the nuance, but once I’d gone over the whole exterior with Sandstone Cove it looked AWFUL. Like dirty snow. 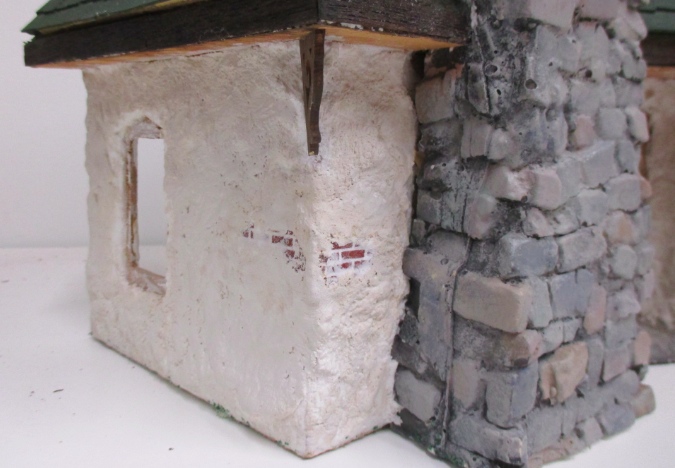 In a fit of rage I went over the whole front again, this time with bright white. In this picture the left side has been re-painted and the right is still Sandstone Cove — see how dingy that looked? 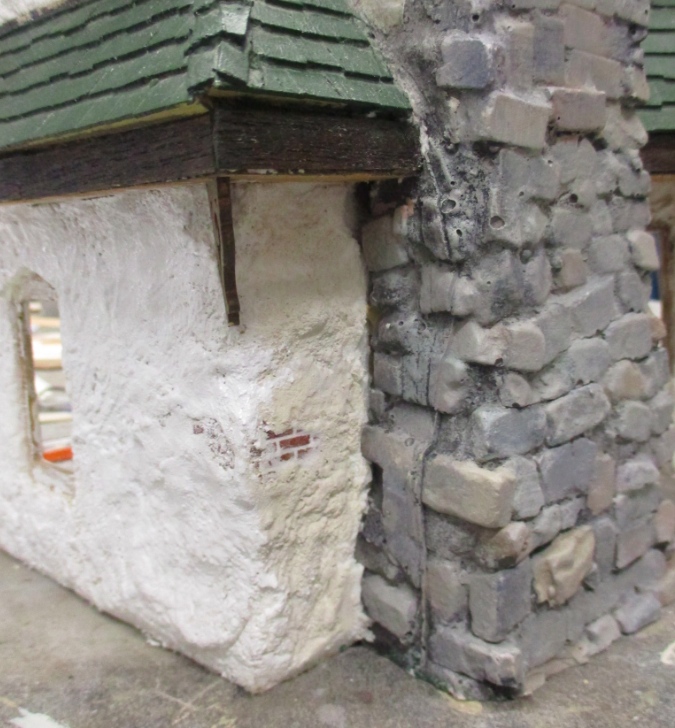 Of course, since there’s no real separation between the back and the front, now I had to redo the inside, too. I can’t believe the Sandstone Cove was so gray. It really didn’t look like that as I was painting it. (Out of laziness, I’ve decided to leave the Sandstone Cove inside the Thatched Cottage, since you don’t really see the outside and inside “next to each other” in that house.) 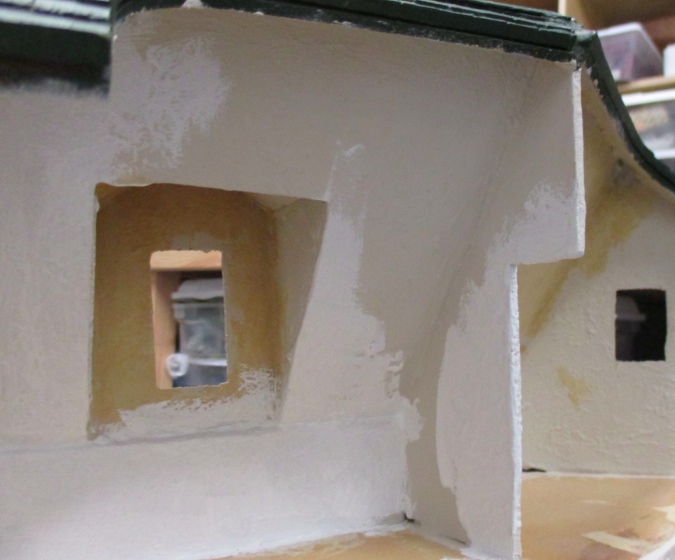 And here’s the Tudor with its new paint job. When the flash goes off it looks a tad too white, but I think I’ll blame that on the camera. I’m not painting it again! 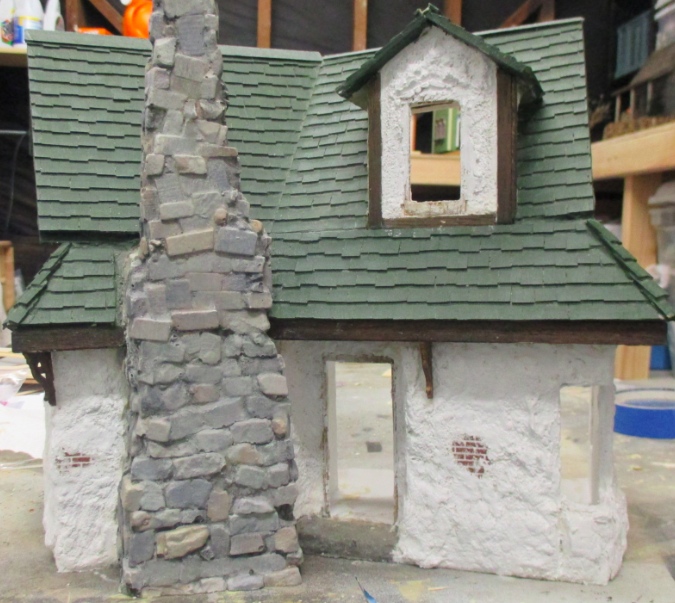 I need to do a few touch-ups inside — those holes where the dormer roof meets the wall on the left side, and around the insides of the window holes that I didn’t realize will show once the resin windows are glued back in — but this is done for now. 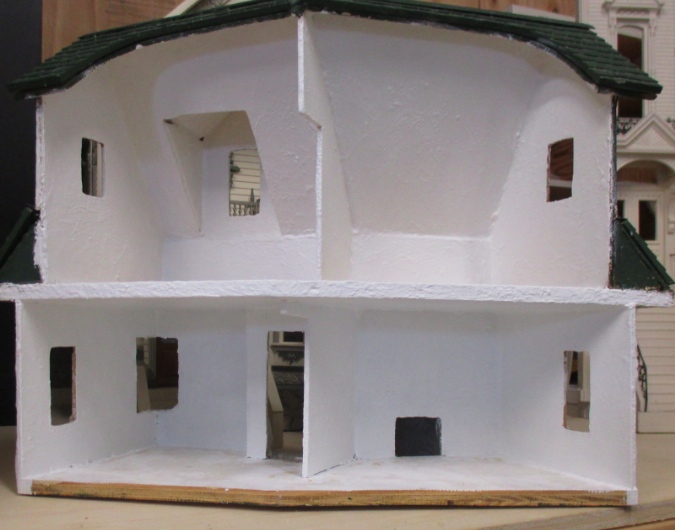 I haven’t decided yet if I’m going to do egg carton stone on the first floor, or hardwoods. If I do stone I’ll wrap it around the front edge, but if I do hardwoods I’ll go back and texture and paint the edge like it is upstairs.