Since my last post, I have spent a lot of time staring at the Turret House. It came with windows and exterior doors but no other trim, which I guess is good because I can make it look how I want. But I also have to try to figure out what the builder intended to do. It’s a challenge to complete someone else’s vision when I don’t know what that vision was.

The Turret House looked like this when I got it: 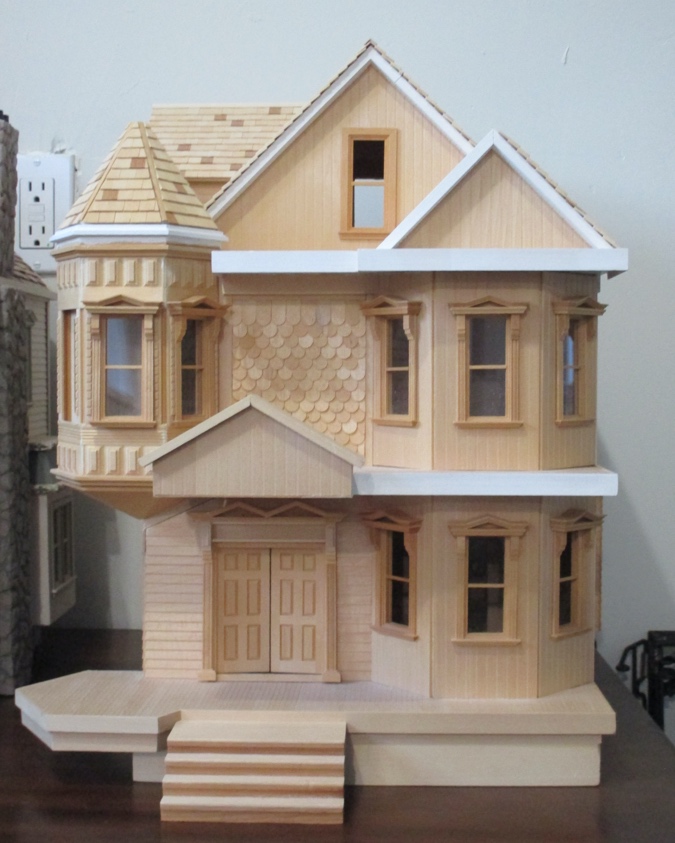 I already have several light-colored dollhouses, including the Victorianna, the Gull Bay, the Little Belle, and the Queen Anne Rowhouse. I want the Turret House to be bold. I did some searching and came across this inspiration house on Pinterest. I envision the Turret House being more red than this one, but I love the dark blue trim and the gold accents. 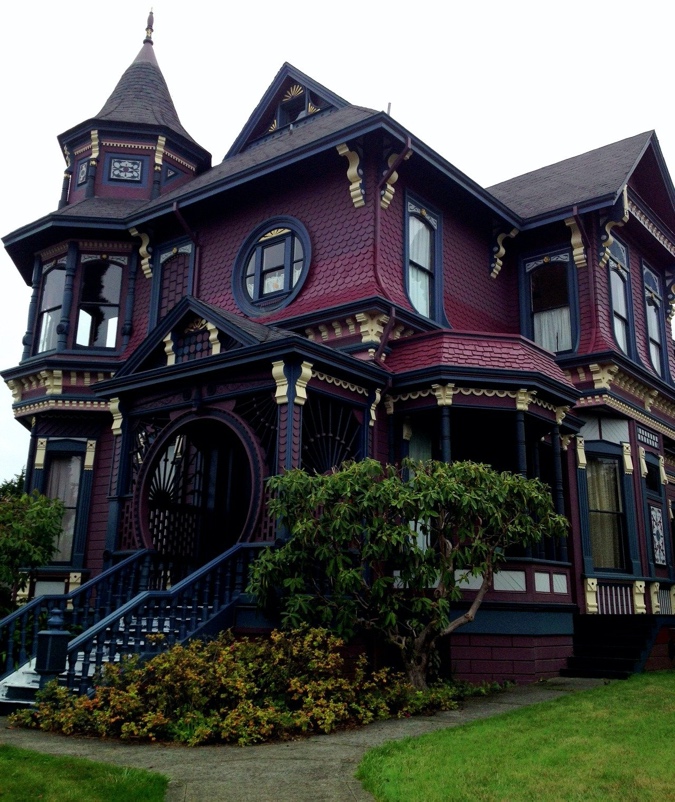 (I can’t figure out where this picture originated, to give credit for it. If you know, please post in the comments!) This is the Bair-Stokes House in Arcata, CA, built in 1888. PriceyPads.com has some historical pictures with other color schemes. I like the bold colors best.

While I was waiting for some orders to come in the mail, I started by staining the shingles with Minwax Ebony. I’ve always stained shingles before gluing them on, so the fact that the shingles are already attached made me nervous. I’m not complaining — gluing on shingles is tedious and I’m glad it’s already done! But stain doesn’t cover glue, so I wasn’t sure how they would turn out. 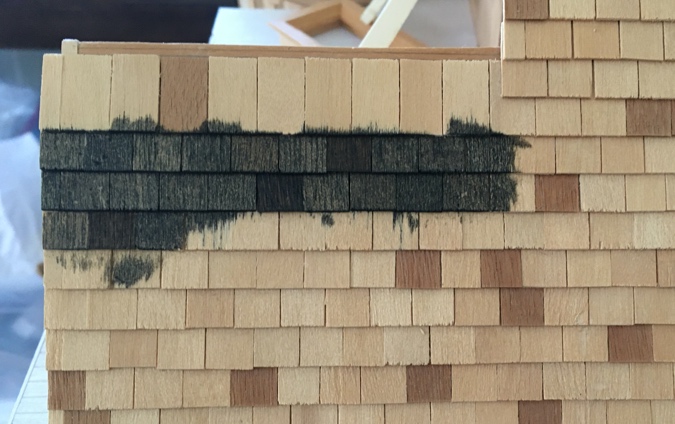 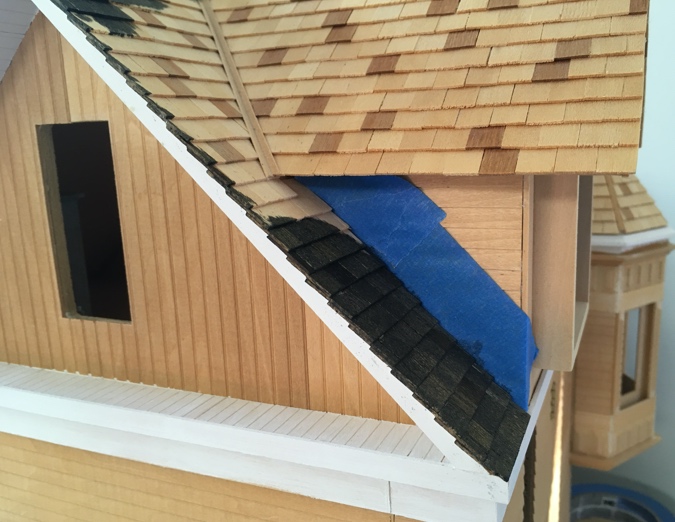 Not bad! There are some spots where the stain didn’t take, but I should be able to mask those with black paint or a wash. 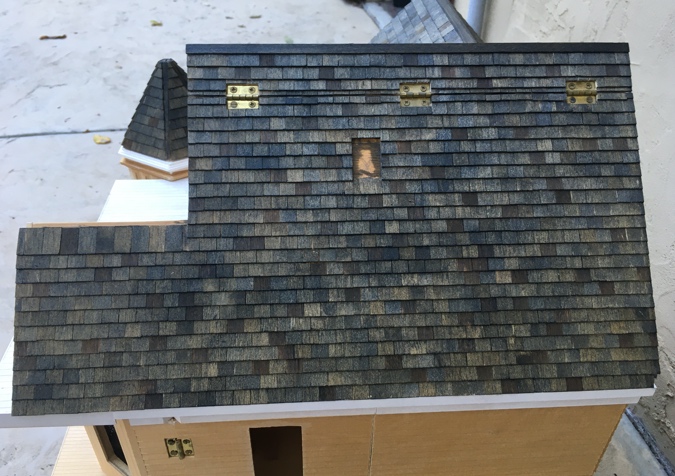 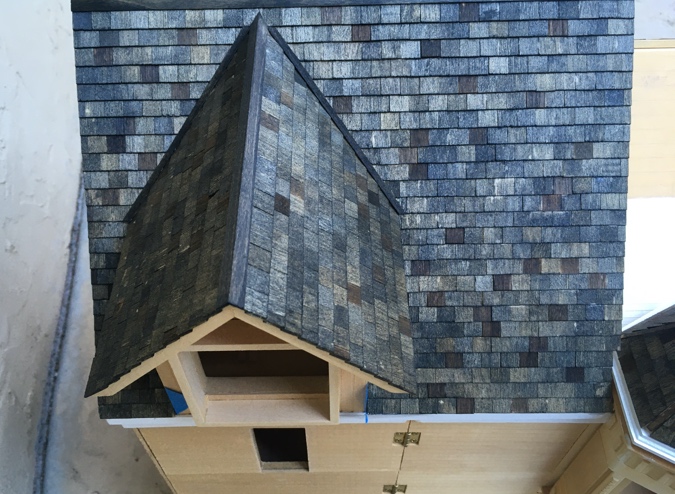 I have to add shingles to the left side of the gable, but I’ll stain those before gluing them on. I’m not as neat with the glue as the person who started this house! 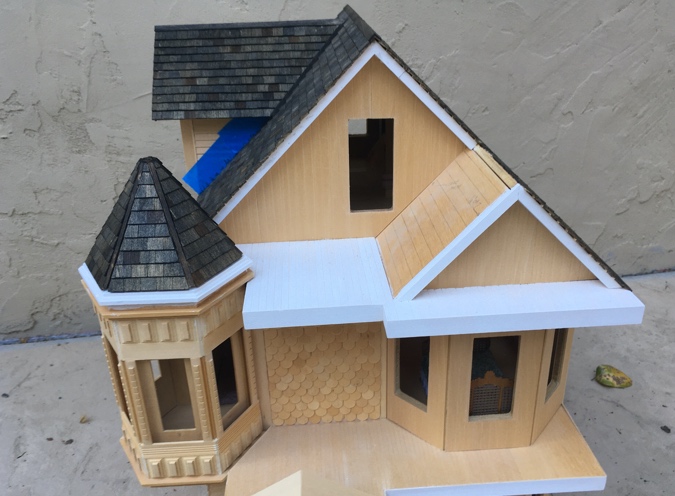 I bought paint samples off the Home Depot website. Whenever I go to the paint counter there I get overwhelmed by all the color choices, and I hate waiting around for them to mix the paint, so I decided to take my chances with mail order.

I got two different reds — the one on top is Behr Dark Crimson and the bottom color is Timeless Ruby. They look almost exactly alike. I decided on the Dark Crimson (the top color), which is just a touch darker. 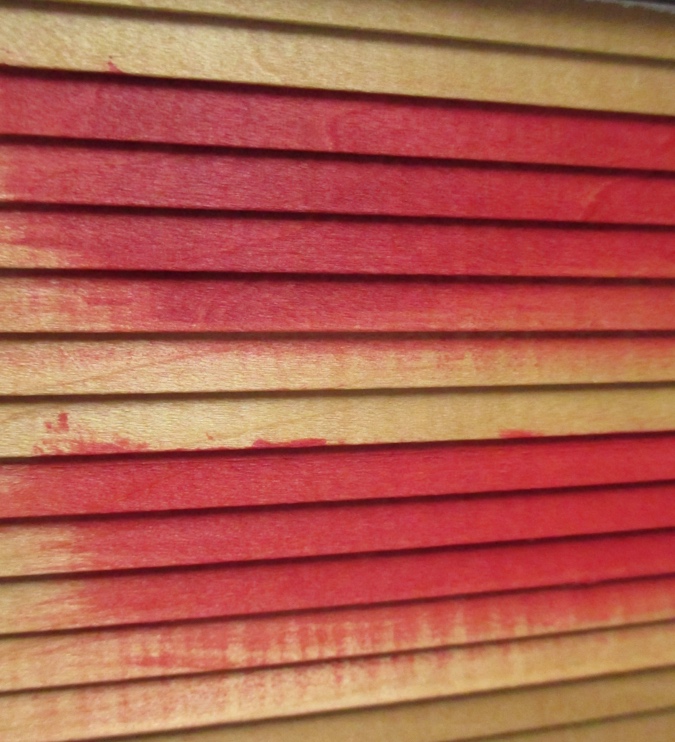 First I removed the three hinged wall panels to make painting easier. While I was at it, I had noticed that two of the screws in the roof hinges are straight and all the rest are Phillips head. This bugged me, so I decided to fix them. 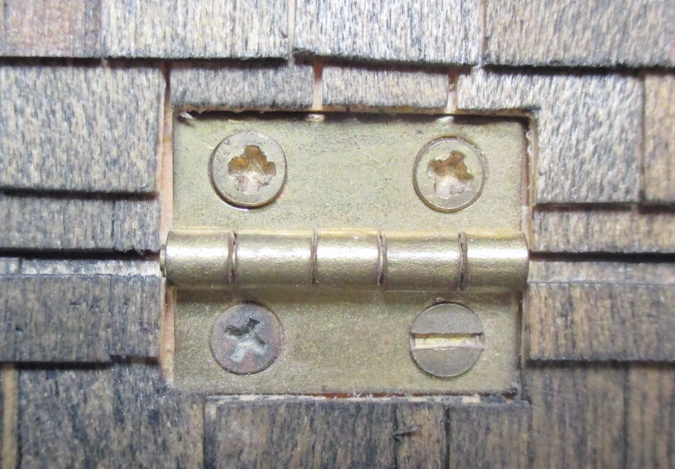 I found this out the hard way: by screwing in a new screw and then wondering why the roof panel wouldn’t open. (Because I had screwed it into the wall!) The straight screws are shorter than the Phillips heads, so they don’t have this problem. 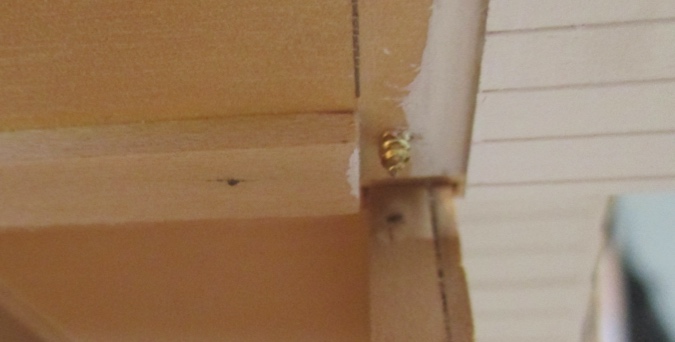 But that wasn’t the only screw problem. A couple of them are stripped out and trying to get them out only made the problem worse. I’ll sweet talk Geoff into helping me drill them out. 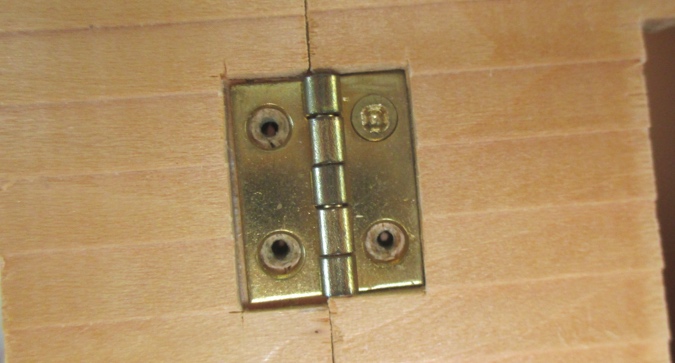 With the panels removed, I started painting. The builder used glossy white paint on some of the trim pieces. I don’t want any glossy white trim on this house, so I will either paint over it or cover it up with other trim as I go along. 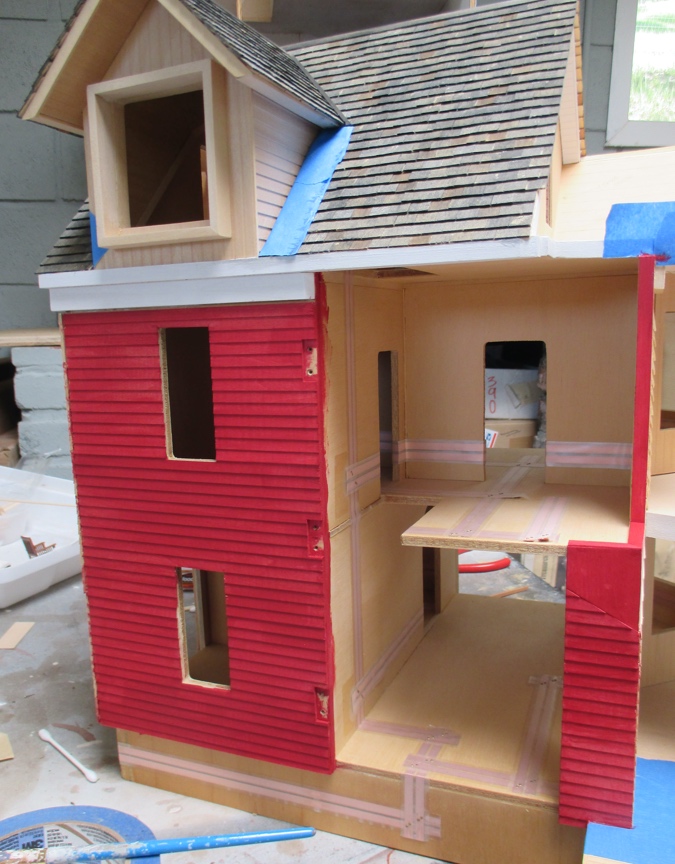 The hinged roof panel won’t stay open on its own. I could have removed it when I was messing with the hinges but it didn’t occur to me at the time. I was able to prop it open using clamps. 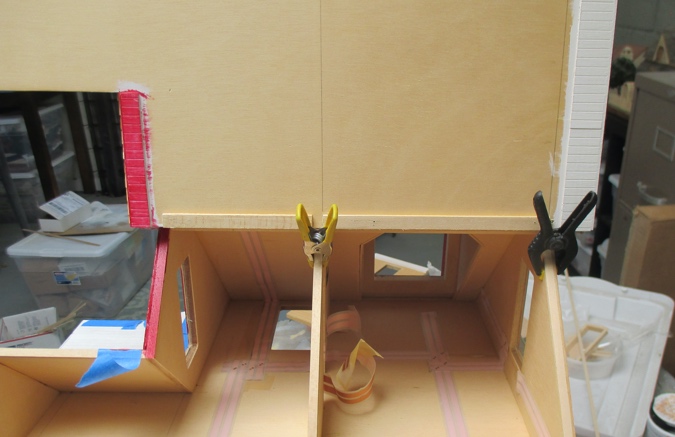 The glossy white paint is hard to paint over. Also, the shingles extend over the edge of the roof by about 1/8″, and I don’t want to get paint on the underside of the shingles by trying to paint that trim. (I also haven’t stained the undersides of the shingles yet, because I was concerned about getting stain on the trim…) I think the solution is to paint strip wood and then glue that over the white trim. 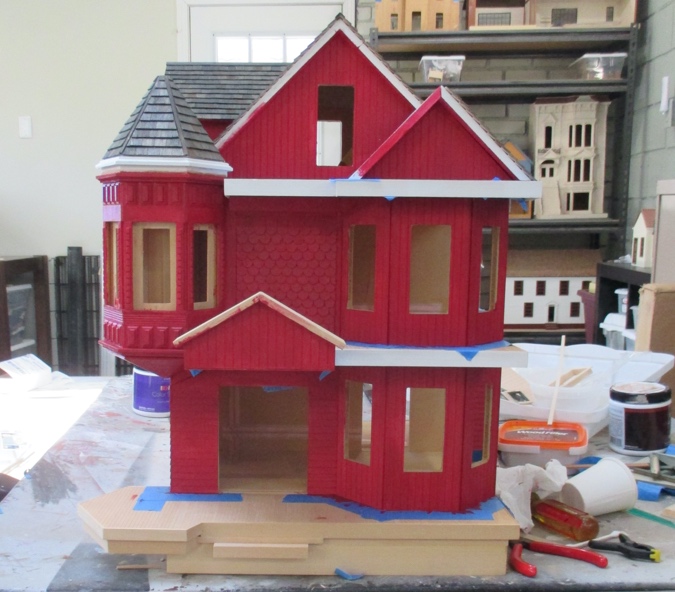 My dark blue trim color is Behr Blackberry Cobbler. I’ll talk about trim in my next post, but here’s a sneak peek. 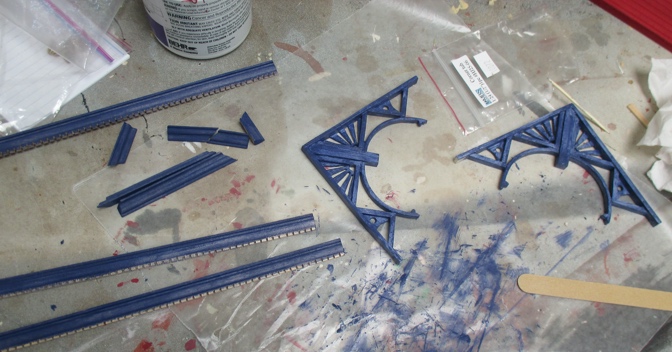 I wasn’t sure what to do with the turret so I started by painting the whole thing red. Then I started playing with gold accents, like in the inspiration picture. 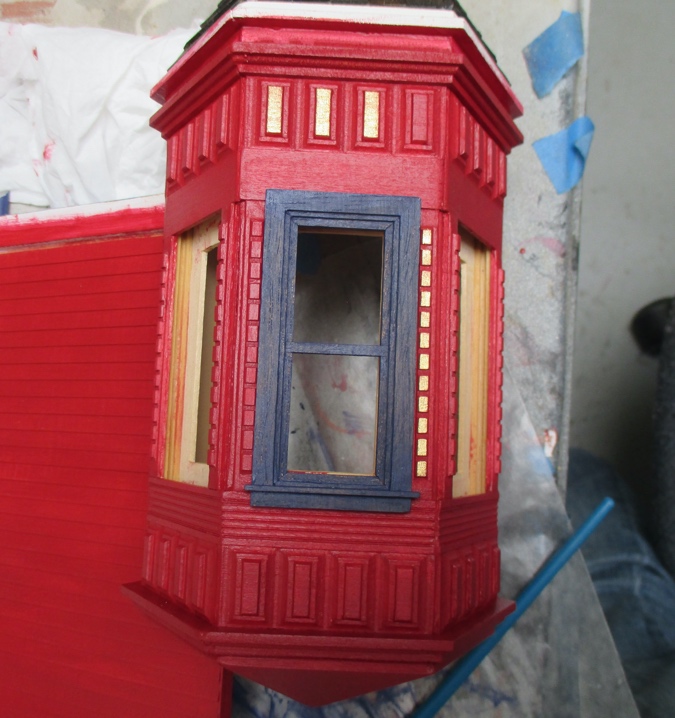 It seems like there should be some blue on the turret but I’m not good enough at detail painting. If I had built this house, I would have painted some of this trim blue before gluing it in. I am going to try to go over the crown molding with blue, but first I need to get some chisel paintbrushes so it’ll be easier to paint straight lines. 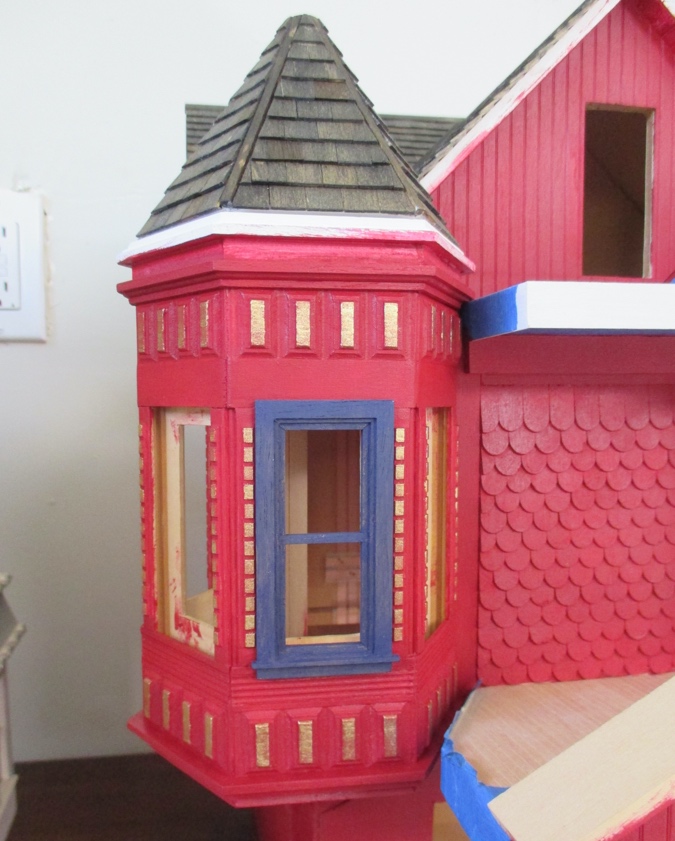 This house came with Victorian windows for the turret. I planned to use plain windows instead, but now I’m leaning toward the Victorian windows again. The blank space above the window really needs a pediment to fill it up. 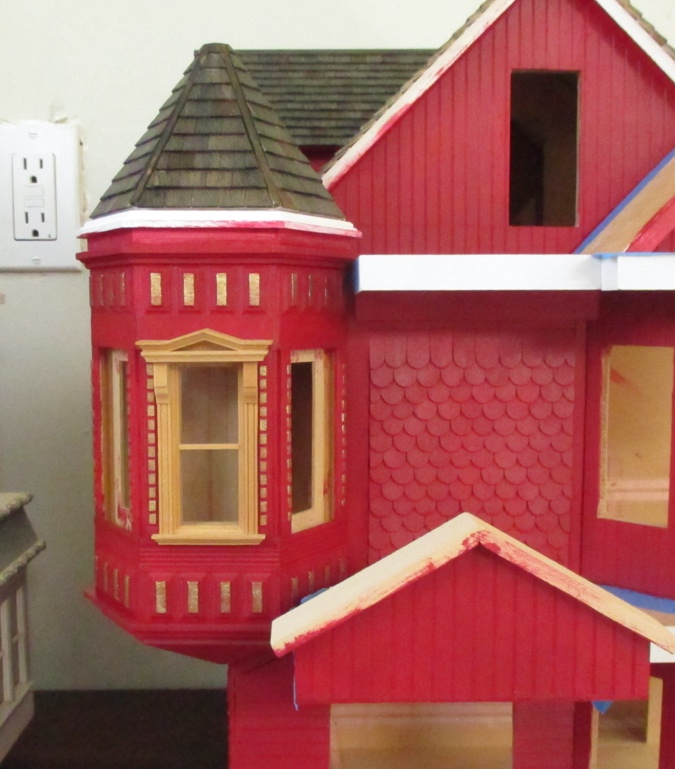